“What lies at the depths of the ocean?” A question that scientists have been asking for centuries, and still ask to this day. In the deadly clutch of the ocean’s dark abyss, what luckless creatures are cursed with never seeing the light of day? To attempt an answer to these questions, a number of deep-sea expeditions have been launched to better understand this deep, dark, alien world… We bring you six of the most influential: 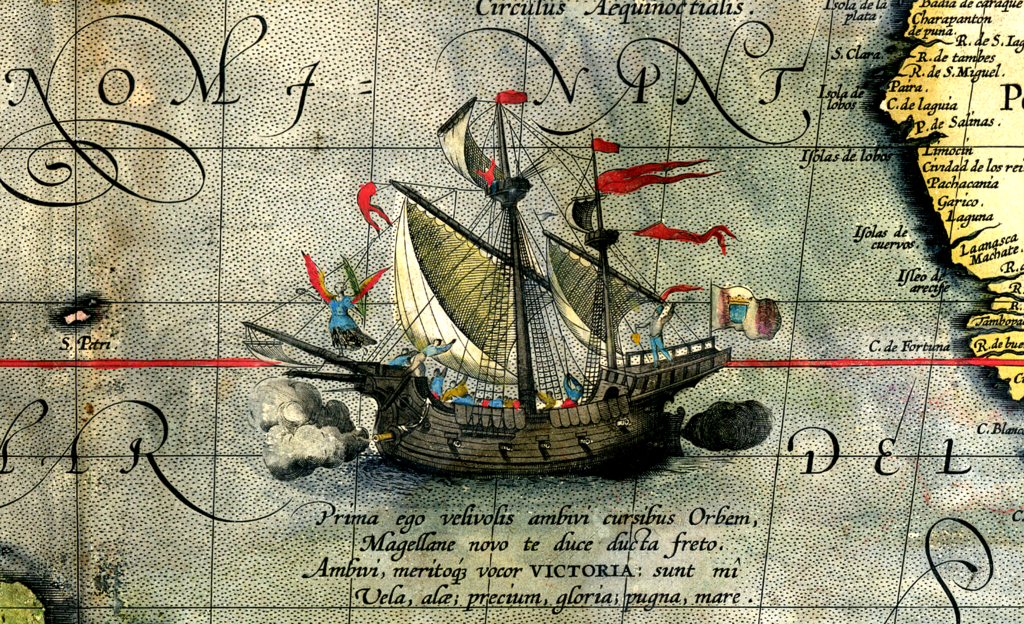 Dropping a penny down a wishing well and waiting to hear it strike the bottom, if you can do the math, is a credible method to calculate the well’s depth. In a similar fashion, to calculate the depth of the Pacific ocean, Portuguese explorer Ferdinand Magellan tried to measure the depth by dropping a cannonball-weighted line, but did not find the bottom. This process, called sounding, meant a ship’s crew would throw out weighted, measured amounts of line, called sounding line. As the line sank, the crew would record the measurement of the line’s length and how far it dropped. After lowering the cannonball 732 metres without hitting the bottom, Magellan declared the Pacific as immeasurably deep.

Michael Sars, a Norwegian theologian and biologist, set out in 1850 to dredge a part of the ocean near the Lofoten, an archipelago in Norway. Eight years before the expedition, the British zoologist Edward Forbes had issued a series of articles on biogeography, claiming that no animal life could exist at depths greater than 550 metres. As a result of one of Sars’ dredging expeditions, he disproved this theory by pulling up a live stalked crinoid (sea lilies and feather stars) from a depth of 800 metres. This spurred academic interest in the deep sea and prompted the Challenger expedition (see below) and other similar ventures around the globe. 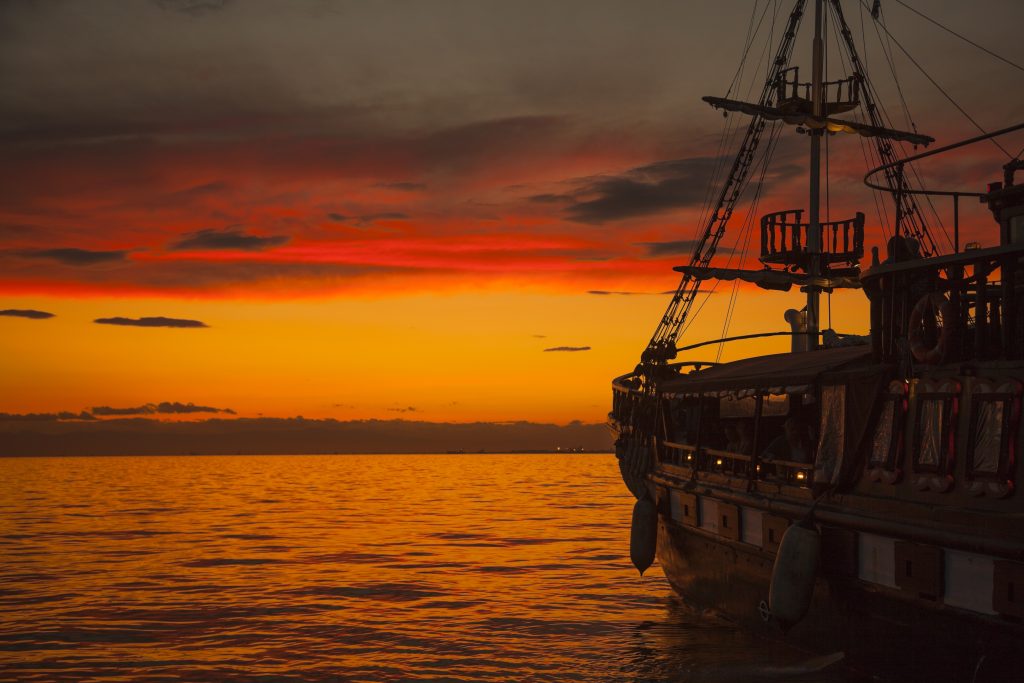 The Challenger expedition was a grand tour of the world covering over 100,000 kilometres organised by the Royal Society in collaboration with the University of Edinburgh. Charles Thomson was the leader of the large scientific team.

To enable HMS Challenger to probe the depths, all but two of the Challenger‘s guns had been removed and the spars reduced to make more space available. Laboratories, extra cabins and a special dredging platform were installed. The ship was then loaded with specimen jars, alcohol for preservation of samples, microscopes and chemical apparatus, trawls and dredges, thermometers and water sampling bottles, sounding leads and devices to collect sediment from the sea bed, and great lengths of rope with which to suspend the equipment into the ocean depths. The Challenger‘s crew was the first to sound the deepest part of the ocean, thereafter named the Challenger Deep. 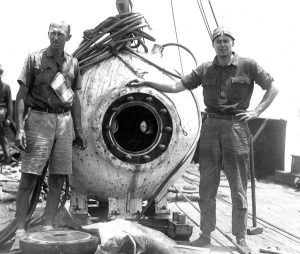 William Beebe and Otis Barton conducted their first test of the bathysphere in 1930, documenting deep-sea animals which had never before been seen in their native habitats. During these dives, they became the first people to observe how as one descends into the depths of the ocean, some frequencies of sunlight disappear before others, so that below a certain depth the only colours that remain are violet and blue. They reached a depth of 435 metres, where they observed jellyfish and shrimp in their natural habitat. The vessel would later go on to reach a depth of 923 metres in 1934. 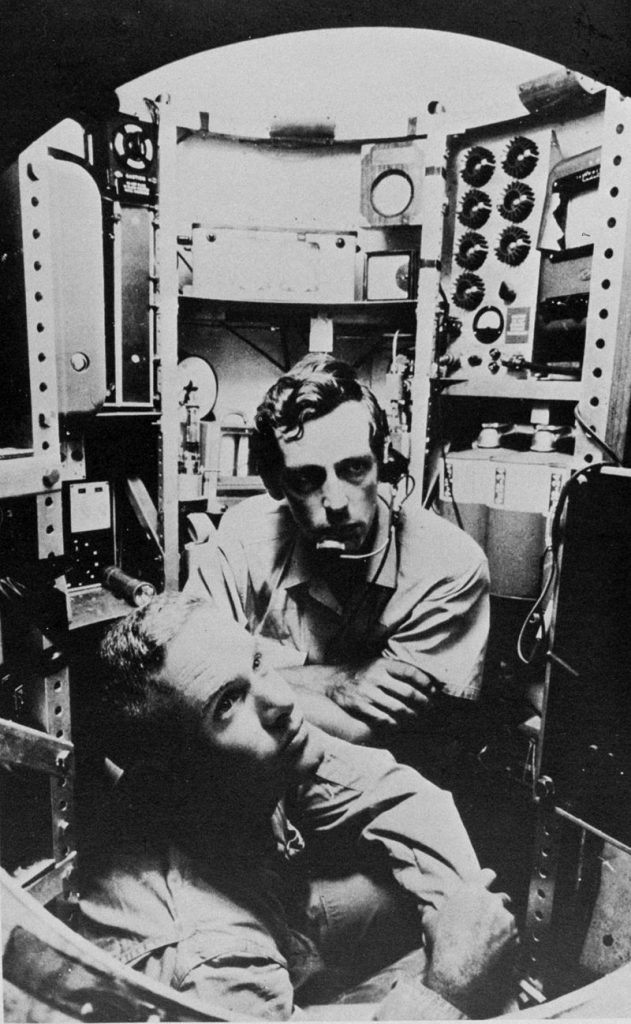 The Trieste, a deep-diving research bathyscaphe, descended to the deepest known part of the Earth’s ocean, the Challenger Deep – at the southern end of the Mariana Trench, in the Pacific Ocean. Jacques Piccard and Don Walsh became the first people to reach the near-bottom of the Mariana Trench, reaching 10,916 metres. The descent took just under five hours, and when at the bottom, they claimed to see fish swimming and recorded the seabed to consist of “diatomaceous ooze”.

James Cameron succeeded in tackling one of the Earth’s most testing challenges – reaching the bottom of the Mariana Trench – and he was the first to do it solo. In order to make this journey to the Challenger Deep, Cameron and his engineering team utilised revolutionary engineering and cutting-edge technology. The dive revealed many weird deep-sea species, one of the stranger finds being a sea cucumber believed to be a never-before-seen species. The research also revealed a previously unknown type of squidworm that is several inches long and lives in mid-water above the seabed. The endeavour has inspired many expeditions since. 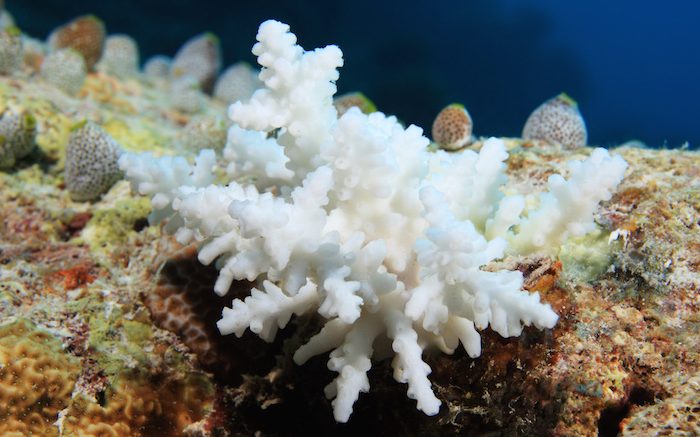 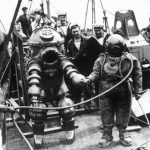