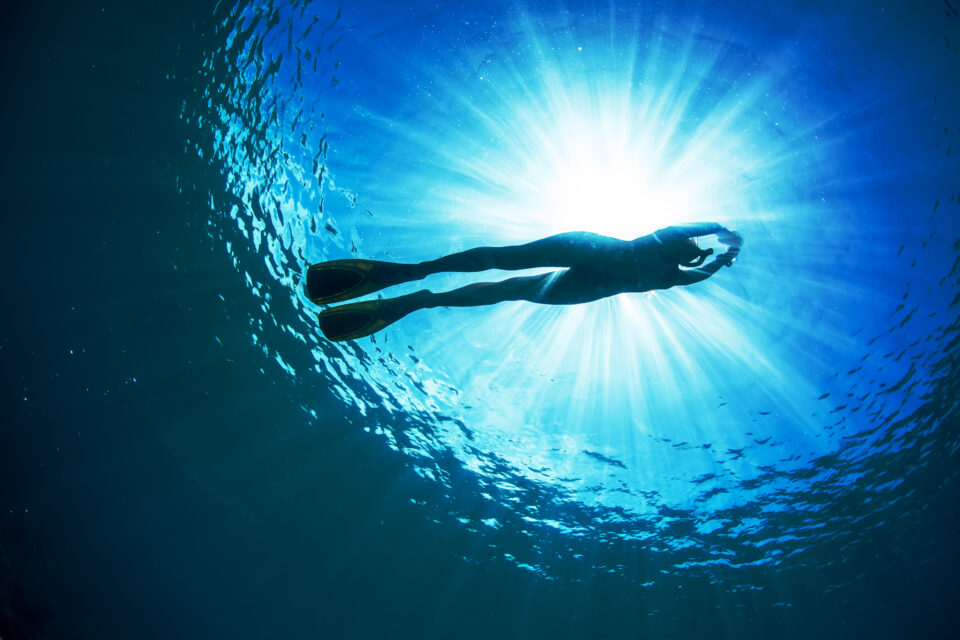 With diving equipment undergoing constant innovation, allowing us to dive deeper and longer underwater, it’s easy to forget that the art of diving began as a simple act of holding one’s breath. Indeed, with the advent of modern underwater breathing apparatuses, the most primitive form of diving is now differentiated by the moniker “freediving”. But breath-hold diving began over 8,000 years ago, evolving over the centuries to its ultra-modern, present-day form. Now, freediving is constantly testing humans’ physical and mental limits, as the sport of competitive freediving continues to gain popularity.

The first recorded evidence of freediving can be traced back more than 7,000 years to the Chinchorros, an ancient civilization that lived along the coast of the Atacama Desert (present-day northern Chile and southern Peru).

In a study of Chinchorro mummies, researchers discovered that the bones inside their ears started to grow across the ear canal’s opening, protecting the eardrums from repeated exposure to water. It was clearly a case of exostosis, a condition that afflicts. people whose heads have been frequently dunked underwater. Colloquially called “surfer’s ear”, exostosis is a common condition among people who surf, dive or kayak. Shell-ridden fossils and bone chemistry tests on the mummies have proven that their diet consisted of 90 percent seafood.

Besides the Chinchorro in South America, seashell fossils found on the coast of the Baltic Sea have also revealed that ancient people who lived about 10,000 years ago freedived for clams. There is also plenty of archaeological evidence pointing towards diving in Mesopotamia (present-day Iraq, Kuwait, and Syria), dating back to 4,500 BCE, as well as in ancient Egypt, to around 3,200 BCE.

The Greeks have been diving for over 4,000 years. Artefacts and scripts from the Minoan civilisation, which flourished from 2,700 BCE to 1,450 BCE on Crete and other Aegean islands, include figures of seashells as well as colors produced by seashells in Minoan ceramic art. 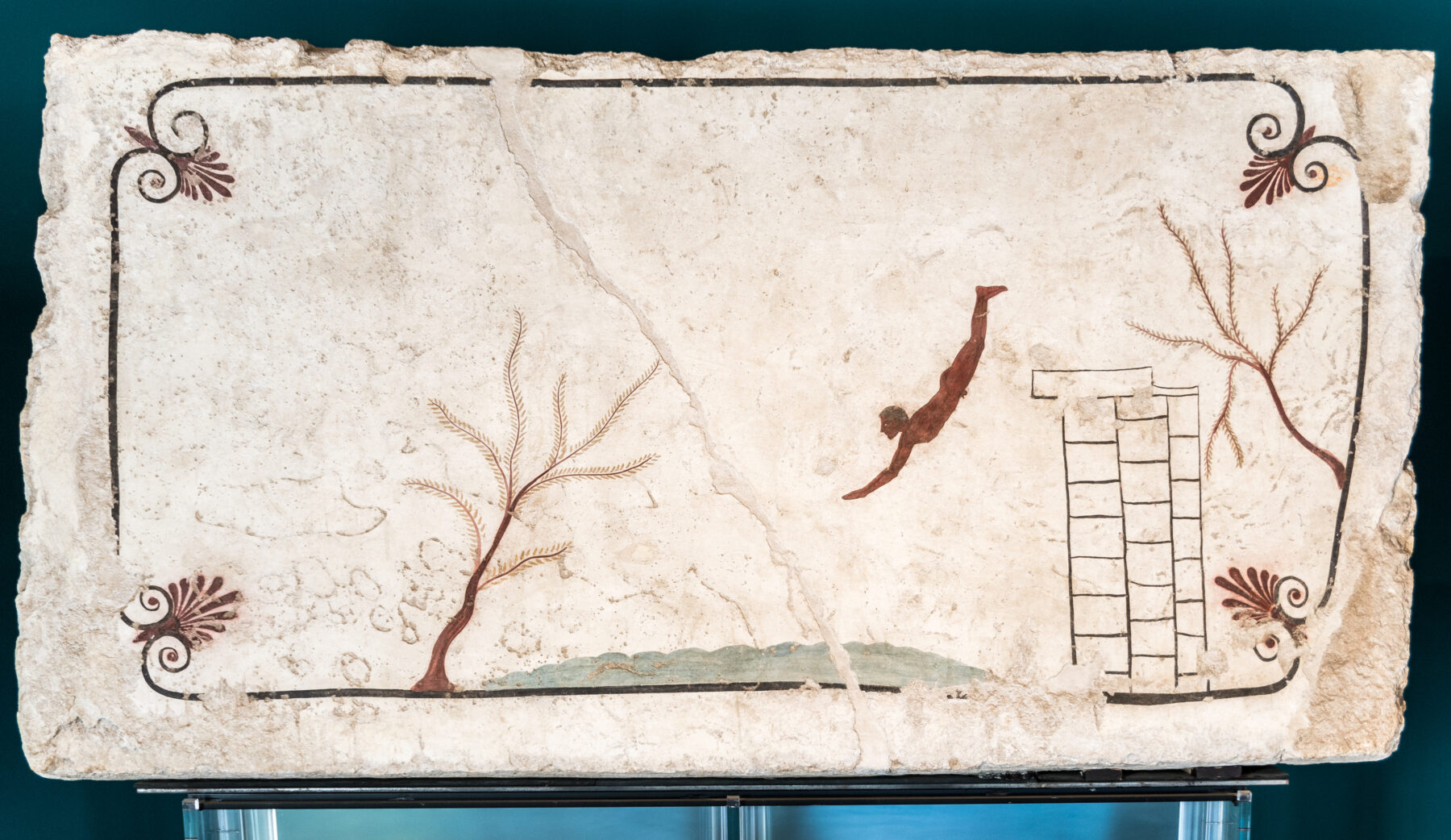 SRI LANKA (CEYLON)For thousands of years, the Gulf of Mannar, which lies between southern India and western Sri Lanka, was known for the pearls and chanks (large spiral shells) harvested from the waters of Mannar Island by local divers. According to the Mahavamsa, the historical chronicle of Sri Lanka, Prince Vijaya landed in Sri Lanka in 543 BCE and sent a gift of a shell pearl worth twice 100,000 pieces to a Pandu King upon taking the hand of his daughter. The ancient Greeks, specifically Megasthenes, the Greek ambassador to the Mauryan royal court in India, also wrote in the 3rd century BCE about the brilliance of the pearls from Mannar Iceland. In ancient Greece, Sri Lanka was known as “Palaesimoundu”.

Literature from the Sangam Period (3rd century BCE to 3rd century CE) such as the Agananuru, an anthology collection of classical Tamil poetic work dated around the 1st and 2nd century BCE, touched upon a community named Parathavar that fished but also dived for pearls and chanks. Arab traders and divers from the Persian Gulf also ventured into the pearl fishery trade in Sri Lanka between the 7th and the 13th century CE. 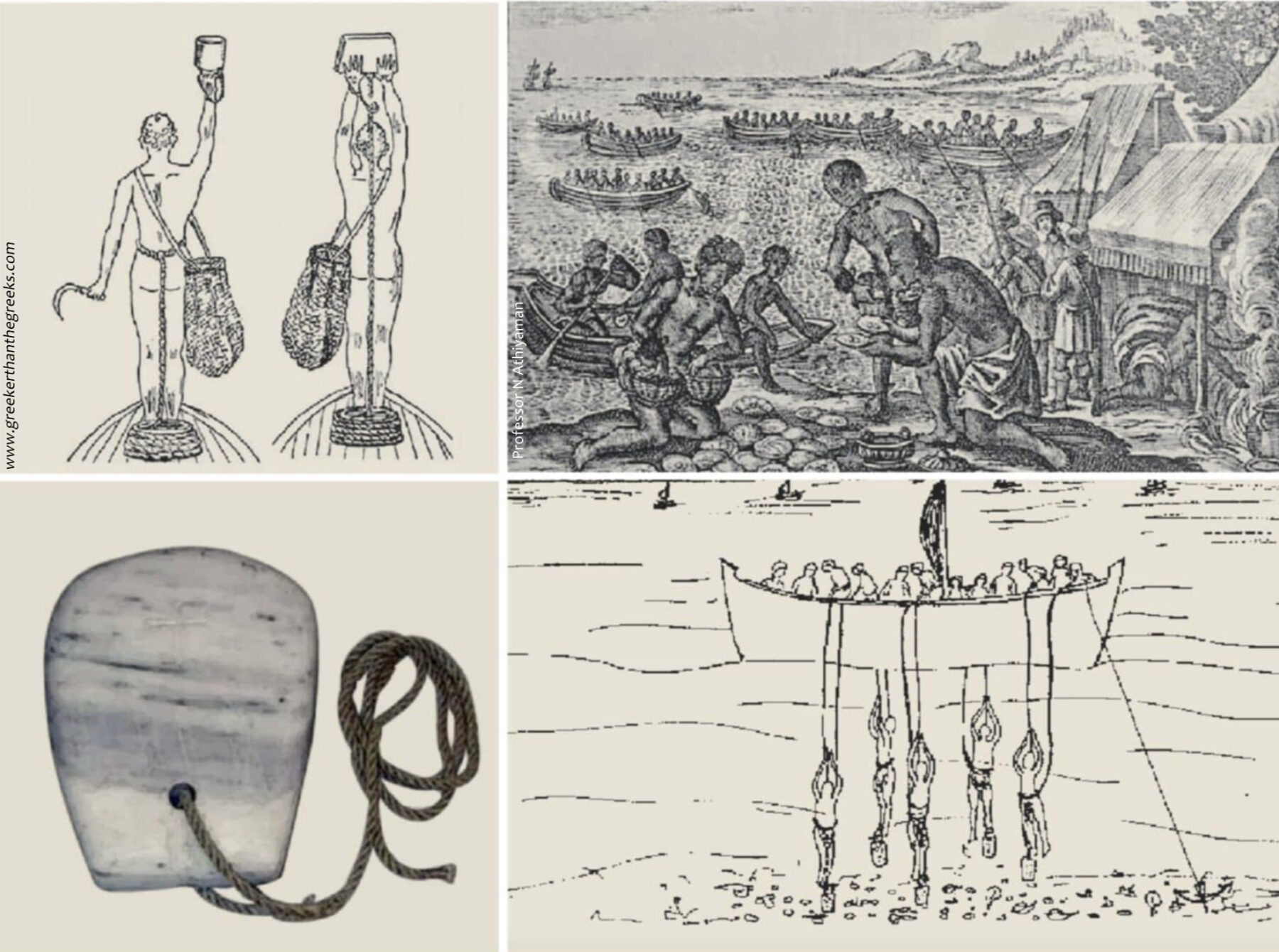 | Clockwise from top left: Greek skin divers with scythe, collecting net and skandalopetra; in Sri Lanka, temporary huts were built along the coast to store the pearls before they were cleaned and sorted; weighed down by stones, divers descend rapidly while their assistants wait to pull the stones back up; a skandalopetra, a centuries-old Greek sponge diver’s weight

Research detailed that the early divers of Sri Lanka would go out to sea in crews as large as 23 in a boat. On each boat would be a tindal, or a steersman; a saman oattee, who was in charge of the boat; a thody, who was tasked with bailing water out in addition to cleaning the boat; 10 miscellaneous including the adappanar, or lead diver; and 10 munduck, or operational assistants. They would pull up the oysters, the stone counterweights and the divers themselves from the seabed and back onto the boat.

The boats would be set out late at night, around midnight. The tindals would have begun preparing to hoist the sails more than an hour or so before, with the adappanar hoisting a light at the masthead as a signal to set off. The divers on the boat would then get ready in the early hours of the morning by attaching the safety ropes around their waist. Stones would be tied to the ropes to act as counterweights for the divers to make a fast descent to the seabed. As the ropes with the weights were released into the water, the diver would take a deep breath and rapidly descend by stepping onto these weights. The moment they reached the seabed, they would start collecting oysters into the nets around their waist, while the weights were simultaneously pulled up to the boat. After about a minute, the diver would tug the rope that was tied to him to signal the completion of his task, upon which he would be pulled up along with his collected oysters.

The ama are coastal people residing in Japan who make their living by diving to harvest abalones, turban snails, oysters, and pearls. Japanese literature suggests that the ama have existed for at least 2,000 years. One of the oldest references to the ama divers is the Gishi-Wajin-Den (M), which is believed to have been published in 285 CE. Some of the oldest archaeological evidence from Japan holds that the Japanese have always depended on seabed resources for sustenance. 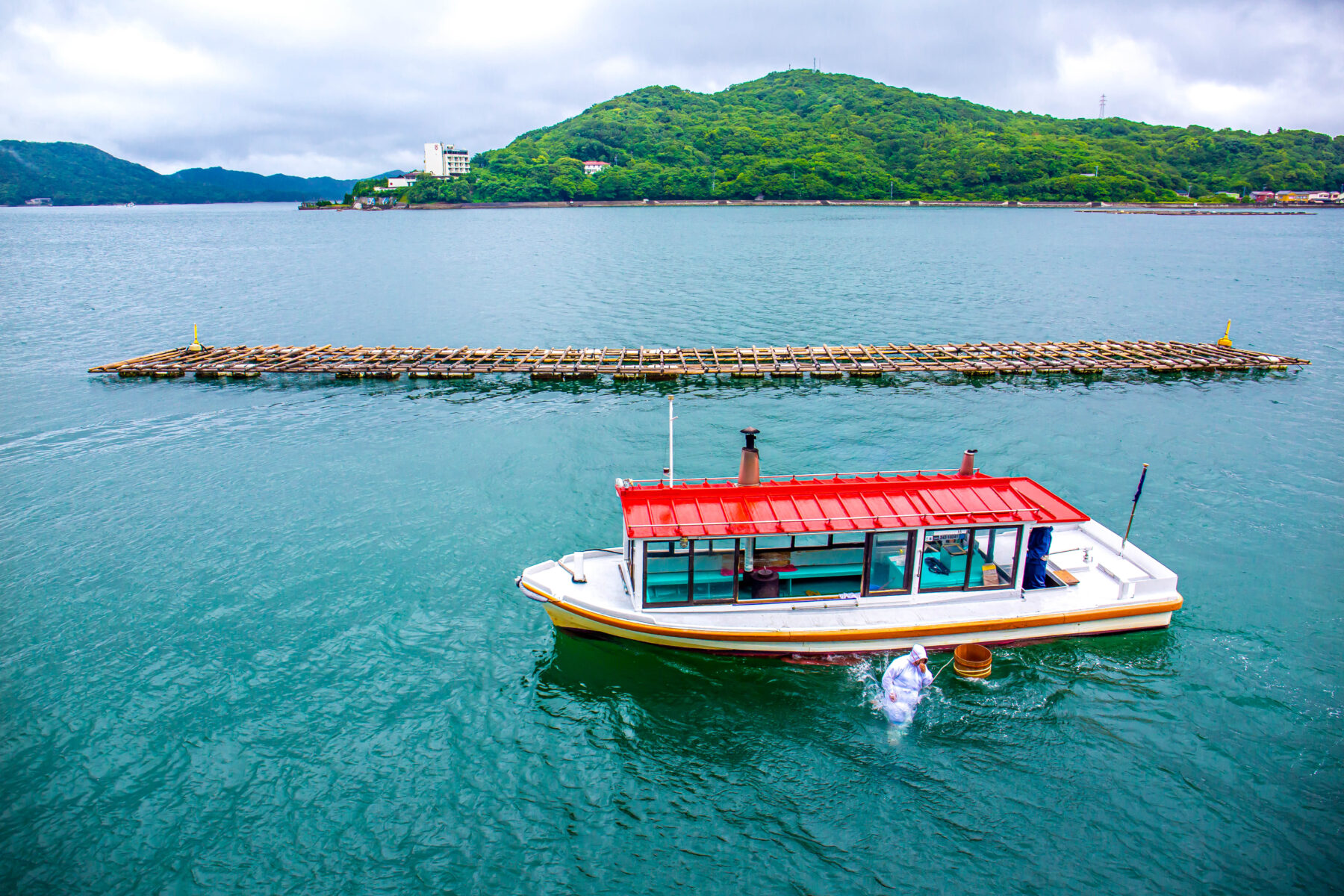 According to an ancient Chinese chronicle containing sporadic references to Japan, the northwestern part of what is now Kyushu lacks arable land that enables its people to survive on agriculture, compelling them to depend on the sea to barter for staples such as rice. According to Minoru Nukada from the Department of Health and Physical Education at Toho University, male and female ama engage in different diving activities.

Originally, male ama tended to catch fish, either by hand or with a spear, whereas female ama would dive to the seabed to collect seaweed and shellfish. Over time, the men engaged in offshore fishing or became sailors on ships while the female ama stayed at home and dived to supplement the farming harvest. They are also believed to be more adept at holding their breath. The ama are trained as early as 12 or 13 years by the elders. At this stage of their training, they are known as Koisoso or Cachido and dive at shallow depths of only two to four metres.

Traditionally, the female ama dives into a fundoshi (loincloth) for ease of movement with only a tenugui (bandana) covering their hair. These headscarves are sometimes adorned with symbols in order to bring luck to the diver and ward off evil. They use a safety rope attached to a wooden tub or barrel that serves as a buoy to rest on between dives. The barrel is also used to store their catch. Their most important tool, however, is the tegane or kaigane – a spatula-like tool used to pry out abalone between the rocks on the seabed. The Meiji era (1868 1912 CE) introduced goggles, which were adopted by the ama. In the decades following World War II, some ama started wearing a white sheer garb for modesty while others started wearing black rubber wetsuits in the 1960s. 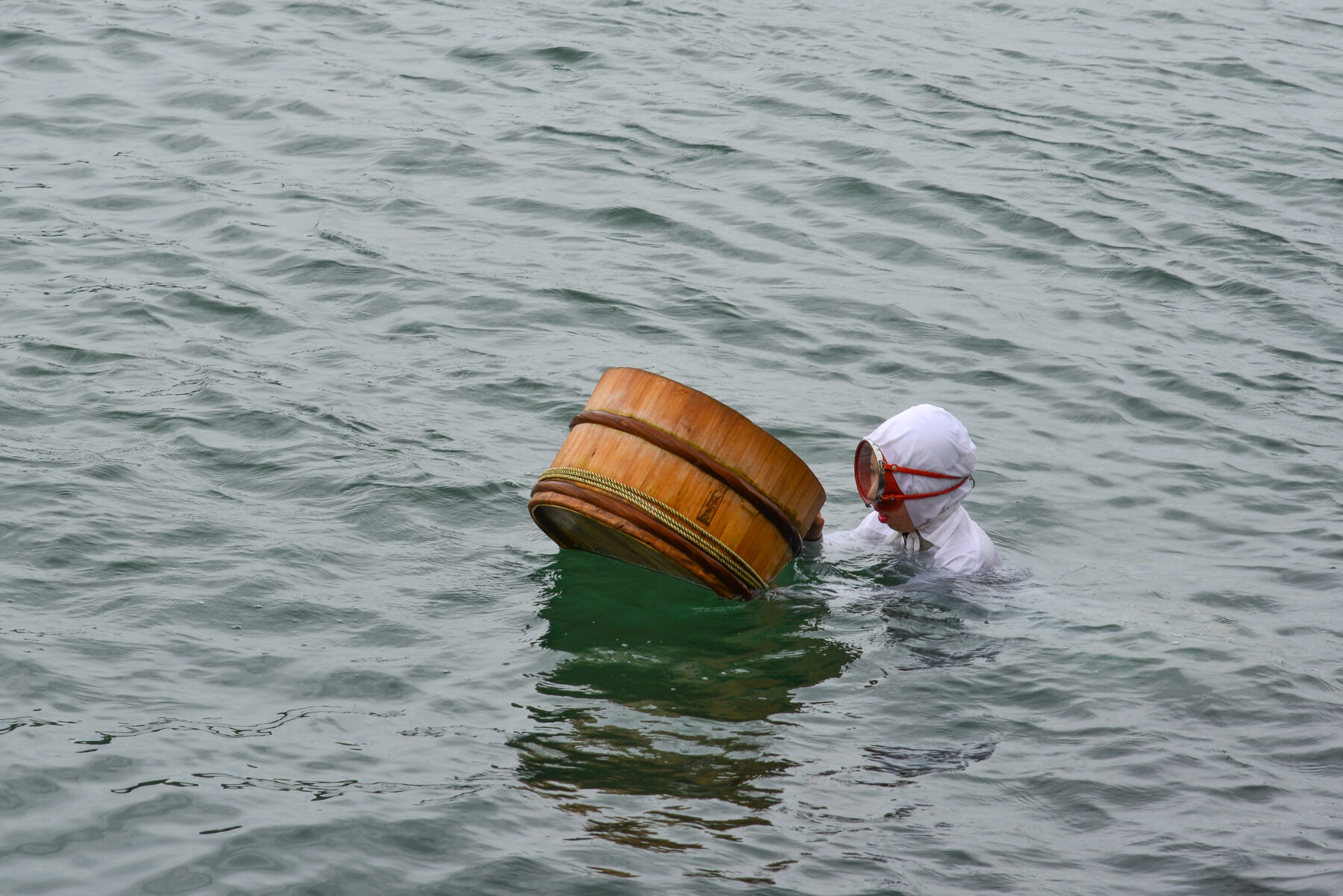 Like the ama of Japan, the haenyeo of Korea are women freedivers who make a living from diving and harvesting shellfish and seaweed from the seabed. The haenyeo are found in the southern part of the Korean Peninsula, particularly Jeju Island. Although the exact conception of freediving in Korea is unclear, Korean history experts collectively agree that Jeju was the place where the haenyeo were first found. Archival records reveal that as early as 434 CE, pearls were found in the Silla Kingdom. Again, it is not known how freediving for seafood came to be a female-only activity. One likely explanation is the physiological advantage that women have. This is greater subcutaneous fat and a perceived ability to withstand the cold better than men. Like their Japanese counterparts, the haenyeo start learning to freedive in shallow waters at 11 or 12 years old and as their skill level progresses, they graduate to an advanced level when they turn 17 or 18. 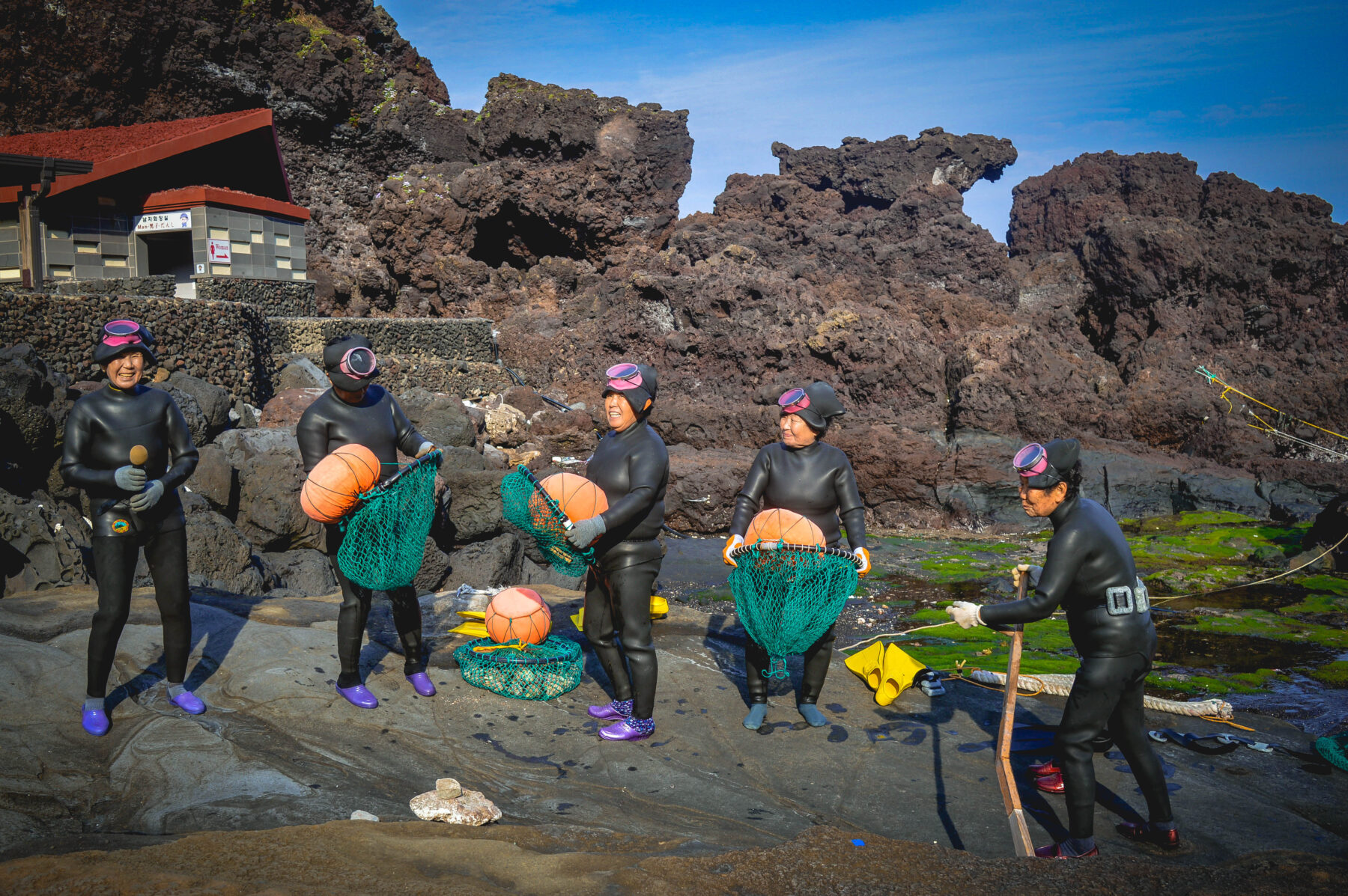 Jeju ‘haenyeo’ divers sing their traditional work song “Ieodo Sana” before they set out to dive near Seongsan Ilchulbong. 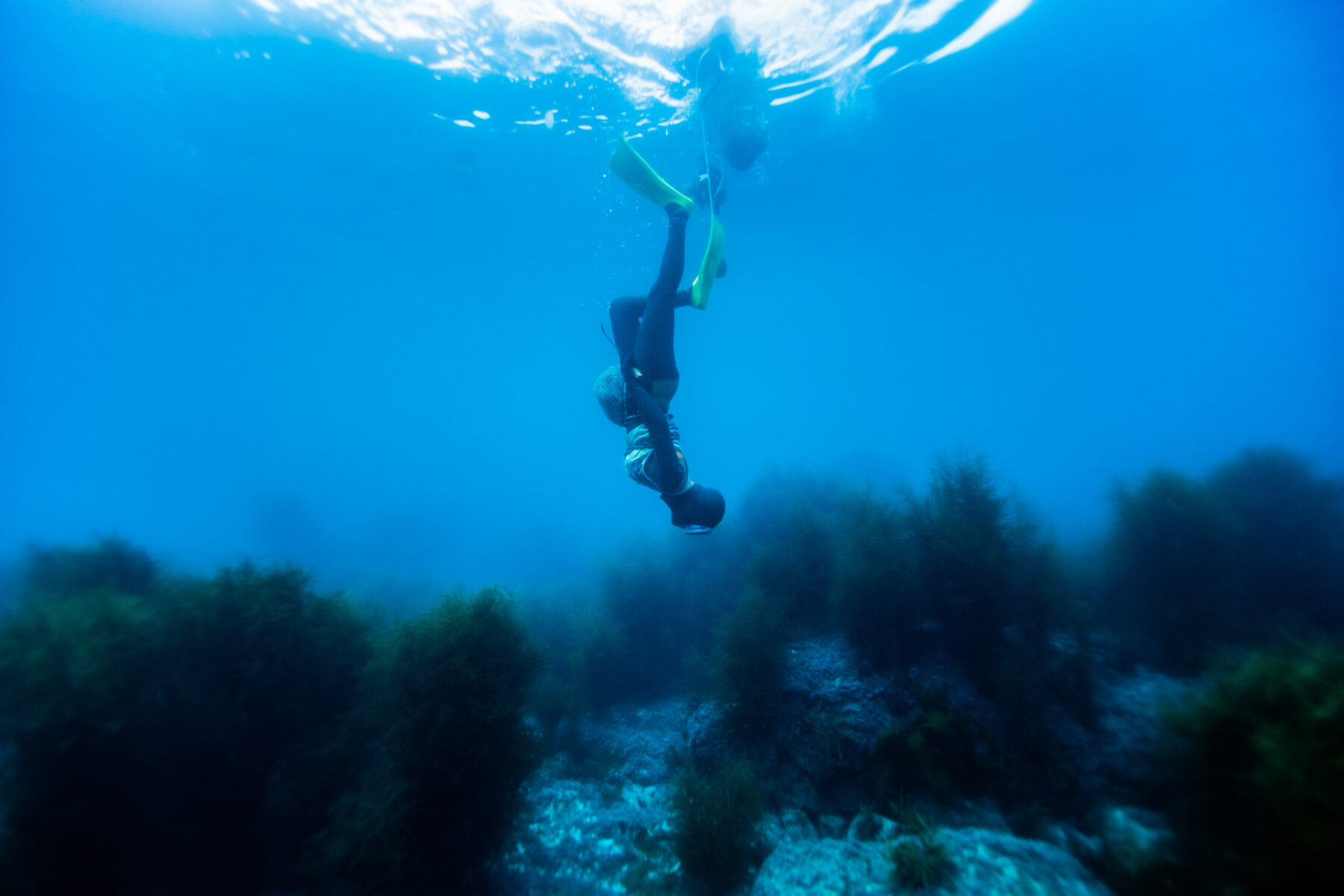 A haenyeo who takes an underwater shoot in Chuja Island, Jeju Island.

All freedivers are familiar with the “mammalian dive reflex”, when your heart slows down, blood vessels constrict and your spleen contracts because your body is trying to keep you alive while you are holding your breath underwater.

The Sama-Bajau are a group of sea nomads consisting of several Austronesian ethnic groups who live off the sea in waters enveloping the Philippines, Malaysia, Indonesia and Borneo.

A study on human hypoxia tolerance published by the journal Cell revealed that a genetic mutation has allowed the Sama-Bajau to develop larger spleens, which makes more oxygen available in their blood while diving. With this oxygen boost, the Sama Bajau can freedive to greater depths of up to 70 metres, for as long as 13 minutes. In the human body, the spleen recycles red blood cells and supports the immune system. After previous studies revealed that diving mammals like elephant seals, otters and whales have disproportionately larger spleens, Melissa Llardo, the author of the hypoxia study in Cell was eager to find out if the same was true in humans. Her studies revealed that the median size of the spleen of a Sama-Bajau was 50 percent larger than that of the Saluan people, a related group on the Indonesian mainland. The Sama Bajau were also found to have a gene called PDE10A (which the Saluan did not have) that is thought to control a certain thyroid hormone that in mice is known to be linked to spleen size. 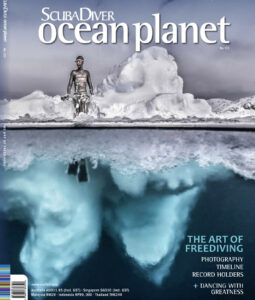 This piece is extracted from our annual photography edition, Scuba Diver Ocean Planet Magazine which is dedicated to the amazing world of freediving and the finalists and winners of the monthly submissions from the Ocean Gallery Vision 20/20. Seek out the art of freediving with a deeper appreciation for its freediving photography coupled with the timeline, history, and record holder. 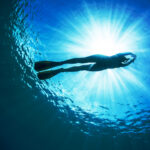