The Woman Who Freedives with Tigers

“You have to use your snorkel Lesley,” says Scott Smith persistently, suggesting that free diving with tiger sharks, but without a snorkel, is a not a good idea. “You need to be looking behind you when floating on the surface all the time.” I’ve returned to shark lover’s paradise, Tiger Beach in the Bahamas, on another photographic expedition on board the Dolphin Dream, owned by Scott. I’m here for two weeks, working on gathering images and footage for a new video and a book project for the AfriOceans Conservation Alliance – an organisation that I founded and run.

Last year, when I first swam with tiger sharks, I felt nervous before I got in. Put a tank on my back and throw me into shark-infested waters and I’m in heaven. I’d done a bit of free diving with blacktip and lemon sharks and learned that a mammoth camera housing between a mighty shark and me gives the feeling of a little protection, should the shark get too curious. But with no camera, no bubbles, and nothing but my bikini on, I did feel very vulnerable with the tigers.

I did it because I feel that I need to walk my talk as a shark conservationist, and make myself as vulnerable as possible, to show people that sharks are not what they perceive them to be. I’d already gone to extreme lengths in helping to raise awareness about the plight of sharks. To begin with, and where it all started for me, I met a very special shark named Maxine that was held captive in Two Oceans Aquarium, which changed the course of my life. She was the catalyst for packing up my well-paying corporate career and dedicating my life to shark conservation. Because of her, I designed a shark awareness programme and research project for which Maxine became the icon. 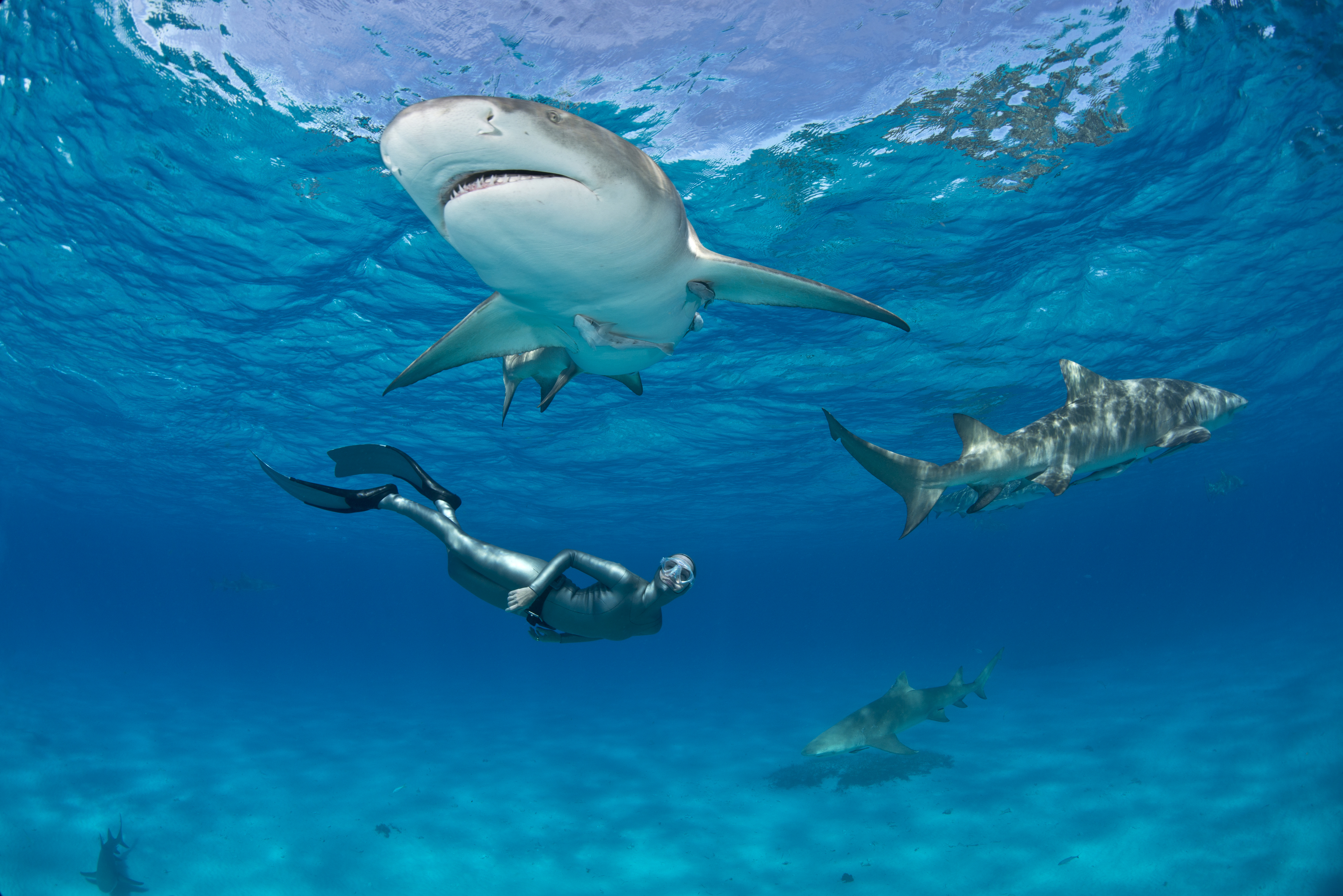 Just below the surface Lesley joins some lemon sharks, whose yellowish colour give them their name; they aggregate in small groups and are most active at dawn and dusk. © Scott Smith 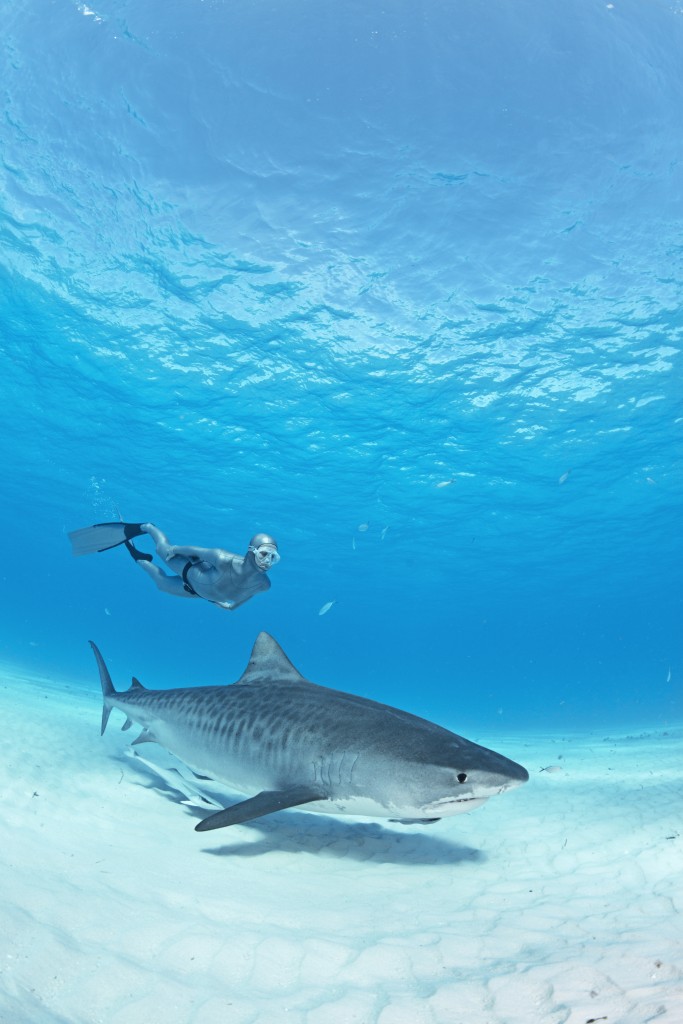 Lesley dived down a number of times to join this beautiful female tiger shark and swam beside her for over a minute at a time. © Scott Smith

After Maxine had spent nine years swimming around in circles, I influenced a decision to satellite tag her and release her back into the ocean. Maxine’s release was followed by the satellite tagging and releasing of other sharks she shared her tank with, as well as the satellite tagging of wild sharks, so we could compare their migration movements up our coast. This programme reached millions of people worldwide, and because of it, this aquarium does not keep sharks in captivity their whole lives anymore, but returns them after a few years and replaces them with newly captive sharks.

I had also boarded a shark longline vessel, filming and producing the award-winning Sharks in Deep Trouble. The film showed sharks being finned alive, shocking people worldwide. I had created numerous campaigns, including my Panda Award Rethink the Shark. I had even gone so far as to strip naked and tie myself up in nets for an anti-shark net campaign called Catches Anything, Kills Everything.

I knew the tiger shark images would be a powerful addition to my campaigning work – just a girl in a bikini with sharks all around her. But I confess, unlike all my other campaigns, this one put me out there and I was pretty nervous when I first got in. I was about to test my own words: “Sharks are not monster maneaters.” My misplaced fear dissolved into infinite turquoise the second I dived down to experience the simple joy of being free with the animals I love. It was then I caught the free diving bug and was determined to return with better skills one day.

Eighteen months later and I’m super-confident. Fear is alien now. Having trained with Trevor Hutton, South Africa’s most accomplished free diver, and my partner, I’m enjoying more bottom time with the sharks and loving the freedom only free diving brings. 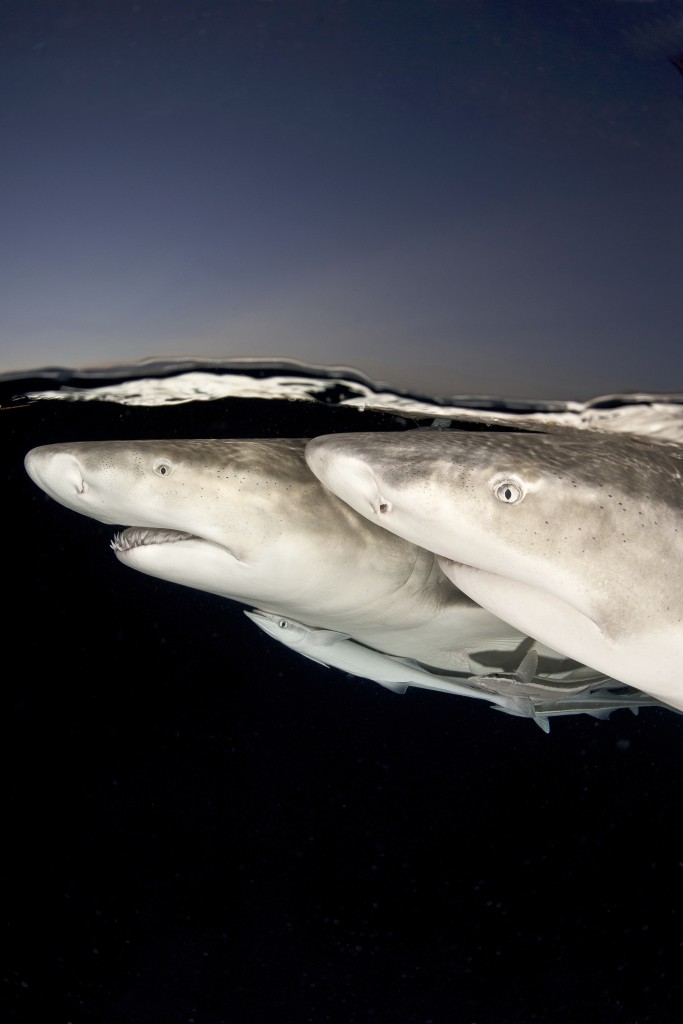 As the sun sets, the water turns an inky black, and there’s just enough light both above and below to allow the capture of this special portrait of two female lemon sharks. © Lesley Rochat

Tiger sharks’ sneaky behaviour is very familiar to me. I recall that making eye contact with one that was sneaking up from behind caused it to turn away. Mike Ellis, who took the free diving shots of me in the bikini, and who has spent hours underwater photographing the sharks, had it worked out: “What you gotta do is lie low on the sand, hide behind your camera and then when the shark comes close enough for the shot, quickly take the shot before she swims off.” It worked and I quickly mastered the art of getting the best shots I could of these beautiful creatures.

In my years spent diving with sharks I know it’s safer than sleeping in my own bed, considering the high crime rate in South Africa. I’m aware, however, that tiger sharks are often surface feeders, and sharks in general are very curious animals. The very, very small risk of a close encounter of the less-preferred kind is therefore higher when free diving than on scuba. After a tiger shark’s close inspection of my shoulder, I decided to pay heed to Scott’s advice. I put my irritating snorkel back.

I take in a breath and dive into the ocean’s familiar silence, down past some lemon sharks to greet a beautiful big tiger shark below. I’m concerned to see that she has a hook in her pectoral fin and another tiger shark has a hook in her mouth. Man’s destructive mark. It saddens me to know that although sharks are protected from commercial fishing in the Bahamas, recreational fishermen may still catch them.

Swimming beside this fine-looking animal I find the temptation too great, and I reach out to gently touch her. I must, however, remember the rules, and remember my place. I am a visitor in their domain that they graciously accept. Respect this and never get too bold or overconfident. They’re supreme predators after all.

I don’t handle bait or feed sharks and I do try to remember not to swim in the chum slick or down current. But after my hours in the water with all kinds of shark species, who have all been so gentle, it’s easy to forget that they have teeth, and big ones at that.

Freediving with the majestic tigers of the sea is a true privilege. The warm water on my skin and just the air in my lungs, her and me, side by side, surrounded by lemon sharks. I know I will do this till the day I die. Only about five people are killed by sharks each year. But if it’s God’s will that a shark takes me even with those slim chances, I’d still consider it the perfect way for me to go. 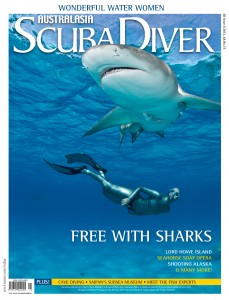 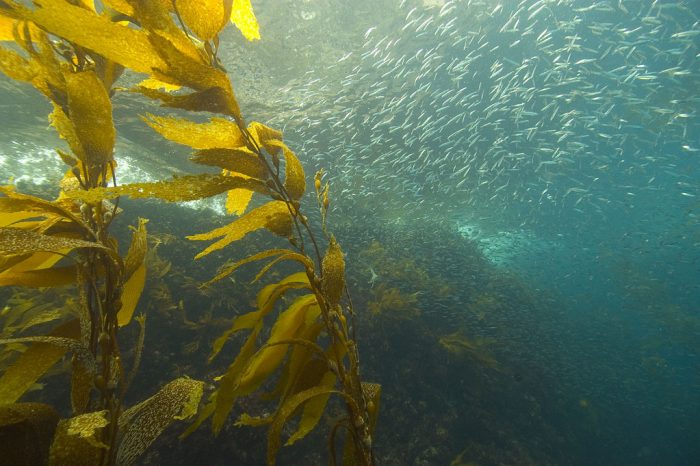 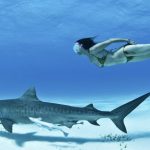 The Woman Who Freedives with Tigers