5 of the Best Places to Dive with Pygmy Seahorses

Masters of camouflage. Even when magnified through a macro lens to fit the page of a magazine, pygmy seahorses are tough to pick out due to the likeness in colour and appearance to their hosts. Now imagine divers searching for them in gorgonian sea fans over nine metres sub-aqua, and the whole ordeal becomes a champagne problem. Of course, the fragile nature and tiny size of these creatures means that divers have to be extra careful when searching – so no shaking whip coral like a martini to see if one pops out.

Dr. Richard Smith was the first person to complete a PhD on the biology of these delicate creatures. His own images of pygmies have shone a light on their existence, and the threats they face. UW360 approached the divine pygmy guru to ask him to select his top five places to dive with pygmy seahorses, and the types that you can see there:

Richard spent time at Wakatobi studying the populations of both Bargibant’s and Denise’s pygmy seahorses. Bargibant’s, Hippocampus bargibanti, was the first species of pygmy seahorse to be discovered. They reach almost 2.7 centimetres in length and are extreme habitat specialists – loyally spending their entire adult lives on a single gorgonian coral of the species Muricella paraplectana. Due to their relative conspicuousness compared to other pygmies, they are one of the most commonly observed of these species by scuba divers.

Denise’s pygmy seahorse – Hippocampus denise – can be found living on the lush coral reefs of Wakatobi’s underwater world. Closely related to the Bargibant’s, it similarly picks a host for it to remain clinging to for the rest of its life – growing to a maximum length of 2.4 centimetres.

Wakatobi is also one of the top places to see Pontoh’s pygmy seahorse, Hippocampus pontohi. One of the three species officially named in 2008, Pontoh’s is much smaller in size, reaching just under 1.7 centimetres in length from the tip of the tail to the snout. Its colouring is predominantly white with yellow or pink patches, and it is often found in shallower areas. 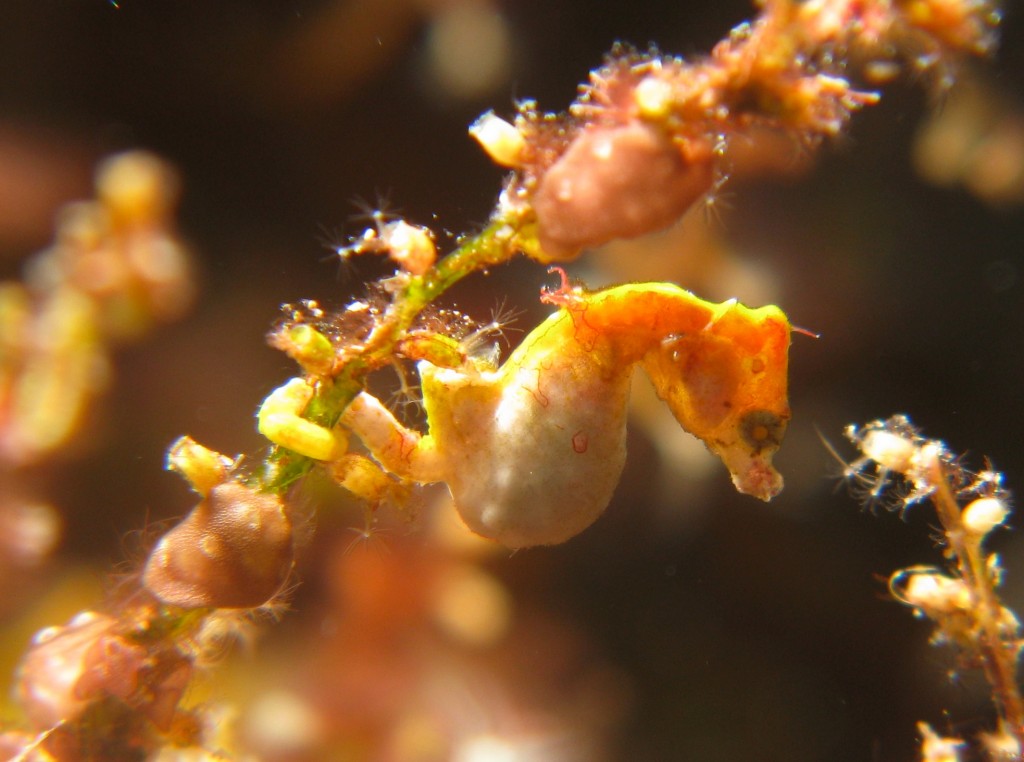 “Pontoh’s is much smaller in size, reaching just under 1.7 centimetres in length from the tip of the tail to the snout.” © Wikimedia Commons

This is the only place Richard has ever seen the rarer-than-rare Satomi’s pygmy seahorse. The world’s smallest seahorse, Hippocampus satomiae reaches a total length of less than 1.4 centimetres, but is nocturnal and very active. They can be identified by their incredibly small size, small black dot between their eye and snout, as well as orange filaments and markings on the back, tail and chin. Finding one here takes great skill, and a particularly meticulous eye for macro marine life. 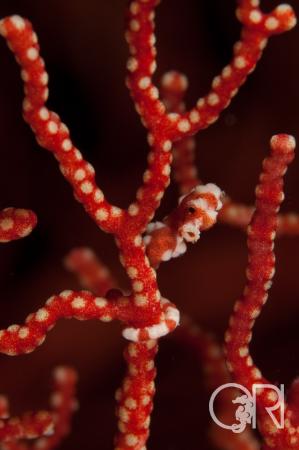 “With their tails wrapped around the limb of a gorgonian, looking like lifebuoys anchored to their host, these tiny creatures can be carefully studied, in particular their intricate skin textures that make them so hard to spot.” © Dr. Richard Smith

The red and white colour form of the Denise’s pygmy seahorse is common in the south of Raja Ampat. With their tails wrapped around the limb of a gorgonian, looking like lifebuoys anchored to their host, these tiny creatures can be carefully studied, in particular their intricate skin textures that make them so hard to spot.

Richard thought up four chapters of his pygmy seahorse thesis when diving with Denise’s pygmies here. The site is also likely to accommodate Coleman’s pygmies, although he has never seen them there. The Coleman’s pygmy seahorse, Hippocampus colemani, is believed to grow up to 2.7 centimetres in length – there has been little research on the fish so far.

Here you can find many Pontoh’s, Denise’s and Bargibant’s pygmies. Unfortunately, the destination is frequently visited by many divers, as Lembeh is famously considered a divine critter Mecca. When diving, please ask the guide not to touch the gorgonian or pygmy in any way.

Largely unspoiled due to its remoteness, the Solomons are home to the white colour form of Denise’s pygmy seahorse. Once again, you’re likely to come across Bargibant’s and the brown form of Pontoh’s – which used to be known as “Severn’s” and can be found in the slightly undercut areas, sheltered from direct sunlight.

We encourage divers to both discover and photograph pygmy seahorses, and to help raise awareness of the threats they face. Divers should take a great deal of care when diving with these delicate creatures. Allow these “Code of Conduct Guidelines” to help: 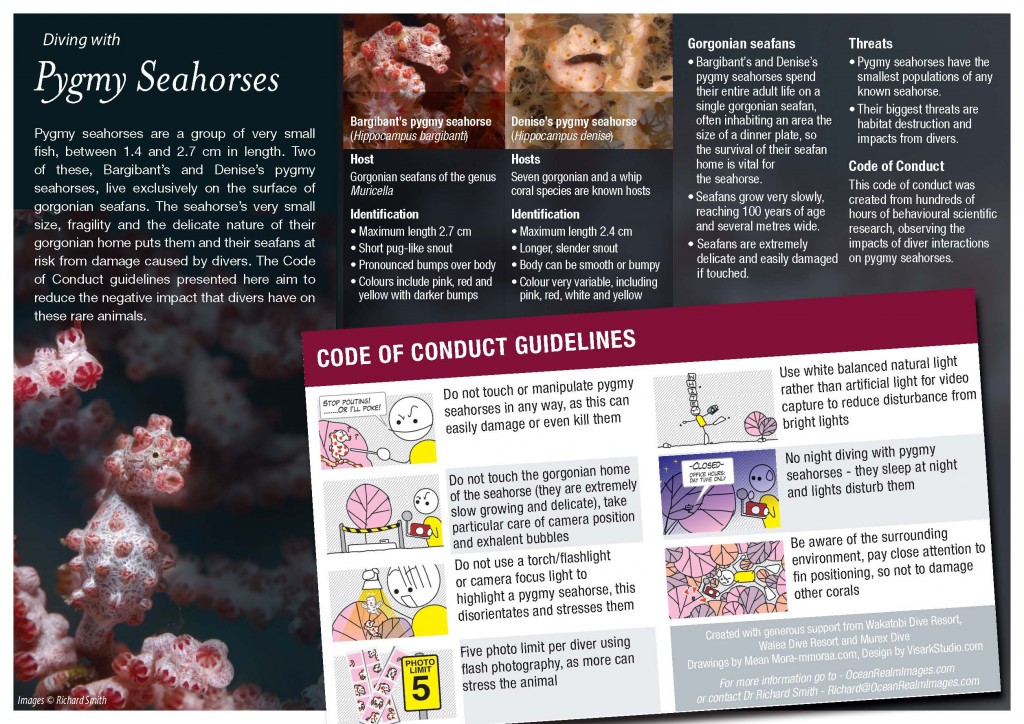 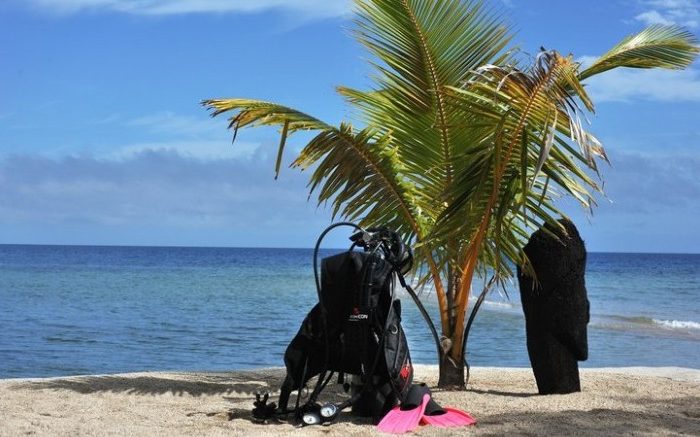 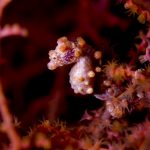 5 of the Best Places to Dive with Pygmy Seahorses