The variety of life on coral reefs rivals even the rainforest in its diversity. Dr Richard Smith explores why this is so, and meets some of the ocean’s amazing species. (Text and Images by Dr. Richard Smith) 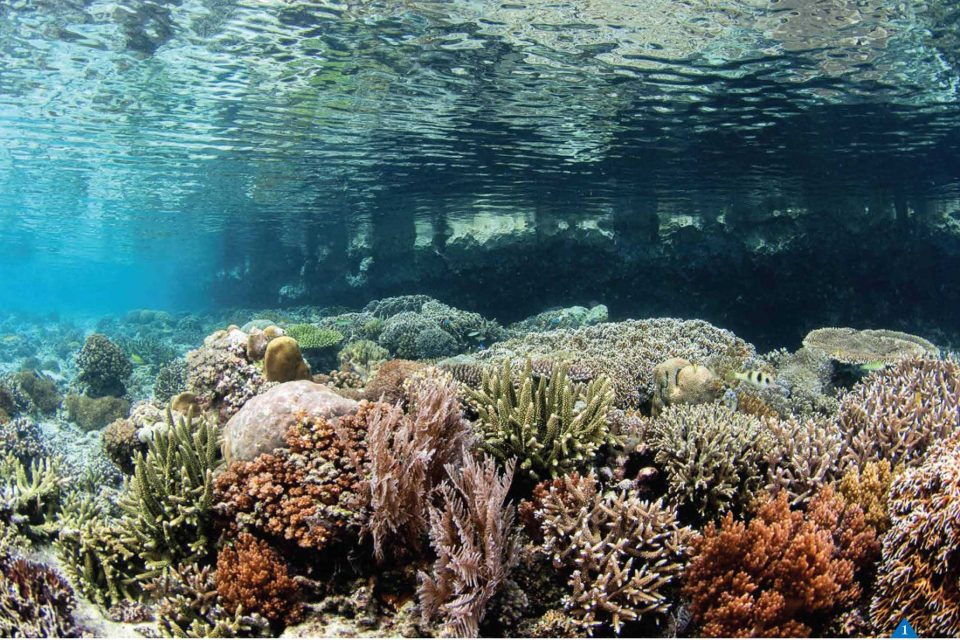 Coral reefs are places of enormous natural diversity. They accommodate some of the highest densities of animals on Earth and have more species than any other marine habitat. Coral reefs aren’t the only marine ecosystems that accommodate extraordinary creatures. Animals everywhere change over time to reflect the environmental conditions they find themselves in. Water temperature, availability of food and predators are just a few of the myriad factors that can influence the characteristics that are favoured in a population and passed on to the next generation. Throughout the Australasian region there are extraordinary examples of animals and their adaptations, many of which are high on divers’ wishlists.

THE CORAL TRIANGLE
The Coral Triangle is a region that holds the world’s richest marine diversity, and is home to more endemic species than anywhere else. Hawaii has 86 species of endemic reef fish, the Red Sea 41, New Caledonia 43 and the Great Barrier Reef 33. The Coral Triangle vastly outshines all these areas, with over 10 percent of its almost 2,500 species found only there. It is roughly triangular in shape, extending from central Indonesia and eastern Borneo, to Papua New Guinea and the Solomon Islands, and further northwards to the Philippines. As you travel in any direction from the Coral Triangle the number of marine species decreases. But why is this? There is some debate, but there are three leading theories. 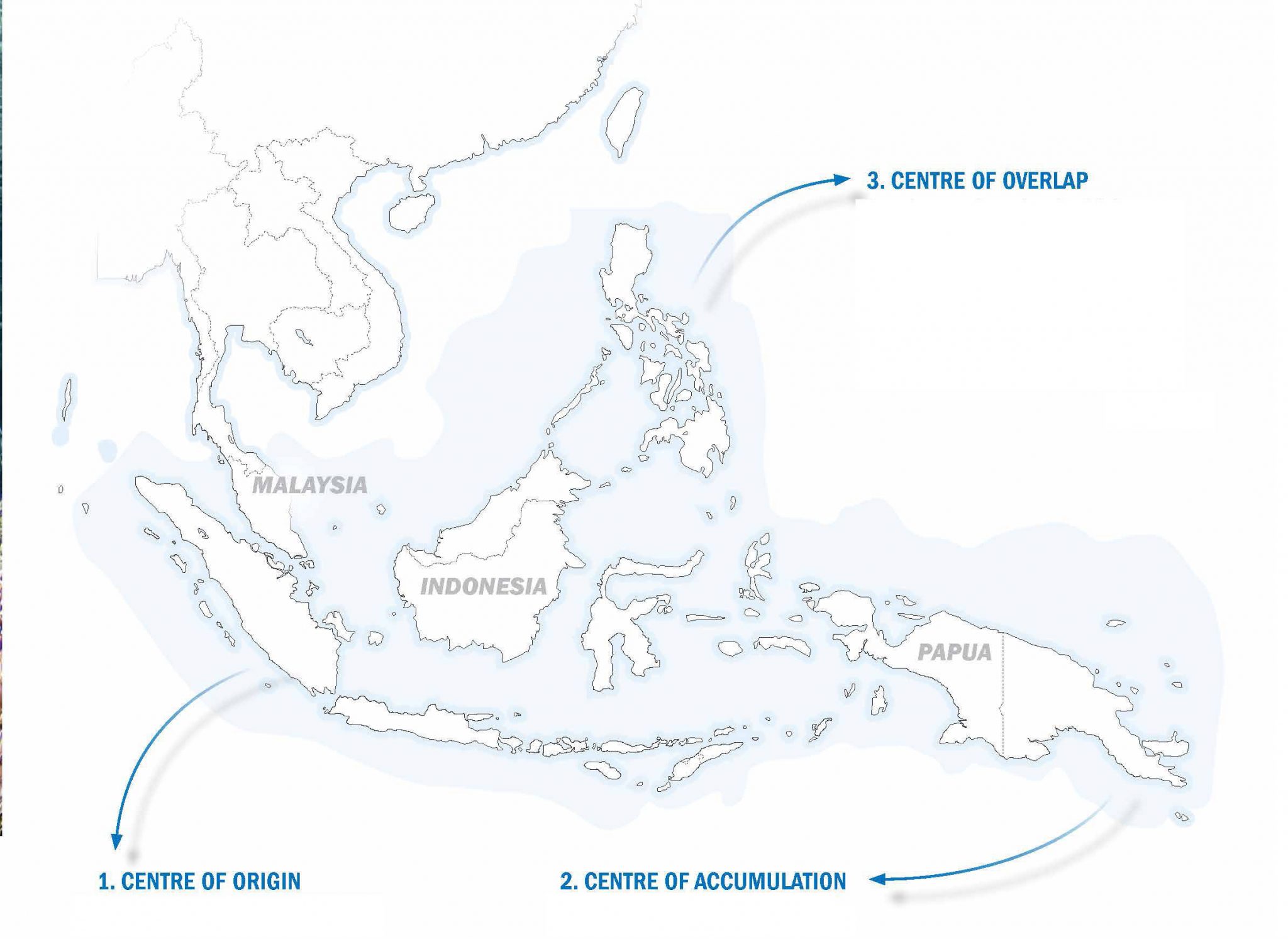 The earliest theory suggests that the Coral Triangle is a species factory, with many new species being created there adding to the area’s bounty.

The second theory posits that newly formed species from the Pacific and Indian Oceans end up in the Coral Triangle by drifting on ocean currents that converge there.

Another explanation for high biodiversity in the Coral Triangle is that the geographic ranges of many species from the Indian and Pacific Oceans overlap in the Asian archipelago, causing higher diversity where they coexist.

MARINE VS. TERRESTRIAL EVOLUTION
The processes of evolution on land and in the sea are somewhat different. We have all heard about the ancestors of Darwin’s finches and the giant tortoises arriving to the remote Galápagos Islands. Here, in isolation from their mainland counterparts, they evolved to suit the local conditions on their particular islands. Their isolation from other populations is key to these new species forming. Evolution through geographic isolation is common on land, where obstacles to the free movement of animals, such as rivers, mountain ranges, or seas, can easily result in a species’ isolation and eventual genetic differentiation. The stark boundary between animals of Asian and Australian origin through the middle of Asia inspired the famed “Wallace Line”. In the south, the line passes between the Indonesian islands of Bali and Lombok, which, despite being separated by just 35 kilometres, is enough to prevent the vast majority of birds and mammals from migrating across. The situation underwater, however, is rather different. Because marine animals usually have a planktonic larval stage in their life cycle, which floats around at the whim of ocean currents, they spread far and wide. As a result there are very few barriers to prevent them from reaching even the most remote atolls and many tropical marine species are found all the way from the east coast of Africa to the mid Pacific. On the whole, evolution through geographic isolation is much less common in the ocean than it is on land. Though of course there are exceptions…

Thousands of species inhabit coral reefs, each of which has formed over countless years and generations. There are some fascinating examples of speciation in the Coral Triangle and the wider Australasian region. 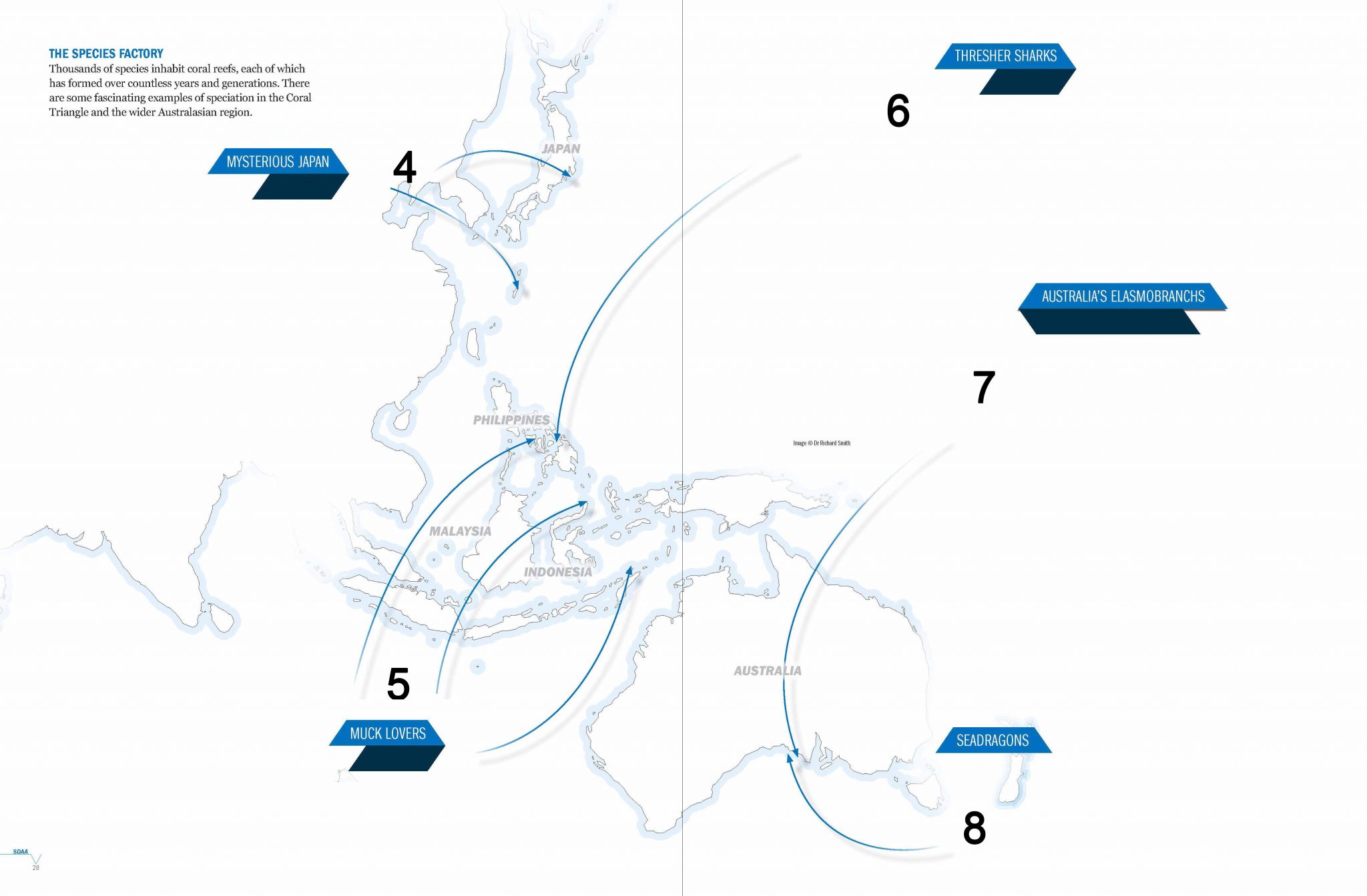 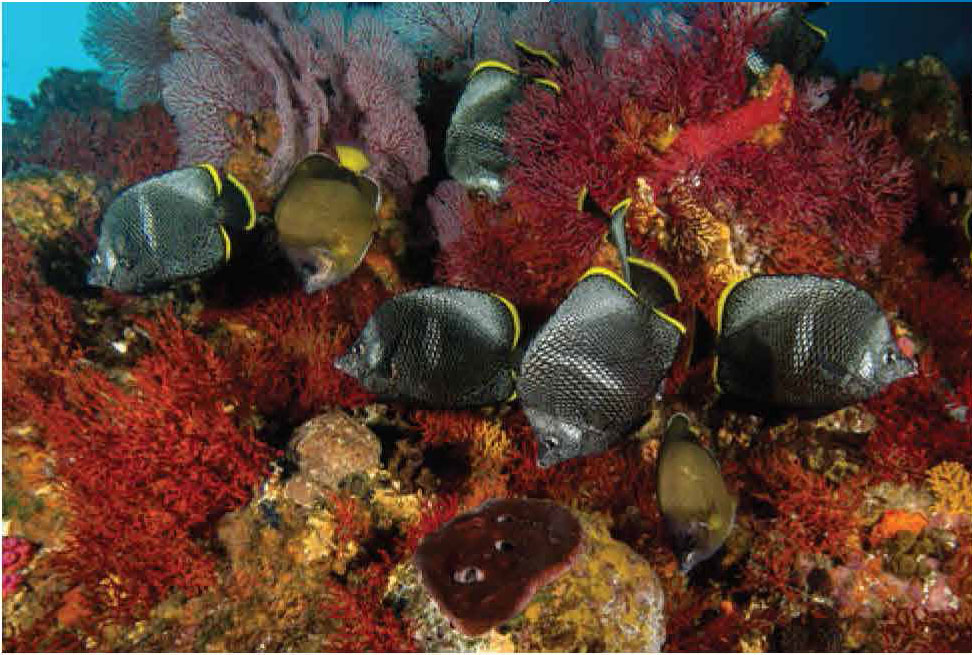 Japan’s warm temperate waters offer a microcosm of evolution rarely visited by non-Japanese divers. The southern islands around Okinawa are similar in species composition to the nearby Philippines, but as you head northwards there’s a shift. The Izu Islands just south of Tokyo accommodate the stunning wrought iron butterflyfish and undescribed Japanese pygmy seahorse that prefer these cooler waters. 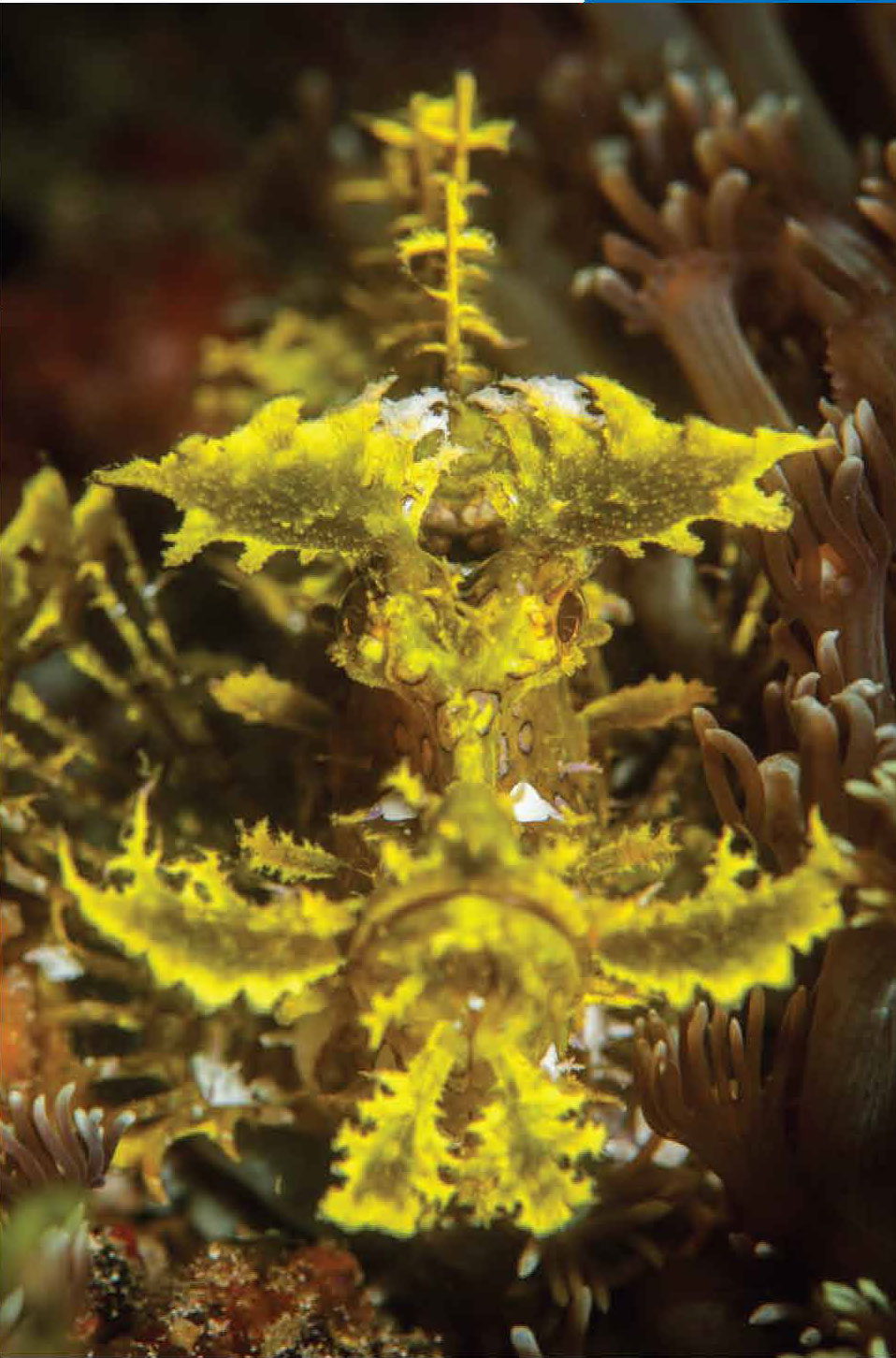 The weedy Rhinopias has evolved filaments that break up its outline, allowing it to easily ambush its prey. (Image © Dr Richard Smith)

Muck dives are interesting as they host a diverse set of species you are unlikely to see in any other habitat due to their distinct set of environmental conditions. Ghost pipefish, seahorses, frogfish and countless other oddities make this their home. They are all suited to the specific conditions found on a muck dive: fine sediment, few places to hide and rich waters. 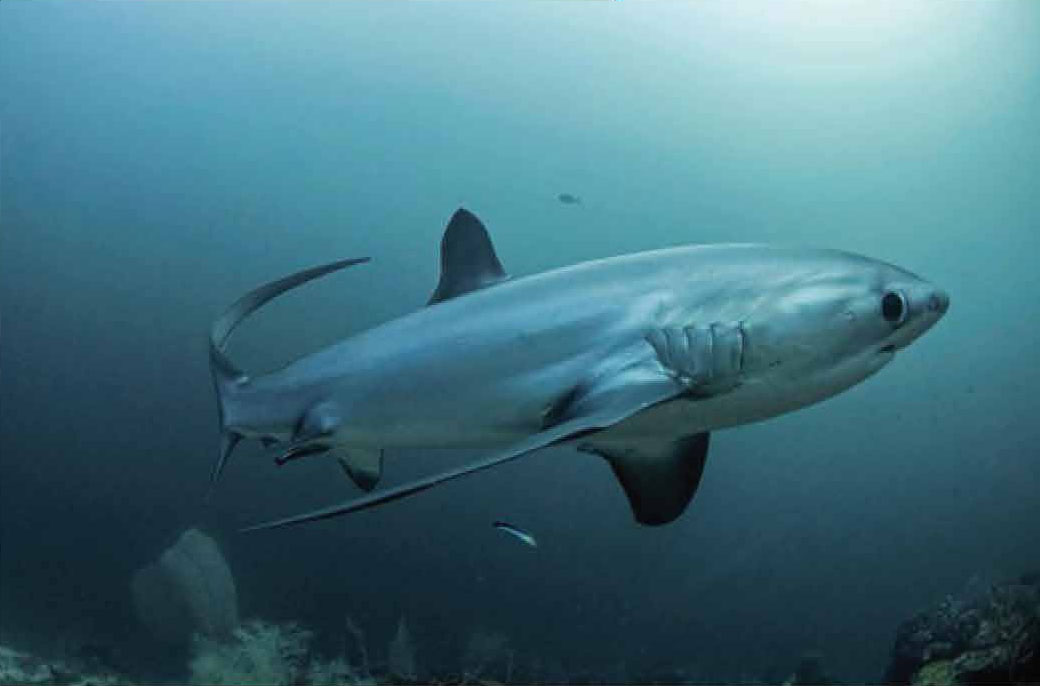 Threshers are regular visitors to Monad Shoal in the Philippines, where they come to visit the cleaning stations (Image © Scott “Gutsy” Tuason)

With a tail almost as long as its body, the thresher shark is an oddity in the ocean; however, there is always an evolutionary reason for the existence of such oddities. Sadly, one of the greatest sources of evidence for the function of their long tail came from fishing boats. Thresher sharks were often caught with their tail hooked on a long-line rather than having swallowed the hook as you might expect. Video capture has since confirmed that the tail is indeed an adaptation to assist in hunting. The long tail is used to strike schools of small fishes; the shark is then able to quickly turn and feed on the stunned prey. 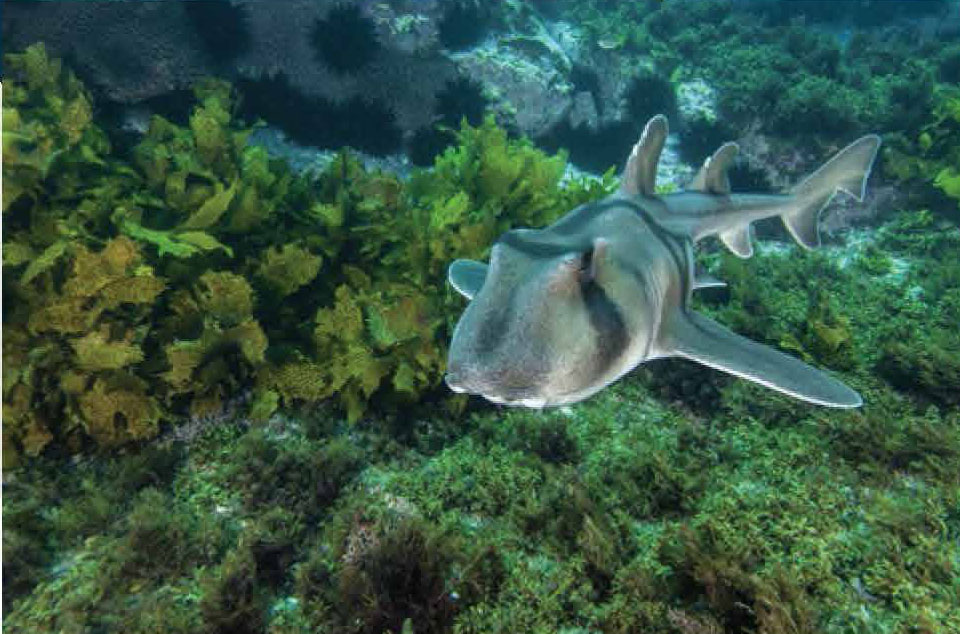 The Port Jackson is a horned shark that lives inshore around southern Australia; other species of horned sharks are found in costal regions around the world including Japan, Oman and the Galápagos (Image © Dr Richard Smith )

These southern Australian waters also accommodate a variety of unique elasmobranchs (belonging to the shark and ray families), the Port Jackson among them. These ancient horned sharks have half a dozen species dotted around the globe. The Port Jackson lays spiral egg cases that become lodged among the rocks and hatch 10–12 months later. The perfectly formed miniature versions of the adults, almost a foot in length, aren’t able to undergo great ocean voyages, preferring to remain close to shore. This has effectively isolated them in these waters and stopped their wider distribution. 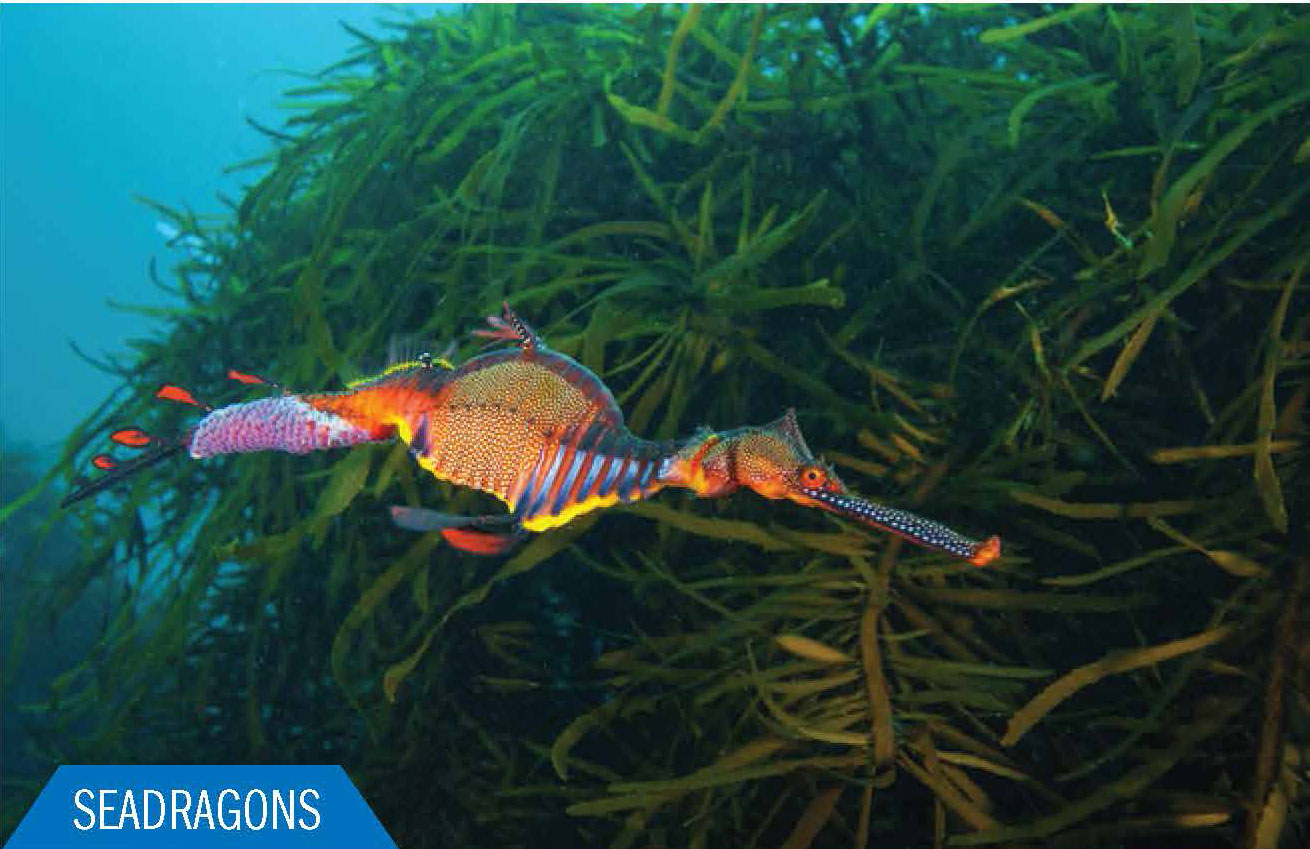 Endemic species aren’t only found in the tropics. Southern Australia has more than its fair share of indigenous species. The fabled seadragons are found only here. The weedy and leafy species were joined in 2015 by the ruby seadragon, which is known only from trawled deep-water specimens. It is a sibling (very closely related) species to the weedy, but has evolved a red colouration, presumably as an adaptation for living at depth where red light is removed by the water column, thus helping its camouflage.

Read the rest of this article in Issue 5/2015, AA No. 83 of Scuba Diver magazine by subscribing here or check out all of our publications here. 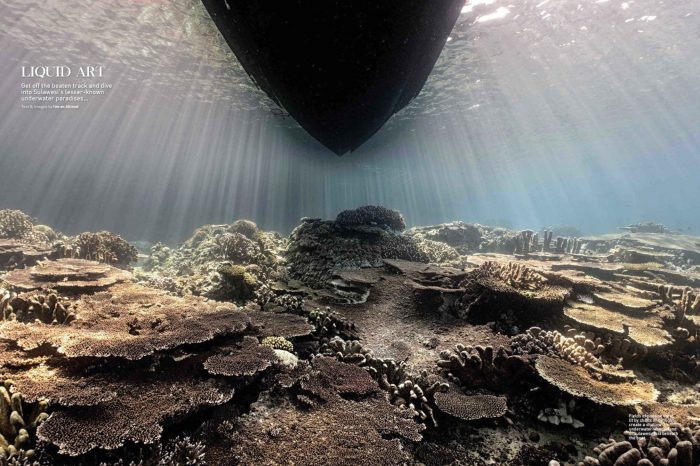 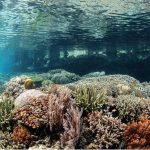