Slated to be the world’s largest oceanarium, Resorts World Sentosa’s Marine Life Park (MLP) is scheduled to open later this year in 2012 in Southeast Asia’s city-state of Singapore. The Marine Life Park will feature a colourful array of some 700-odd aquatic species, from eagle rays to batfish and even dolphins. But even before opening its doors, the new commercial aquarium has sparked controversy, and reopened debate on the ethical and conservation issues behind dolphins in captivity.

The Marine Life Park first came under fire when it acquired 27 Indo-Pacific bottlenose dolphins from the Solomon Islands. Of these 27, two died due to a water-borne bacterial infection, Melioidosis, which is not exclusive to animals in captivity; it is also known to affect those in the wild and even humans. The dolphins were being housed in a facility that had been built as a temporary home for the dolphins, in Langkawi in Malaysia.

“Alongside the other marine species to be housed at the MLP, our dolphins will play an integral role in our mission to create awareness and greater understanding of the complex marine ecosystem and the unique and beautiful marine biodiversity, amongst the large number of people who would not have the opportunity to explore the oceans,” said a MLP spokesperson. Additionally, the Marine Life Park has plans to collaborate with Sea Research Foundation to develop a marine environmental curriculum for students of all age groups in the Southeast Asia region – all in the hope of inspiring and educating the future generation.

Dr Naomi Rose, senior scientist of the Humane Society International, has little faith in such intentions. “I believe that dolphinaria mis-educate people more than they educate them. I also work on a large number of other marine mammal protection issues besides the welfare of captive dolphins – whaling and dolphin hunting, marine noise, emerging diseases, ship strikes, fisheries entanglement, pollution, marine debris – and I honestly don’t see that the millions of visitors to dolphinaria are learning much about these serious threats,” argues Dr Rose. To better understand the severity of the captivity issue, explains Dr Rose, one needs to examine more closely just where these dolphins are coming from. 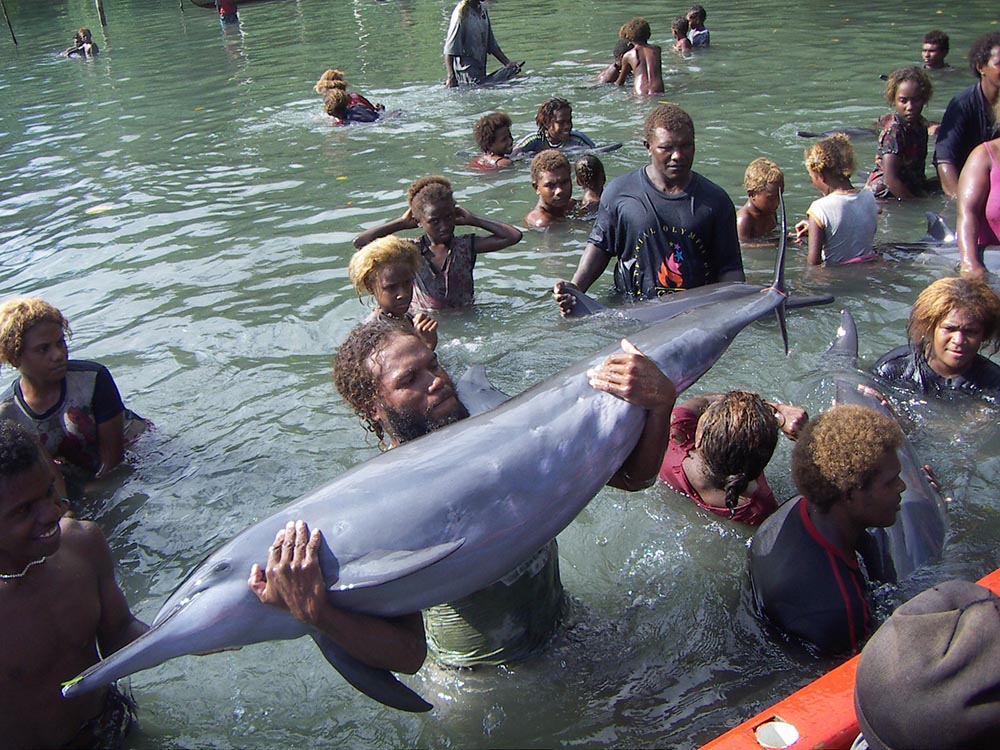 For unknown reasons, spinner dolphins appear to go limp and “give up” when held

Back to the Beginning

Far from the city streets of Singapore, waters are being stirred inthe remote archipelagic nation of the Solomon Islands. Dolphin hunting in the Solomon Islands was established as a way of life many centuries ago. Prized for their teeth (used as currency and jewellery) and to a lesser extent, their meat, dolphins were highly sought-after by seafaring locals, especially from the island Malaita. To capture the dolphins, traditional dolphin hunting methods involved driving the mammals to shore with noise created by banging stones together in their small boats. These tribes commonly caught the spinner (Stenella longirostris) or the spotted dolphin (Stenella attenuate). Only rarely did they catch the stars of aquaria all over the world, the common dolphin (Tursiops truncatus) and the Indo-Pacific bottlenose dolphin (Tursiops aduncus).

Between 1998 and the early 2000s, the people of the Solomon Islands were caught in an intense civil conflict. As a result of this national crisis, many Malaitans were left homeless and jobless. Seeing this as an opportunity, international dolphin traffickers began paying locals attractive fees to do what they have done for millennia – hunting and capturing dolphins. But according to activists, instead of spinner and spotted dolphins, the traffickers requested live bottlenose dolphins.

Local government officials of the Solomon Islands soon became aware of the trade and the growing controversy, and today, they limit the capture and export of dolphins to 100 individuals per year. These laws and policies however, have been on a rollercoaster ride since the mid-2000s. One year, exports might be banned altogether, and the next, a quota might be imposed. And the question remains, is the capture of 100 dolphins per year sustainable?

Dr Naomi Rose argues that preliminary surveys in the Solomon Islands show that there are no more than a few hundred Indo- Pacific bottlenose dolphins in the entire island chain, in distinct groups of approximately 100 to 150 individuals each. But the Convention on International Trade in Endangered Species of Wild Fauna and Flora (CITES) has not yet completed its review on the conservation status of Solomon Islands dolphins due to the lack of population estimates, research, and information. This poses a major concern, especially for the Indo-Pacific bottlenose dolphin, one of the species sought after by aquaria. The species was only identified as a being separate from the common bottlenose dolphin in the late 1990s, and little is known about the Indo-Pacific bottlenose. But for many, whether or not the capture is ecologically sustainable misses the point entirely. For some, it’s an ethical issue.

That’s where activists like Mark Berman come in. The associate director of Earth Island Institute’s International Marine Mammal Project has been working on the issue for over 20 years now. Together with other conservationists like Ric O’Barry, Campaign Director of the Save Japan Dolphins project (featured in the Academy Award-winning film The Cove) Berman is currently talking to locals, policymakers, organisations and fellow activists to change the rules of the game, and put an end to this controversial trade. “We made deals with Malaitan villages, like Walande and Fanalei. There have been no dolphin kills [in the Solomon Islands] since 2010, and that’s because we’re supporting the communities with funding projects to help them get out of the dolphin business and find alternative methods [to make a living],” says Berman.

While the dolphin kills have come to an end, the capture for aquaria trade continues. After the dolphins are driven to shore by the locals, they are placed in nets and are either brought to sea pens or swimming pools. Once it is determined which dolphins are fit to be transported to a commercial aquarium, the selected group is brought to their new home via an airplane, reportedly for a price tag of $60,000 each. “Dolphins never get used to the trauma of being removed from the water, put in a sling, transported in a truck or plane, and put into an enclosure in a new facility. It is always hard on them, physically and mentally,” stresses Dr Rose.

In its defence, Singapore’s Marine Life Park states that the 25 dolphins are currently being well taken care of by an expert panel of highly respected specialists and veterinarians. Together, these marine mammal veterans represent over 300 years of relevant experience working in more than 60 marine mammal facilities internationally. It also claims that the acquisition of its marine animals are in compliance with CITES, which regulates the trade of animals to ensure sustainability and protect wildlife species from extinction. 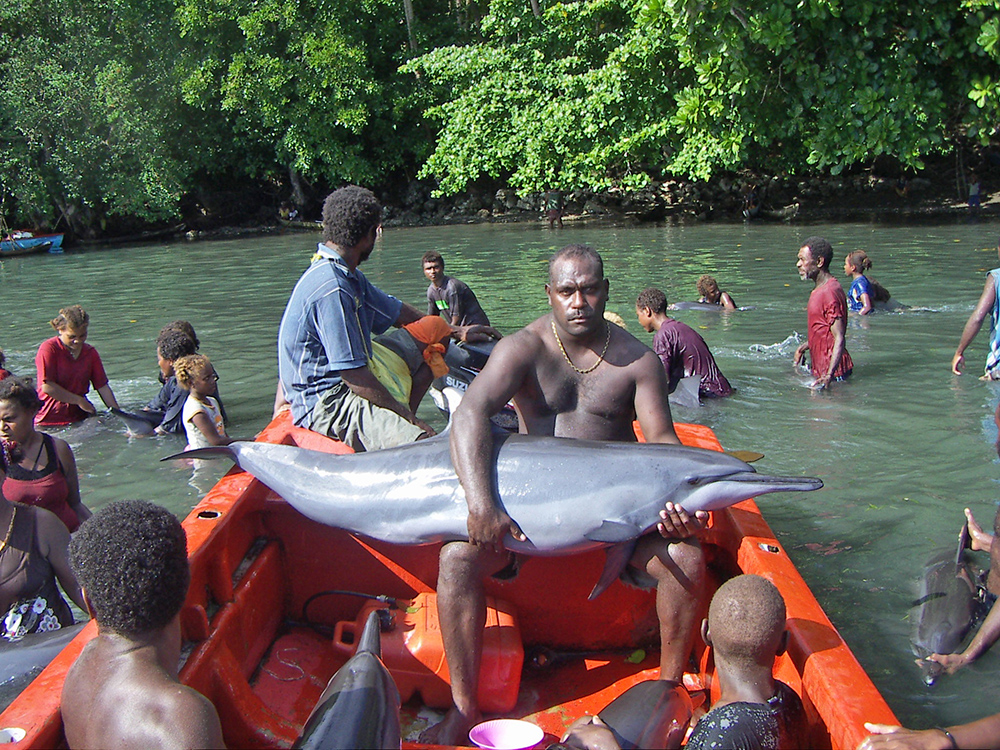 Dolphin hunting has sustained villages in the Solomon Islands for centuries, but recently, the practice has been commercialised for aquarium

After the captures that led to the deaths of two dolphins, the Marine Life Park has received quite a bit of negative feedback from activists, scientists, as well as the general public. This has led people like Berman and Dr Rose to question just how ethical it is to keep these highly intelligent and social mammals in an enclosed area for the rest of their lives.

Dolphins travel great distances, up to 50 to 100 miles daily, cooperatively hunting for prey, and spending a great deal of time socialising with other dolphins. So what are the repercussions of capturing these animals and stripping them of their freedom, fresh food, and social time? Dr Rose believes that the capture itself is a traumatic experience for dolphins, no matter what method is practiced or how experienced the captor is. “[Capture] can cause a condition called capture myopathy, or capture stress. It can kill. The science on this is not controversial – it is well-established.”

“Capture stress” is the meat of virtually every argument, from both sides. Aquaria argue that it is something they take into consideration very seriously and deal with by building state-of-the-art facilities and hiring only the best trainers and specialists in the field. Activists retaliate by saying that no matter how a facility is built or how they are cared for, a dolphin would naturally be subject to stress living in an area which bears no resemblance to their natural habitat. “This stress [also] compromises their immune system, which makes them more susceptible to infections and diseases that their wild counterparts can fight off more easily,” says Dr Rose.

Adding on to their arguments, Berman and Dr Rose both feel that the elements of dolphin shows stress the animals even more. The noise crowds generate, and the tricks the dolphins are conditioned to perform for the reward of a handful of dead fish, are all believed to be contributing factors to the mortality rates of dolphins in captivity. Further, if these programs were all in the name of “education and conservation” rather than being motivated by profits, activists argue, then why charge admission at all? 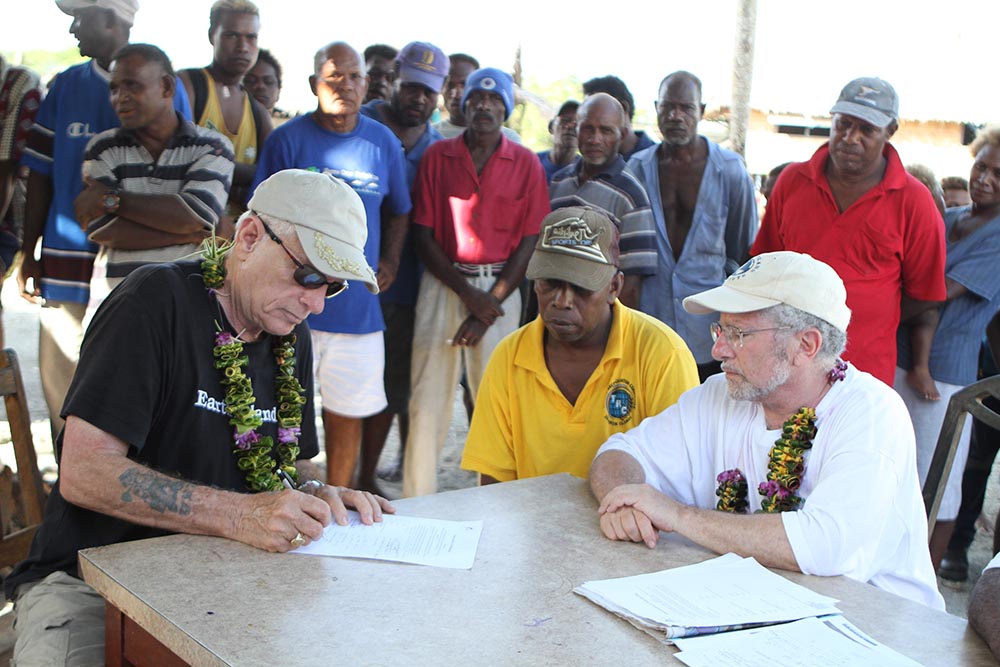 The issues that surround the trade and the captivity business are seemingly endless. But both Berman and Dr Rose believe the public need only to look in the mirror to see who holds the real power in this controversy. When we buy tickets to these shows, the companies that finance the commercial captures of these wild animals make millions of dollars. And unless that changes, the reality is that dolphins will continue to be taken from the wild, and risk premature death in captivity.

As a scientist and advocate herself, Dr Rose argues that performances in particular, a practice that began in the 60s, should be abandoned. “How many reputable zoos still have chimpanzees riding tricycles or dancing bears? Virtually none. Yet dolphins are still performing flashy tricks in shows with loud music in the name of ‘education.’ In the 21st century, we should be more enlightened… There are simply some species of wildlife that do not thrive in captivity and dolphins top the list.”

The future of Resorts World Sentosa’s dolphins seems to be sealed. The 25 remaining animals are now being held in the Philippines, “in a well-established facility” and are expected to arrive in Singapore later this year. Activists in Singapore and abroad continue to campaign for a change in those plans. 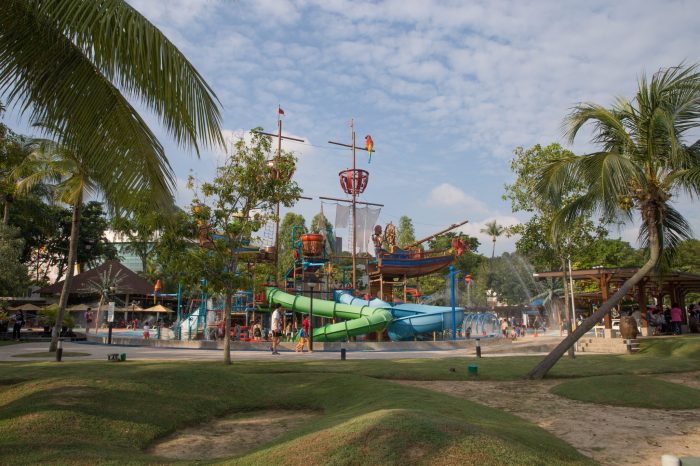 The Fun Odyssea: Celebrate the International Year of the Reef at this kid-friendly event! 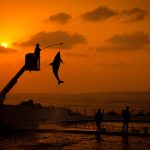