Asia-Pacific’s marine life gets pretty ostentatious! Get in on the science behind the ways these fancy creatures light up the seascape.

Sea creatures like to show off. Whether it’s to attract a mate, scare away a predator, or blend in with the sometimes equally flamboyant surroundings, there’s no shortage of wow factor in the sea: Divers are delighted by mesmerising cuttlefish, alluring anglerfish, and the undeniably flashy “disco” clam. When we think of creatures lighting up the oceans, bioluminescence might FLASHY be the first thing that comes to mind. What many people don’t realise, though, is that you don’t need to make light to be flashy – animals put on thrilling underwater shows using structural colouration, pigmentation, and fluorescence. Here are just a few examples of the science behind this conspicuous behaviour.

Bioluminescent plankton, dinoflagellates, off the New South Wales coast, line the beach at Plantation Point, Vincentia, with a glow that rivals that of the stars

INDO-PACIFIC This tiny squid is off the “cute factor” charts. Watching these miniscule squid hide from predators by placing pieces of sand on top of their head with their tiny arms may very well make them your new favourite animal. Bobtail squid have a unique symbiotic relationship with bioluminescent bacteria that inhabit a special light organ in their body. The bacteria are fed nutrients by the squid, and in return, produce light through a chemical reaction. This light – when viewed from below – hide the squid by matching the amount of light that hits their mantle from above. The light organ even has a filter that can slightly alter the wavelength of light produced to match the squid’s body.

GLOBAL (BOTH MARINE AND FRESHWATER ENVIRONMENTS) Dinoflagellates – small, single-celled marine plankton – can be toxic, but are also often bioluminescent. Watching a surfer at dusk during an algal bloom is a very memorable show, as dinoflagellates produce light when they are disturbed, and therefore light up the board’s movement through the water. If you’ve ever looked down at the wake the boat creates on your way to a night dive and seen bioluminescence, you should probably thank dinoflagellates. It is hypothesized that dinoflagellates create brief flashes of light when disturbed to act as a “burglar alarm”. This way, whatever potential predator disturbed them will now be in danger of an even larger predator that was attracted by the light and en-route to 1 get its own dinner!

The deep-sea dwelling anglerfish is not, shall we say, the prettiest fish in the sea. With its lucifer-esque appearance, it isn’t too surprising that the enzyme that speeds up the reaction to create its bioluminescent light is called “luciferase”. These teeth-centric animals use their light lure to draw in prey and attract mates. In some species, the female can be 60 times the length and 500,000 times the weight of the male, who becomes permanently attached as a parasite after mating. In the case of the anglerfish, therefore, it’s probably best not to go “towards the light”. 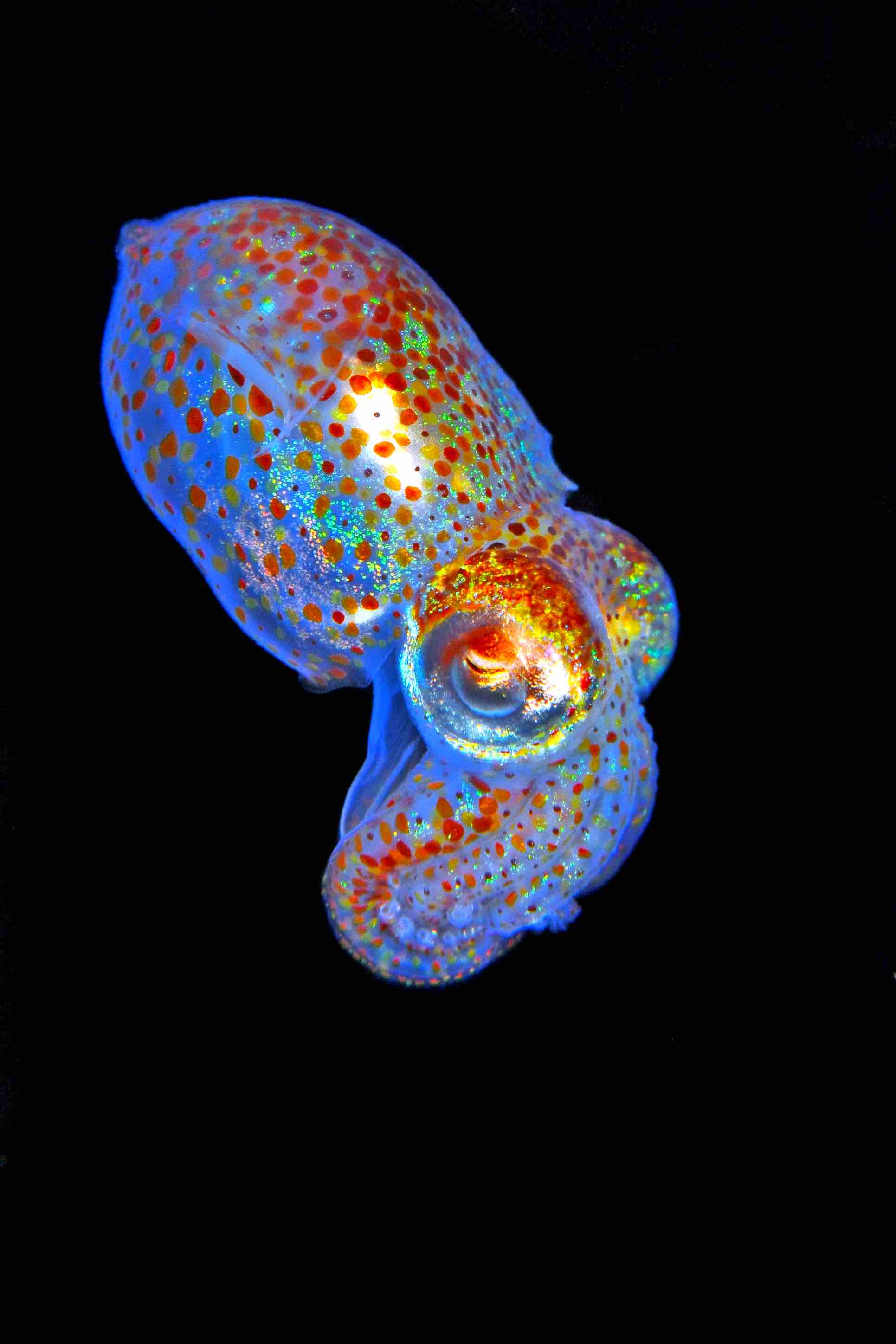 The bobtail squid, Sepietta oweniana, have a symbiotic relationship with the bioluminescent bacteria that give them their flash Image

The deadly blue-ringed octopus is a favourite villain in various crime stories, including James Bond’s Octopussy and Michael Crichton’s State of Fear. The flashing blue rings are produced by an interesting mechanism: multiple tiny layers reflect blue-green light, and dark pigments below each ring enhance their contrast. In order to hide the rings, the muscles above the ring contract. To expose the rings, those muscles relax and muscles outside the ring contract. Structural colouration such as the tiny layers in the blue rings interfere with the wavelengths of light and can dramatically alter what they look like. Organisms use all kinds of structures, such as spheres, gradients and crystals to interfere with light. For the blue ring, between the flashy warning and the impressive muscle show, predators are keen to stay far away from this small but potent creature. 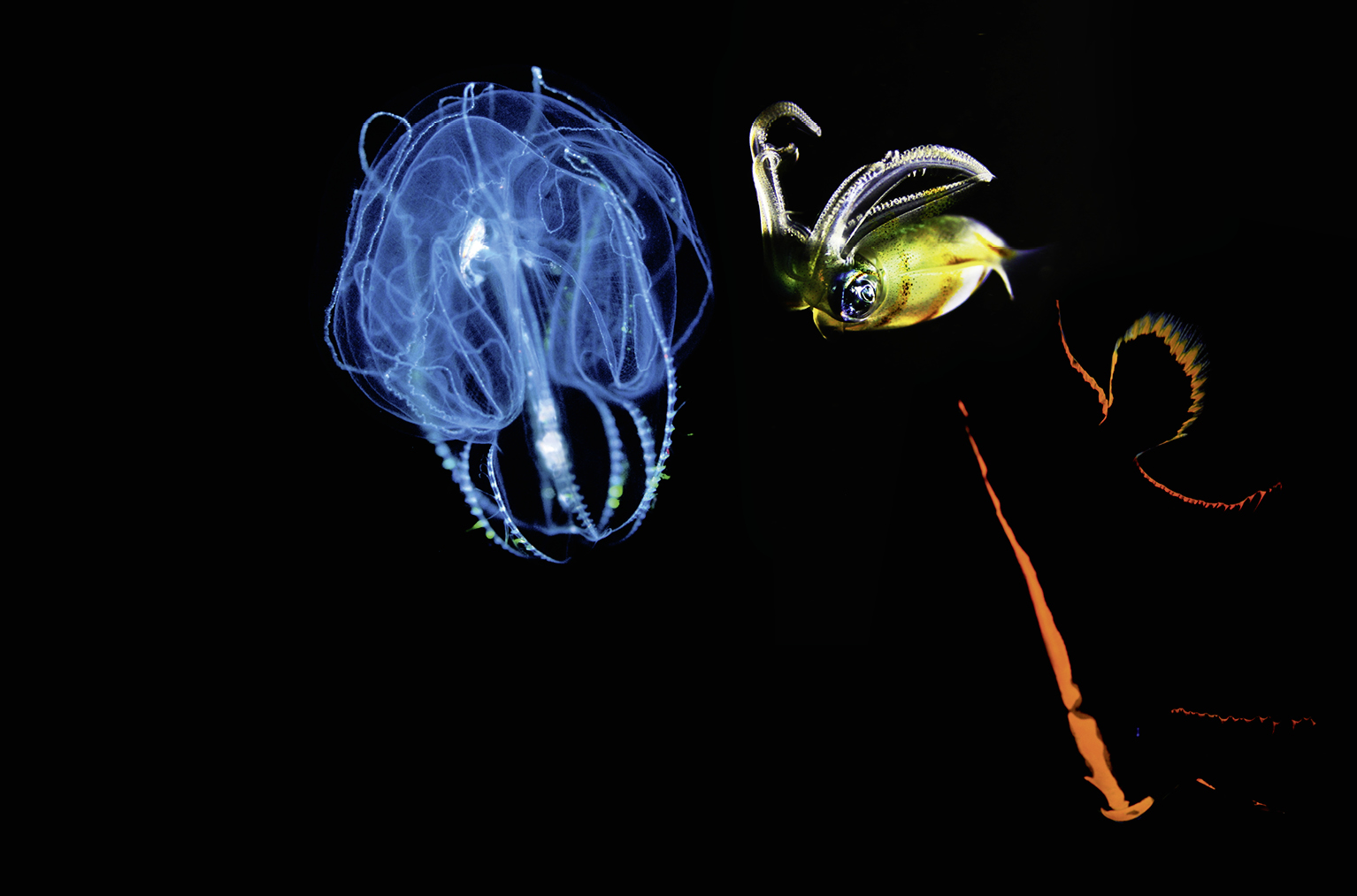 The newly crowned king of flashing is also sometimes the queen, as disco clams are thought to start out as small males and mature into large females. They have a highly reflective strip on the edge of their mantle that is filled on one side with tiny silica nanospheres. Silica is an ideal reflector and scatters ambient light, so one side of the tissue appears a brilliant white, while the other side appears dark red. Rolling the two sides back and forth two times a second creates a “flashing” appearance that’s quite dramatic, and amazingly, is not producing any light (just reflecting what ambient light is already there). Whether the clams are trying to lure prey, attract a mate, or scare away predators still remains to be seen, but their flashy display is quite a treat – if you can find them!

For the rest of this article (Scuba Diver 2014-2015 Issue 8 No 2) and other stories, check out our past issues here or download digital copy here. 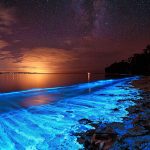