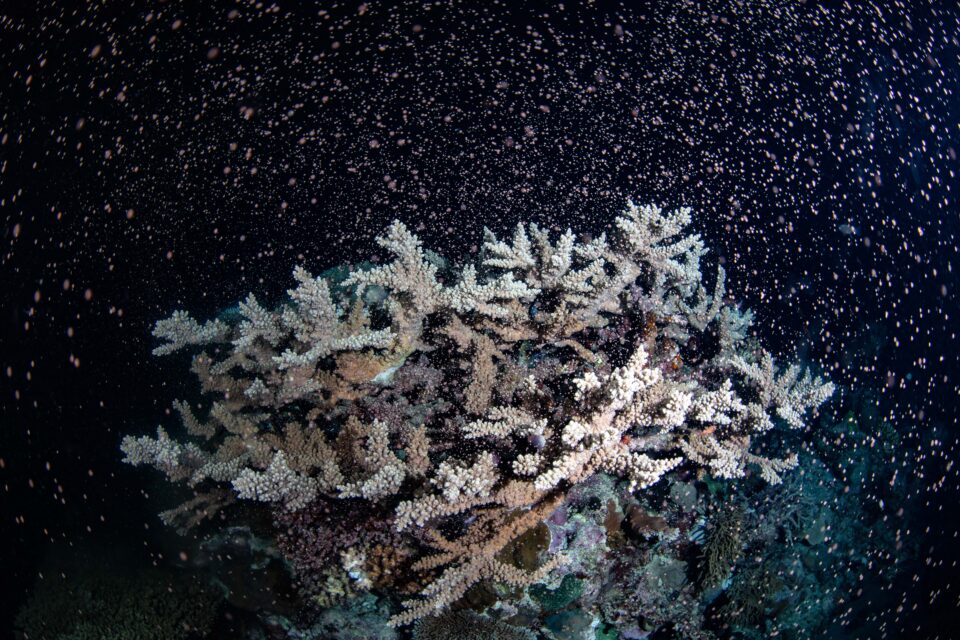 November 23, 2021, in Cairns Queensland, experienced an explosion of colour and a show-stopping sign of life, billions of coral babies were born on the Great Barrier Reef off the coast of Cairns, marking another milestone in the ongoing story of life on the Reef.

After 18 months of border closures in Australia, the principal marine scientist from Reef Teach, Gareth Phillips, has likened this year’s coral spawning event to a symbol of regeneration and hope.

Mr Phillips, who spent four hours filming last night’s event, said the timing of the 2021 coral spawn roughly coincides with the reopening of Australia, adding that his excitement for the new coral life reflects the mood of a nation emerging from COVID restrictions. 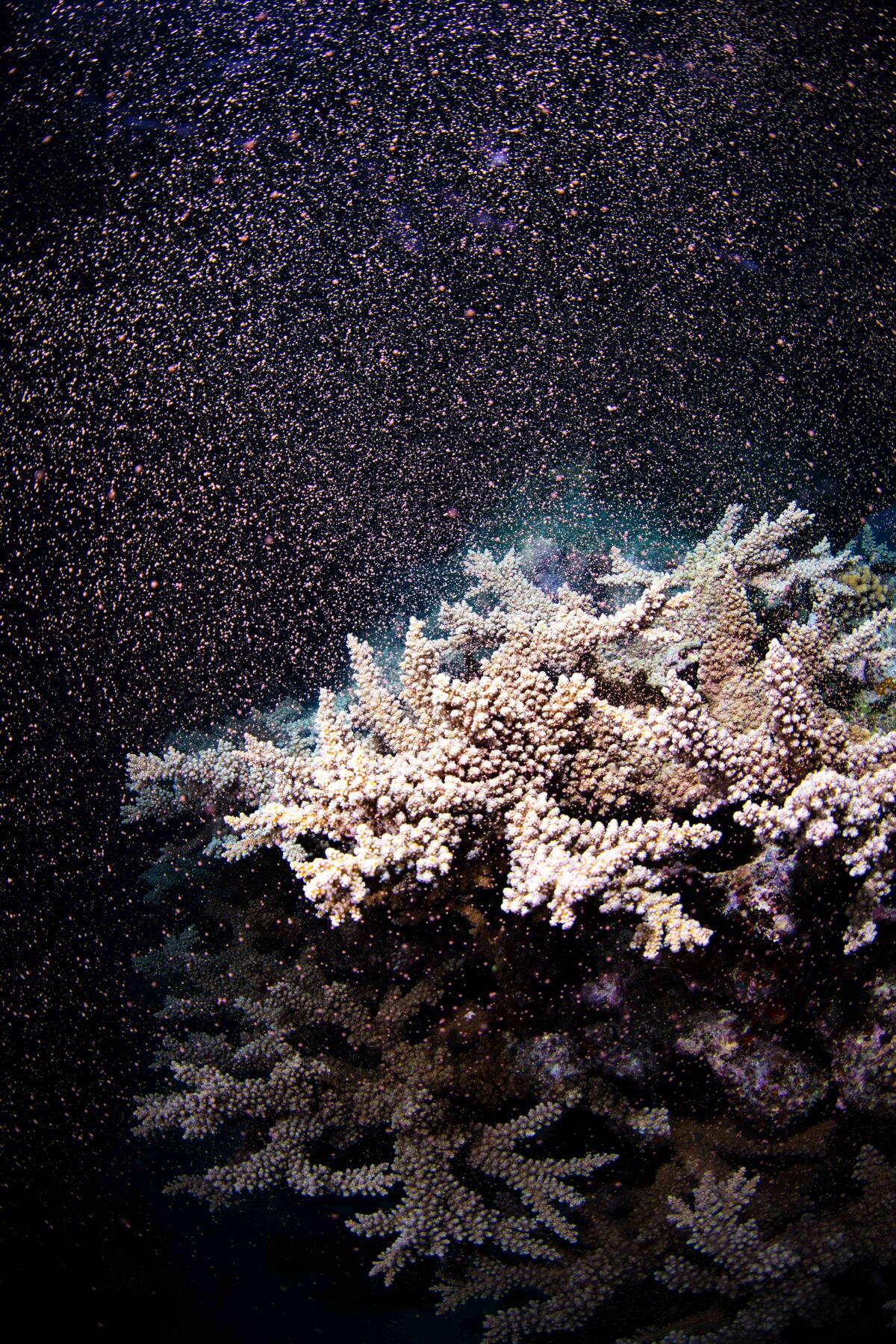 “Nothing makes people happier than new life – and coral spawning is the world’s biggest proof of that. We are coming out of restrictions with a fresh leap of life just as the reef is spawning. That positivity is what people are feeling. It’s the celebration of the year.”

Coral spawning occurs once a year when corals release tiny balls containing sperm and eggs into the water. These float to the surface where they break open, releasing both sperm and eggs to bump into each other and cross-fertilise.

Speaking from the Passions of Paradise expedition vessel at Point Break on the outer edge of Flynn Reef about 60km east of Cairns, Mr Phillips said this year’s spawning started soon after the sunset and proceeded in waves. 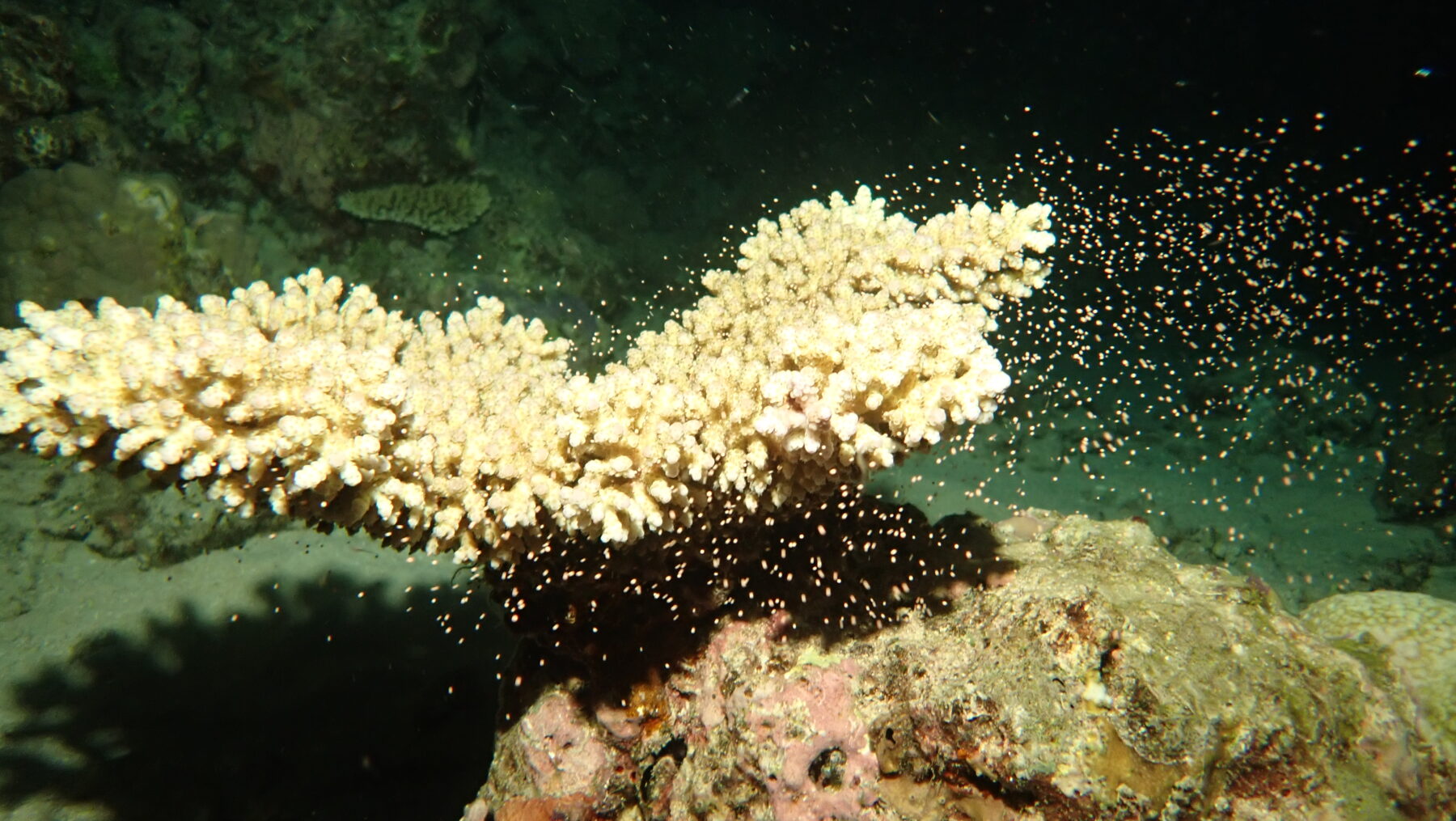 “I’ve seen the corals all go off at once, but this time there seemed to be different species spawning in waves, one after the other. The conditions were magical with the water like glass and beautiful light coming from the moon,” he said. “We went around looking for corals engorged with parcels of genetic material ready to go. Once we found a ripe coral, we watched as it took about 30 seconds for each colony to complete its spawning. It was the ultimate treasure hunt … it was so exciting that we even grabbed the skipper and got him in the water.”

With different sections of the reef erupting one after another, the team of six divers each watched different patches of coral.

“About five different genus of Acropora, the branching corals, went off releasing mauve-pink parcels. Next, the Porites, the big boulder corals all started smoking at once releasing what looked like a river flood plume turning the water cloudy,” said Mr Phillips. “Four hours after we first saw the coral spawning we are still seeing the spawn rise to the surface of the water. It is everywhere and trevally about 50cm in length are swimming around the back of the boat gobbling up the small fish that are hanging around to feed on spawn.”

Reflecting on the reef as a sign of hope for Australians, Mr Phillips said, “It is gratifying to see the reef give birth. It’s a strong demonstration that its ecological functions are intact and working after being in a recovery phase for more than 18 months.” 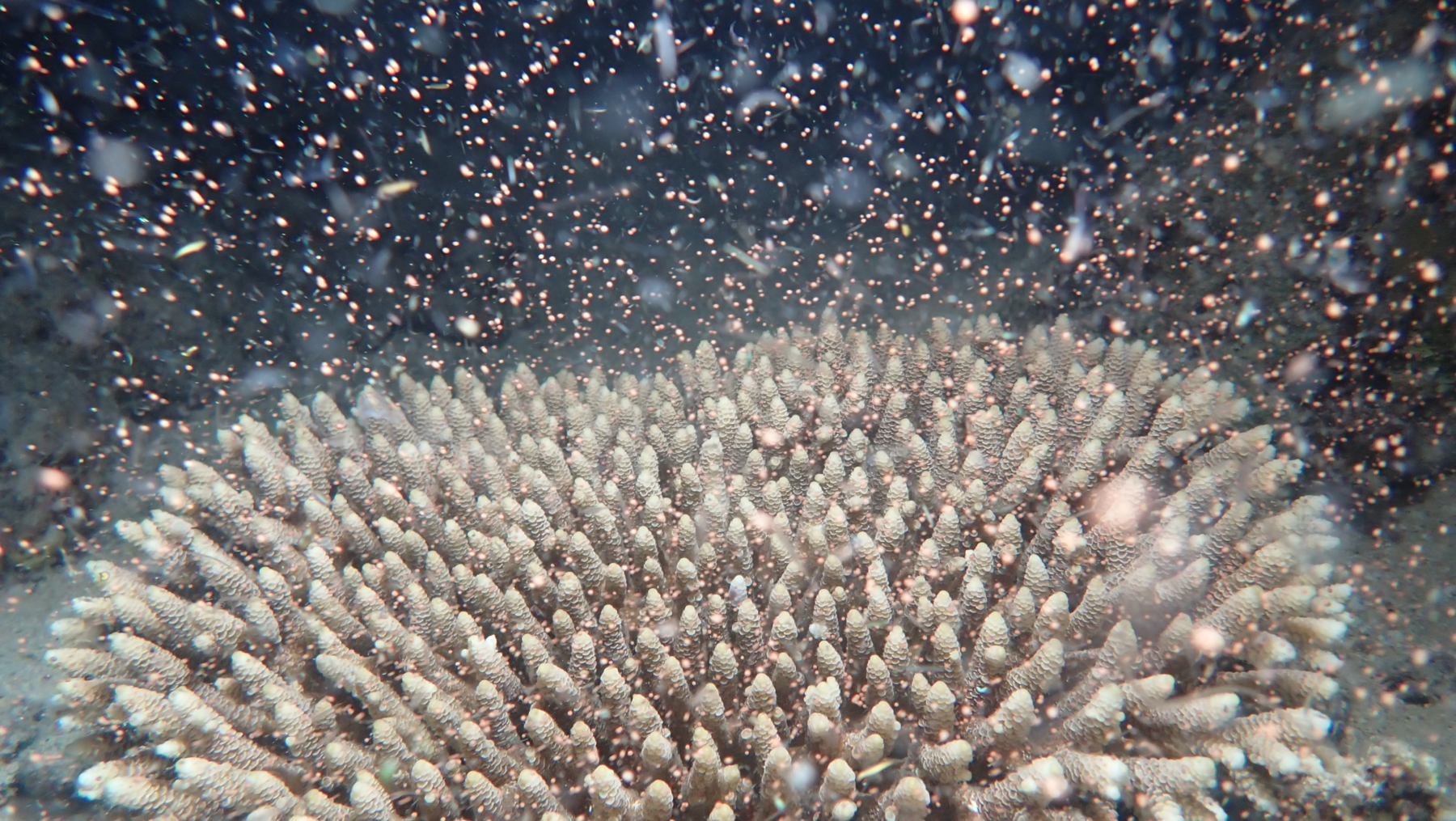 “The reef has gone through its own troubles like we all have, but it can still respond – and that gives us hope. I think we must all focus on the victories as we emerge from the pandemic.” 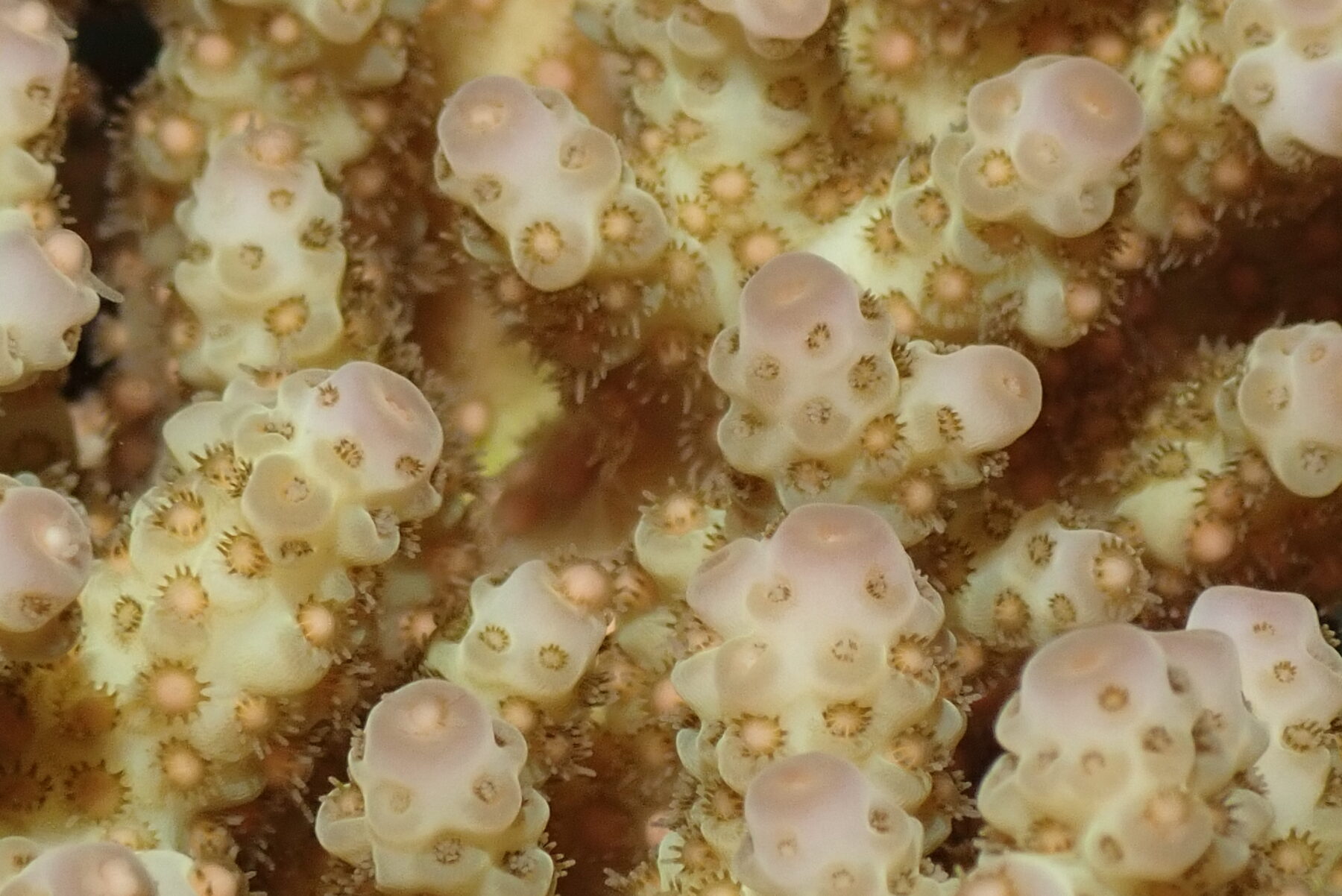 Mr Phillips and his crew set out to study this year’s spawning event as part of the Coral Index Project. They aim to travel to three different high-value reef sites over the next two days, running a transect to mark out patches of the reef to study. As the reef spawns at night, the crew will return to the specific reefs to film them for further analysis. It is the scientist’s version of an annual reef stock take.

“This work has been undertaken over the past two years, but this is the first time that the Reef Teach team is working on the Coral Index Project at night during coral spawning,” Mr Phillips said. “One team is capturing what is happening on video and the other is counting which species identified during the day are then spawning at night.”

A marine biologist with more than 20 years’ experience, Mr Phillips has monitored coral spawning on the Great Barrier Reef for more than a decade.

“With this project, we hope to show the variability and diversity of the reef. It’s a way of checking in on sites and monitoring their health.  It’s also a way to see a greater variety of species spawn.”

The Reef Teach expedition was supported by Tourism Tropical North Queensland in collaboration with Tourism and Events Queensland and Tourism Australia. Reef Teach also partnered with Passions of Paradise, a Cairns-based dive and snorkel tour operator to the Great Barrier Reef.

What is coral spawning?

Corals as a tiny jellyfish type of animal reproduce in two ways: the majority of the year they are asexual and simply split and divide, however during the short two to three-day coral spawning event, they undergo sexual reproduction and breed by throwing bundles of sperm and egg into the water for cross-fertilisation. The Great Barrier Reef stretches 2600km with coral spawning around the Cairns and Port Douglas region typically occurring over the same period. The northern-most reefs and shallow inshore reefs may spawn a month earlier.

Gareth Phillips was born in South Africa and relocated to Australia as an adult after seeing a tiny job advertisement in The Cairns Post seeking a skilled marine biologist. After arriving in Queensland, he worked in the tourism industry including as a skipper on a dive and snorkel boat.

In 2010, Gareth bought Reef Teach, a land-based educational program designed to combine science with tourism to teach travellers more about the Great Barrier Reef. Practising what they preach, Gareth and the Reef Teach team also spend time monitoring reef health and assisting with Eye on the Reef – a monitoring program that enables anyone who visits the Great Barrier Reef to collect valuable information on its health.

Since 2018, he has been working with tourism operators on the Coral Index Project.  Teams from tourism boats help gather data for Reef Teach’s Eye on the Reef Photo Point Enhancement Project, taking up to 20 images of the same spot and then feeding these images into a system where artificial intelligence generates a list of species recorded on the site. A partnership between the Australian Department of Environment and Energy, Reef Trust and the Great Barrier Reef Foundation funds the project. 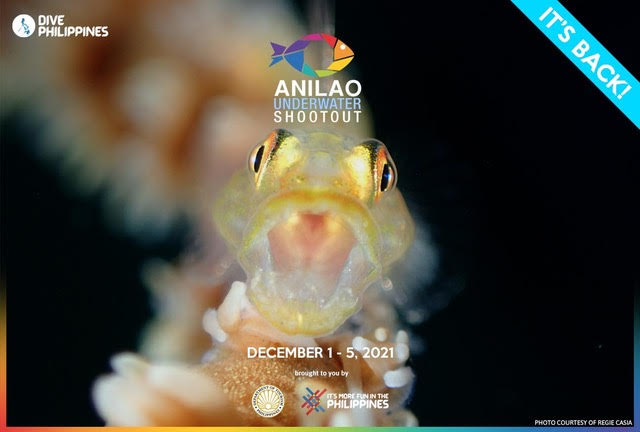 Anilao underwater ‘shootout’ is back! 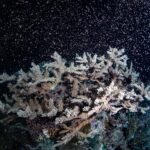