Humpback Whale, All hail the hump’

I was bemoaning this fact a few years back to my friend Jim Watt and he told me to come to his home in Kona, Hawaii, and he’d show me whales up close and personal. Sadly, Jim passed away recently but, when he was healthy and in his prime, perhaps no human on Earth loved to cavort with humpbacks and other blue water denizens more than Jim. His gift of expert freediving and photographing whales underwater combined with an uncanny knack for shooting amazing breaches had made him pretty much world-famous and internationally published.

I accepted his offer and was soon sitting miles offshore surrounded by nothing but gin-clear water. Jim told me these were what he dubbed “The Whale Grounds” and that he had more success photographing whales here than any other place. On the first day, we heard the sound of whales blowing as they surfaced and looked to see five males travelling toward us. Once in the water, I saw the whales travelling right under the boat. I was awestruck. I was so enamoured by the scene that I didn’t even snap a photo. I just watched as this group slowly swam by. Jim told me of his several whale encounters around the world, fuelling my enthusiasm as the days went on. He coached me a bit on photographing them and we spoke of cameras and life. It was a fine week.

The first time I saw a baby whale calf nursing from its mother, Jim explained to me that adult whales would rest nine to 18 metres below the surface. They can hold their breath for 20 to 30 minutes but the calf is only good for eight minutes or so. They will drift in the ocean currents. We had located a mother and calf and stopped the boat. I slowly and quietly slipped in to the water to find a mother sleeping with her tiny calf under her large pectoral fin, sucking milk. I had never seen such a tranquil image in nature. Soon, I saw the mother move and the calf rising. The latter approached me and surfaced. It took a breath and came even closer. It frolicked a bit and took another breath. Alone. Free. Vulnerable. Beautiful. Then it started back down and, soon, it was nuzzling mother again, revelling in her protection. I could not believe the gentility of the mother. She kept a watchful eye on me but did not flee. For the world’s largest mammals, they are amazingly skittish. They rested, took some breaths and then down they went. I watched this cycle for more than an hour, drifting with the whales, without a care in the world. The sun started to sink and we reluctantly made our way back. Thanks to this touching scene and Jim’s great knowledge, I was hooked on whales.

Nowadays, humpback whales in Hawaiian waters are heavily protected and only a few licensed biologists can legally get in the water with humpbacks in that state. But it is legal in the Kingdom of Tonga. For the last few years I have been making trips there to photograph the southern humpback whales that migrate there annually, sometimes accompanied by free diver Yoko Higashide.

Every time I enter the water in Tonga seeking to photograph and observe these special marine mammals, I think about the generosity of Jim Watt. He unselfishly shared his knowledge of the whales and I experienced firsthand his zest for recording the images that have thrilled people around the world. Those moments spur me to continue shooting the wonderful humpbacks in our seas. 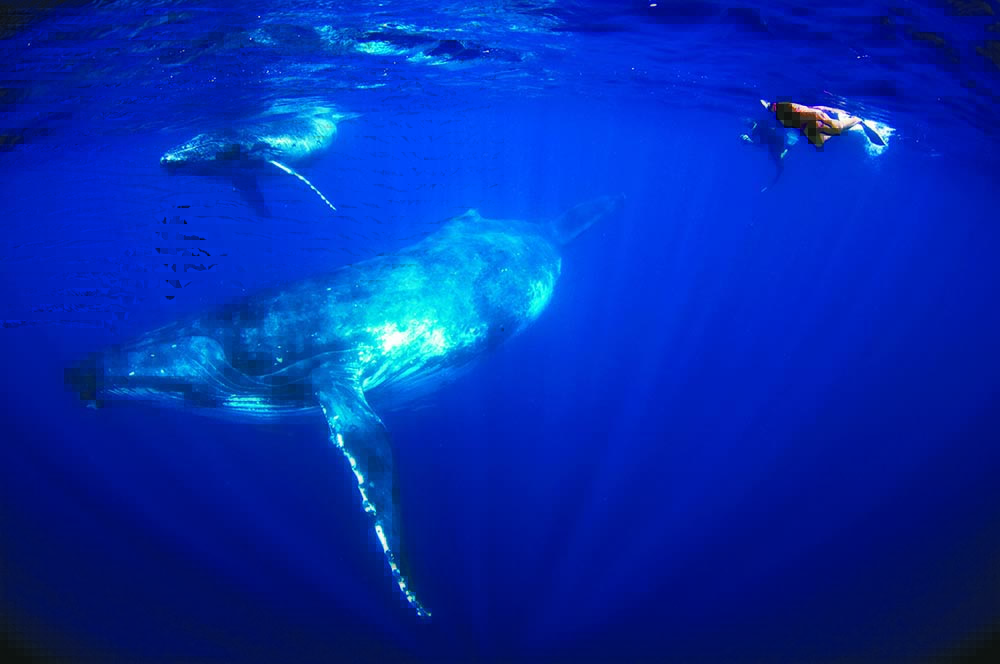 Surface behaviour includes pectoral fin slapping and lobtailing, which is a forceful slap on the surface of the water with their flukes (tail). Passive-aggressive displays called peduncle throws are used during breeding aggregations by females attempting to discourage an escort male, or by males toward other competitors. The aggressor swims quickly along the surface of the water and suddenly pivots, throwing its flukes into the air and sprays a huge volume of water in the direction of the offending whale.

Humpback breeding aggregations occur in warm tropical waters during the winter months. Although typically solitary, humpbacks do group at established breeding and feeding sites, the location of which individuals learn from their mothers. As a result, distinct sub-populations have formed, each following practiced migratory routes. Whilst at the breeding grounds, male humpbacks compete with one another for the chance to mate. Aggressive competition between males involves surface displays as well as charges and even physical collisions. Courtship rituals include elaborate songs, which can last up to 20 minutes and be repeated for hours. The mournful song of the humpback travels far through the ocean; however, the distance a whale’s song may reach has decreased in recent years due to increased noise pollution in our oceans.

After mating, whales migrate back to their colder feeding grounds in temperate and polar waters, where food such as krill and small fish is abundant. Humpbacks are baleen whales, meaning they have plates of keratin (the substance our fingernails are made of) hanging from their upper jaw, fraying into hair-like strands as they extend inside their mouth and ending near the tongue. To feed, the whale swims upwards with its mouth open, engulfing a huge volume of water. As it closes its mouth, the water is pushed out through the baleen plates, consequently trapping everything else inside. Some innovative humpbacks have been known to corral fish by releasing air bubbles in spirals around the school. This traps the fish within a small area, allowing the whale to then gulp enormous mouthfuls in one go.

Although the distance between feeding and breeding grounds can span entire continents, humpbacks travel at a steady eight to 10 kilometres per hour, with bursts of faster movement sometimes reaching speeds of 30 kilometres per hour. They therefore cover the distance with great speed, the first whales occasionally reaching breeding sites only a month after leaving their feeding grounds! Humpbacks feeding south of Cape Horn undertake the longest known migration of any mammal – over 8,200 kilometres – to their breeding grounds off the coast of Colombia and Costa Rica.

Pregnant females return to breeding sites as they also form excellent calving grounds. The gestation period is 12 months, and so the female is ready to give birth soon after she arrives. Each female will give birth to one calf, which is already three to five metres long at birth, and can weigh up to one tonne. The calm, warm waters are perfect for the newborn calves as they do not have to struggle against strong currents or waves to surface for each breath, and it gives them time to fatten before entering the icy waters of the temperate and polar seas. A mother stays near the surface with her calf, as it is unable to hold its breath for very long and sometimes needs to be supported as it resurfaces to breathe. A calf will nurse on its mother’s fat-rich milk for up to a year before it begins to eat solid food.

Although the tropical waters are ideal for calves, they are not productive enough to support their mothers’ huge appetites: a fully grown adult whale eats up to 1.5 tonnes of food every day! Once her calf has fattened and grown enough to undertake the journey back to the temperate seas, the mother leads her calf on the route it will follow independently in years to come. The calf will not reach sexual maturity until it is approximately five years old, and will continue to grow until it is 10.

With a life span of 45 to 50 years, a female humpback whale can produce many offspring in her time, bearing calves every two to three years. Although the calves are susceptible to predation from large sharks and orca, adult humpbacks have not been recorded to have any natural predators. However, they are vulnerable to entanglement in fishing gear and collisions with ships and their complex natural behaviour is easily disrupted by over-enthusiastic whalewatching groups.

Humpback whales represent a conservation success story, with their recent change in category on the IUCN Red List of Threatened Species from ”Vulnerable” to “Least Concern”. Often targeted by whaling boats because of their tendency to hug coastlines, humpback whales were once classified as “Endangered” and granted complete protection from commercial whaling in 1966. The global population has been steadily increasing since then, now estimated to be at approximately 60,000 individuals worldwide, with only two sub-populations classified separately in the Red List as ”Endangered”. 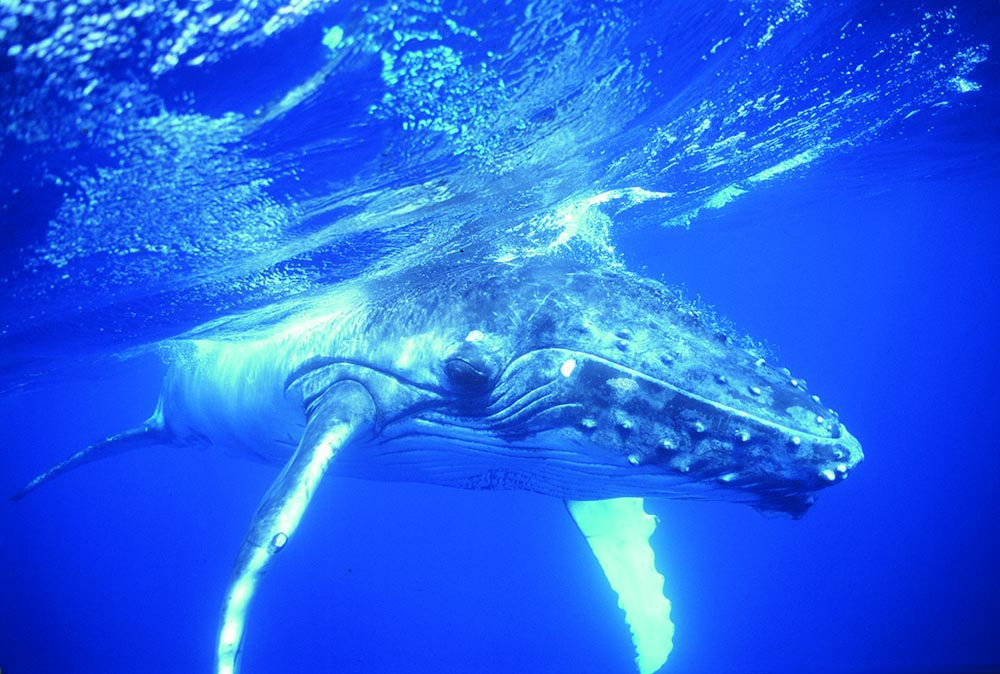 Normally, you can observe whales when the mother is resting and the baby feeds. If you see a pair resting (usually you can see the single baby blows), quietly enter the water and slowly and quietly snorkel over. Look down and see the mother resting below. The baby will probably be sucking milk from her teat under the pectoral fin.

When the mothers rest, they stay down at about nine to 12 metres below the surface for roughly 25 minutes at a time before they have to come up for air. Baby whales have to surface every eight minutes or so. Since baby whales are usually only children, they get lonely and want a playmate so human snorkellers may fill this void for the curious calves. This is one of the best opportunities to photograph whales as the baby may come close, check you out and then return down to sleepy mum. Also, mother and baby will come up together when she decides to take a breath and, if you are lucky, you may get a portrait of mother and baby.

You do not want to overwhelm the whales, so the wide zooms help here. You can zoom in to get facial expressions and details or zoom out to get the entire whale in the shot. The 10mm Nikkor lens can also be good but you should work close to your subject and watch what you are doing: baby whales are clumsy and may run into you and you do not want this to happen, for your sake and the whale’s. As they swim, mothers will also extend their long pectorals to protect their calves, so you must take special care to keep some distance as distances seen through super-wide lenses may be deceiving.

Whales do not like to be “dived on” so most work is done from the surface. Make sure your dome port has no scratches or dings as these can show up in the photo, especially when the sun hits them at the surface. I use manual control, much like the Nikonos, which can be tricky as whale encounters can be fleeting. This means that you must be fast when adjusting settings. Some professionals prefer Shutter Priority and keep the shutter at the very least at 125 to reduce shaking. ISO 200 or better will allow preferable higher shutter speeds. Also, long snorkelling fins and a good snorkel are a must. I also wear a couple of weights so I can easily sink below the surface without alarming the whales. 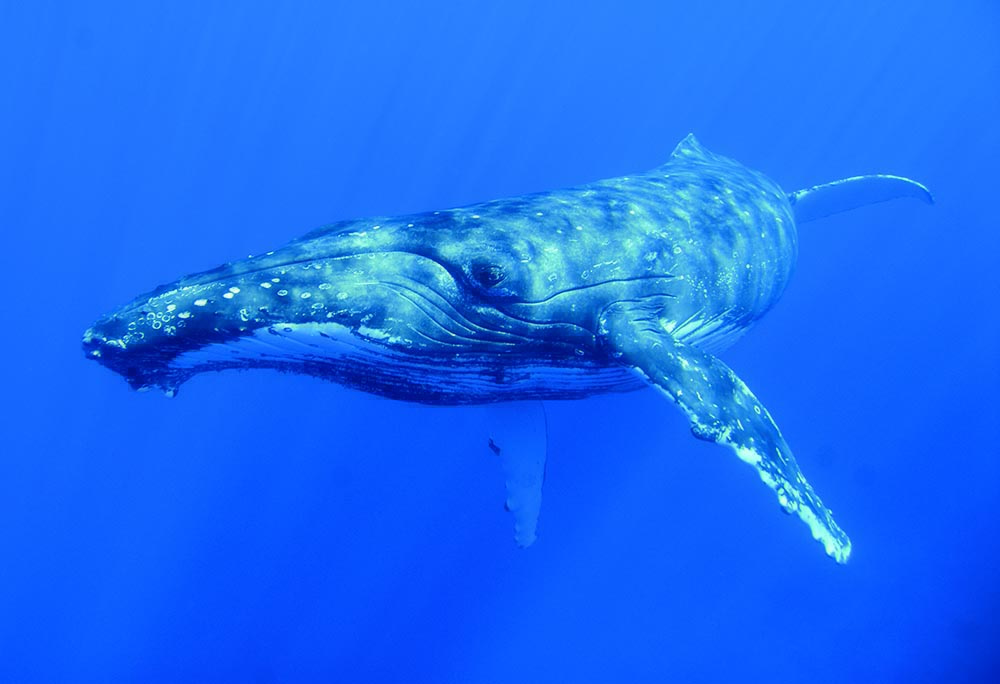 Size: 12 to 15 m, The female is generally larger than the male 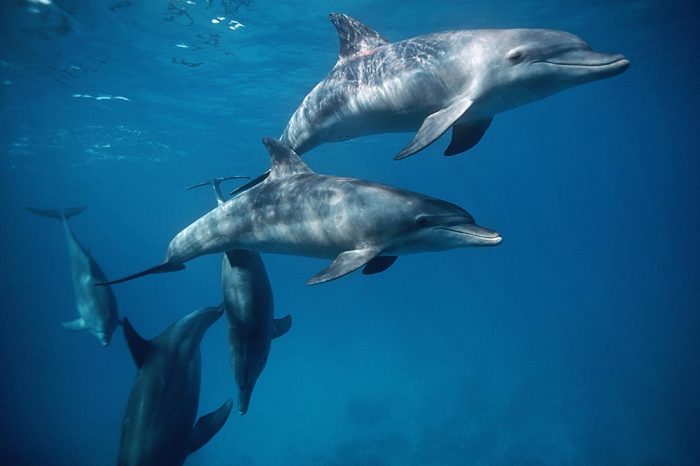 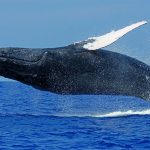 Humpback Whale, All hail the hump’