Largely closed off to tourists, the volcanic islands of Narcondam and Barren offer some of India’s most pristine and exotic dive sites. But these islands are facing a grim reality, and it’s time for divers to step in and intervene

Text and images by Umeed Mistry

The first islands in the Andaman chain to witness a new day dawning are India’s two volcanic islands – Narcondam and Barren. These two sentinels stand-alone, further eastward into the Andaman Sea, with Thailand being the next great landmass 500 kilometres away. Barren and Narcondam are located along the north-south trending volcanic arc extending between Sumatra and Myanmar, with Barren still erupting to this day.

The two volcanoes are isolated mountains in the Andaman Sea, with the foundations of Barren Island resting more than two kilometres below sea level. It is only natural, therefore, that both the active Barren Island and the dormant Narcondam Island have aroused curiosity and a sense of adventure

in those of us who like to wander. And with the bureaucratic and administrative whimsy regarding visits to these islands – making them sometimes accessible, and at other times off-limits to civilians, tourists and diving vessels – these are adventures for the taking, should the opportunity arise! 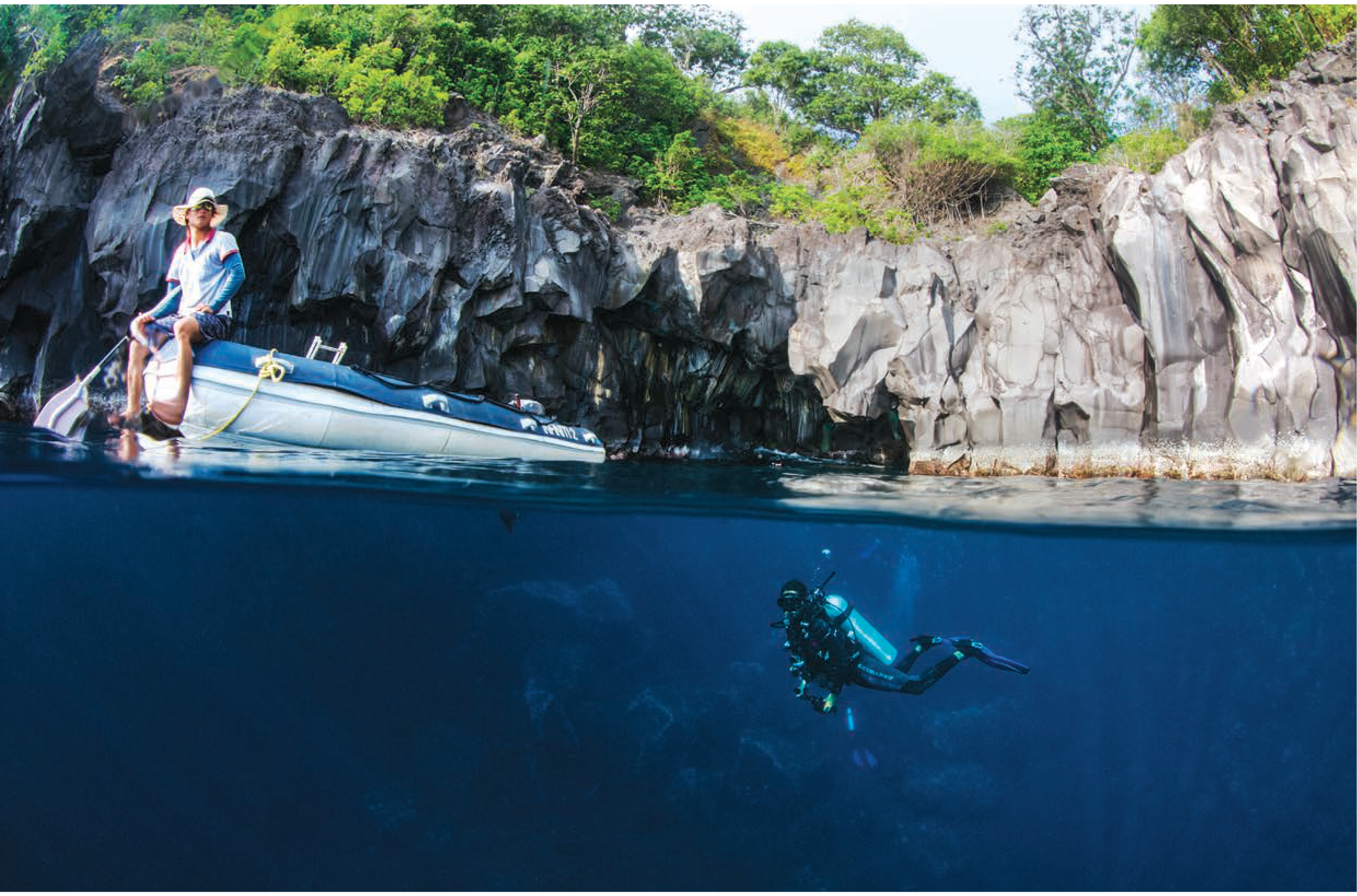 There are many things that are unpredictable about a visit to Barren island. Sometimes the island is quiet, almost serene against an absurdly blue sky and a placid sea. Other times, a giant plume of ash and smoke rises from its caldera, blotting out the sun, raining ash into a sea that roils with crazy currents. The eastern and southern side of the island have trees that have colonised the parts of the landmass that no longer are affected by the lava flow. White-bellied sea eagles, feral goats left there by British sailors, bats, rats and crabs inhabit these areas. The western side, in direct contrast, is an ash-brown lava slope ending in jagged rocks at the ocean’s edge.

Underwater, Barren goes from long, seemingly empty, black sand flats to near-vertical drop-offs covered in massive gorgonian fans. A submarine circumnavigation of the island reveals grottos, weird geometric rock formations, slopes and ridges carpeted in purple soft coral, sheer dark drop-offs that have no visible bottom, and shallow coral gardens that sparkle in the sunlight. There are days when the visibility is so good, and the water so still, that a manta ray near the surface can be spotted while observing coral-covered shelves 60 to 80 metres below. The black substrate is sometimes almost devoid of life, until the next corner where, supposedly, the high mineral content of the lava flowing into the water has created a bay of some of the most healthy and fast-growing coral in the entire Andaman chain.

One part of the dive, a site called Washing Machine, has divers clinging to the wall, their fins flailing towards the surface in an up-current that threatens to shoot them up and over the shallow anthias-covered ridge. Round the next corner, just 30 metres away, exhaled bubbles are swirling downwards along the steep drop-off, disappearing into the blue-black. Manta rays always seem to be around Barren, sometimes solitary and other times in small groups. Whether they are transient visitors or year-round residents is hard to say, because nobody has spent the time diving Barren through the year. Dive boats tend to visit these sometimes treacherous waters only in the calmer months of February to May. 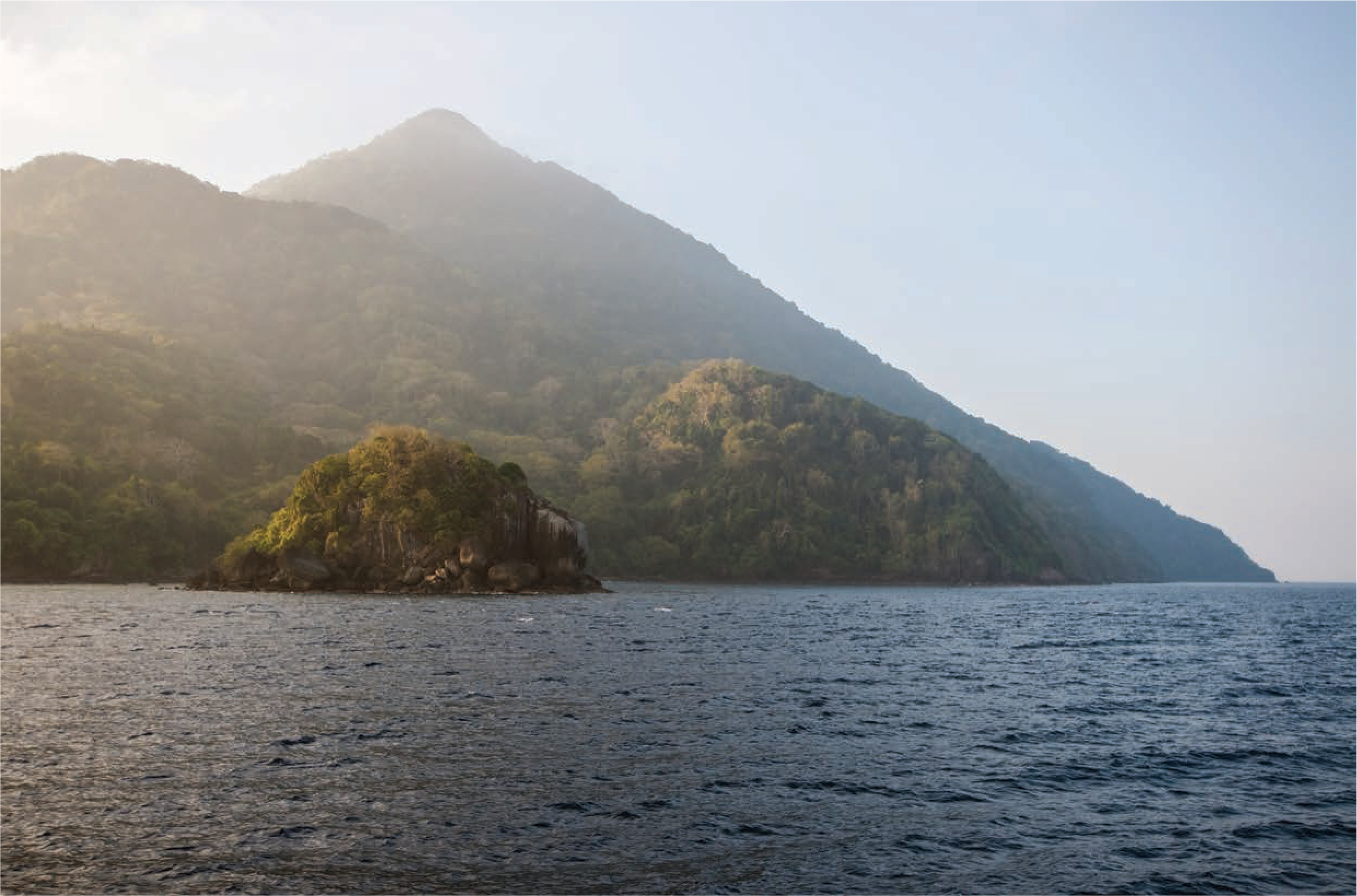 Narcondam, green-and-gold in the morning light, is the more benign of the two volcanoes. A dense forest has grown over the entire mount – dormant since humans have been recording its history. A small police outpost on the rocky eastern beach stands guard to protect this remote island lost to time. High up in the trees overhead roosts the only population of the exceptionally-rare Narcondam hornbill – a beautiful bird that somehow came to exist only on this island. The hornbill shares its island home with pigeons, sea eagles, flying snakes, lizards and rodents by the thousands. The little hairy mammals emerge in huge numbers at dusk and have struck up a live-and-let-live status quo with the policemen, who have little choice in the matter.

Underwater, Narcondam is a little more forgiving than Barren. The island’s sides don’t drop off as precipitously, and coral seems to have colonised most of its underwater circumference. Giant boulders have come to rest on some parts of the reef, forming incredible underwater topography. Huge schools of bigeye trevally and barracuda have made their residence here, along with the variety of other reef fish found in the Andaman chain. While coral bleaching has left only skeletons in the first 10 metres of water, the deeper reefs are incredibly vibrant and diverse. The presence of huge gorgonian fans and the biggest barrel sponges in the Andaman Islands are indicative of the currents that sometimes tear through these waters. Here too, manta rays and the occasional whale shark make an appearance.

Whales and dolphins are often sighted sailing to Barren and Narcondam. Depending on the time and tide, these reefs can teem with pelagic fish, or simply host their regular reef residents. Fishermen’s tales speak of large numbers of sharks that used to inhabit these waters. But these are stories that haven’t been corroborated by the divers from Havelock Island and Port Blair (the capital of the Andaman Islands) who have visited these two islands with increasing frequency over the last decade. 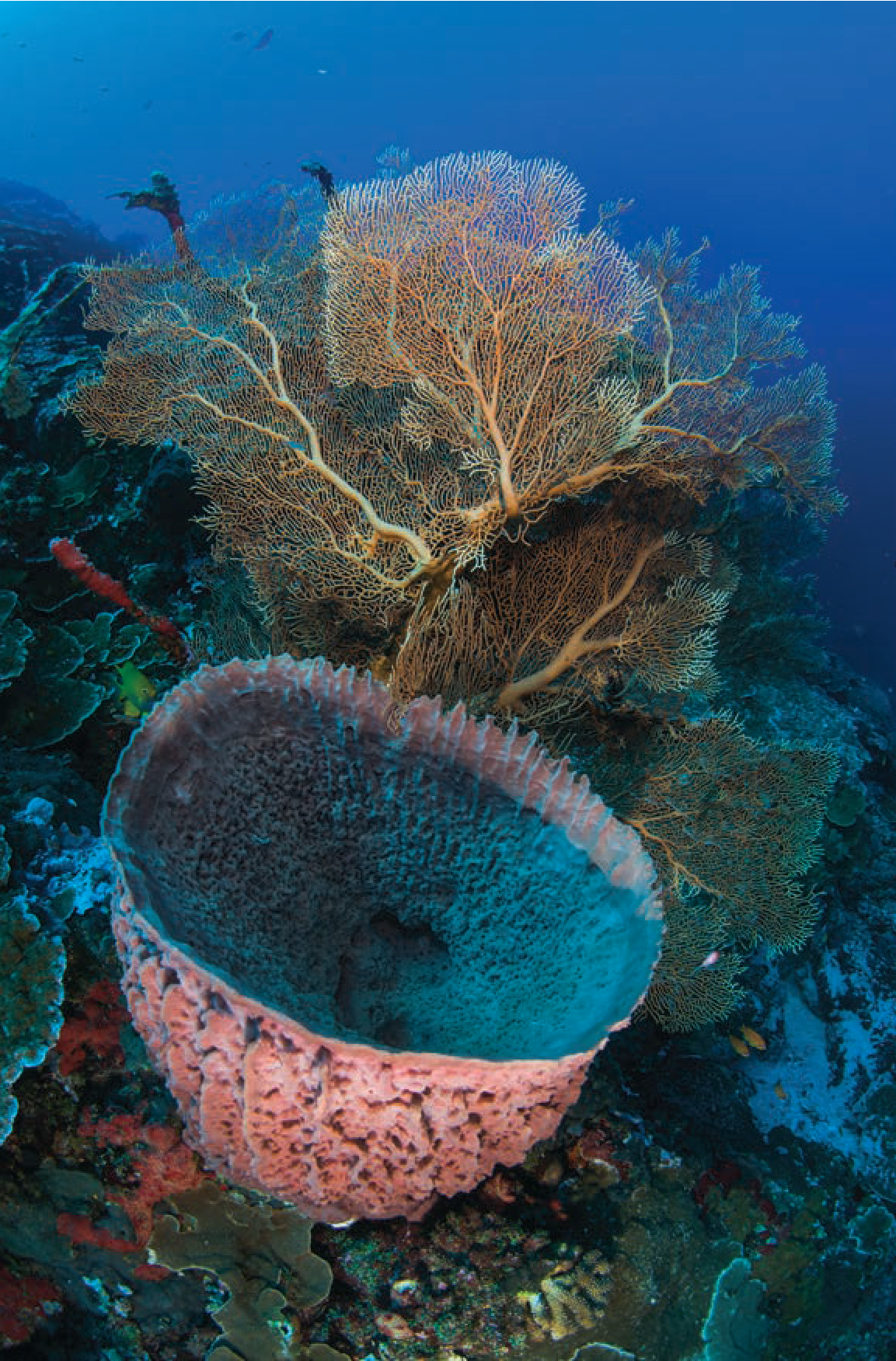 Barren and Narcondam have watched over this part of the Andaman Sea for eons. But their realities have changed significantly in the last century, and are rapidly changing further. Poachers from Thailand

and Myanmar regularly visit these poorly-patrolled islands. And as regulations for visiting yachts and local dive operators are tightened, divers and tourists with the potential for intervention are kept out of bounds. These two islands have been separated from the main Andaman chain through the geological history of the formation of these islands. Given that the Andamans itself is a hotspot for biodiversity and endemism, the scientific community should be encouraged to study these two islands thoroughly.

But so far, beyond territorial bragging rights and discussions about maritime security, Barren and Narcondam are, for the most part, ignored. However, as plans for tourism development in the Andaman Islands are quickly unfolding, the future of these islands remains to be seen.

For the rest of this article and other stories, download a digital copy of Scuba Diver australasia + ocean planet No. 113 Issue 3 /2018 here! And for a limited time only, get the best e-magazine deals at USD7.99 for 6 issues* (Usual rate: USD29.94)