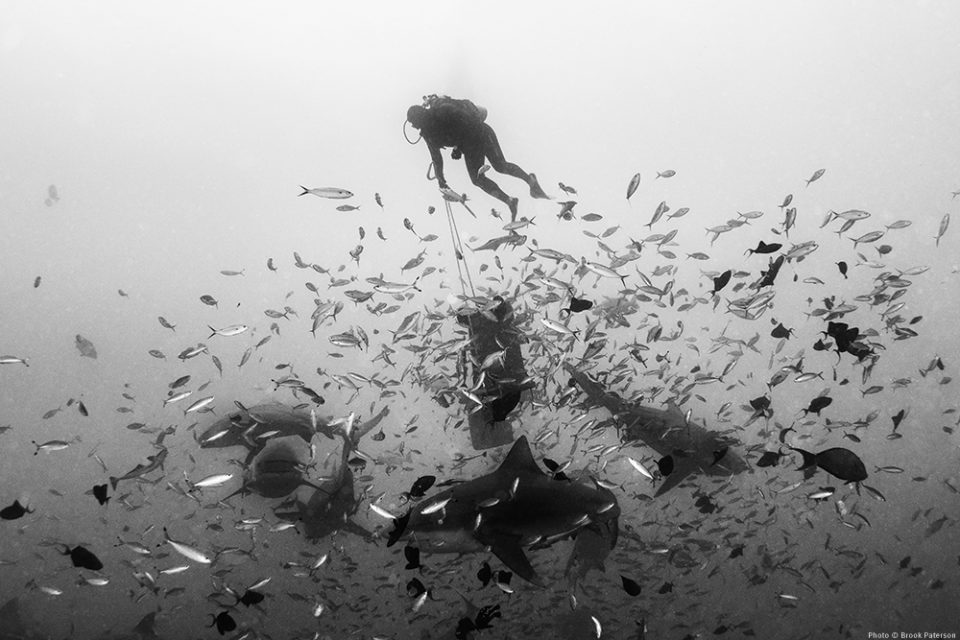 In recent years, debate on the subject of baiting the water to attract sharks has been on the rise. Many people feel that this practice may be harmful for both humans and sharks while others insist that it is necessary to help preserve the shark population.

A study published in July 2013 in Marine Policy reported that approximately 100 million sharks are killed by humans each year. This number is unsustainable and the consequences of the prolonging of this practice could be substantial to our marine ecosystems. It is reasonable to assume that most of us should have a vested interest in the preservation of the ocean’s top predator, as our own ecosystems are intertwined with the health of the ocean. But how we go about bringing awareness about the need to preserve shark populations remains a matter of controversy.

Arguments against baiting the water for sharks include the belief that sharks may become accustomed to associating humans with food. This could harm innocent swimmers or divers because more sharks may be in the area where food is frequently dispensed. In fact, this belief does have some truth in it. Ralph Collier, who heads the “Global Shark Attack File”, reported that in the short term, there may be some correlation between shark feeding and shark bites. Indeed, some areas such as Hawaii, Florida, and the Cayman Islands outlaw shark feeding.

Some argue that baiting undermines shark conservation efforts because sharks that become habituated to receiving food from humans are instead caught by fishermen taking advantage of easy prey. Others claim that operations that use bait to attract sharks for their customers are exploiting the shark population for the monetary value in tourism.

Tourism, however, may just be the thing the shark population needs. Some areas that were once fishing grounds are now protected from fishing, and the local population who once sold their catches now make their living as dive operators. It is estimated that a shark’s value when sold for food is about USD150–200. That same shark has a value of nearly USD2 million over its lifetime as a tourist attraction. Considering the number of people who now have an interest in sharks because of programmes such as Discovery Channel’s Shark Week, shark tourism has become a definite benefit for sharks.

Without images of sharks in their natural environment, conservation efforts would not be as effective. Advocates argue that photographers who take compelling images of sharks to inspire change can’t get close enough to their subjects without feeding them. In addition, allowing divers to participate in baited dives helps dispel the myths that movies have perpetuated. In truth, sharks are intelligent, graceful and beautifully  powerful animals. It is much easier to stand up for a shark when it is perceived as a majestic animal. 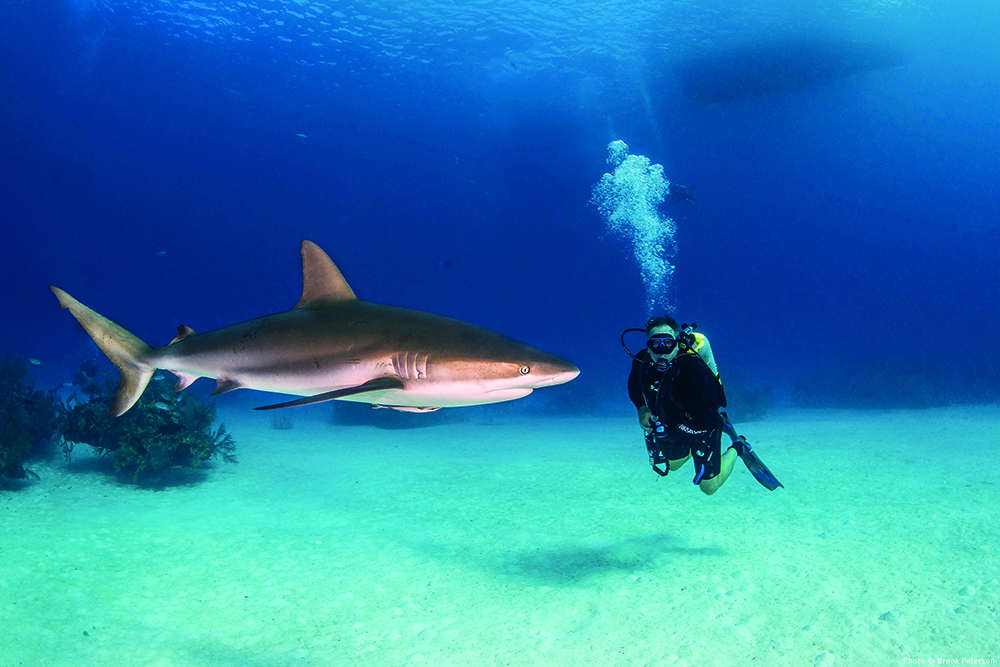 Researchers from the University of California Santa Barbara and Florida International University teamed up to try to understand how scuba diving activities over time influence shark behaviour. The scientists studied a remote area in the central Pacific Ocean called Palmyra. This atoll is in a marine protected area with a healthy shark population and is rarely dived. There is a scientific research station located on the island where researchers dive heavily while the rest of the island remains untouched by humans. The island was ideal for comparing whether sharks behave differently in locations where diving is common and those where it is not.

The scientists used a combination of survey techniques to determine the abundance and behaviour of reef sharks including baited remote underwater video systems and multi-year monitoring. Although evidence from other studies has shown that shark behaviour changes over the short term in areas that are heavily dived, the results of this study determined that behavioural changes may not persist over the long term. The scientists did not find differences in the abundance of sharks, their residency patterns, nor their behaviour between sites that were heavily dived and sites that were not. Moreover, no differences were observed between a year with substantial diving and a year with no diving on the island.

This is good news for shark tourism. The results of this study suggest that scuba divers can interact with sharks in their environment without a longterm impact on the shark’s behaviour. It also suggests that conservation goals will not be undermined by responsible dive operations seeking to promote ecotourism. It is a win for tourism, but ultimately it is a win for sharks. 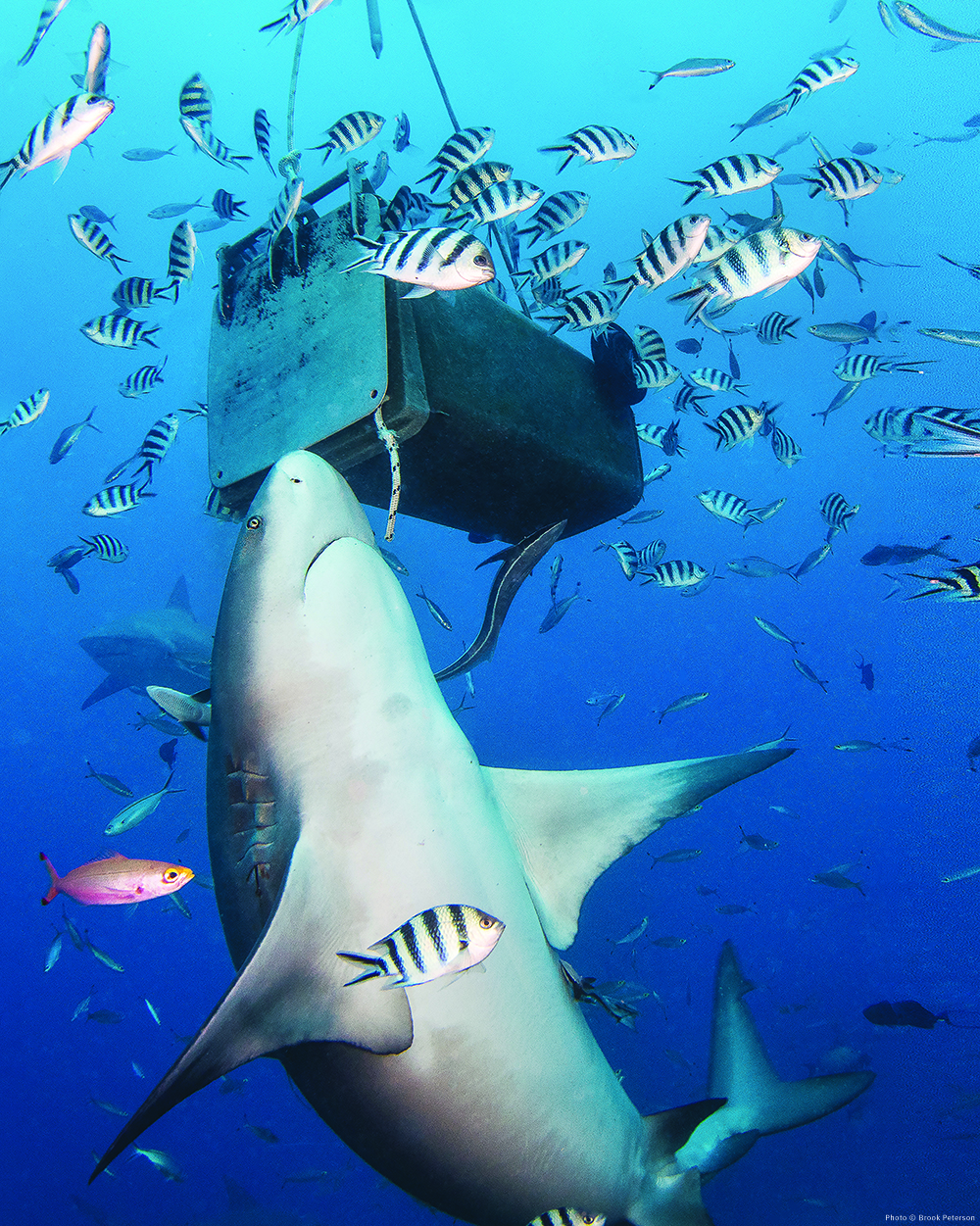 Ultimately, individuals will have to decide how they want to contribute to the preservation of the shark population. The arguments for and against feeding sharks for ecotourism are valid on both sides.

“The issue of shark diving and the use of bait to attract sharks will always be contentious,” says underwater photographer and Wetpixel editor, Adam Hanlon. “My own take is that shark ecotourism’s positives far outweigh its negatives. It provides an alternative income to fishing and finning for local people, and helps to dispel the public perception that sharks are mindless killing machines.“

Because of shark tourism, some countries have outlawed fishing and are protecting sharks. While it would be ideal to leave sharks in the hands of Nature, the time for that is past and irrelevant, as there is no time left.

Human activity has put sharks in imminent danger of extinction. Perhaps photos and videos of these magnificent animals will help to remind the public of what is being lost, and inspire change. 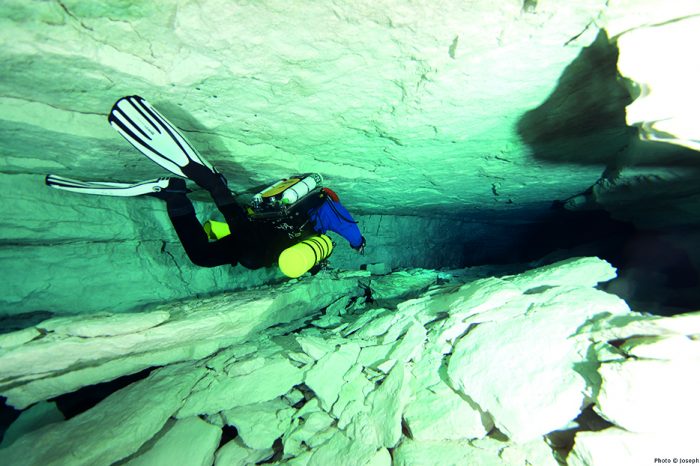 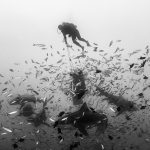