Leatherback Turtle, The grand-dad of the big blue

Sponsored by the Western Pacific Regional Fishery Management Council and run by the Marine Research Foundation (MRF) in Sabah, this ambitious project aimed to study and preserve one of the last breeding populations of leatherback turtle in the Pacific region. The nesting beach at Kamiali, south of Lae on the north eastern coast of PNG, is just 10 kilometres long but sees the arrival of roughly 100 female leatherbacks during the nesting season. Throughout the Pacific, leatherback numbers have crashed and it is on these nesting beaches that leatherbacks have suffered the most – nests are dug up by dogs, the eggs are collected for food and the occasional adult female is killed for its meat. However, by working with the villagers of Kamiali, the Huon Coastline project hoped to protect the leatherbacks’ nests and the future of this species.

Our first night out on the beach involved catching a boat ride from the village, soaking ourselves in a lethal cocktail of insect repellent and settling down to wait for any news of turtles. However, the incredible number of voracious mosquitoes and sand flies meant we were both soon walking the beach with the local rangers employed by the project. Their job was to patrol the 10-kilometre stretch of sand, looking for females coming up on the beach or hatching nests. If a female were spotted, they would keep their distance until she had finished digging and begun to lay. Only then would they measure and tag her. That first night, with the excitement of a new project and location, saw us up all night walking the beach and enduring the hordes of insects. But by the fourth night without a single nesting female, our enthusiasm started to flag. Lack of sleep and a head-to-toe covering of bites did not do much for morale. Even the dawn discovery of some saltwater crocodile tracks, not far from our camp, did little to cheer us up.

Our last night was February 14th – Valentine’s Day. By this stage, I was beginning to struggle with the thought of yet another night on the beach and it was Simon and Marcus Ruf, the researcher, who kept things going. Whilst we’d had some luck and had found a few hatching nests, the lack of females was beginning to take its toll and when we landed on the beach, I took shelter under a home-made bivy, sulking in a fog of mosquito spray, whilst the others headed off down the beach.

Finally, at about 3am, I was woken with the news I’d been waiting for – a female had been spotted not too far down the beach. After a mad rush down the beach, we waited patiently as she finished digging her nest before moving in and came face-to-face with one of the most incredible animals either of us had ever been lucky enough to encounter. She was not the largest of leatherbacks – her carapace was “just” 171 centimetres long – but to me she was perfect. Simon and I spent the next 45 minutes taking photographs and filming her, whilst Marcus and the rangers took their measurements. Eventually, just before the sun broke the horizon, the female covered up her eggs and headed back down the beach and to sea. A remarkable end to a Valentine’s Day I will never forget. 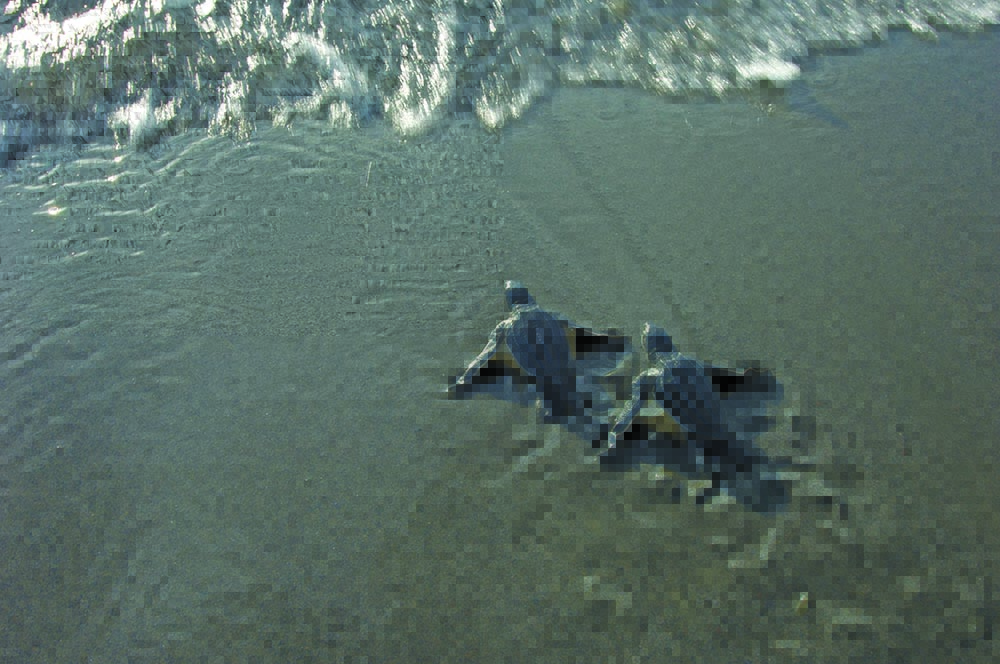 The leatherback is the largest turtle in the world. An adult can be the same length as an adult human being. It is the only sea turtle that does not have a hard shell. Instead of hard plate-like scutes that cover the shells of most turtles, the leatherback’s shell is made from dark, leathery skin. Seven ridges run down the outside of the shell giving it a streamlined appearance. Distinctively long front flippers propel the heavy body of this animal gracefully through the water. In fact, the leatherback is very fast and amazingly manoeuvrable.

Leatherbacks can dive as deep as some whales. Dives have been recorded to depths of 990 metres. Other species of sea turtles are not believed to go nearly this deep. Why? First, while the hard shells of other turtles would crack under deep ocean pressure, the leatherback’s skin compresses without breaking. Secondly, scientists have discovered that leatherbacks maintain a constant warm body temperature in cold water, between 15 and 25°C in 5°C-water. In addition to their enormous body mass and a thick layer of fat, both of which retain heat, they can constrict their blood vessels to keep vital organs warm. On a hot beach, they can reverse the process and dump heat by pumping hot blood to the skin. As the blood reaches their skin, the skin turns pink. Finally, the leatherback’s respiratory system supports deep diving by using a complex physiological trick to prevent nitrogen narcosis.

Since they can regulate their body temperature, leatherbacks travel most of the planet. They are found in both tropical and temperate waters and occasionally stray into subarctic waters. In the Atlantic Ocean, they swim as far north as Newfoundland and Norway and as far south as Argentina. In the Pacific Ocean, they travel as far south as New Zealand and Tasmania.

Leatherbacks reach sexual maturity at around 10 years of age. As males approach maturity, they produce higher levels of testosterone. The large, hard nail on each front flipper begins to curve and grows longer. Their tails also begin to grow until they become longer than the female’s. This makes adult males easy to identify. The only change in females is the production of higher levels of estrogen and testosterone. As these levels rise, they act as a trigger sending the females to their nesting grounds. Leatherbacks mate near nesting beaches and probably during migration as well. When a female leaves her nest and returns to the water, it is not unusual for a male to try to mount her. He may bite her on the head; he will try to fend off her other suitors by biting them as well. Some females mate with one male while others mate with many males. Males mate with as many females as possible. In the Caribbean, the nesting season runs from March to June. In the Pacific, they nest from October to February.

A female lays eggs every two to seven years. When nesting, she lays an average of seven clutches of eggs about nine days apart. Each clutch contains 50 to 100 eggs, but only 50 percent of them will hatch. The cause of this low hatch rate is not clear. Interestingly, after she lays her eggs, the female tops them off with 10 to 40 false eggs. These eggs have no embryo or yolk and are unique to the leatherbacks. Their function is still a mystery.

As embryonic leatherbacks develop, they are affected by the temperature of their nest. For some reason, cooler nests produce more males. The pivotal temperature of 29.5°C results in a 50-50 split between males and females. The temperature of the nest also signals to the baby turtles when it is time to emerge. To survive, they have to make their way to the ocean in the dark. Cooler nighttime temperatures trigger the exodus. If they sense that the nest is heating up – that is, the sun is rising – while trying to dig their way out, the nestlings stop digging and remain under the sand until the temperature drops.

Despite their wide-ranging distribution, the population of leatherbacks keeps spiralling downwards and the species is considered critically endangered. Harvesting of eggs for food is still prevalent in some parts of the world. Nesting grounds continue to be replaced by buildings. Death from gill nets, longlines and drift nets are other major contributing factors to the leatherbacks’ demise. 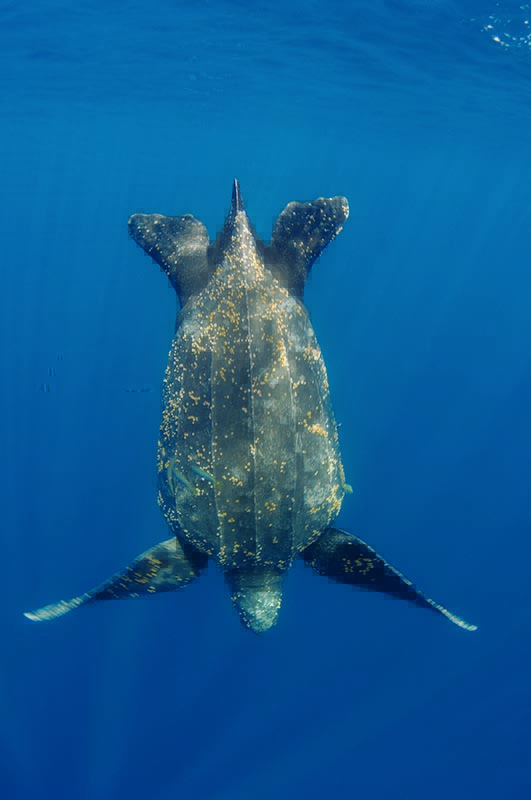 There are a number of nesting beaches found in South East Asia including the east coast of Peninsular Malaysia, Sorong in Papua and the Huon coastline in PNG. Most of these locations have NGOs working to protect the nests and it is of utmost importance that permission be sought to visit them for images and that guidelines are followed when watching nesting behaviour: flashes are usually banned when turtles are laying eggs and can only be used once the turtle has finished covering her nest and is ready to make her way back to the sea. When shooting hatchlings try to get as low as possible, make sure their route to the water is not obstructed and, if allowed, try some half-and-half shots as they enter the water.

If it’s shots of adult leatherbacks underwater that you are after, then there is one place in South East Asia that offers the opportunity to capture these images. Kei Islands, east of Ambon in Indonesia, are a small group of islands where an annual mass congregation of jellyfish occurs and the leatherbacks follow their favourite food.

There is no dive centre, no resort or even any boats resembling a dive boat. Instead, there is a small village and dugout canoes used for fishing. WWF Indonesia have a small research base from which they have been collecting data on the hunting of the leatherbacks carried out by two of the small villages. To see and photograph the leatherback turtles, you have to head out early each morning in one of the dugout canoes with a couple of guides and search for the turtles resting on the surface. Once spotted, the boat gently creeps toward it whilst you get prepared with your fins, mask and snorkel and then slowly slip into the water. The best approach is to slowly swim toward the turtle and freedive as it takes its last breath before diving. If you are lucky the turtle will not be afraid and will hang around, taking breaths of air at the surface. The turtles are hunted; as expected, I have found them to be very afraid and very shy. Only once have I had one that stayed for more than half an hour.

Freediving rather than scuba diving means you have better manoeuvrability and speed. It also makes entry and exit from the small boats much easier! The leatherbacks can move fast so having good freediving skills and using a weight belt certainly helps to get down deep fast.

I used a Nikon D2X with the Tokina 10-17mm lens and most of the shots were taken at the 17mm end of the zoom as very close encounters were far and few between. The encounters were very similar so I used manual exposure/shutter settings and Inon strobes. Ambient light may have been fine for some of the images but I always tried to get slightly below the turtles so the strobes were certainly useful in lighting the underside of the turtle. If you are extremely lucky you may encounter a leatherback completely relaxed and, therefore, have time to compose and plan your shots. However, most of my encounters have been with very skittish individuals and therefore I only had time for two or three frames. Knowing what type of shot you are after and having the correct settings ready on your camera makes all the difference. On my first trip to Kei I had one individual that actually became quite aggressive and even bumped the port of the camera; unfortunately, I was using video at the time and not my Nikon.

Life Expectancy: Not yet confirmed

Size: 1.32 to 1.78 m, Size differences between male and female vary depending upon development and individuals’ original geographical location

Distribution: All oceans except Arctic and Antarctic 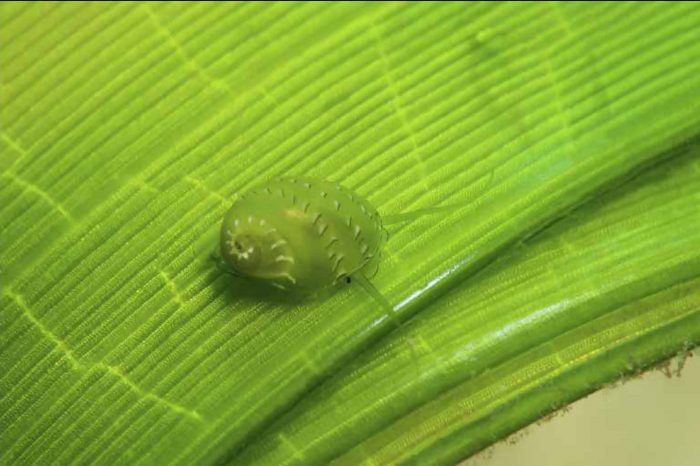 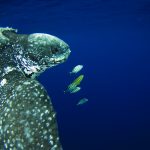 Leatherback Turtle, The grand-dad of the big blue