Kwajalein: The Most Exciting Place You've Never Heard Of

It is hard to pronounce, even harder to spell, and most people have no idea where it is. But Kwajalein is one of the world’s largest atolls: It’s part of one of the largest shark sanctuaries, played a role in the Pacific theatre of WWII, and boasts some of the most pristine reefs on the planet.

Located in the geographic region of Micronesia, Kwajalein (kwa-ja-leyn) is one of 29 atolls belonging to the Republic of the Marshall Islands. So far to the east, the Marshall Islands are just slightly west of the International Date Line and just a bit north of the equator. The islands cover over 1.26 million square kilometres (larger than South Africa), although only 171 square kilometres of that area is land (about the same size as Indonesia’s Komodo Island).

Atolls are ring islands that enclose a saltwater lagoon. They are formed by coral reefs that built up around a former island that has since disappeared over millions of years due to erosion. Flat and skinny islands of sand are left behind, usually with sheer walls on the ocean side and a protected lagoonal area fed by tidal influxes on the inside.

For Kwajalein this means spectacular walls dropping hundreds of metres right offshore with untouched, healthy corals and lots of pelagic life, and a lagoon of around 20 to 40 metres deep with sporadic coral heads and, thanks to World War II, copious wrecks including American and Japanese warships and planes. 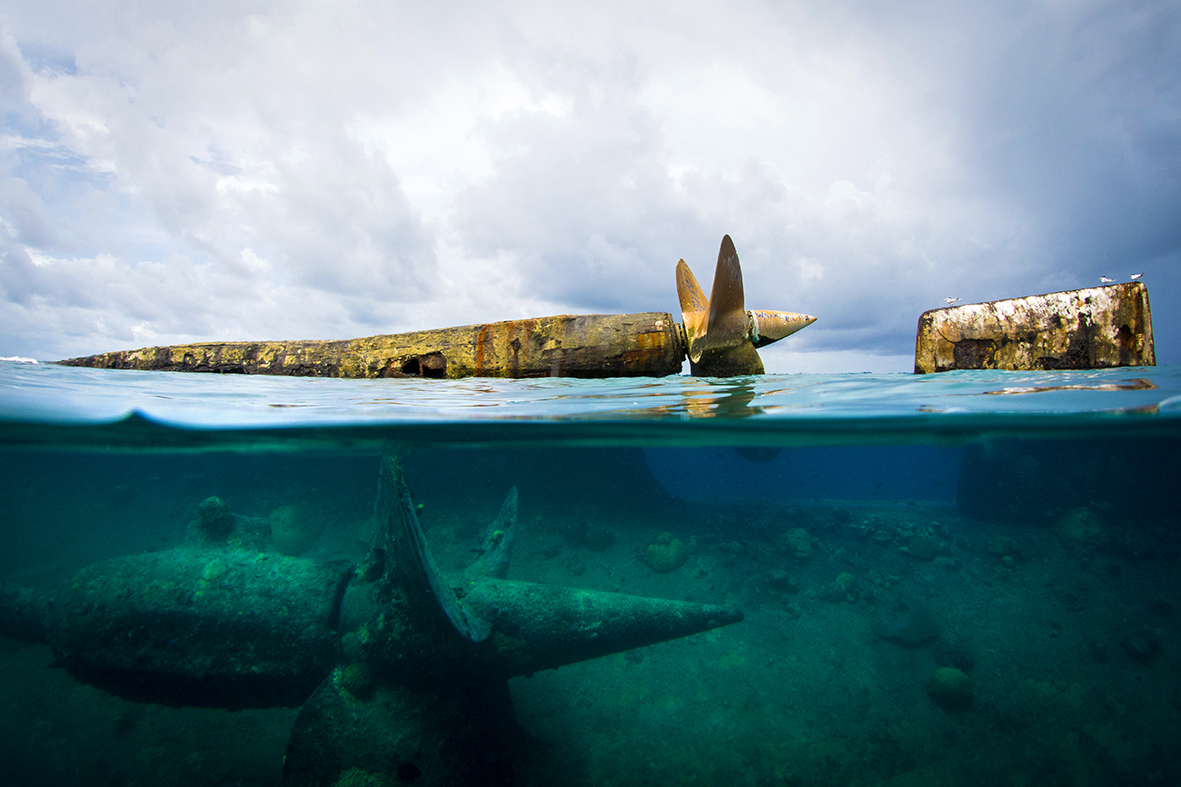 Getting to the Marshall Islands must have always been an adventure. Today’s sailors have extensive GPS and electronic navigation systems to help them and there are limited (although sometimes unreliable) flights to this remote location. But how did early navigators possibly find these islands in the first place?

Little is known about those who first arrived in the Marshall Islands over 3,000 years ago. It is not clear where they came from or how they found their way to this remote corner of the Pacific Ocean, over 5,000 kilometres east of the Asian continent.

Once here, navigators used stick charts to navigate. Stick charts were handmade coconut frond and shell maps used to depict islands and prevailing ocean surface swell patterns. By memorising these patterns, navigators could move from island to island without the use of GPS, compasses, or maps as we know them. 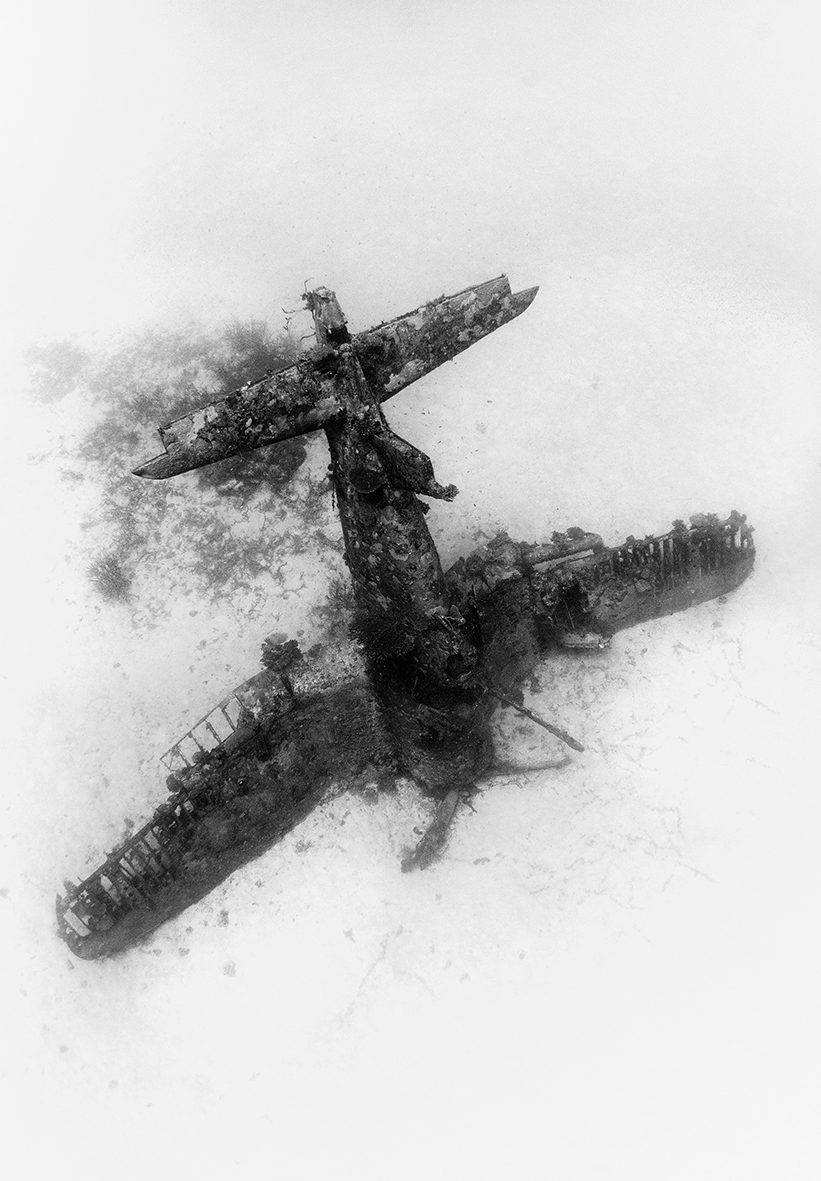 The lagoon of Kwajalein Atoll is the resting place for a huge concentration of Japanese and American WWII wrecks, including more than 25 ships and over 160 planes. The Japanese took over and colonised the Marshalls in 1914 and used Kwajalein as an important military defence base during WWII. In early 1944 American forces invaded Kwajalein, bombarding and destroying all of the Japanese aircraft and sinking many ships.

These wrecks have become stunning historical monuments, covered in sponges and corals and teeming with fish life. Whitetip sharks can be seen resting on the submerged decks and schools of batfish patrol the kingposts, seeming to watch over the ship and coming in close to inspect divers as they explore the wreck.

When the war ended, the Americans were faced with the question of how to get their excess materiel back, including around 150 planes. It was decided it would be cheaper to get rid of the planes than to bring them back on ships, so they were simply pushed off the back of barges in the lagoon near Roi half a dozen square kilometres. These planes can be found at both deep and shallow diving depths, most around 30 metres, and in one area as many as 13 planes can be seen on a single dive.

The Airplane Graveyard has been called the most extensive collection of American WWII planes in one place. You’ll find Corsairs, Wildcats, a Helldiver, Avengers, Dauntless, PBJ-IH Mitchells, and more. Most of them sit on the sandy bottom looking like they have just landed, while others are nose down, upside down and in all other directions. There is also a Japanese Zero, which likely went down as a result of an accident while it was trying to take off or land before the end of the war.

On the other side of the world, the Prinz Eugan, a German war cruiser, was given to the United States as a prize of war at the end of World War II. It sailed from the Northeast Atlantic to the east coast of the US, where it was decided the Eugan would make a great addition to the 95 ships of the “nuclear fleet”. Continuing its journey west, the Eugan was towed through the Panama Canal and moved into the Pacific, making its way to the Marshalls. 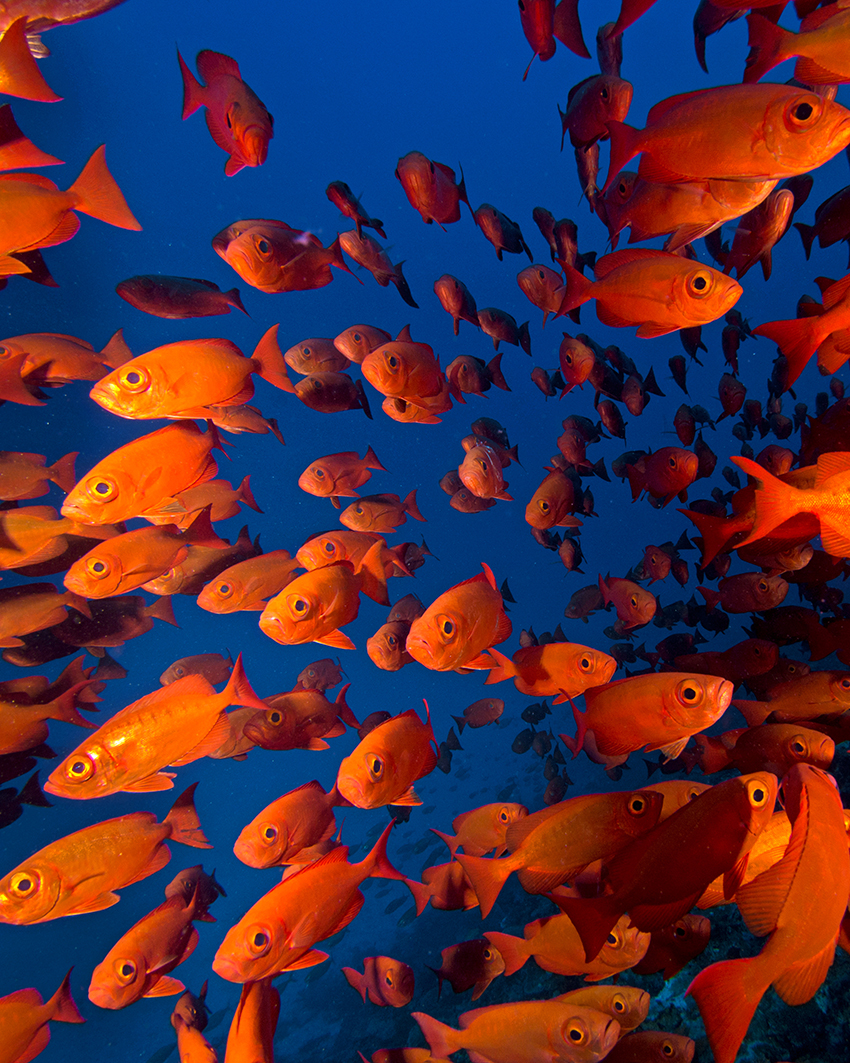 In 1946, several hundred miles from war-ravaged Kwajalein, those 95 ships were being lined up in the lagoon of Bikini Atoll for Operation Crossroads. They were to be used to investigate the effects of nuclear weapons on warships. Two “Fat Man” plutonium implosion-type nuclear bombs, named the Able and the Baker, were dropped on the Eugan and the other ships.

At the end of the test, only nine ships had survived enough to be moved, and the Eugan was towed back to Kwajalein Atoll for further studies. Although most of the structure was intact and the ship was in fairly good condition, a small leak in the hull would be its demise. Due to the residual radiation no one could board the ship to repair the hull. It sank in shallow waters next to the island of Enubuj (also known as Carlson).

Today the Prinz Eugan can be seen by anyone who flies to Kwajalein or sails near the south part of the lagoon. One of the two remaining props and the rudder stick out of the water. Boats anchor next to the ship close to the island and divers descend to about 12 metres to see the top deck sitting at an angle in the sand. Large marble rays are common under the deck and coral-encrusted ladders, winches, and other machinery can be seen. The ship lies on a slope that proceeds to around 40 metres where the bow is in the sand. Many port holes give views of upside down beds and chairs and one opening shows six possibly still live torpedoes stacked on top of each other.

Ammunition can be found in the sand below the wreck as can whitetip reef sharks sitting in the sand. At the stern of the ship, brave divers can swim underneath it to the other side of the wreck and then ascend up the massive hull to the top of the ship, which is actually the bottom. This part of the ship is covered in coral, and large schools of parrotfish, fusiliers, and others dart back and forth around the hull. 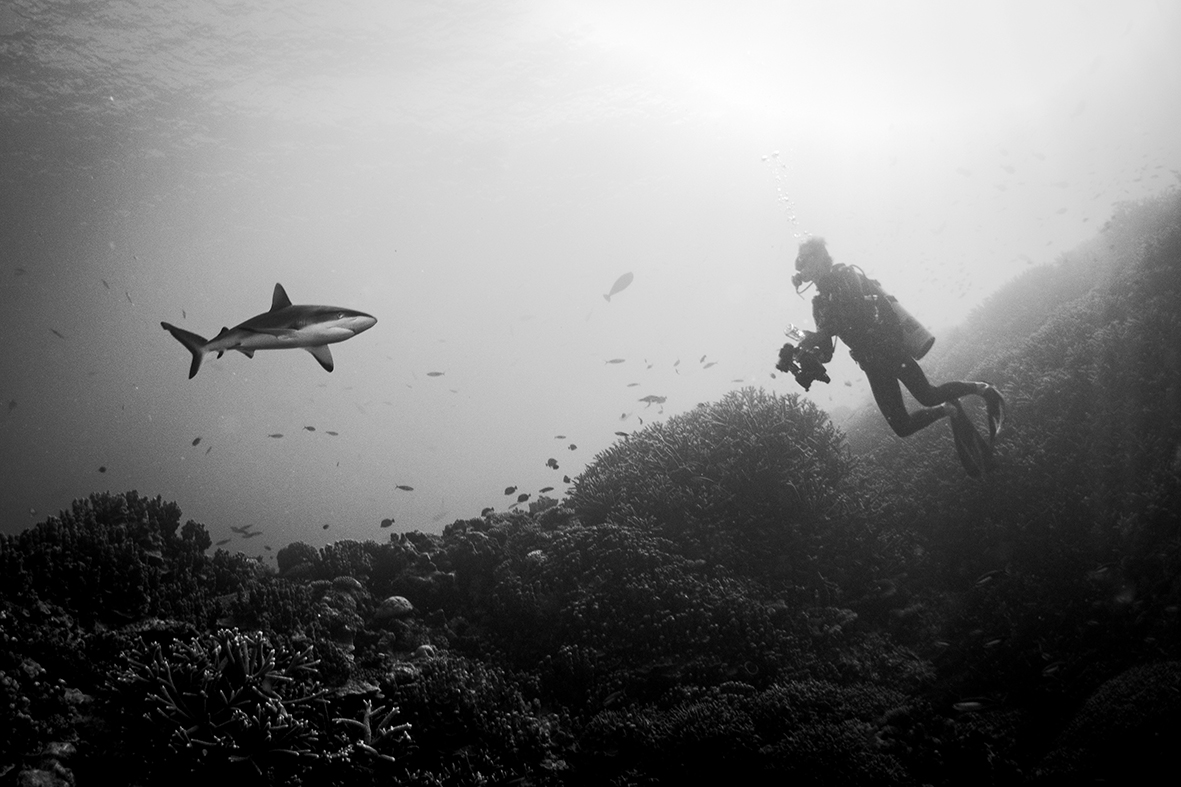 If the wrecks don’t do it for you, the healthy waters are also
abundant with diverse marine life © Brandi Mueller

It still isn’t easy to dive Kwajalein Atoll. One commercial flight does arrive six days a week from either Guam or Hawaii and only transient liveaboard dive boats occasionally make their way to Kwajalein (usually to continue to Bikini Atoll). There are no commercial dive operations although the army base has an active scuba club for those stationed or working there.

The WWII wrecks have been underwater for 70 years and are encrusted with coral and sponges. Most of the wrecks are home to various turtles, sharks, barracuda, schools of curious batfish, and an array of reef fish.

Once a diver has seen the wrecks, a trip outside the lagoon reveals an entirely different world: sheer walls dropping away into the blue; untouched, pristine coral extending down as far as you can see; sea fans larger than most people, coral heads that look like they’re on steroids, and countless fish of all shapes, sizes, and colours. A glance out into the blue usually rewards divers with sightings of schools of tuna, eagle rays, and even a whale shark or two. The islands are visited by multiple species of whales, dolphins and sharks.

Within the lagoon, random coral heads emerge out of nowhere. One particular favourite is known as Troy’s Coral Head, where shark sightings are virtually guaranteed. Often a large bait ball is circling the coral head with sharks patrolling it, occasionally taking a bite from 5 the fish buffet, but otherwise just wrangling the fish for dinner at a later time.

If the wrecks, rays, corals, dolphins, and sharks don’t please you, I’m pretty sure nothing will. But to step it up one more notch, things are still being discovered in Kwajalein’s lagoon. The search for other warships and planes continues to this day – several of which are known to be out there somewhere, but it is more than likely that there are many more waiting to be discovered that no one has any idea about at all. 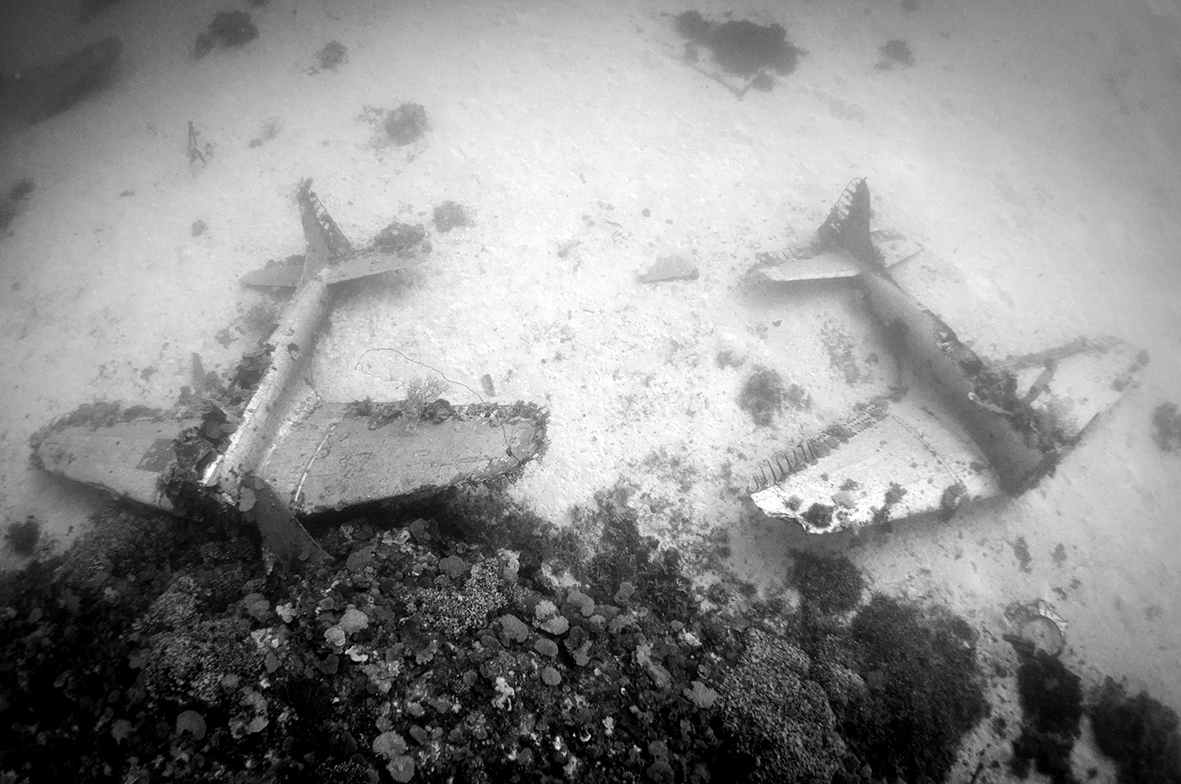 Some places are simply never boring, and this, at Asia-Pacific’s easternmost boundary, is one of them. Kwajalein, the most exciting place you’ve probably never of heard of (before now), is simply bursting with the kind of subsea adventure that would satisfy even the most daring of explorers.

Brandi Mueller is a dive instructor and boat captain and has been diving for over half her life. Brandi’s obsession with the sea began at age 15 when she explored diving for the first time as an exchange student in New Zealand, and culminated when she became an instructor at age 21 after studying seagrass in Florida. These days, when not driving the boats or teaching divers, she is most happy underwater with her camera. 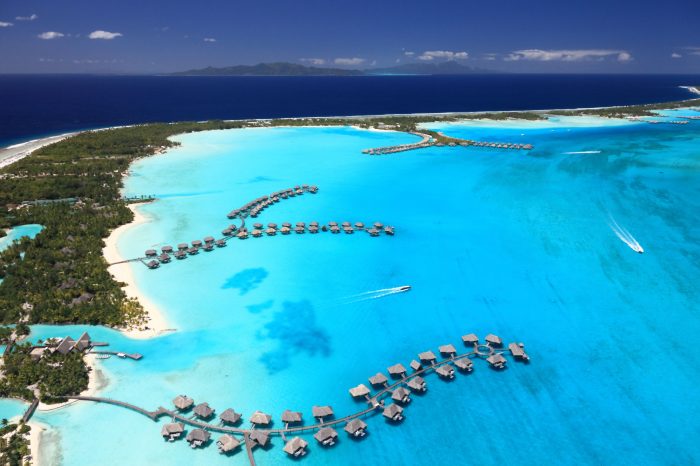 6 of the Most Remote Diving Destinations in Asia-Pacific 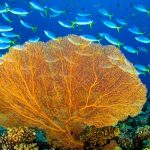 Kwajalein: The Most Exciting Place You've Never Heard Of