The first day of the Philippine Depth National Championship 2019 saw new national records being set for China, Ukraine, Malaysia, Ireland, Philippines and South Korea. Underwater360 has all the details 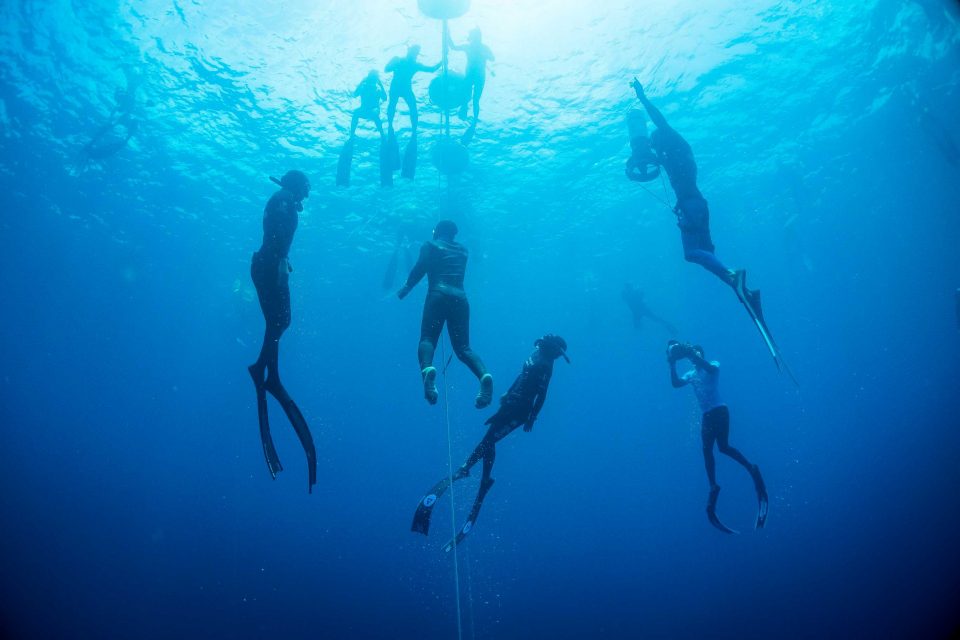 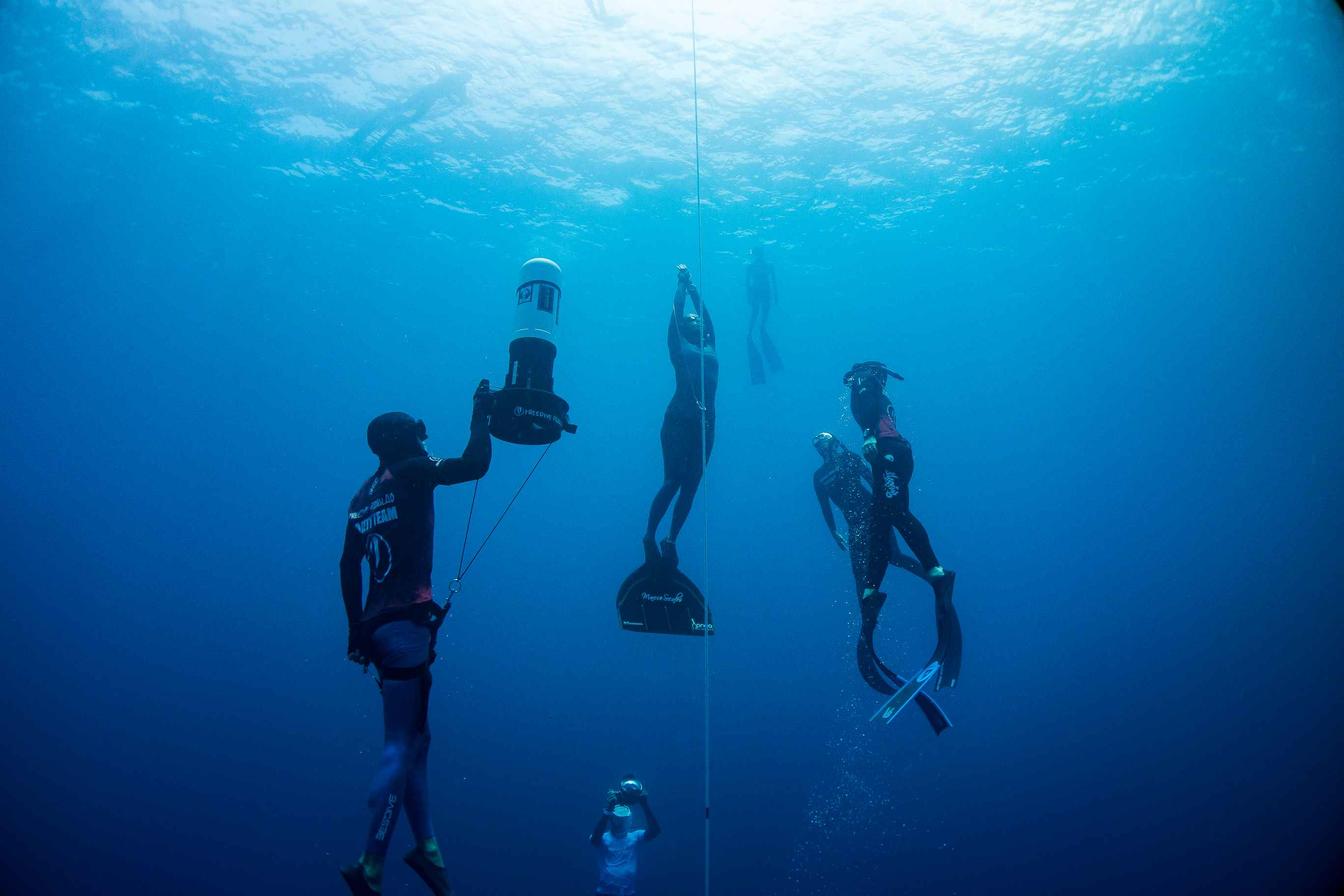 The day, however, started with a near miss as Thibault Guines of France was disqualified for failure to perform surface protocol.

“The conditions were absolutely perfect today. Very flat water, warm water, good visibility, organization is perfect, everything was good, but for me, today was not the perfect dive,” said Thibault  to Underwater360 after his dive.

“Actually this was like the first time in competition I tried to go without any warmup. I felt a bit different from usual and I felt like I was much shallower so I turned early thinking I wouldn’t make it to the bottom but (actually) I turned early very close to the bottom. But it’s ok. In competitions, it happens . And I don’t really mind because it gave me a lot of confidence for tomorrow. I will be a bit more focused on which depths I am (at), and I’m pretty confident tomorrow I am going to do it properly.” 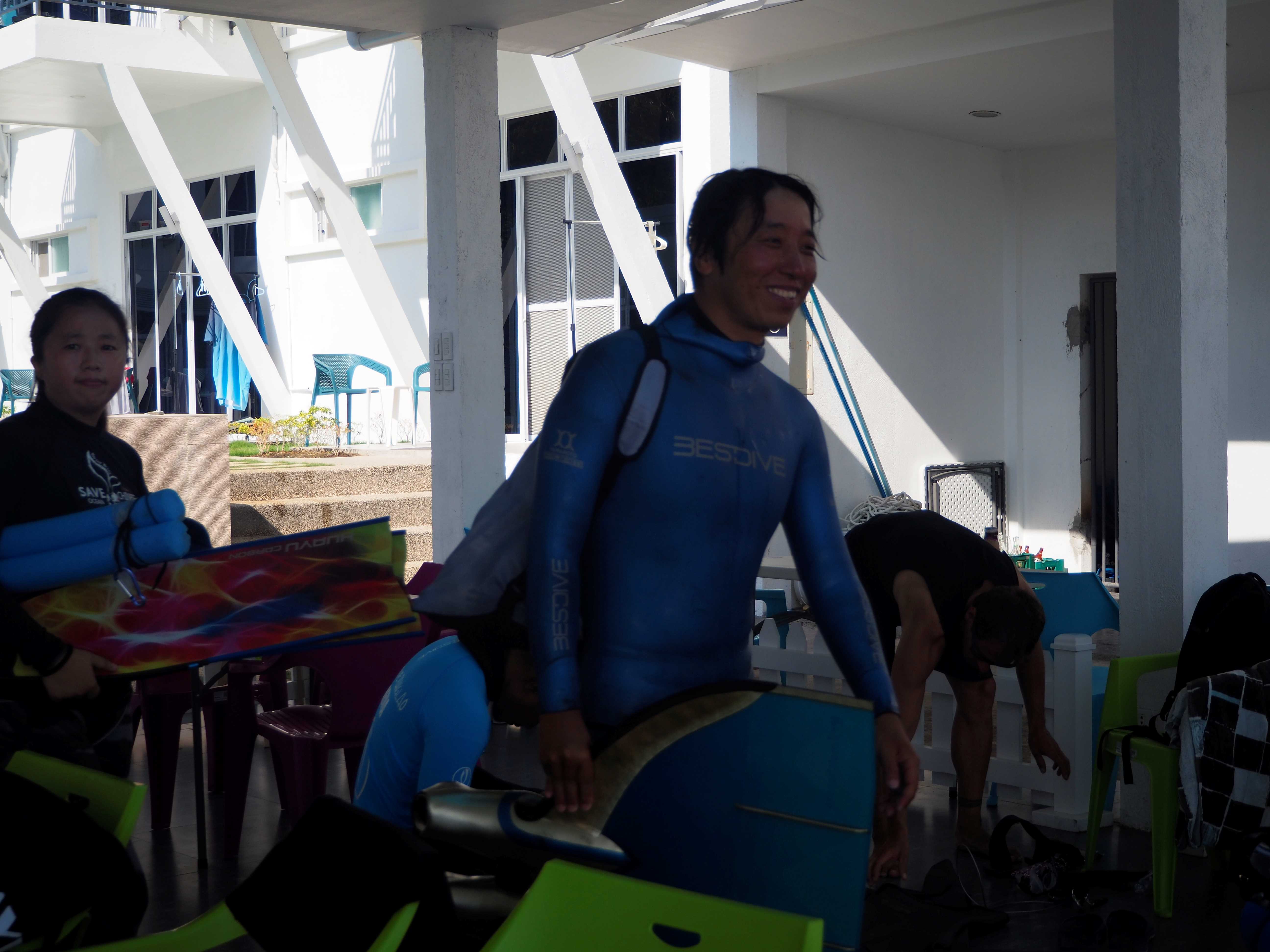 Wang Jin (Sendoh) on his way to a new national record

“Before the contest, I was quite nervous, actually,” said Sendoh to Underwater360. “Because this was my first competition for the year and I really didn’t get a good night’s sleep but once I got into the water I was fine. The conditions are better than the area I usually train at so I felt very relaxed in the water because there were no currents and thermocline. It felt pretty great!”

Even with a new record in the bag, there is no letup for Sendoh as he resumes training tomorrow – his philosophy for success is predicated on consistency. 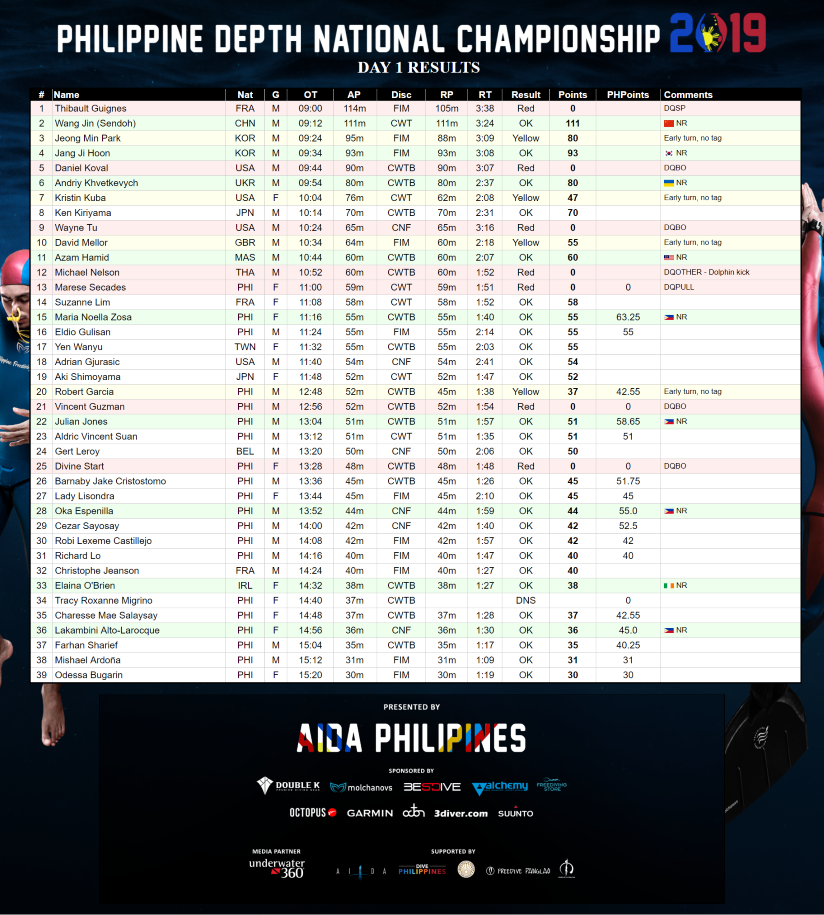 The official results for Day One

For Eldio Gulisan (Philippines) though, the PDNC is not a quest for glory but a chance to lift up his people. A member of the famous Sama tribe, an indigenous group whom have traditionally been sea nomads living off the catches they retrieve from the bottom of the ocean, the Sama are famous for their natural freediving skills which they’ve honed for generations. 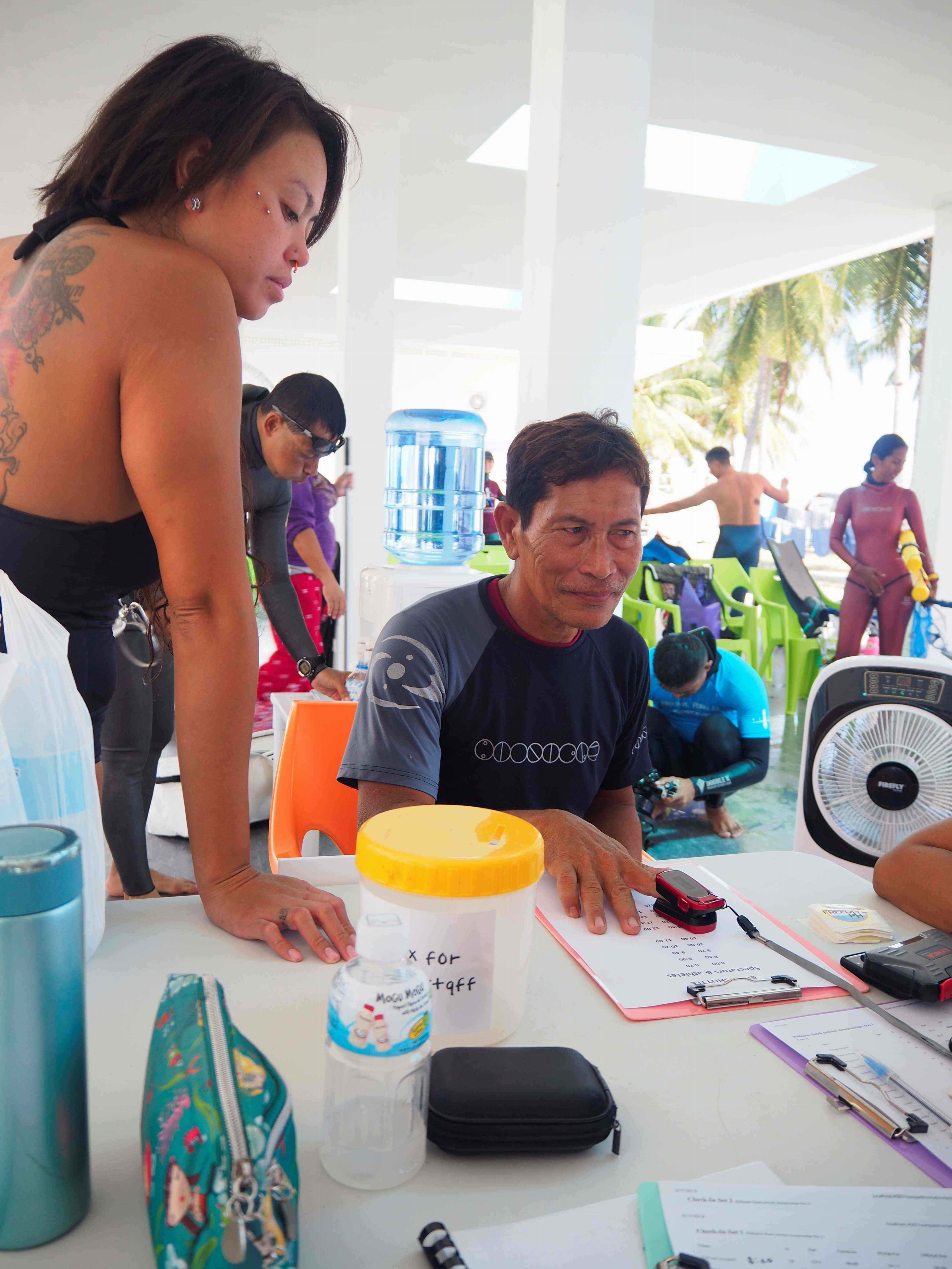 Odessa (Left) and Eldio (right) registering at the competition

Speaking to Underwater360 through his “coach” Odessa Bugarin (Philippines), who was also competing at PDNC, Eldio has only “freedived” six times within the structure of a modern freediving competition, having been naturally freediving without any protocols or rules all his life, like most Sama tribes people.

In order to prepare for the PDNC, Odessa agreed to instruct Eldio on the idiosyncrasies and protocols of static and dynamic freediving.

“The handlers of their tribe and he, we all decided that I come to train with him so that he will know all the surface protocol and stuff,” said Odessa.

“So we decided to train him first in the pool, static and dynamic because we wanted him to get used to the techniques. We didn’t want him to be shocked by the atmosphere of freediving competition, so we brought him to Moalboal, Cebu on May 5, 2019, for the Moalboal Static Competition where he was able to pull off a five minute five second breath hold, that’s his first competition!”

The most impressive part of Eldio’s ability is that he has been freediving without doing the modern freediving, big full breath.

“Everybody was so impressed that he’s still able to pull off a five minute breath hold with just a simple small breath. And even now it’s (with) a simple small breath (that) he went down to 55 metres. The Sama tribe would be very proud of that. He will surely inspire a lot of young Sama.

Odessa, Eldio and the Sama tribe have plans to bring the talents of the younger Samas to the sport of freediving. They hope freediving can reveal the Samas’ talents to the freediving world and envision a future where all Sama tribes people will be able to “get the same attention as a normal Filippino gets from the government such as a birth certificate and the proper educational programmes”. It’s an ambitious goal but if the Samas’ natural freediving abilities can lift up their entire tribe, that would be worth more to Eldio than any sports prizes that he can win on his own. 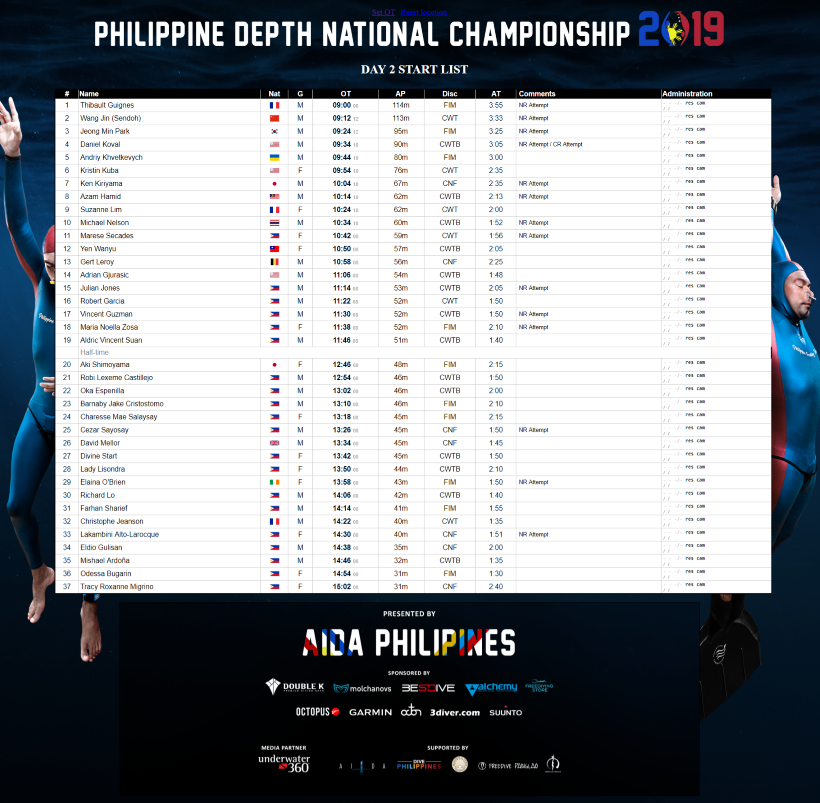 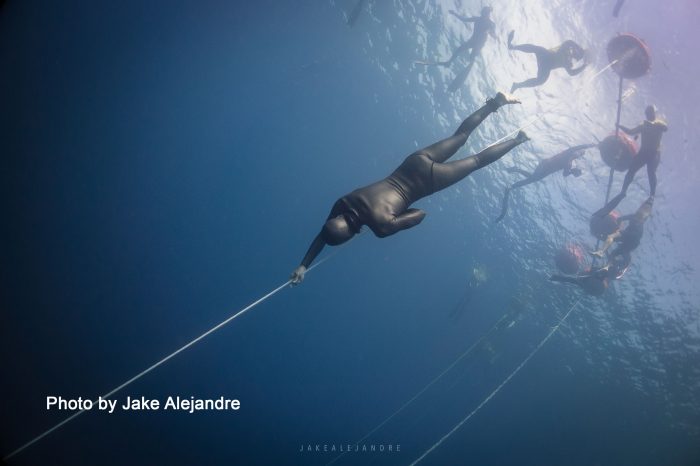 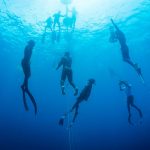