Strange Sea Creature Fossil Hauled Its Offspring Around "Like Kites"

A 430 million-year-old sea creature – predating the dinosaurs – has been discovered by scientists in the UK, and apparently has one extremely odd method of keeping her kids under check during maternity: dragging her offspring around on strings like kites.

The fossil has been given the nickname “kite runner” and ten capsules hitched to its back appear to contain young offspring, all at different stages of development. “There isn’t an animal today that it’s essentially related to,” David Legg told the BBC, a palaeontologist from the Oxford University Museum of Natural History states. As reported in the journal PNAS, the many-legged, eyeless, one centimetre animal is not directly related to any living species.

“It’s what we refer to as being on a stem lineage. So it belongs to a group that would have evolved and diversified before the modern groups did.”

The fossil was discovered from a site in Herefordshire – green hills that roll past the horizon, sheep that graze on riverbanks and cottages “skewiff” in micro-canyons, before being taken to Oxford and computerised. The process of building a 3D reconstruction of the specimen involves cutting up the specimen, bit by bit, and photographing each of those sections.

Then, the quirky animal is pumped full of life and colour onto computer screens. Graffitied with hues vaguely reminiscent of those of the Queen “Hot Space” album cover, and furiously waggling its skimpy legs, “kite runner” looks more like something scientists would discover on the far-flung planet of Kepler-186f than in the British countryside.

With the creature crawling around the thousands of pixels on his computer screen, Dr Legg and his colleagues set about categorising it using “compositional phylogenetics”.

The process suggested that Aquilonifer spinosus was a mandibulate: It belongs to the same broad group as modern insects, crustaceans and centipedes – but is not a direct ancestor. 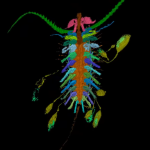 Strange Sea Creature Fossil Hauled Its Offspring Around "Like Kites"