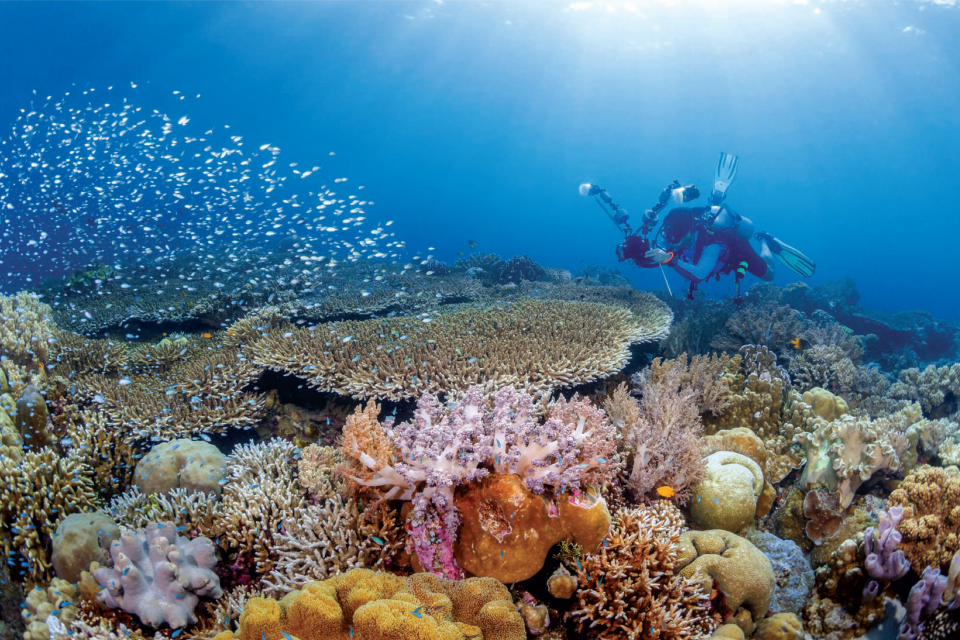 Are we healthier and happier when we are around or in the water? There is an emerging school of scientific thought that supports this idea and the concept of the “blue mind”. This phenomenon is described as a mildly meditative state of calm unity, and a sense of general well-being that is created when humans are near or in water. This hardly comes as a surprise to those of us who dive and snorkel, especially when we do so at beautiful locations such as Wakatobi in Southeast Sulawesi, Indonesia.

The phenomenon known as the blue mind was first popularised by marine biologist Dr Wallace Nichols. After devoting much of his career to sea turtle research and conservation, he shifted his focus to the study of what he feels is a deep connection between humans and water – especially blue water. “We are drawn to water, because we come from, and are still largely made of water,” says Nichols. “In fact, the human body is about 60 percent water, and the brain is 75 percent water. When you see water, when you hear water, it triggers a response in your brain that you’re in the right place.”

Scientists have long known that the atmosphere at a beach or on the ocean contains elevated levels of negatively charged ions. These ions cause the brain to release mood-enhancing serotonin and to reduce blood lactate levels. Now, as neurologists and psychologists turn their attention to the effects of water environments on the brain, they are finding scientific evidence that validates Nichols’ concepts of the blue mind. Using imaging techniques such as CT, PET and MRI scans, researchers have shown that proximity to water will increase the levels of certain “feel-good” hormones such as dopamine and oxytocin within the human brain. At the same time, levels of the stress hormone, cortisol, drop significantly. Equally interesting are indications that the human brain seems to prefer the colour blue to all others, and that proximity to water increases the brain’s ability to focus. Additionally, being in or near the water amplifies the calming effect that is associated with all human contact with the natural world. 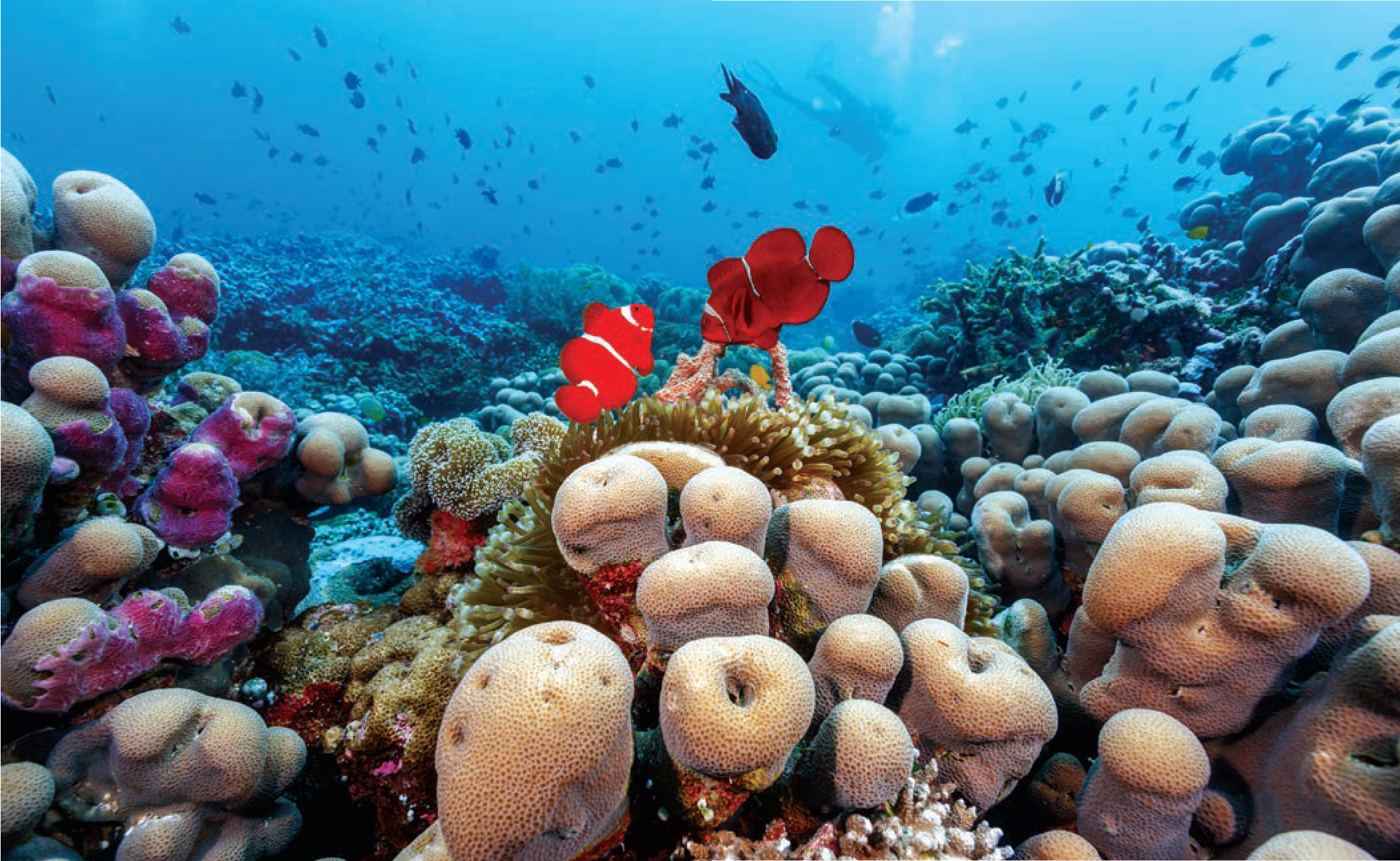 The underwater world, in general, provides a predictable, calming setting, which induces a state of relaxed blue mind. Image by Marco Fierli/Wakatobi

THE PLEASURES OF RED AND BLUE

In contrast to the relaxed condition of the blue mind, brain study has also identified an alternate state known as the red mind. When a person is in a state of red mind, they produce higher levels of stress hormones and place the brain on a higher state of alert. There are times when the red mind state is desirable, as it heightens survival instincts, and provides the motivation needed to address demanding and difficult situations or to adapt to new and unfamiliar environments. What Nichols and other researchers find most interesting is that the interplay between blue mind and red mind states can occur when a human enters the water.

In general, the underwater world provides a predictable and calming setting, which induces a state of relaxed blue mind. But as all divers and snorkelers know, the underwater realm is also an ever-changing realm where the unexpected can appear at any given moment. Even in a relaxed state, some part of the brain continues to look for the unexpected. Unexpected events will trigger a brief surge of the red mind, causing the brain to release dopamine, which creates a sense of surprise and novelty.

“The human body is about 60 percent water, and the brain is 75 percent water. When you see water, when you hear water, it triggers a response in your brain that you’re in the right place”

In a recent interview, Nichols described the interplay of red and blue mind that takes place near water. “In or near water, there’s a high degree of predictability,” he said. “The background we see

is fairly controlled, which allows part of the brain to relax. Against that consistent background, the brain continues to search for something that wasn’t there before, since the essence of survival is the correct interpretation of things that don’t fit in the landscape. This is regularity without monotony,

the perfect recipe for triggering a state of involuntary attention in which the brain’s default network essential to creativity and problem-solving gets triggered.” 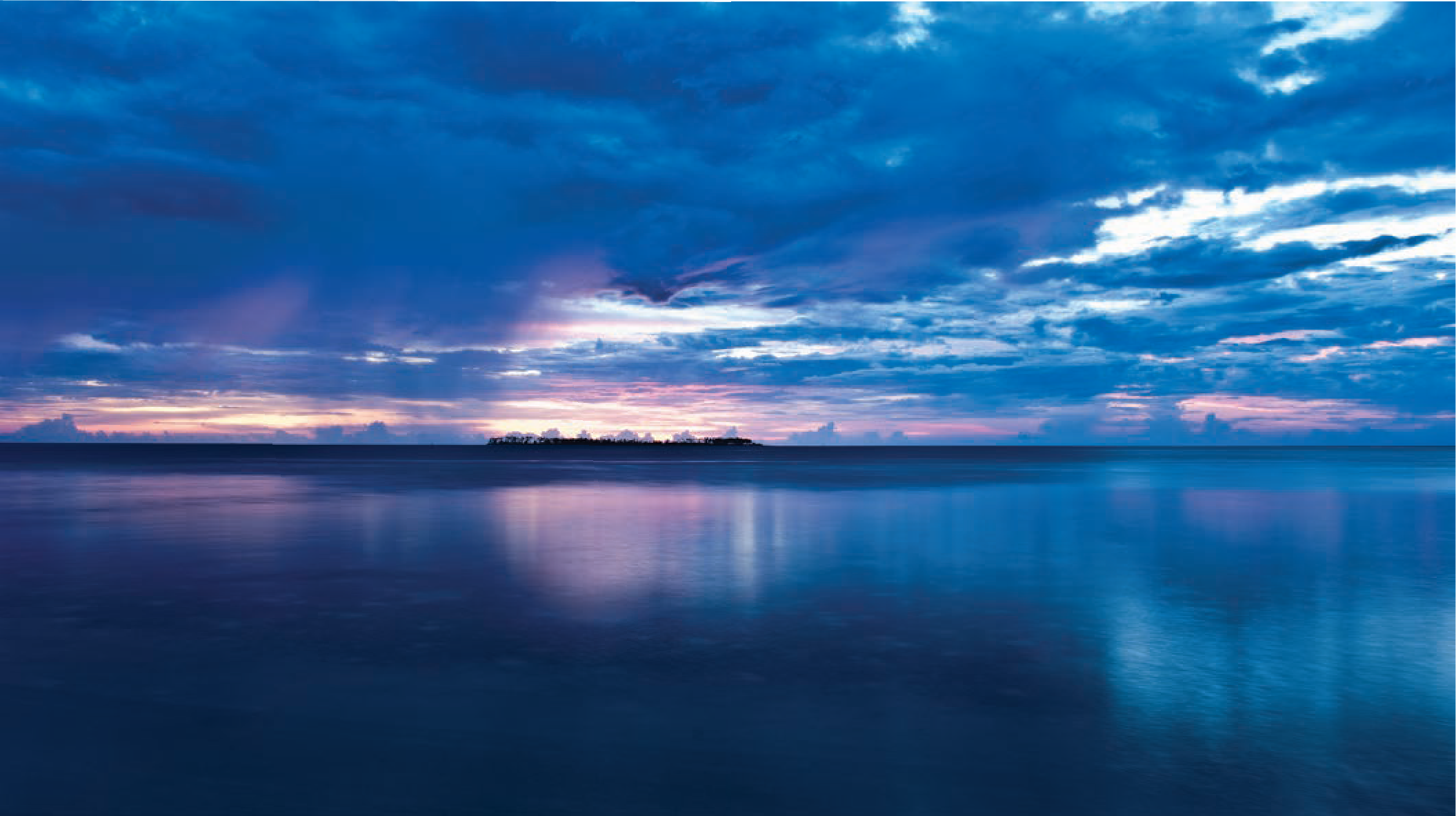 Views like this one from Wakatobi’s jetty – at any time of day or night – can trigger cognitive and emotional responses that suggest “you’re in the right place”, according to Dr Nichol’s research. Image by Warren Baverstock

Can a visit to locations such as the reefs surrounding Wakatobi Resort create a state of blue mind? The comments and memories provided by the resort’s guests in many ways mirror Dr Nichols’ findings. “When I’m drifting with the current on a reef at Wakatobi, I feel relaxed and at peace with the world,” says Kathy Beech. “The reef and fish come in all colours of the rainbow, and surrounding it all are the blues in every shade of the deep. More than just blues, I am surrounded by the indigos of the depths, the cobalt of the sky, and the turquoise of the shallows. That’s what comes to mind when I close my eyes and think back to a dive,” she says. Kathy has travelled to Wakatobi three times, most recently on her honeymoon with husband Jim, who also shared memories that mirror the mixture of red and blue mind. “At Wakatobi, you can switch off mentally and relax in an aquarium-like environment, but then there’s also the excitement of seeing an unusual creature you’ve never seen before, or one behaving in a memorable way.”

In addition to the mental relaxation of diving at Wakatobi, Kathy says she enjoys an enhanced sense of physical well-being. “I feel fitter and more flexible after diving,” she says. “Though it’s not strenuous, diving and snorkelling is a great form of exercise for toning both body and mind. It also allows me to indulge in the wonderful food at the resort and not put any weight on.” In fact, she says, “I returned home a couple of pounds lighter – and that’s after having the famous Pelagian liveaboard’s ‘two breakfasts a day’ for a week.” The exercise and fresh air also promotes restful sleep, Kathy says.

For Lisa Carroll, the blue mindset began even before she arrived at Wakatobi. “Looking over the ocean while flying in, and realising we would explore this vast area, gave me an adventurous yet peaceful mindset for our trip,” she says. “Being in the ocean allows me to disconnect and focus on the surroundings. This feeling allows me to wonder, and creates a sense of freedom. It’s not just the weightlessness of being in the water, but the total peace below, watching marine life going about their daily activities and not being engulfed in your own.” Lisa has many lasting memories of Wakatobi, ranging from seeing dolphins frolic in the bow wave of the Pelagian to witnessing the mating rituals of the mandarin fish at Magic Pier. Most of these memories are couched in shades of blue, she recalls. “Everything from the deep crystal blue hues at the drop-off, to the pastels at the reef’s peak is what has stayed in my mind and often comes back to me, sometimes when I most need to chill out,” Lisa explains.

In the coming years, neuroscientists and psychologists are likely to continue their study of the blue mind. Meanwhile, those of us who know and love the ocean don’t need research to confirm what we’ve already experienced. Spending time in the blue will not only allow you to relax and put your mind at ease, it can also revitalise your spirits and leave you with an enhanced sense of clarity and purpose. This may very well be the best therapy of all. 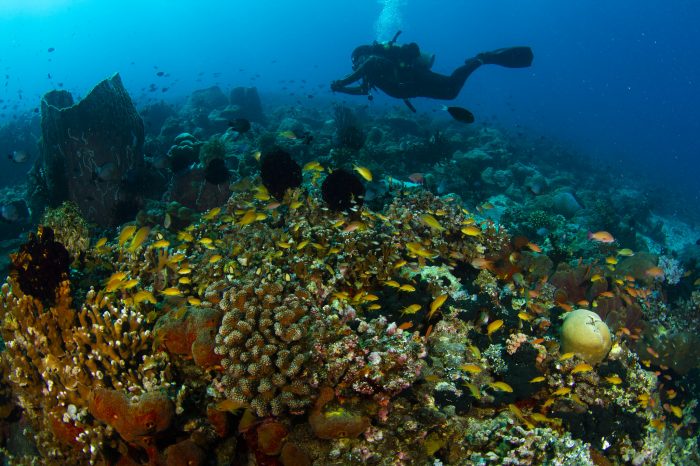 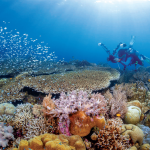