For some, cold water diving is a refreshing change from the cerulean waters of the tropics, offering once-in a-lifetime encounters with some of Nature’s largest, rarest and downright weirdest. Many that take the plunge down narrow holes in the ice or leap into polynyas (open water surrounded by ice) may be seen by others as insane, but to those who know – diving below the ice or through narrow canyons in cold water is one of the greatest thrills a diver can ever experience.

We bring you eight of the best cold-water dive destinations:

Dive through the kelp forest as sun rays burst through the thick kelp canopy overhead. Watch seals weave through the hanging underwater roots and schools of fish huddle in close formation as they negotiate their way around this cooling hideout.

Home to some of the most unique diving in the world; including shipwrecks, giant octopods, winding canyons, grand walls and sea lions – British Columbia is a cold-water diver’s divine mecca.

Hosting an array of cold-water dive sites, New Zealand’s South Island is revered as having some of the best diving in the world. Milford Sound is often talked about as the Island’s “headline site” to experience; the surrounding mountains block the sun, and large amounts of rainfall drain into the fiord, creating a permanent layer of freshwater above the clear but dark seawater. As a result species like black coral, which is typically found at depths of over 100 metres, have migrated to shallower waters.

To dive below thick sheets of ice that only industrial diggers can successfully drill through is a particularly isolating, yet thrilling experience. Those that dare take on Antarctica’s icy waters and constantly changing icescapes will witness a variety of marine life, from the small critters to the larger mammals.

In the chilled waters full of coastal wrecks, expect to catch a glimpse of ghost sharks eerily hanging on the horizon of your visibility, or large king crabs guarding coral kingdoms. Travel in January to catch orcas hunting down the annual herring migration.

Glide down the famous canyon that splits two grand continents. The fissure in Iceland’s Thinguellir National Park is where the continental plates of Europe and America face off. Forming a beautifully fractured half-pipe that boasts incredible visibility up to 100 metres.

The vibrant underwater world of Alaska boasts a variety of species both large and small. The fearsome “white shark of the north”, the salmon shark – known for its speed, agility and cunning ambush tactics on migratory prey – are frequently spotted on dives.

The ghost of Britain’s onetime chief naval base lingers at the natural harbour of Scapa Flow. A wreck diver’s dream, the cold, accessible war graves from World War II are a “chilling” reminder of how the ocean holds on to the memories of our past.

Ocean Defender of the Week: Cat Cassidy
Read Next 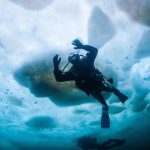