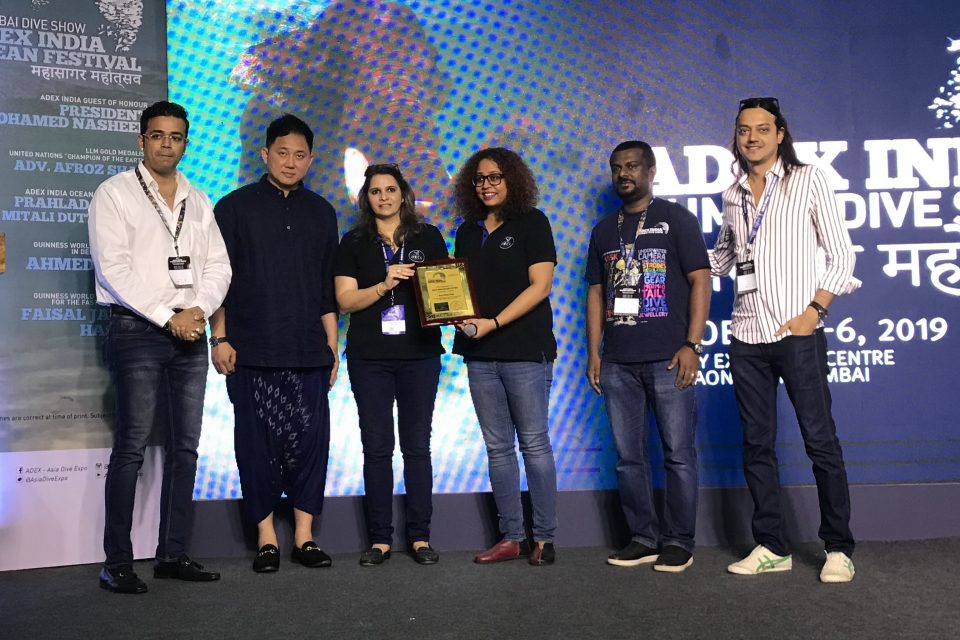 Day 3 of the first ADEX show in India organised by Underwater 360 (International), Highrise (Sri Lanka and Maldives), and Events Solution (India) happened on October 6, 2019 at Bombay Exhibition Centre in Goregaon, Mumbai. Underwater360 is proud to be co-organiser of this inaugural event. 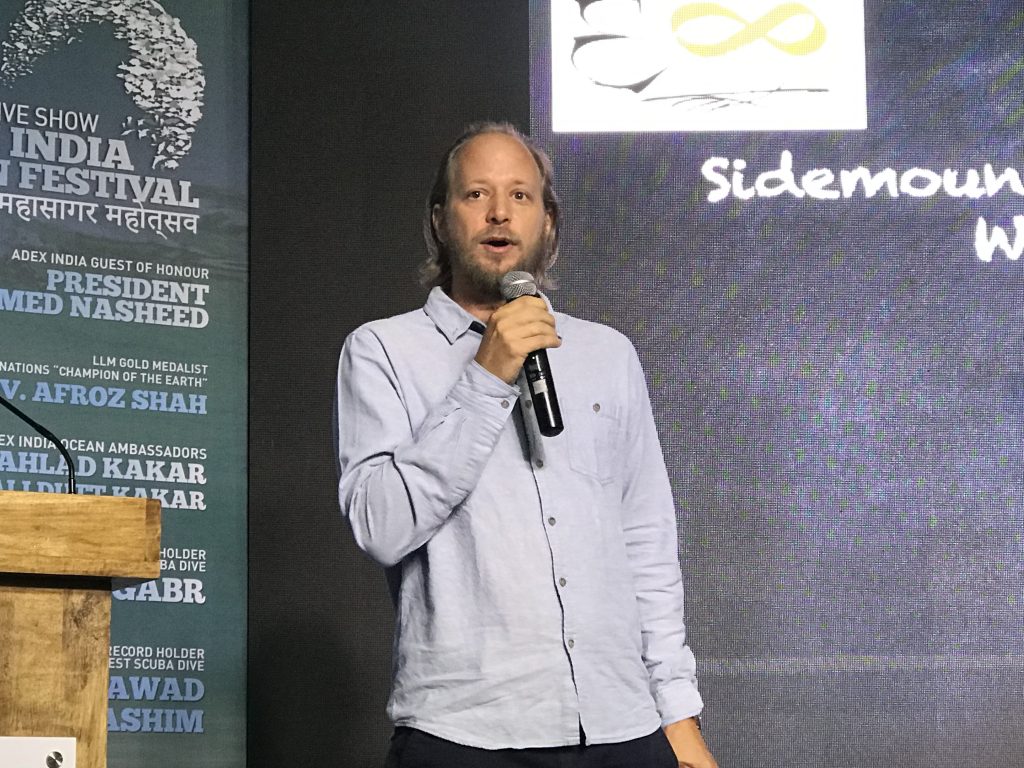 Jonah Skoles opened the last day of ADEX Mumbai Dive Show with a talk on the evolution of diving, especially regarding sidemount techniques. Sidemount diving stemmed from cave diving, wanted to go deeper. Therefore, there was a need for something on the side to explore the tight spaces. In 2000, it started to become a popular configuration.

Jonah then proceeded to shed some light on the question: “Why should one venture and try out sidemount techniques?” 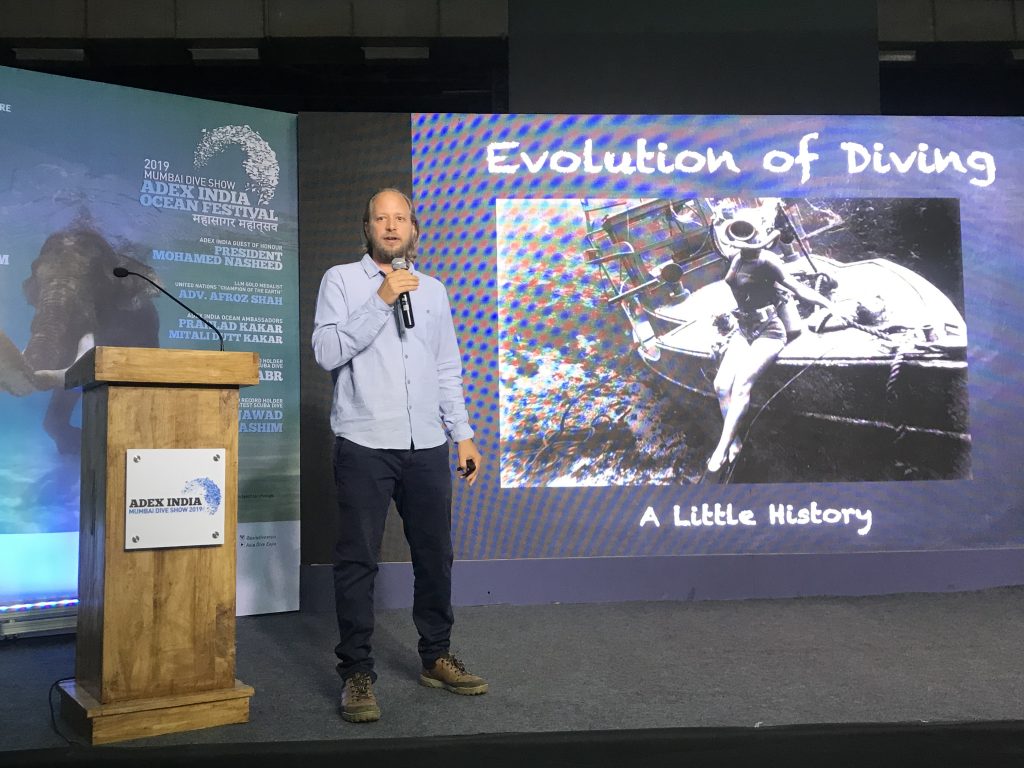 While sidemount is not new per se, it’s a reinvention of what was before. Sidemount gives redundancy (extras), is easy to transport and streamlined, and allows one to explore deeper and dive in remote areas. Plus, the gear is more accessible and feels balanced. “You can just be…” he says, “No extra hassle!”

“It is an entirely new way of diving,” Jonah exclaims, “A way that feels like freedom.”

As your time underwater is determined by the amount of gas in your tank, a sidemount allows a diver to stay underwater longer thanks to its double quantity, allowing for longer and deeper exploration. Jonah started diving sidemount to do a one-hour wall dive in Pondicherry at 30m.

While the sidemount technique requires training as its technicality calls for guidance in its use, Jonah says, “There is no one way or the highway. And that’s the beauty of sidemount.” 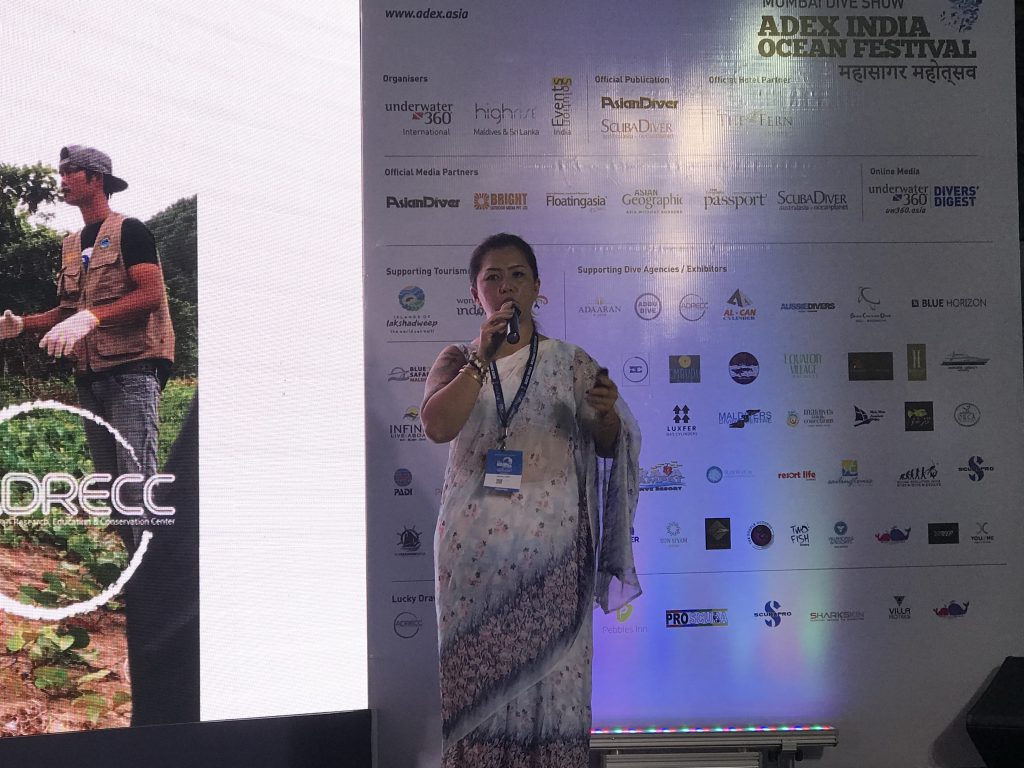 Monica Chin, donned in a beautiful sari, spoke about her personal, and her company, ADRECC’s, hope for our ocean. With ADRECC, Monica and her team taught people about up-cycling fishnets, saving sharks and coral, and created a wider awareness about a clean ocean.

“Education is important as fishermen sometimes don’t even know that corals are animals!”

Monica and her team have bought sharks from fishing boats, then took care of them for a few months and released them into the ocean again, in hopes of making them not only live, but also thrive. She says, “There is a lot to do… but just don’t give up, keep trying!” She said in optimism. 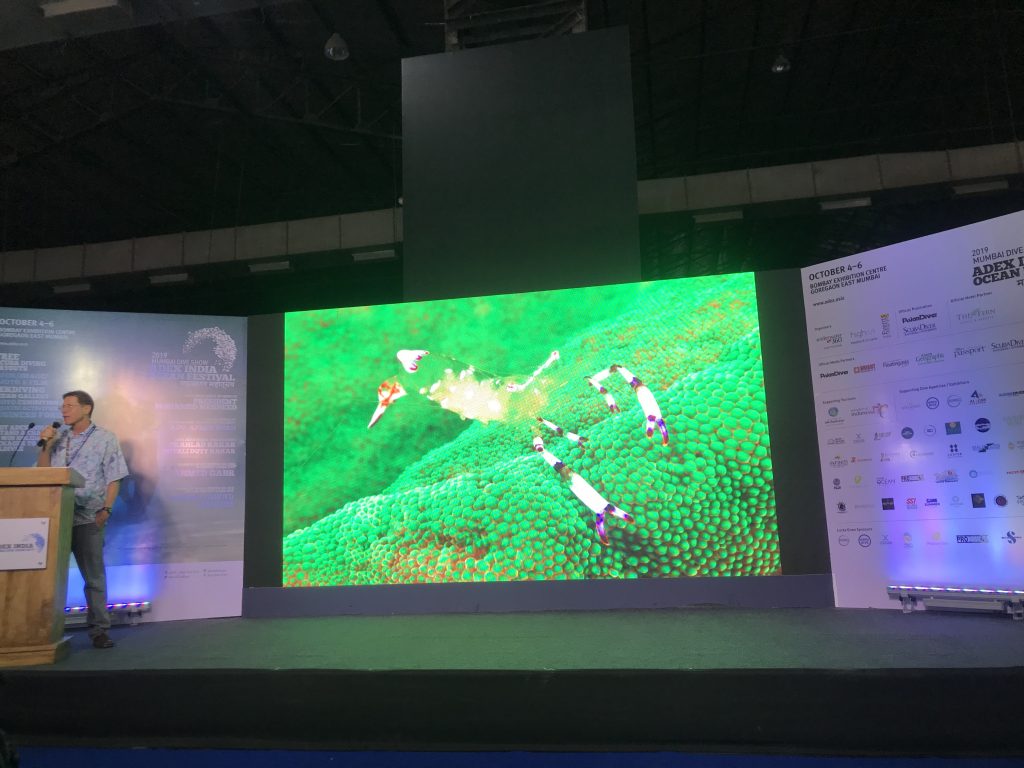 Mark Strickland spoke about the amazing marine life behaviours by looking at the tiniest to the largest creatures in the sea. From clownfish to sharks, Mark talked about how they mated, laid eggs, and fed. He also mentioned how different marine creatures partner to form unique relationships that enhance each other, also known as symbiosis, and others that simply cannot get along.

Mark’s comical, engaging talk was refreshing and eye-opening, and its less technical nature truly brought a vast variety of topics to ADEX India. 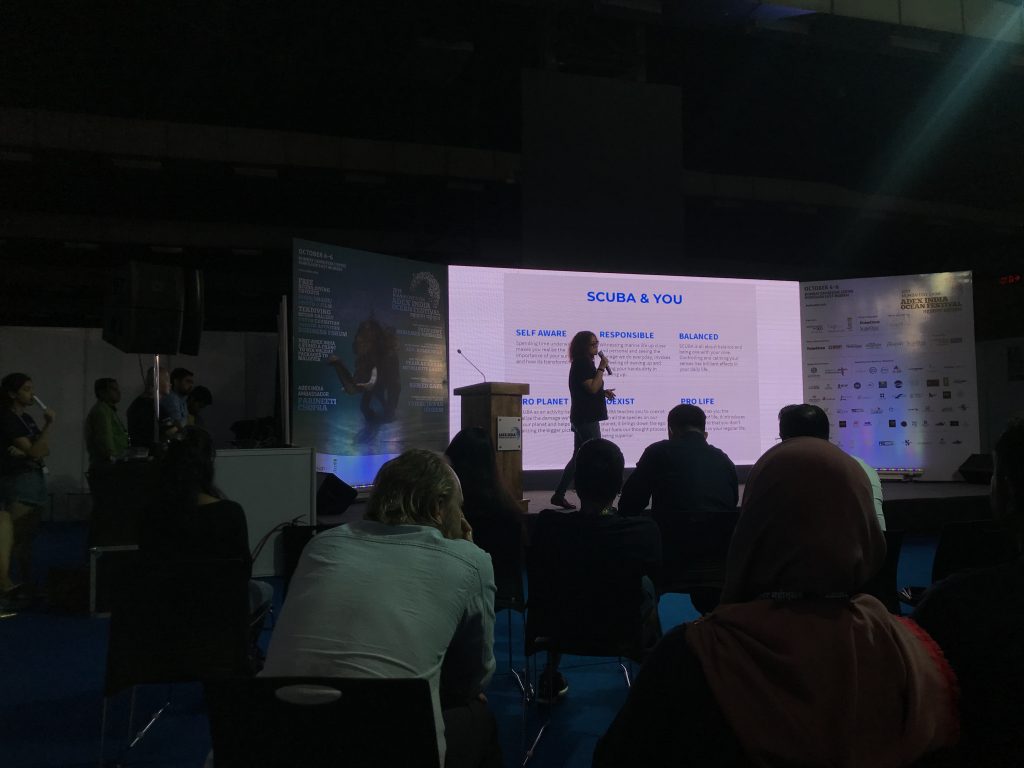 Kanika Mohan Saxena from Orca Dive talked about three kinds of divers she sees and trains as a Master Scuba Diver Trainer. These were the Facebook Divers, the people who want to try out a new sport, and those that do it because they have fears to overcome and triumph over. She talked about her approach to teaching, and how it is accessible to kids and adults alike. “ABCD,” she lulls, “Any Body Can Dive!” 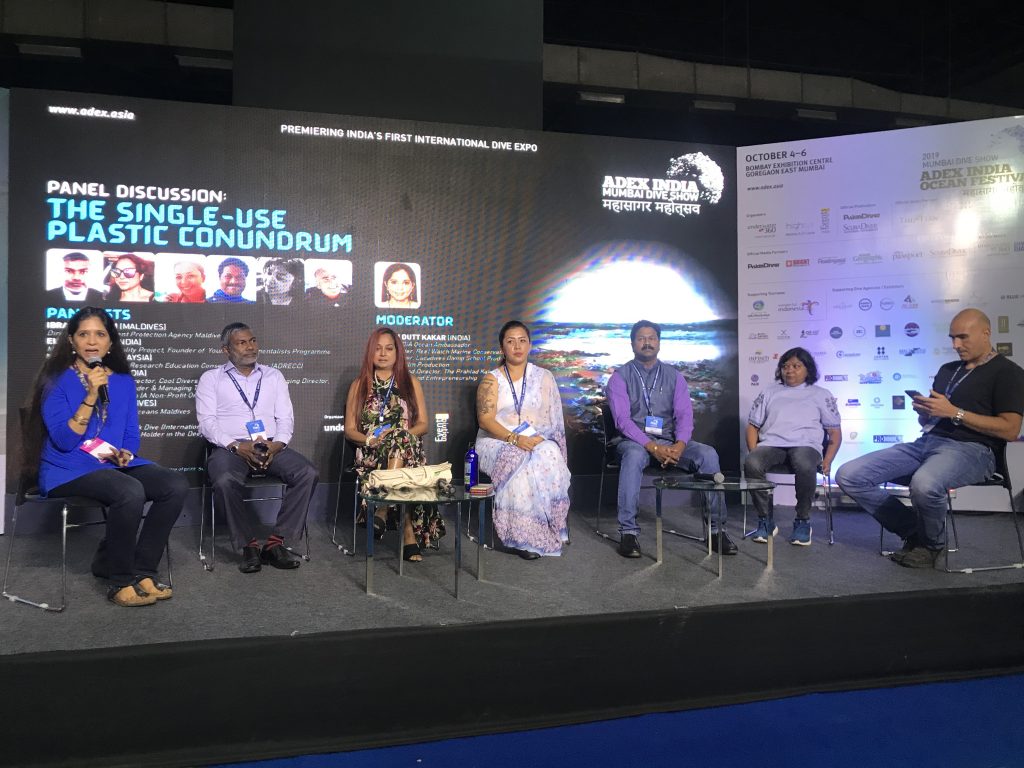 In discussion about the challenges of single-use plastic in their respective regions, Ibrahim, regarding India, said that the challenge is very big but he firmly believes that a solution can be found. “But we don’t have to wait till it’s found, we just need policies to be made.” For example, the implementation of paper straws etc is great, but the government ultimately needs to do more.

Elsie, regarding Mumbai, mentioned that the biggest challenge we face today would be a collaboration between the municipality, government, ministry, and the citizens.

“Together with ADEX, if we can collaborate with these governing bodies, we can create divers that become agents of change.”

The second biggest challenge, she believes, is the enforcement of these rules. On 2 October 2019, the plastic ban in Mumbai was placed, but has been since retracted. “This should not happen,” she said firmly.

Monica pondered, “Plastic plastic plastic… Why plastic?” She wonders why people still create plastic waste. “It’s not so hard to start with small efforts, since we as people already started this entire mess of plastic pollution. It is my responsibility as a diver and as a human.” Monica has stopped using plastic bottle for 7 years, and questions, “Why can you give excuses when the ocean and nature never gives excuses and provides for us endlessly?”

She put eloquently: “There is no need to reuse, reduce, recycle. There should only be refuse!” 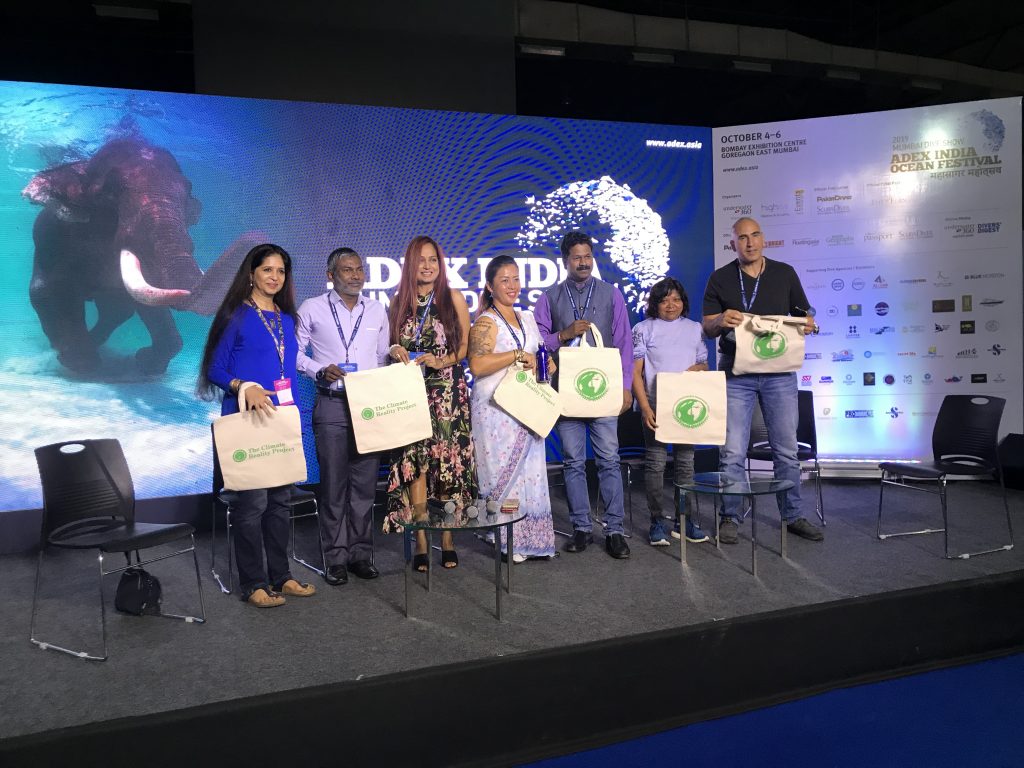 In the discussion in combatting plastic pollution, it was mentioned that while beach clean-ups are great, they should not be the idea of a solution, as ultimately, if plastic usage is not reduced, the sea brings waste back to land. ”It’s about stopping as an individual.”

Jackson told the audience to consider climate change and pollution as the biggest threats to humanity. “And plastic contributes to that,” he said. “This planet must not be known as Earth, that is only 30% of it, it should be known as Ocean.”

Shaahina believes that we have become used to and dependent on plastic. It has also become the norm and standards in businesses, imports and exports. ”But all you need to do is to reduce your footprint instead of thinking of completely avoiding plastic usage,” she explains. “Sometimes it’s necessary.”

Ahmed lamented that his children may not be able to grow in a great environment thanks to the effects of what we’ve done so far. ”We as people can voice things out but our ocean cannot. So it exhibits its problems in other ways, seen through dying corals and dirty beaches.”

“We need to set an example and standards for young generations,” said Elsie, “It needs to be in their curriculums to have ocean education and environmental sciences.” 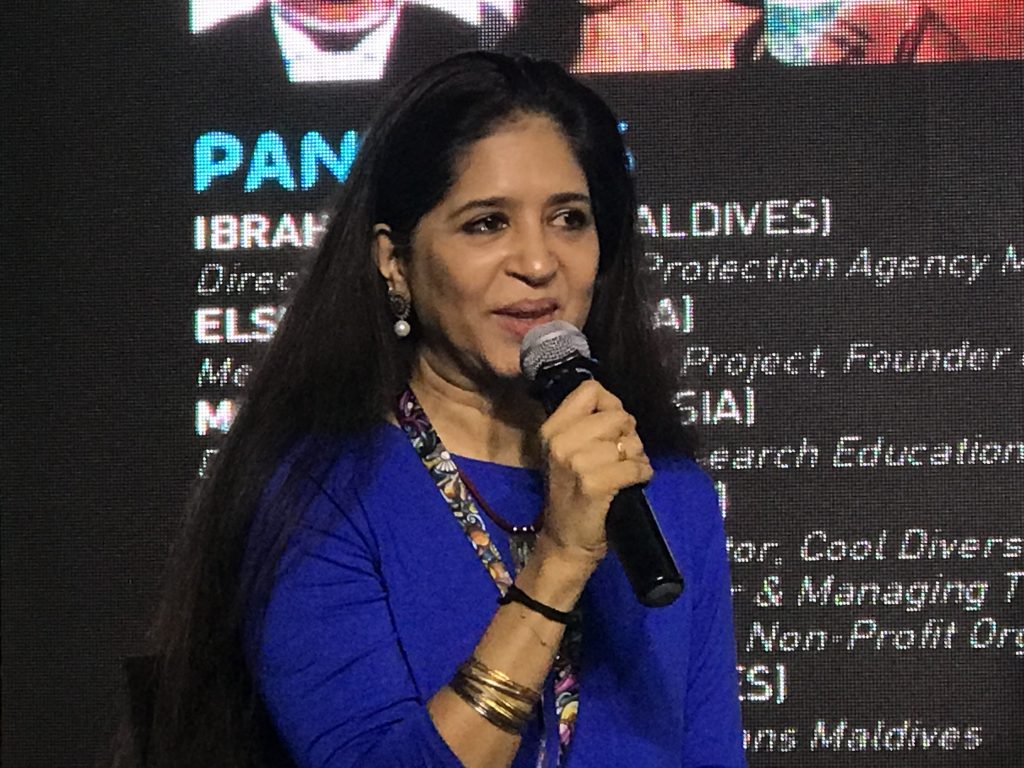 Mitali expressed that plastic is not bad per se, but it’s how people use and manage it. For example, industry standards usually require plastic packaging, and if this is gone many people may risk losing their jobs. “That’s why the government can’t pass blanket policies.”

She also talked about her favourite way of eating since she was a child, on a banana leaf, which is also one of the most eco friendly ways to subsist. “We make the change,” she believes. 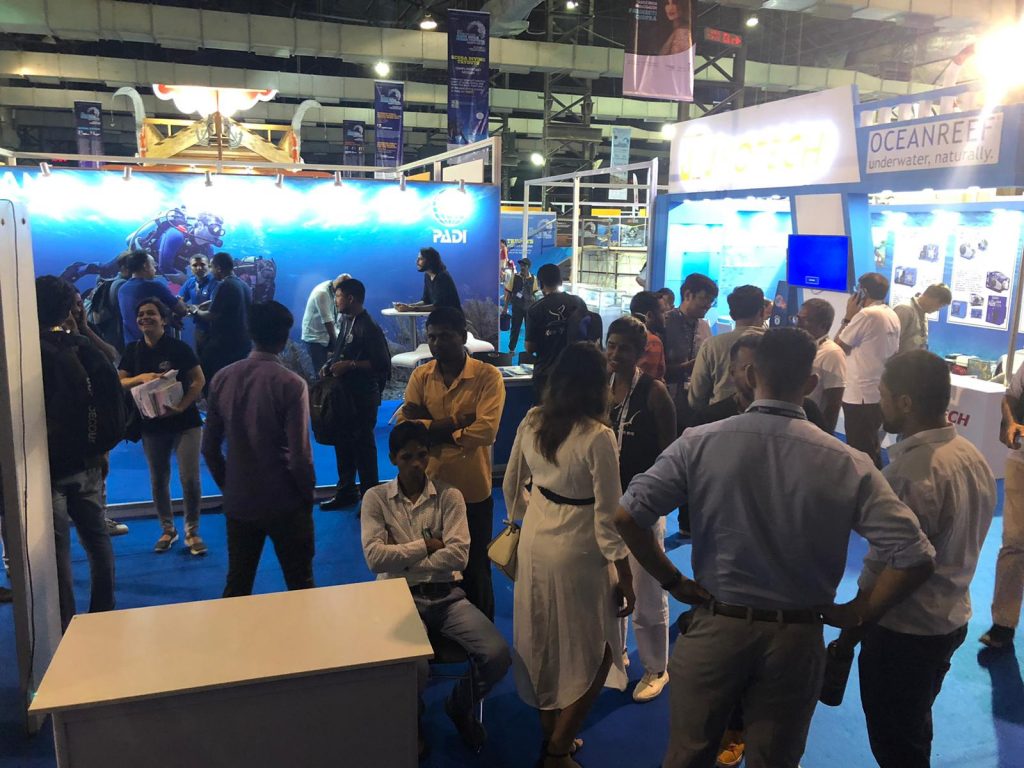 The diving industry is growing in India, and marine conservation and plastic pollution awareness around the region is an issue that is being talked about. At ADEX, these burning topics were spoken about in depth and the questions posed by the public showed that India is ready to plunge into the deep blue. We at UW360 would like to thank you for all your support at ADEX India Mumbai Dive Show 2019, and we look forward to seeing you next year! 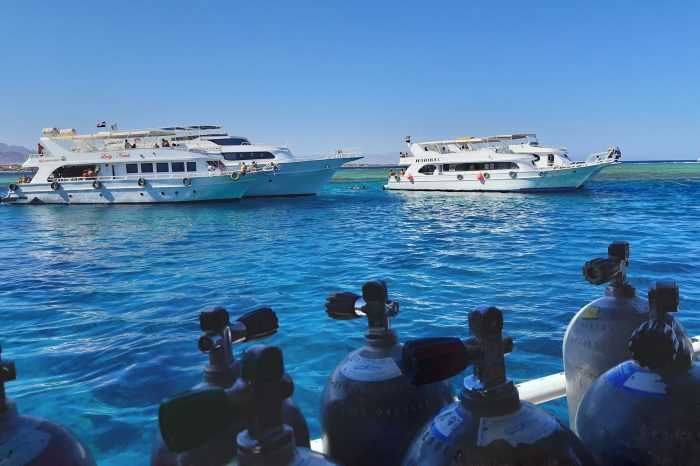 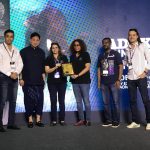