8 of the Best Places to Dive in Fiji: Part 1

Jon M. Piepkorn, Clare Caroline Brown and Stuart Gow showcase the best places to dive in Fiji. We are bringing you this extraordinary feature in two parts over the week – starting with the Pacific nation’s first four top dive sites!

Fiji has some of the best diving in the world, so naming and choosing the eight best places to dive is nothing if not a challenge. In the following two-part feature, we split up the island country by region, and by experience level: 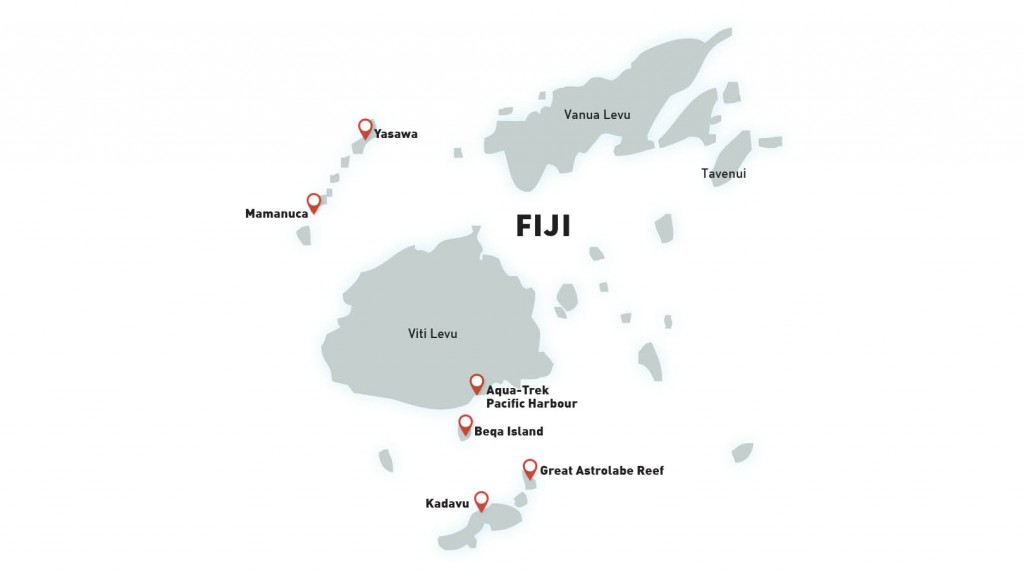 The Mamanuca and Yasawa Island Groups

Located on the west side of Fiji, the Mamanucas are a small group of 33 islands with white fringed sandy beaches and many boutique hotels with a whole range of accommodation, from backpacker to luxury six-star resorts. Surrounded by three outer reefs making up the Malolo Barrier Reef System, this area is an excellent place for beginners and to take a dive course, with warm waters year round and mostly negligible currents. Inside the lagoon there are well over 30 dive sites to suit all levels of divers. For those who are relatively inexperienced divers, there is a plethora of new aquatic life to see, with one of the premier dive sites in this region being “The Supermarket”, which is the area’s shark dive located just off the southwestern tip of Mana Island. The Mamanucas will be known to those who saw the Tom Hanks film Castaway, which was filmed on the island of Monuriki, one of the most western islands of the Mamanuca group. 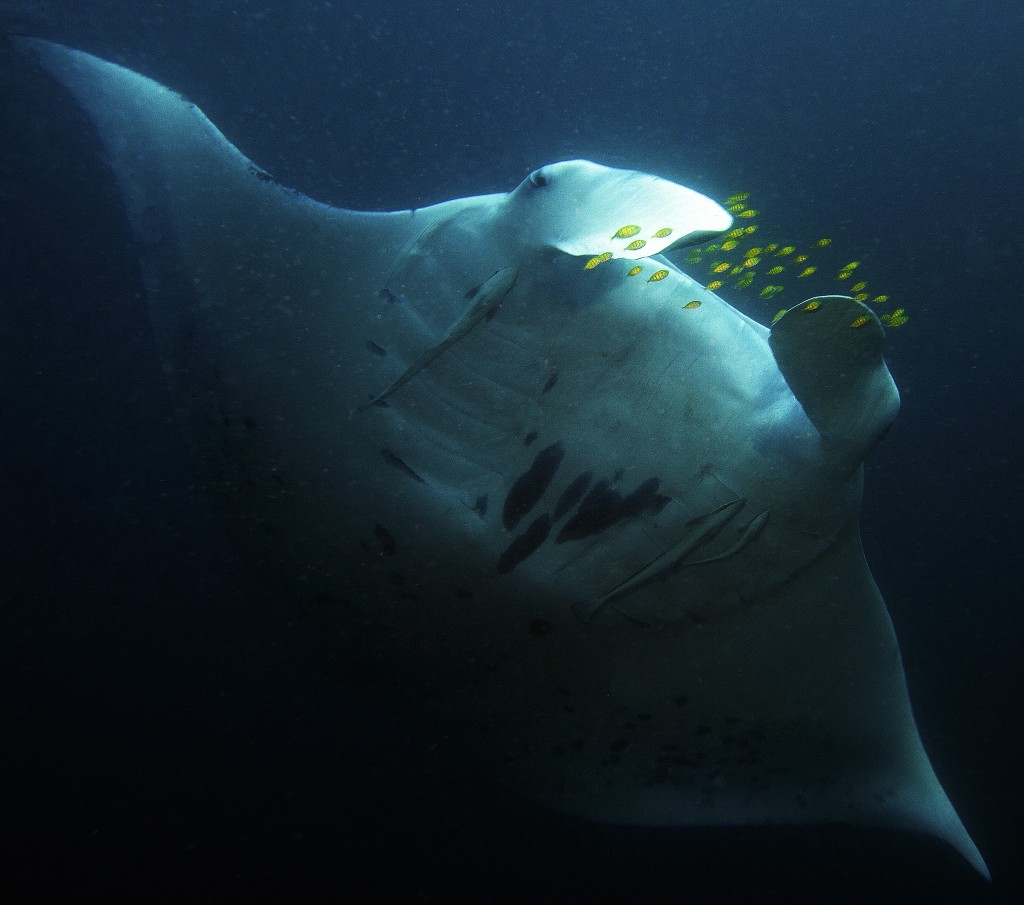 “The currents in the small channel between the islands provide a good place for manta rays to feed, and an abundance of cleaning stations.” © Heather Sutton

The “Yasawas”, as they are known to the locals, are a group of about 20 volcanic islands just north of the Mamanuca group, also on the western side of Fiji stretching in a line towards the northeast. Although not touted for world-class diving, there are some terrific dives in and around the island group. Typically more difficult to reach, and less developed than most of the other tourist areas in Fiji, they are beautiful islands, with white sand beaches, and the location where the first Blue Lagoon film featuring Brooke Shields was filmed. In and around the resort named Blue Lagoon on the island of Nacula, there is a famous shark encounter dive with schooling bull sharks. More to the south within the island group, many backpackers will find Manta Ray Resort and Barefoot Island the ideal place to learn how to dive, and to encounter manta rays who patrol in the channel between Nanuya Balavu and Drawaqa Islands. The currents in the small channel between the islands provide a good place for the manta rays to feed, and an abundance of cleaning stations. For the not-so-adventurous or the non-diver, snorkelling this channel is also quite popular.

Kadavu (The Big Small Island) and the Great Astrolabe Reef

Kadavu is Fiji’s fourth largest island, but you’d never guess it by the lack of visitors here. No roads, all transport via the ocean, 200 kilometres of barrier reef, and only a handful of small resorts make for an ideal dive destination without the crowds. You get a taste of the real Fiji out here, where the quickest transport is by boat, where the resorts are in tune with Nature, and where the authentic culture and warmth of old Fiji shines through.

Along Kadavu’s southern shore, the Great Astrolabe Reef plunges into the deep blue inky depths only a few hundred yards from the shore – this is really what diving in Kadavu is all about. The reef is about 200 kilometres long, tip to tip, running right along the south and east of the island, then curving round Ono Island and ending off another 50 kilometres north in the middle of the Kadavu Passage. 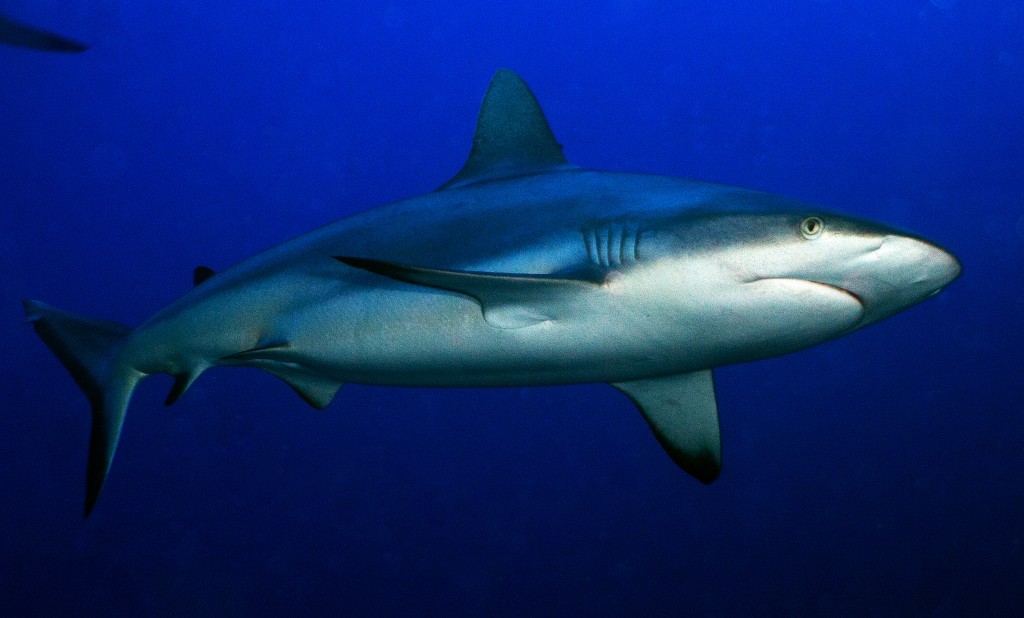 “Kadavu is renowned for epic endless walls; deep, fast-flowing passages; and miles of healthy hard corals – topped off with the megafauna of resident manta rays and sharks.” © Heather Sutton

Kadavu is renowned for epic endless walls; deep, fast-flowing passages; and miles of healthy hard corals – topped off with the megafauna of resident manta rays and sharks. The diving is extremely varied with the hard corals on the outer reef acclaimed to be amongst the best in the world – the diversity of fish is huge and face-to-face encounters with large pelagics and sharks are frequent. Kadavu’s year-round manta dive is a must!

Diving in some of the passages, and along the walls, can be a bit challenging and it’s recommended for the more-experienced divers who don’t mind a bit of current and some deeper big-blue diving. All of the dive sites on Kadavu are accessed by diving from boats to access the outer edges and passages of the reefs. 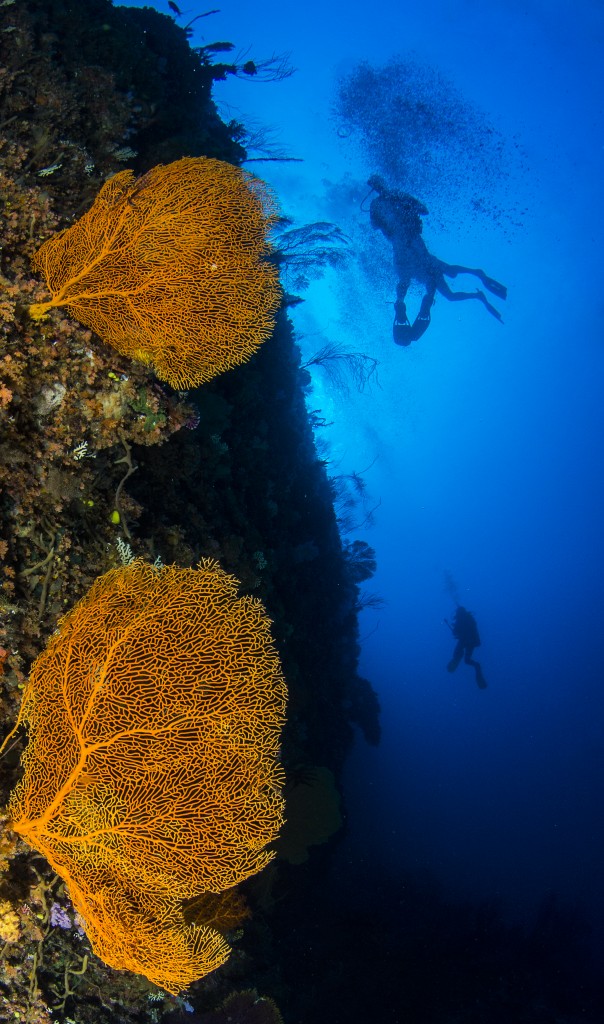 “Most sites are between 10 and 20 metres deep, but there are some fantastic wall dives on the outer edge of the lagoon that are deeper and have stronger currents.” © Heather Sutton

Formed by the world’s largest circular barrier reef, approximately 30 kilometres long, the lagoon surrounding Beqa Island offers a huge variety of sites for divers of all levels. Beqa Lagoon is located just south of the main island of Viti Levu and is accessible from resorts on the coral coast and in the Pacific Harbour, as well as those based on Beqa itself. The island is surrounded by mangrove forests, which provide a perfect home for juvenile fish and sharks, whilst the calm waters of the lagoon mean most reefs are protected from stronger currents. The lagoon is also a wonderful place to spot passing whales and dolphins playing around the boat. The reefs are home to a vast array of fish, rays and sharks, not to mention the beautiful corals. There are swim-throughs, pinnacles, coral gardens and even a few small but surprisingly colourful wrecks within the shallow waters. Most sites are between 10 and 20 metres deep, but there are some fantastic wall dives on the outer edge of the lagoon that are deeper and have stronger currents, and as such, attract larger pelagic species such as bull sharks, spotted eagle rays and giant barracuda.

Home to what is touted as the “world’s premier shark dive”, Pacific Harbour is located on the mainland of Viti Levu, where the shark dive is most readily accessed. Brandon Paige is still on site working with his Team at Aqua-Trek. Operating in Fiji since 1987, Brandon has worked and is still working closely with the Fijian Government and the traditional owners of the reefs to protect the sharks by having the reefs and the surrounding area declared a marine protected area. When he conceived of the “ultimate shark encounter dive” in 1999, he never thought it would become as popular as it is today. During one dive, a dive
r can come face to face with up to eight different species of sharks (tiger, bull, lemon, blacktip, whitetip, grey reef, leopard and tawny nurse), and nearly 300 species of fish. It is a dive not to be missed while one is visiting the Fiji Islands! 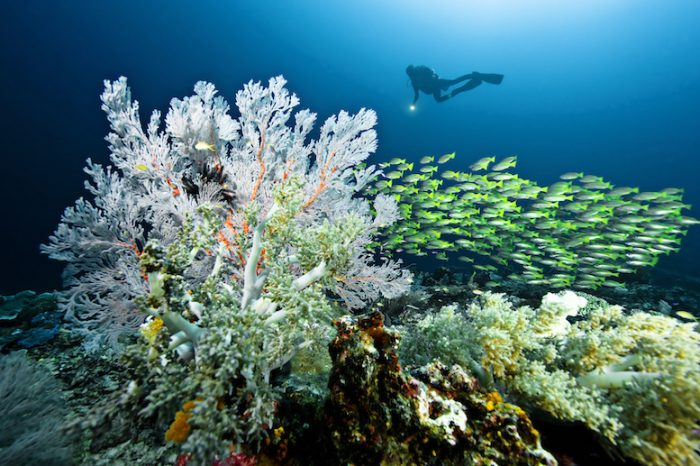 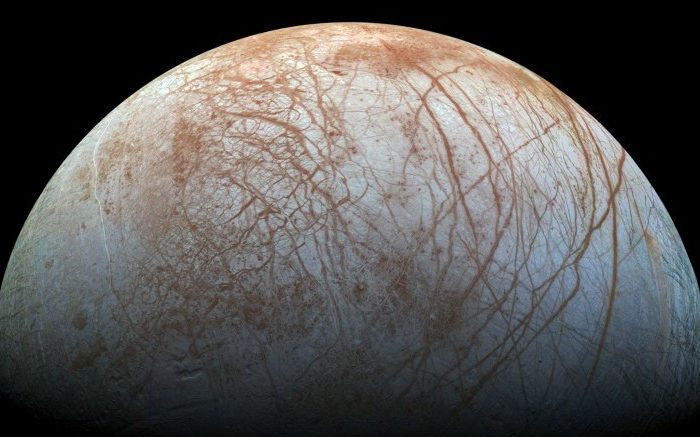 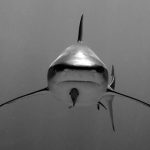 8 of the Best Places to Dive in Fiji: Part 1