Imagine looking over an endless sea of overcrowded, cluttered waste. Such is the plight of the heaps of rubbish that have been accumulated and recklessly dumped in the landfills of China. The incessant uses of plastics by China’s 1.4 billion citizens in the forms of bags, cutlery, and containers have plagued the environment. A man is seen on a bike transporting recyclable materials in Beijing, China. Plastic waste levels have increased significantly after 2010.

Today, China has stopped importing other countries’ recycling and implemented new measures such as trash sorting in an attempt to cut down on waste and reduce pollution. China’s National Development and Reform Commission and the Environment documented and announced these changes on Sunday. By the end of 2022, the Chinese government aims to completely diminish the usage of non-biodegradable plastic bags in major cities, as well as ban plastic garbage in Shanghai, Beijing and other wealthy provinces. Additionally, the food and beverage industry will be banned from using single-use straws in 2020.

The new ruling may affect multiple Chinese e-commerce business platforms like Alibaba, Taobao, 360buy and Meituan – all of which heavily rely on blankets of plastic wrapping to protect and package their goods. These online merchandisers cover everything ranging from fashion and food to home appliances. In 2015 alone, Chinese courier companies used almost 17,000 kilo-meters of adhesive tape. Companies that disregard the plastic ban may be blacklisted, implying that business will be negatively affected.

Could Dive Equipment Save The World? 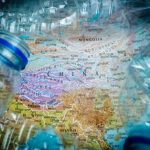