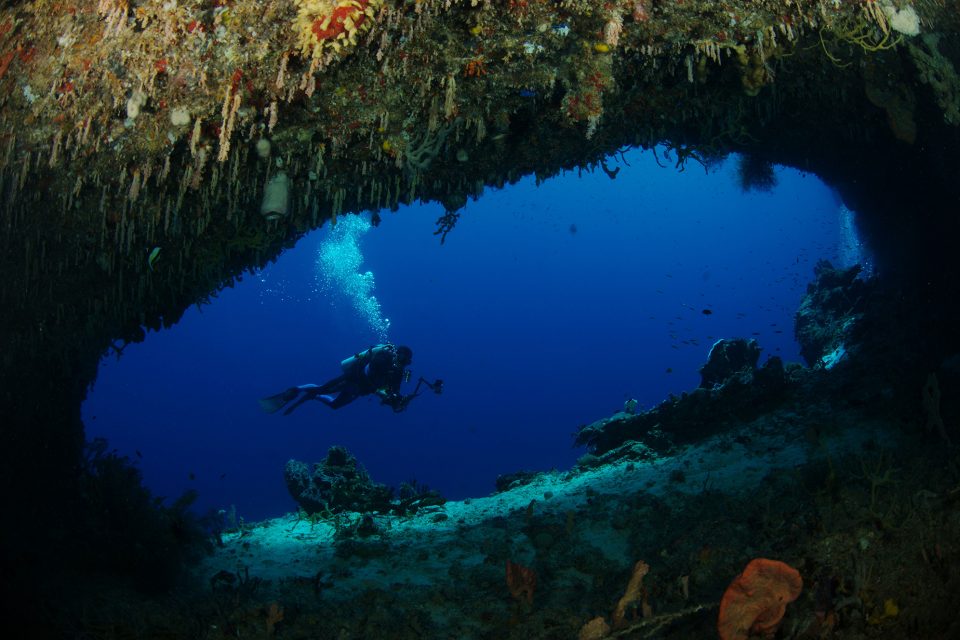 Diving the waters of Indonesia can be the ultimate experience of a diver’s life. In fact, divers are often so impressed by the visibility in Indonesia’s crystal clear turquoise waters, the vast marine life and corals that they return over and over again. They want to explore more of the dive sites that they fell in love with and try out new dive sites that were featured in dive magazines.

Not only is Indonesia the world’s largest archipelago with more than 17,000 islands but it has the good fortune to be the heart of the Coral Triangle, a roughly triangular marine area that is the global center of marine biodiversity.

This is great news for scuba divers who have the opportunity for dive experiences they will not find anywhere else. Indonesia is the most diverse marine area in the world with world class diving in waters with extraordinary visibility, and has international-class supporting dive shops that are sophisticated with high quality equipment and liveaboards. 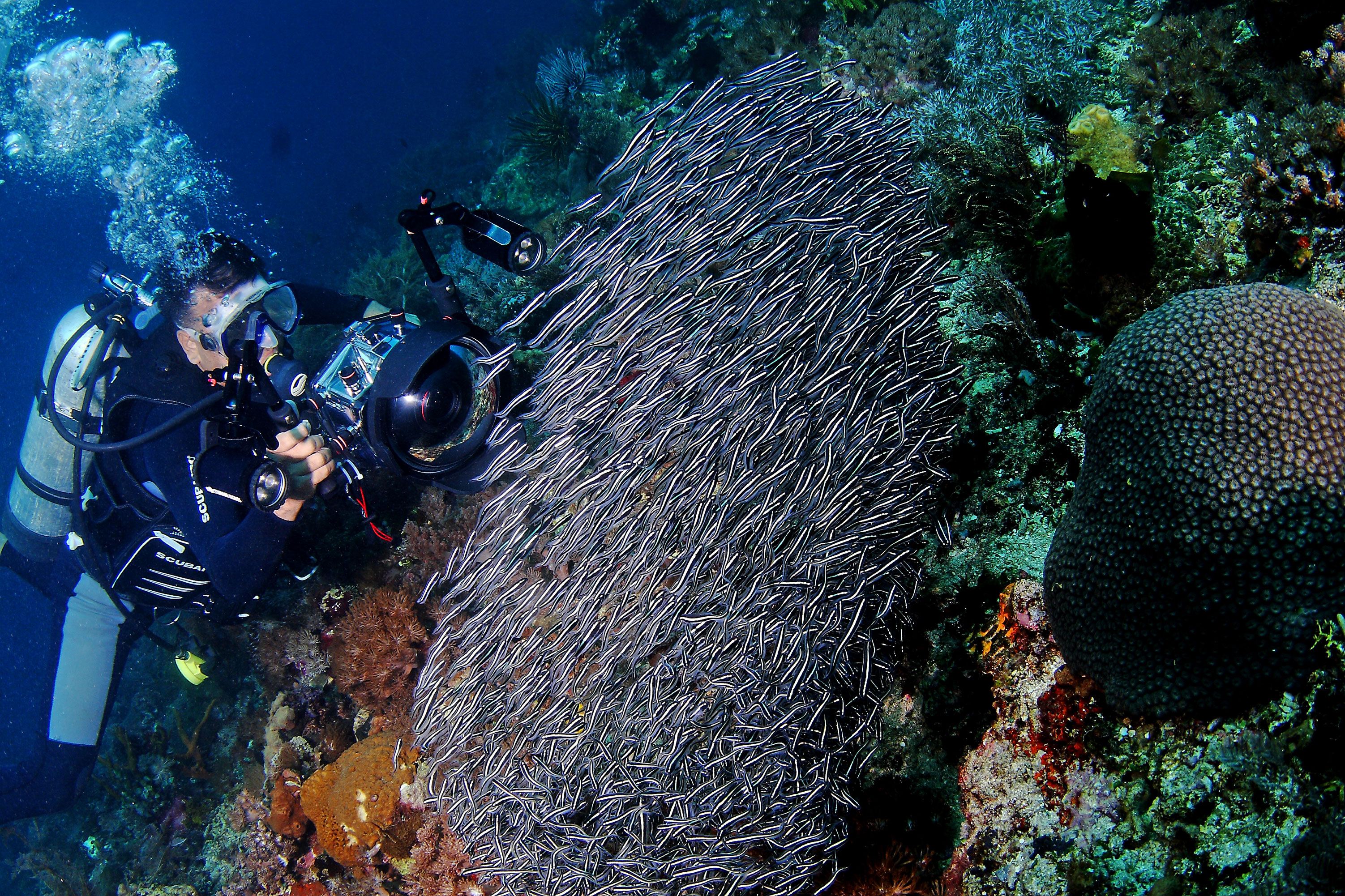 Most of Alor in eastern Indonesia has been designated as a national marine protected area. Divers come here to do muck diving and especially to spot three species of Rhinopias, better known as scorpion fish. In addition, the outstanding biodiversity and currents mean that big fish, like whitetips and grey reef sharks, are also common sights. 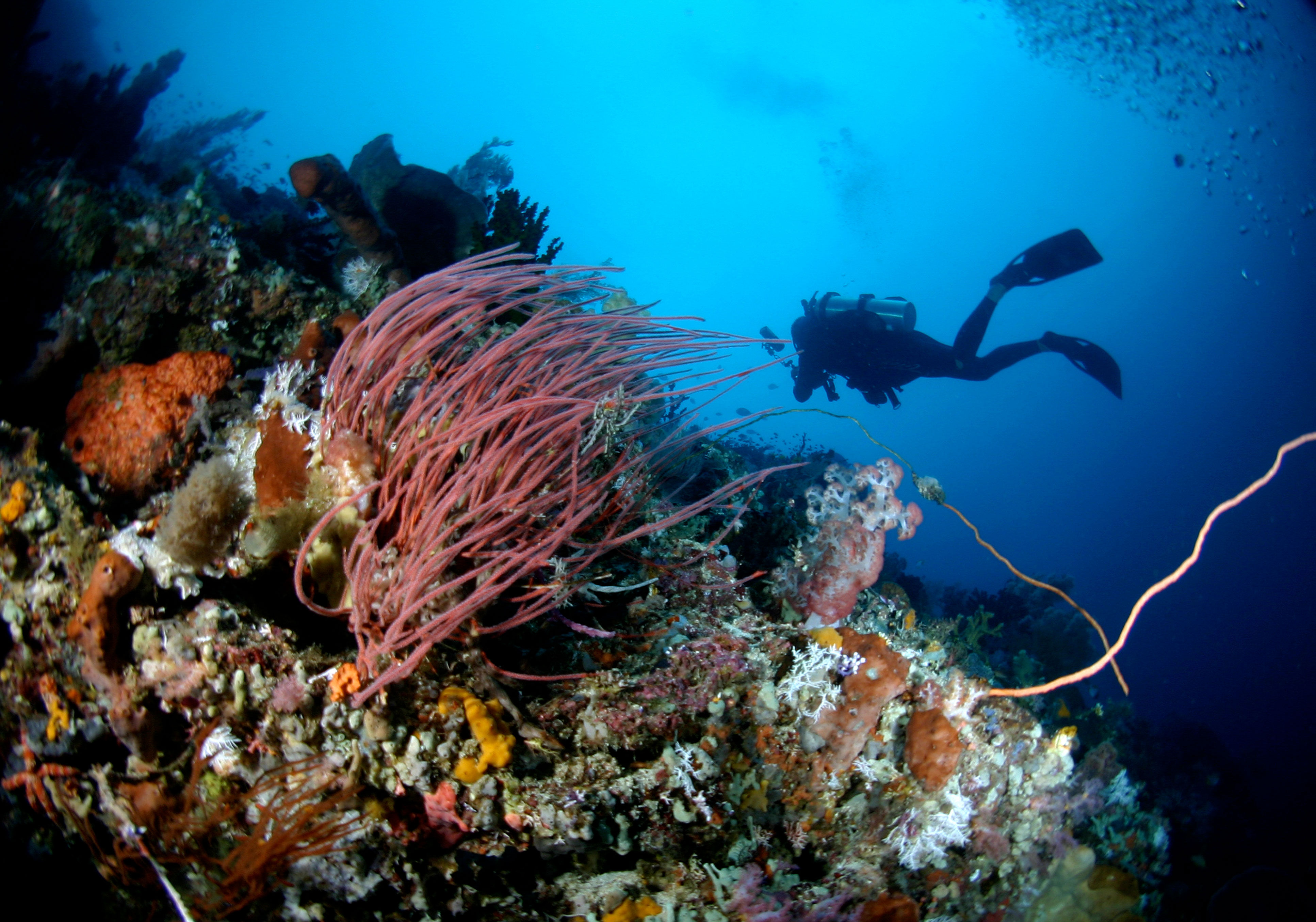 While shark populations have been badly affected in other parts of the world, Ambon and Banda Islands still have enough hammerhead sharks to satisfy even the most experienced divers. And with visibility up to 50 meters means you don’t have to get too close if you don’t want to.

Currents are not strong, so divers of all levels can enjoy steep wall diving, muck diving, and over 300 species of hard corals. 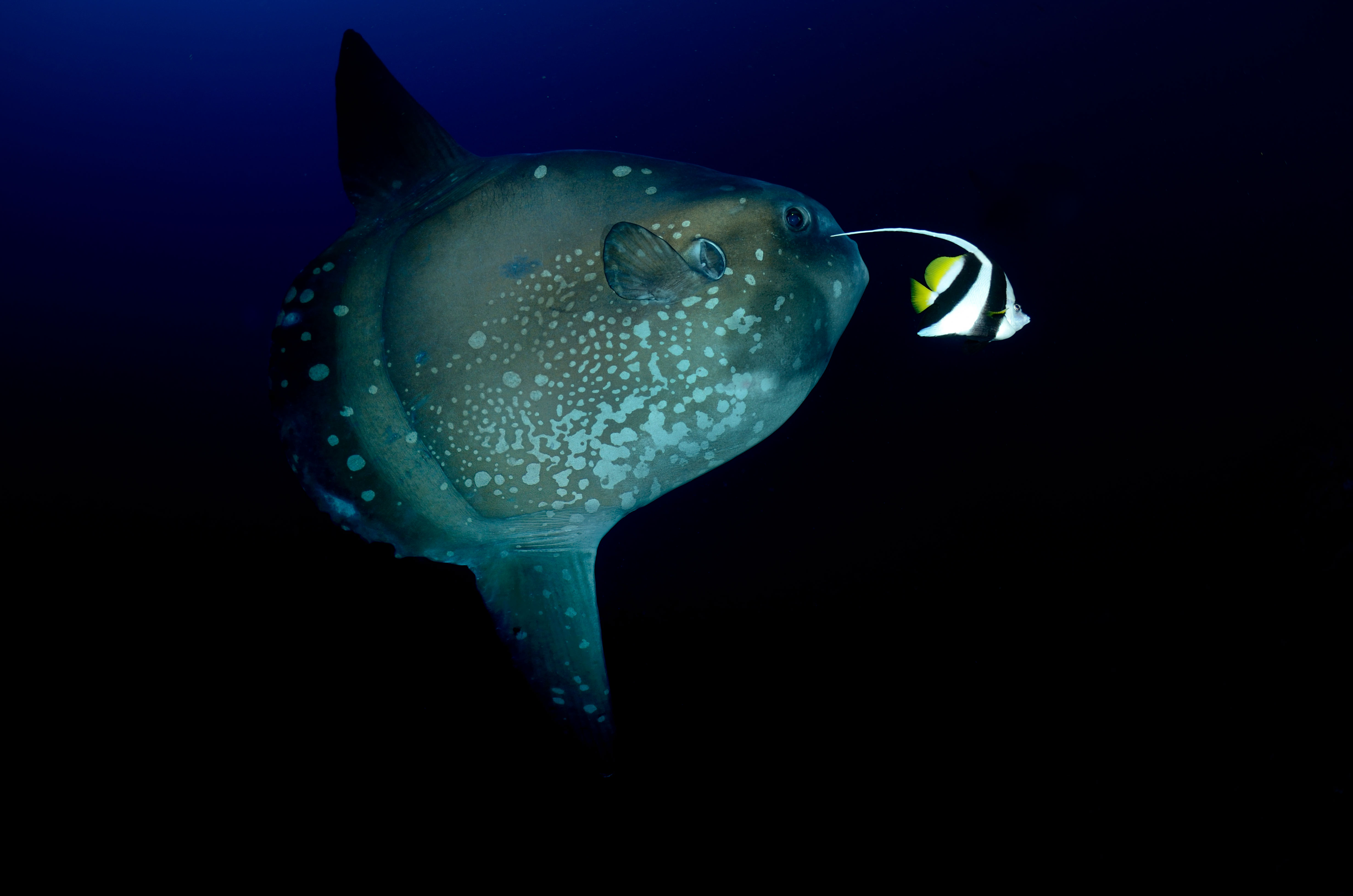 Bali’s dive sites are at the top of many divers’ bucket lists not only for the premier dive sites, but also because this world’s #1 destination (TripAdvisor 2017) offers a wonderful getaway for friends and family. Divers can bring their non-diving family and friends who can indulge in other activities – unique Balinese culture, art museums, great beaches, photogenic scenery, temples, shopping, and of course, amazing food.  Bali is also a great hub to explore the rest of Eastern Indonesia.

Divers looking for mola-mola in particular will see this sunfish catching some rays not far below the surface of the water.

Both Bunaken Island National Marine Park and Lembeh Strait, located off the coast of North Sulawesi, have long been known in the global dive community for their world class diving. 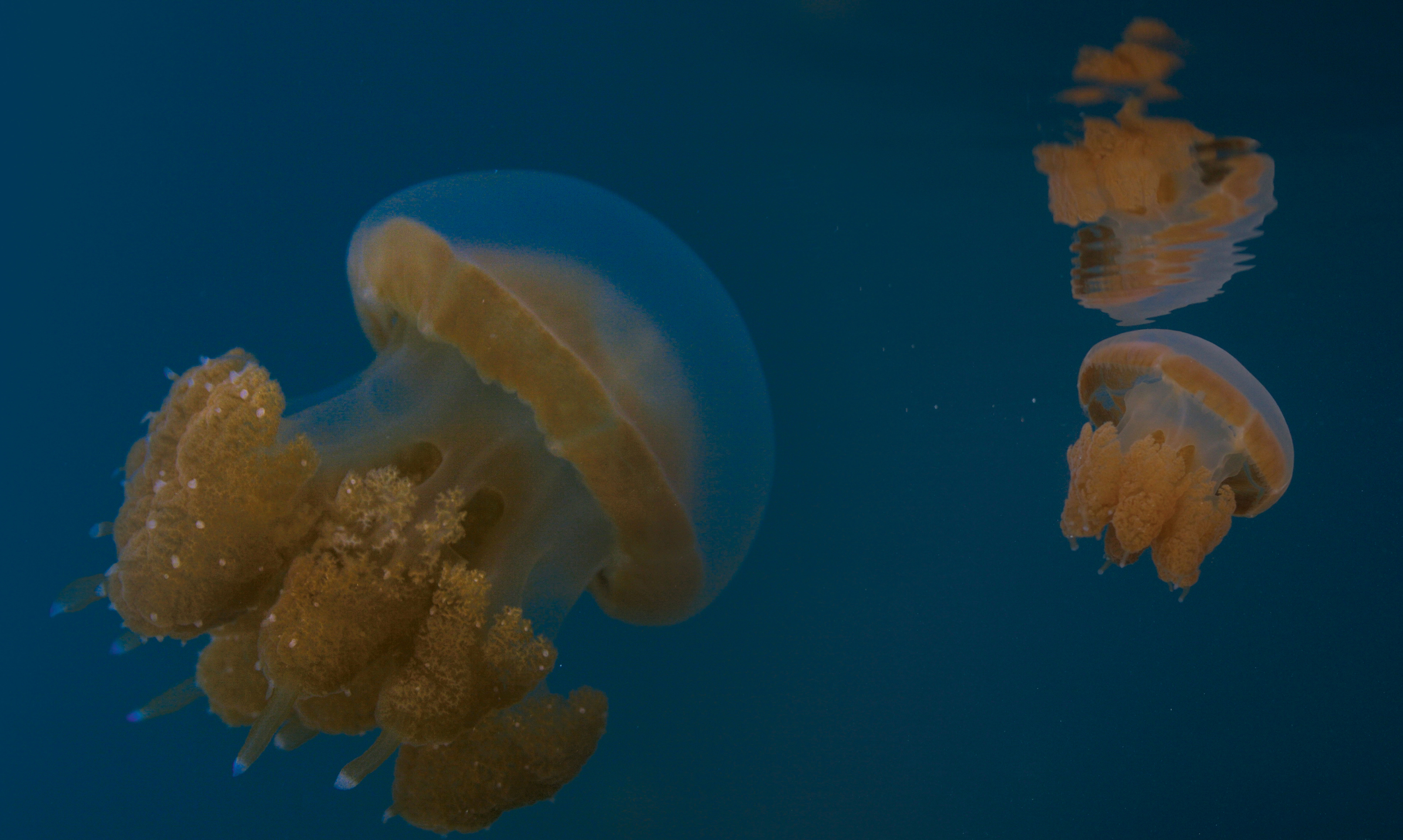 Savvy divers consider Derawan Islands to be Indonesia’s best kept secret and hope to keep it that way for a long time to come. Whale sharks are not seen in many places in the world, but these gentle giants come to Whale Shark Point in Derawan to feed on anchovies.

A special feature in Derawan is that visitors can swim with stingless jellyfish in Kakaban Lake – usually referred to as Jellyfish Lake. 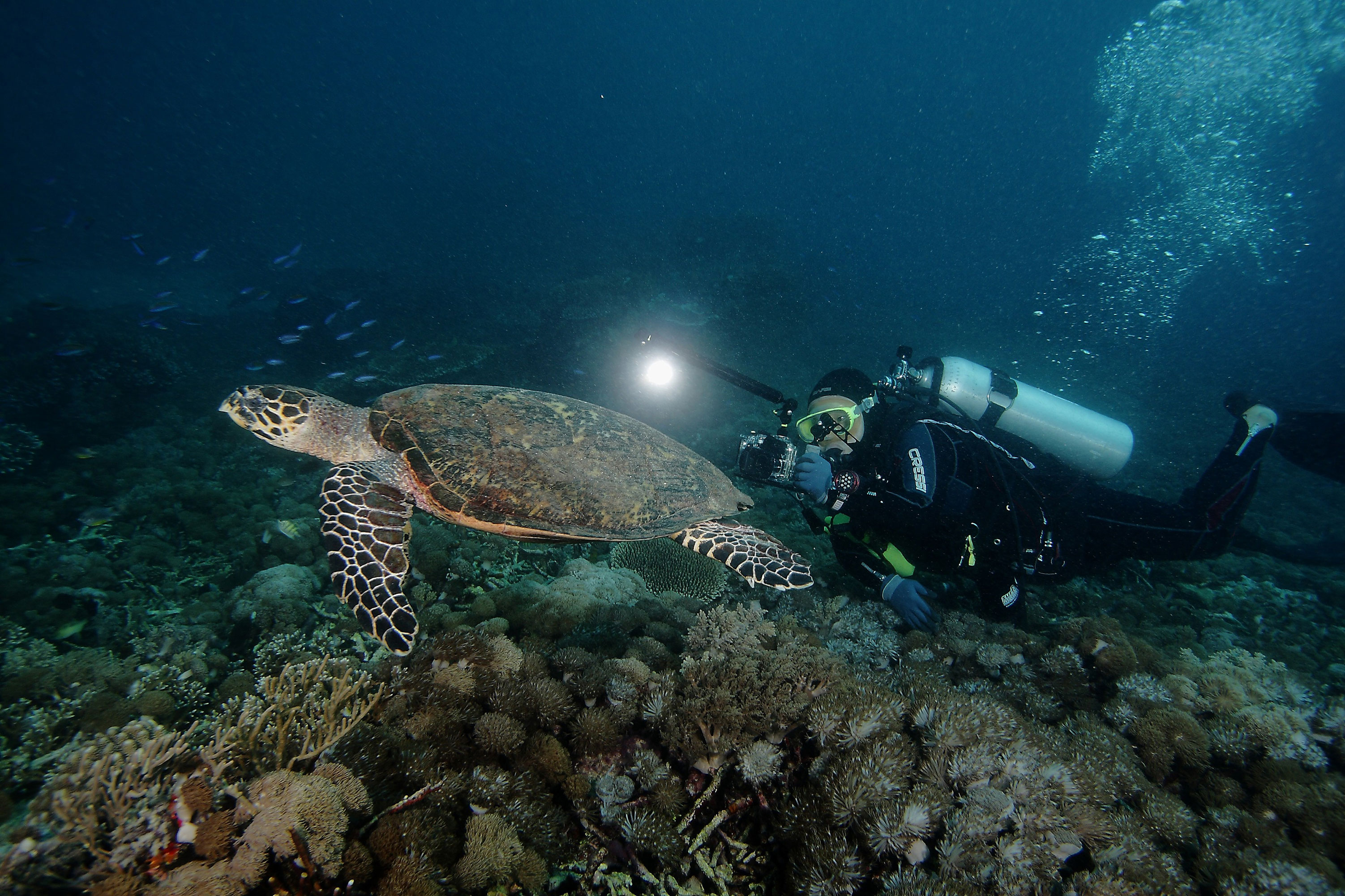 Komodo Islands not only has the world’s largest lizard (“Komodo Dragon”), for divers, Manta Alley off the southern coast of Komodo Island is the perfect place to watch graceful, peaceful manta rays perform their underwater ballet as they glide through the water. Divers are likely to see many mantas on a single dive.

The mantas are interested in divers as well. They seem to want to figure out whether these strange bubble-blowing individuals coming to visit are an unusual kind of fish.

Diving in the crystal clear waters off Lombok’s Gili Islands and spotting sea turtles is a wonderful way to spend an afternoon. The Gillis also offer easy, in-shore snorkeling for those not  yet ready to plunge into the deep. In addition, tourists can enjoy the turtle hatchery on Gili Trawangan’s beach, which is part of a government- sponsored environmental conservation program to protect and preserve sea turtles.

Raja Ampat means ‘Four Kings’, and divers certainly feel like royalty after diving in these pristine waters that have a higher species diversity than anywhere else in the Coral Triangle. The remoteness of Raja Ampat has kept it totally undisturbed and unspoilt so that divers routinely see whale sharks and smaller epaulette sharks. 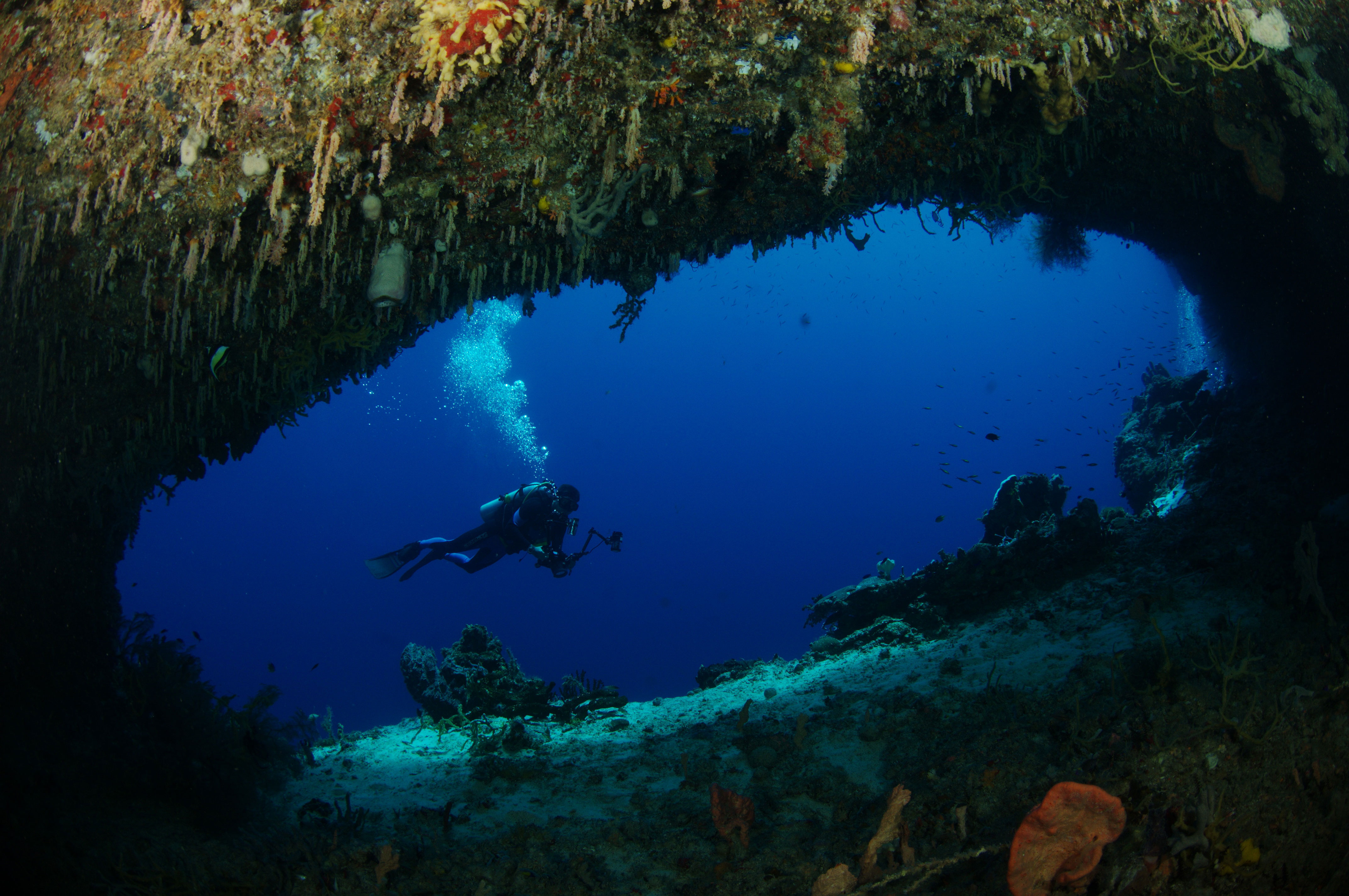 The Togean Islands in the Gulf of Tomini in Central Sulawesi form a picture-perfect group of islands with powder sand beaches and lush, jungle-covered slopes rising steeply out of the blue water. Novices and experienced divers alike will find exciting, colorful fish and brilliant coral life, as well as underwater caves that are home to species that exist only in the dark. 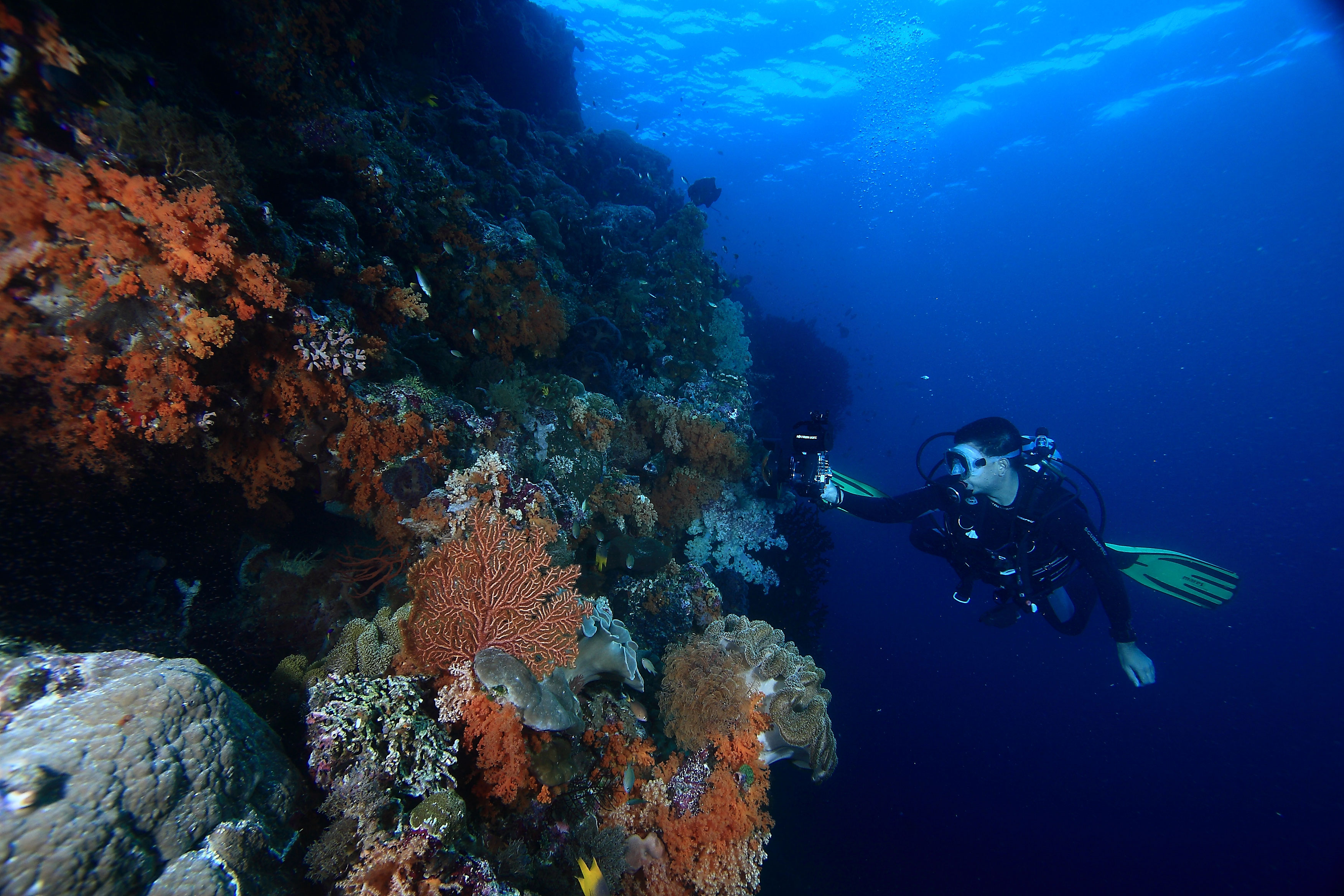 Wakatobi, a UNESCO Marine Biosphere Reserve with the greatest variety and diversity of marine life in the world, was dubbed ‘underwater nirvana’ by Jacques Cousteau. That was many years ago, but the name still applies because local communities have been diligent in protecting their coral reefs.

With more than 75% coastal area, Indonesia has the 2nd longest coastline in the world after Canada, giving Indonesia seemingly endless places for diving. But unlike Canada, Indonesia offers warm tropical waters that have magnetic appeal to both novice and experienced scuba divers.

Wonderful Indonesia, the official website for Indonesia tourism, is easy to use and a source of interesting travel information for diving and other aspects of tourism in Indonesia. 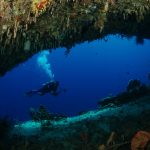