“PUR, JACKIE, PUR!” shouts Inuit Mika to his husky, named after the film star Jackie Chan. The dog knows exactly what to do: pur is a modified form of pull and the thin rope goes taut as his paws sink deep into the snow. By mid-April the sun is already warm, causing small puddles to appear. It seems hardly possible that 12 dogs can pull the sledges, laden with dog handlers, two guests and substantial equipment over the next hill, but they do. Impressively, they pull a corresponding body weight to their own, about 25 kilograms, for several hours at a time. The sledge glides almost silently through the still frozen fjord into the ice and snow covered mountains, where a few brown spots of bare earth are already visible. “The dogs are the true heroes of the Arctic,” says Sven Gust of Northern Explorers. The German, who settled north of Trondheim in Norway, has organised diving and adventure expeditions to these arctic waters for many years. “Huskies have been the most important production animals in Greenland for many centuries. In winter, using dogs was the only method of moving around, bringing the Inuit to the ice edge or outlying fjords to hunt.”

These days, the dogs are being increasingly replaced by gas-fuelled snowmobiles which require no attention during the summer, while dogs of course need to be fed and attended to through the whole year. “Most Inuit are very poor and cannot afford much. A snowmobile stands in the corner and costs no money in summer,” explains Gust. But, happily, there are still enough huskies and dog handlers that rely on this traditional mode of transport in Tasiilaq, the capital of East Greenland, with about 2,000 inhabitants. When the ice gets thin, the sledges definitely have an advantage over the heavier snowmobiles and though this is a remote region, tourists do come here and the dog sledges are a popular option for experiencing traditional Greenland. “Along with diving, we want to offer this unique experience to our guests,” says Gust. 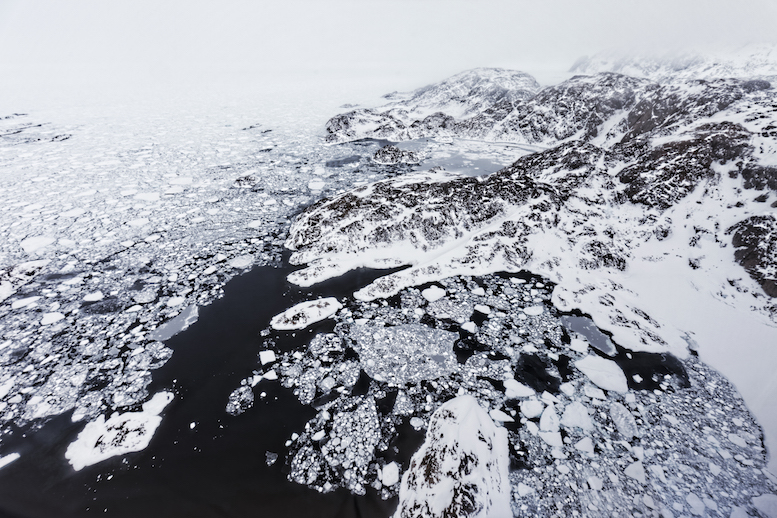 Ice sheets floating at the sea between Kulusuk and Tasiilaq in East-Greenland, Atlantic Ocean. © Tobias Friedrich

During the week-long expedition there is a three-day tour which heads into a nearby fjord. This is not for the faint-hearted as it is a five or six hour trail on the dog sledges. This is real adventure and hard to imagine when sitting at home planning it. Most of the equipment is transported by snowmobile, so the dogs don’t need to pull the heavy dive kit. When the rope tightens and the dogs set off it is a strange feeling: You don’t know what to hang onto or where to put your feet. But, as we pick up speed and silently skim over the frozen fjord, everyone starts smiling anyway. When the climb is steep, or the snow is wet, guests have to jump off the sledge and run alongside it to ease the passage for the dogs.

“Running in deep snow is more strenuous than I expected. Respect for the dogs increases when you can jump onto the sledge again,” says Thomas from Heidelberg. The amateur triathlete likes to travel to Arctic locations often. “In particular, the combination of diving and the dog sledge adventure was especially appealing to me on this expedition,” he explains. 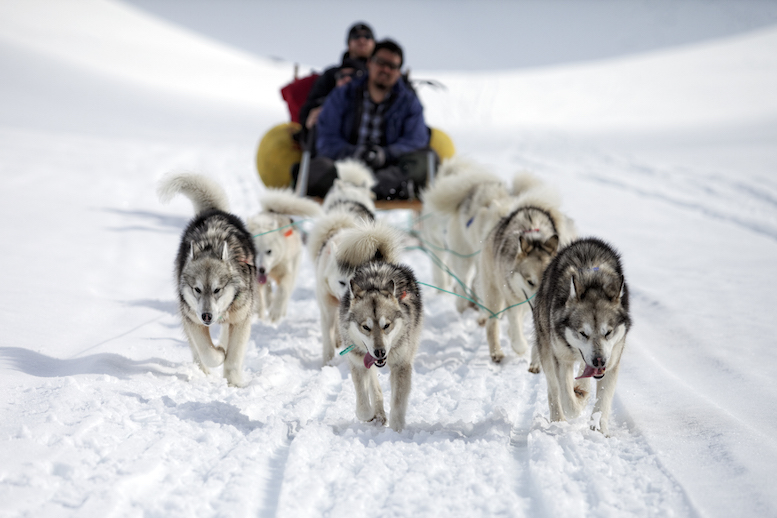 Sledge dogs towing a sledge with people sitting on the sledge in the blurred background, near Tasiilaq, East-Greenland, Atlantic Ocean, Arctic. © Tobias Friedrich 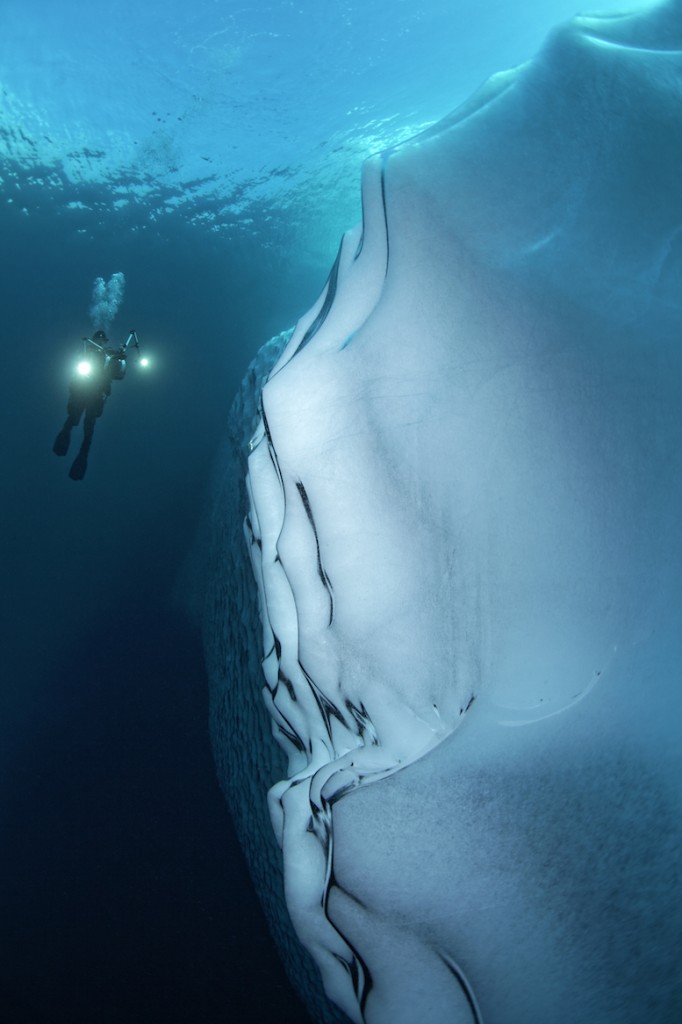 During the dog sledging tour, the accommodation is a good example of the “off the grid”, adventurous nature of this trip: a lonely cottage lying at the edge of Sermilik Fjord. There is no running water, but plenty of snow on the roof to thaw and use. The generator provides power and the stove heats the cabin up quickly – all ready, warm and cosy for the adventurers to return from the frozen lands.

The dive trips embark from this little beacon of comfort in a breathtaking landscape. The scenery is majestic and immense, with its steep mountains, gigantic fjords, and magnificent icebergs.

The special attractions underwater are the incredible icebergs. Frozen in time, these icy behemoths broke off last summer from a nearby glacier which is in turn fed by the huge Greenland ice cap. First, an appropriate entry has to be found in the water. “How and where we can go diving cannot be predicted,” says Gust, and anyone who has been in the Arctic knows exactly what he means. First, the weather can change at any time, but also the ice conditions must be closely watched at all times. If the ice is too thin, even the comparatively gentle huskies can’t drive up to the ice edge.

Gust has a solution to that: A hole is literally hacked into the thicker part of the fjord ice and that is the dive entry point. “Big cracks in the ice can quickly occur in the spring time. Divers could also enter the water using one of these cracks, but it’s important to always check out the surrounding situation so as not to move into dangerous territory,” Gust explains while closely inspecting the fjord through his binoculars.

All these concerns seem to float away once you enter the icy water. However, of course it is critically important to remember and follow the special ice-diving safety rules no matter how mesmerising the view. For example, in –2°C water avoid using the regulator at the surface, since the risk of freezing is greatest there. During the dive, it is recommended to switch every five minutes between the two main regulators, which are on independent first stages, to keep them flowing well. By following all the safety instructions of the highly experienced guide, guests will get a unique and incomparable diving experience. 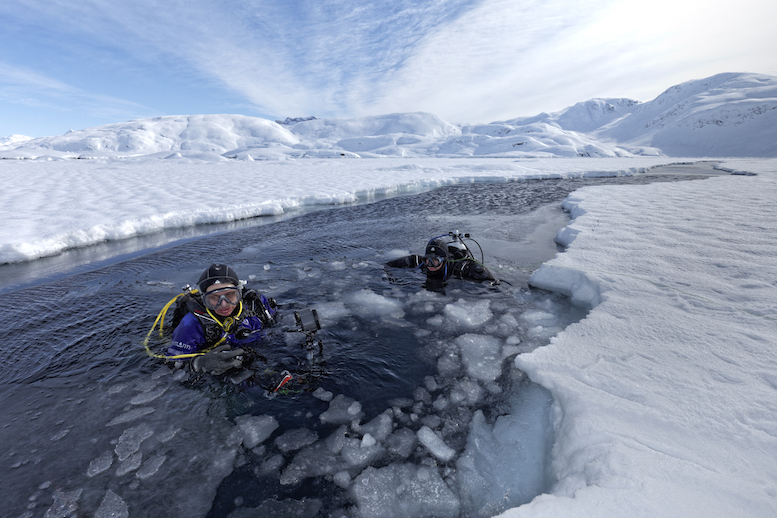 Shortly after descending under the snow covered ice, darkness quickly surrounds us. After a while, our eyes become accustomed to this completely unfamiliar environment and a new, surreal world emerges ahead. At some points, the snowpack is less dense and the area becomes sl
ightly illuminated. Small icebergs reveal unsuspected structures below the surface. Sometimes they are sharp-edged, almost crescent-shaped, then again round and smooth as a giant bowling ball. One never tires of discovering these whimsical shapes and structures, which also shine in a world of different colours. Shades range from white grey to deep blue, which occurs only in very strongly pressed ice, as is the case with the Greenland ice sheet. Everything is surrounded by a water colour ranging from dark green to deep black in the depths of the fjord. One feels transported deep into a cave inside a mountain.

Due to the low visibility owing to the increasing amount of melt water and the dark conditions, the divers can explore only small sections, secured by a line leading the way to the exit hole. The risk would be too great if the divers travelled further. “We have never had a diving accident, but safety always comes first,” stresses Gust. In the remote wilderness of Greenland, safety is extremely important, because the next pressure chamber is in Reykjavik, Iceland, two hours flight away, and that is after you vacate the fjord area to the nearest airstrip. The fjord dives require quite a bit of courage and a genuine love of adventure, but one is rewarded with unforgettable visual memories. Not many people have entered a dive in Semalik Fjord in East Greenland in their logbook. 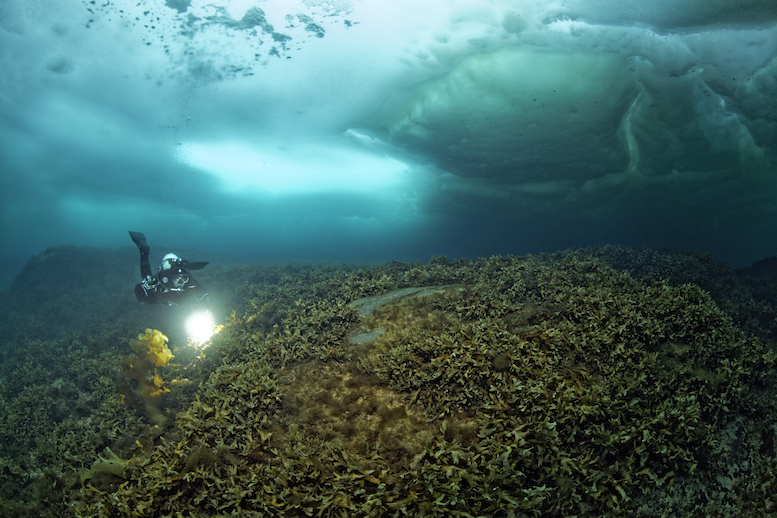 Short kelp forest under the ice, covered in snow, with a diver holder a lamp to show dimensions, near Tasiilaq, East-Greenland, Atlantic Ocean, Arctic. © Tobias Friedrich

The best is reserved for the end of the trip: the icebergs on the Atlantic coast. This also demonstrates the huge logistical effort that is needed on a Greenland expedition to reach the dive sites. From the accommodation in Tasiilaq, the equipment has to be first brought by car to the harbour, loaded onto a sledge and pulled by muscle power to the ice edge. By this point everybody wants the huskies back. Finally, everything is stowed in a small day boat and from there it goes through the icy fjord. As the boat makes its way through the ice floes with a seemingly relaxed Inuit captain, Ian from the USA exclaims, “that is amazing!” He has been filming the ride with his action camera and is now looking back from the bow, grinning at the other passengers. “I can’t wait for the dive!” he says, anticipating the next adventure. But not every iceberg that has broken off from the northern glaciers and driven southwards along the coast can be dived. “The iceberg must be as stable as possible without overhanging edges or large cracks, otherwise a piece could suddenly break off,” warns Gust. Of course, this risk can never be entirely ruled out, but thanks to the long experience of the organiser he can assess the potential danger well and unerringly chooses the correct ice giants. 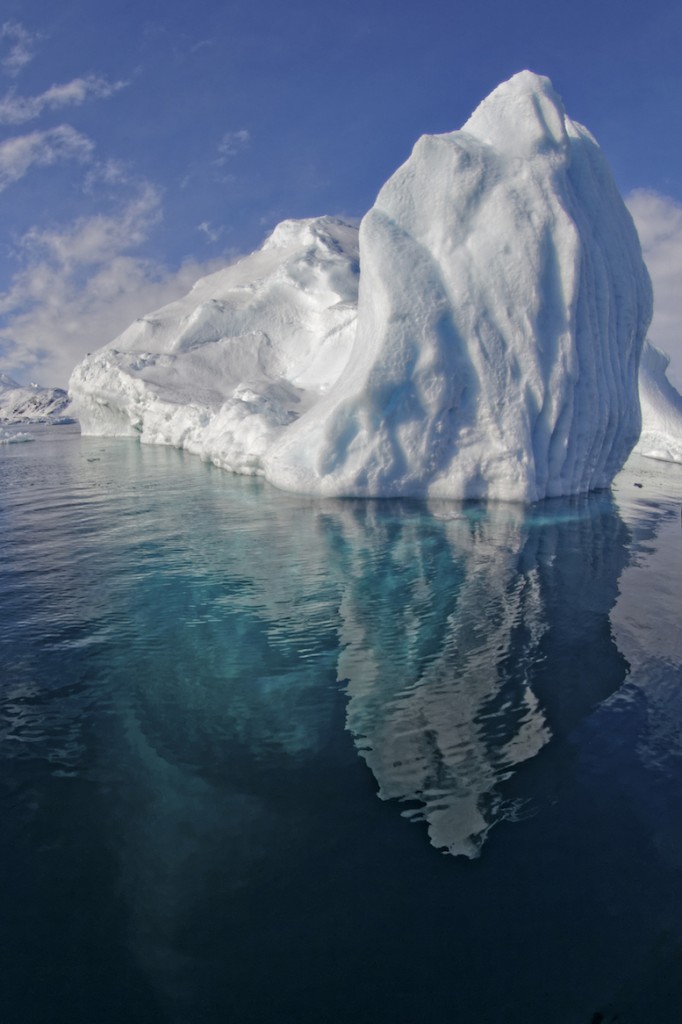 Iceberg in a fjord with a reflection on the surface and the clear visible part underwater, Tasiilaq Fjord, East-Greenland, Atlantic Ocean, Arctic. © Tobias Friedrich

In April, the underwater visibility on the coast is exceptional. At least 20 to 30 metres is not uncommon and it can be up to 60 metres. Some of the 90 percent of the iceberg, which is supposed to be underwater, can already be seen from the surface. The structures of the giant are shimmering blue-greenish in the strong sunlight. The colossus reveals unexpected forms, strangely similar to a coral reef with canyons, coves and small plateaus, which extend far beyond the structures of the part of the iceberg that can be seen over the water surface. In some places, sharp edges like oversized axes rise from the ice and in others the ice is traversed by fine cracks that run through it like veins. Almost everywhere is a thin, only centimetres thick, transparent layer of ice over a solid white core that looks like snow. In these fantastic visibility, a safety line is no longer necessary, because at any time the boat can be seen from the depths, which follows the divers between the ice floes on the surface. The extraordinary visibility results from less melt water out at the coast and the algal bloom starts a few weeks later in the year. “I visited Greenland in the summer when there was much less visibility. Now I am finally able to check off the experience in these spectacular conditions,” says Thomas from Heidelberg. “In summer, the whales are the biggest highlight and in spring the icebergs are the stars of the show,” he continues enthusiastically. Fortunately, the farewell is not so bad, because it is topped by a helicopter flight over the sea ice. “It’s only possible to reach the airport with a helicopter. For the boats the ice is still too thick at this time of the year,” explains the smiling Sven Gust, sitting in the bright red helicopter as the turbines roar to life. 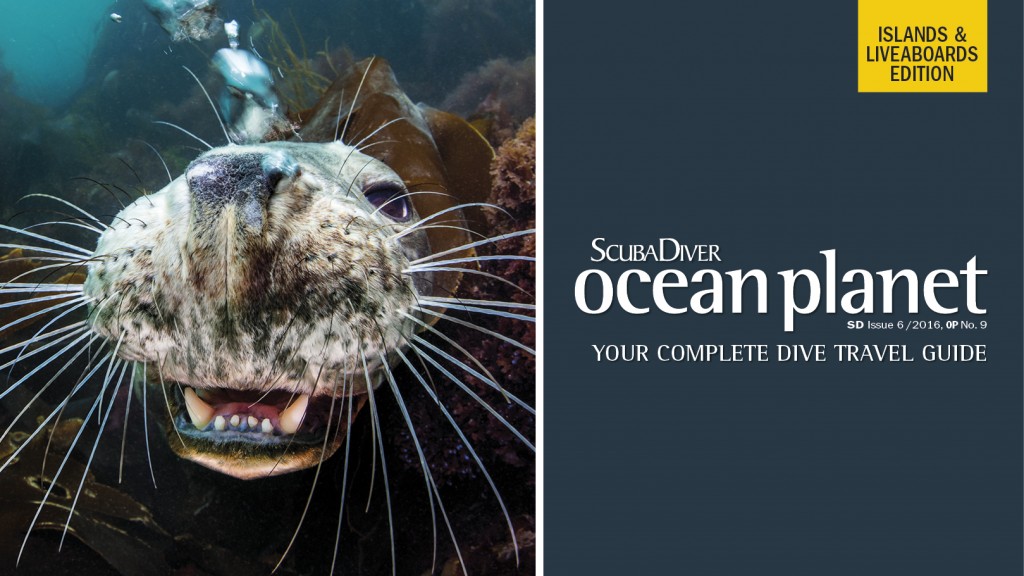 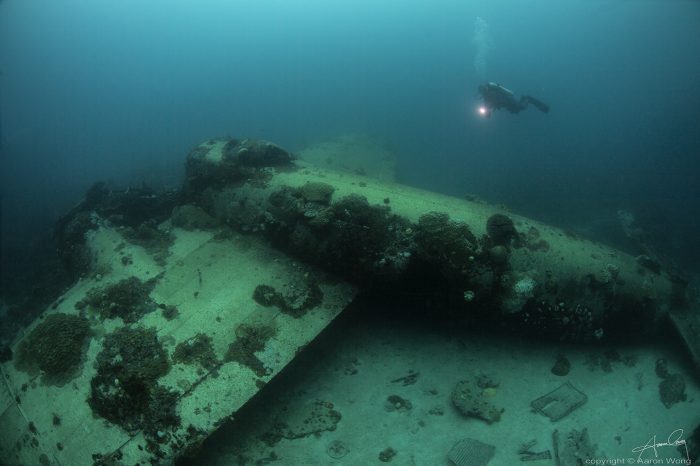 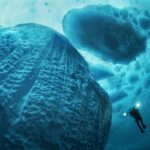