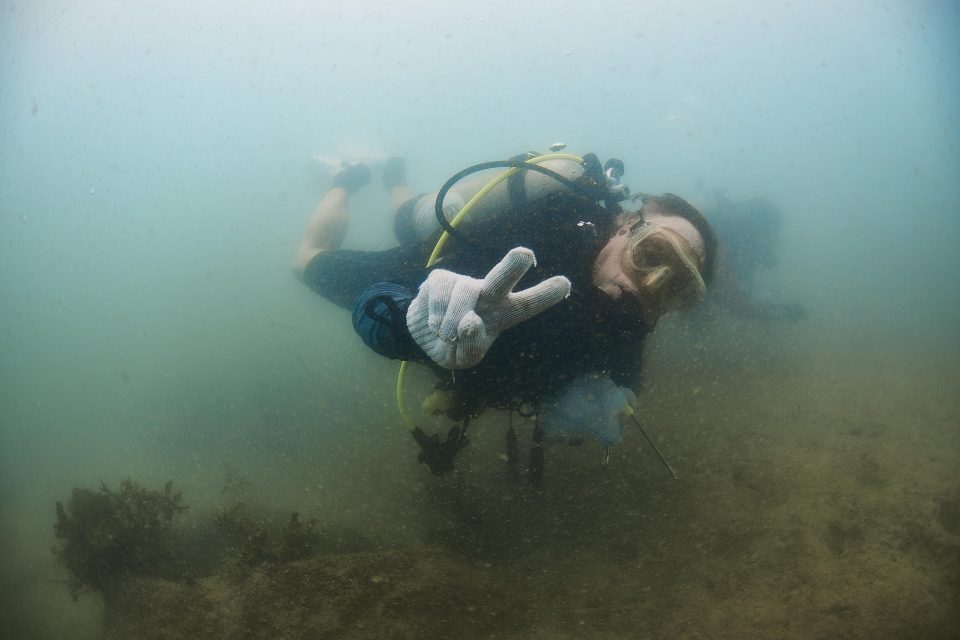 Diving trips conjure up images of the vivid blue, beautiful corals, exotic fishes, and myriad species. But something else lurks beneath, something vastly important: Pollution. By living and working in such a pristine city, the Singaporean government has maintained and controlled pollution at all costs. As such, the pollution of our local waters is not something that crosses our minds every day. One possible reason could be because we cannot visualise the problem because it’s underwater. I guess one could use the phrase, “out of sight, out of mind”, in this context. So, instead of behaving like an ostrich, when Ying Kai from The Submersibles asked whether I was keen to join them for an ocean clean-up at Lazarus Island, I was all in. 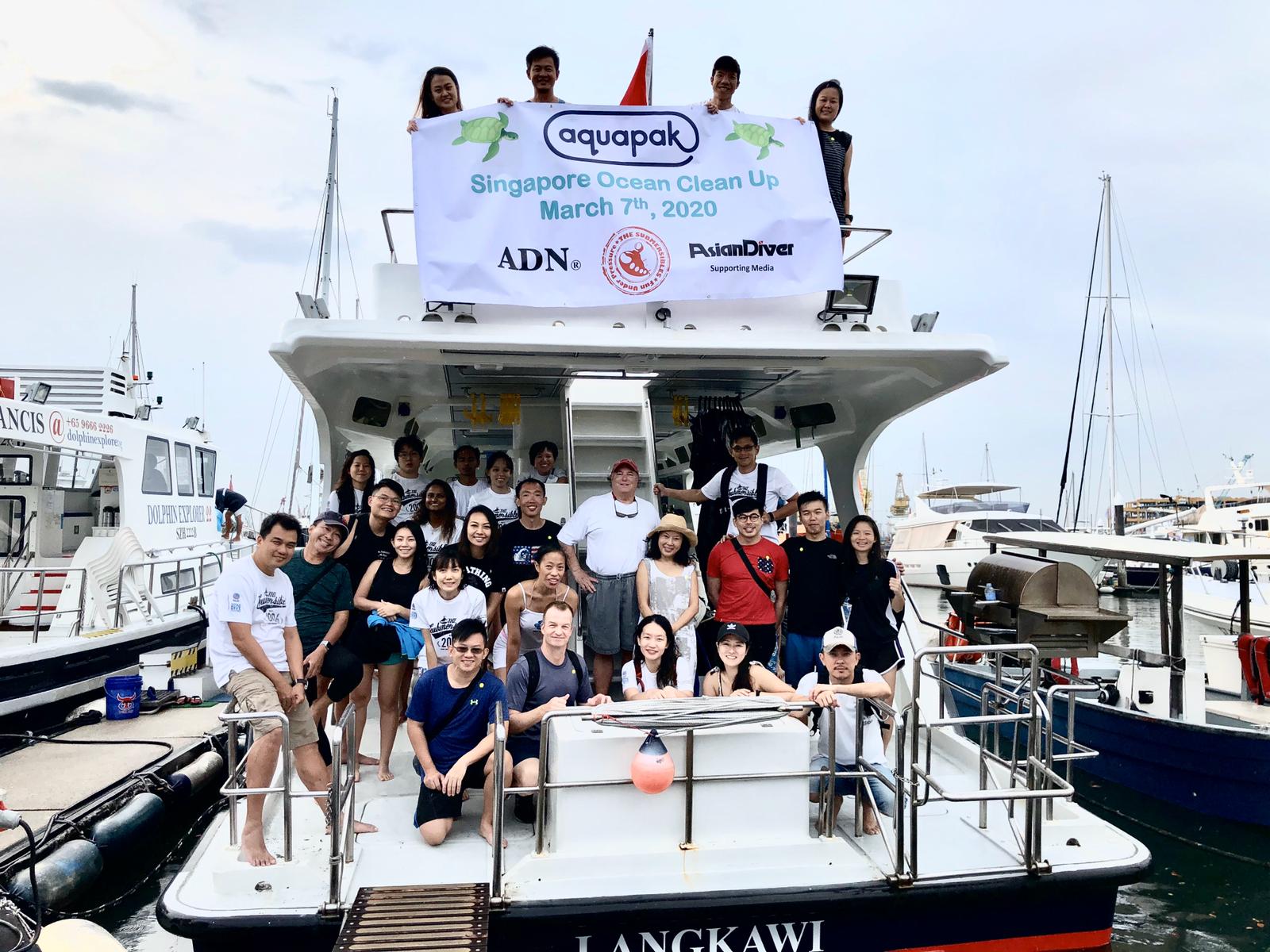 A little background about my diving experience: I am an Advanced Open Water diver and have been diving for slightly over four years. I have clocked approximately 40 dives (just a ballpark figure since I have not been diligently logging my dives up until when I stumbled upon 150Bar, a dive log mobile app that serves its purpose well by helping me document my dives. It also provides data to marine researchers to track reef health).

The majority of my dives have been at Tioman Island as I spend a little too much time at Paya Beach, but never actually in Singapore. It is no secret that when it comes to our local waters, only when the stars are aligned are you able to see your fins, enjoy some semblance of life form (think nudibranchs) and not get dragged away by the current. Being an amateur, I was a little apprehensive during the days leading up to the clean-up. On the day of the clean-up, I was still afraid, hoping that I wouldn’t be a liability and ruin the trip for others.

When I went aboard the Dolphin Explorer at the Republic of Singapore Yacht Club with 30 other dedicated individuals, including ADEX Ocean Citizen Ambassador Aaron Wong, I had the opportunity to have a chat with the sponsor of the trip, Mr. Todd Rosin, Managing Director of Asia Development Network who represents AQUAPAK, a manufacturer of non-toxic, marine-safe, water-soluble polymers that can be used to create packaging products and address the problem of single-use plastic. 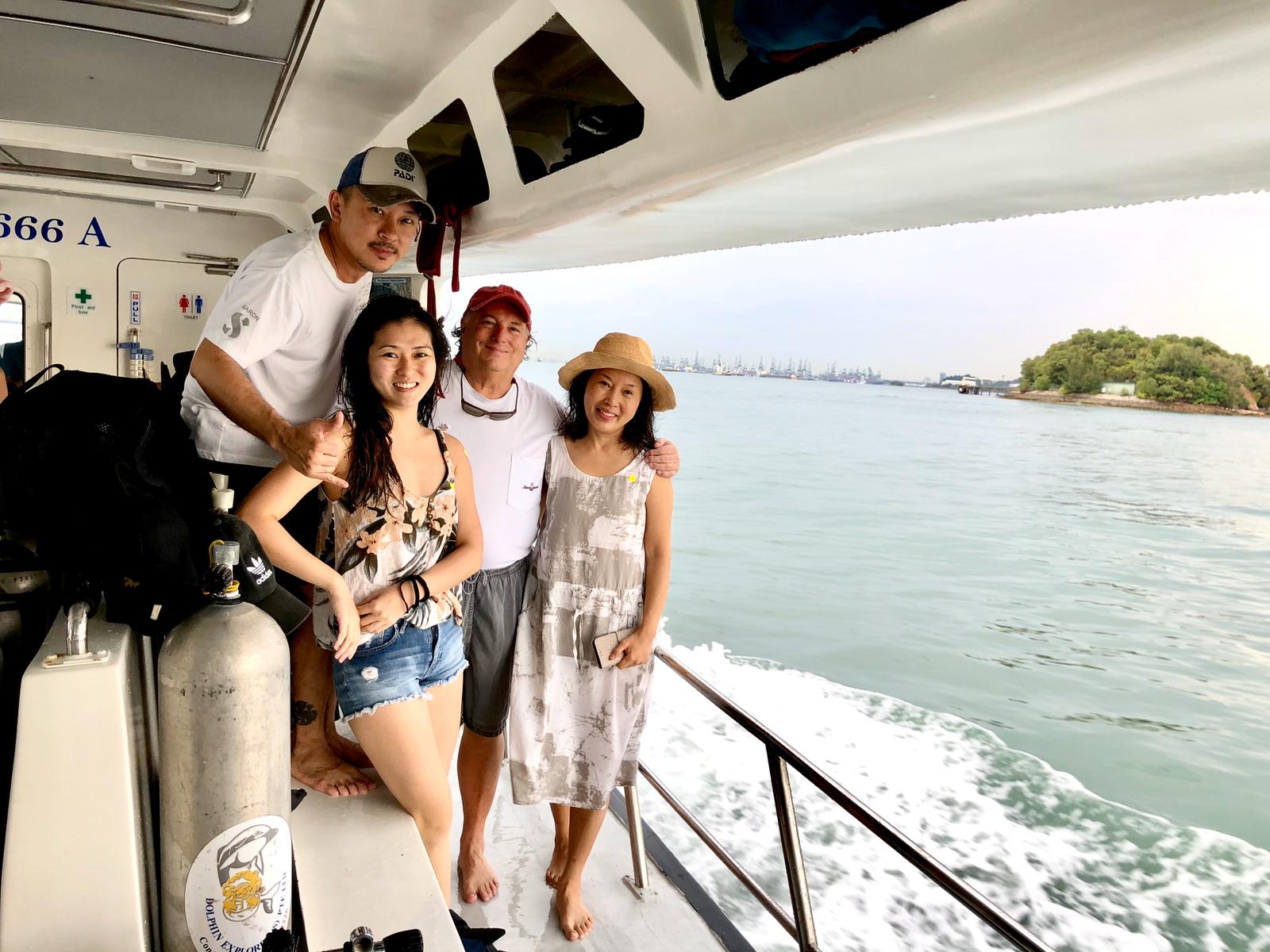 When asked why AQUAPAK decided to sponsor this ocean clean-up, Todd enthusiastically shared that AQUAPAK has been actively involved in many environmental and sustainable projects around the world. And as an avid diver living in Singapore for the past 12 years, Todd says, “I have seen the state of the local waters deteriorate and I find joy in contributing to the transformation of Singapore’s waters into an ‘underwater garden’, vis-à-vis Singapore, commonly referred to as the ‘Garden City’.” It warms my heart knowing that there are companies like AQUAPAK seeking alternatives to help mitigate the plastic problem prevalent around the world.

While preparing for our first dive, I was introduced to my two amazing dive guides, Denise and Zhao Bin. They shared with me what I could expect when underwater, and also provided clear instructions to ensure a safe dive for everyone. Both were extremely helpful and they did their best to cushion my fears. This was much appreciated, especially for someone who has never dived in Singapore waters. During the briefing, we were told to put on gloves and be careful when picking up trash which might have sharp edges and to be wise in making a calculated decision on whether to retrieve certain items. Safety is paramount, and we must look out for each other, especially in such murky waters.

When we were all geared up and did the necessary buddy checks, my heart raced. It had been five months since my last dive and paranoia started to kick in: Are my lungs working the same way as they used to? Will I be able to equalize? Do I actually know how to maintain buoyancy? But I knew I had to do this – I came on this dive trip with the sole purpose of doing my part to tell this story to everyone; to share the conditions of our waters and get more people on board to help solve the pollution problem through the different ways they can. I quickly snapped out of it and inflated my BCD, put my regulator in my mouth, and said a silent prayer before taking a giant stride. 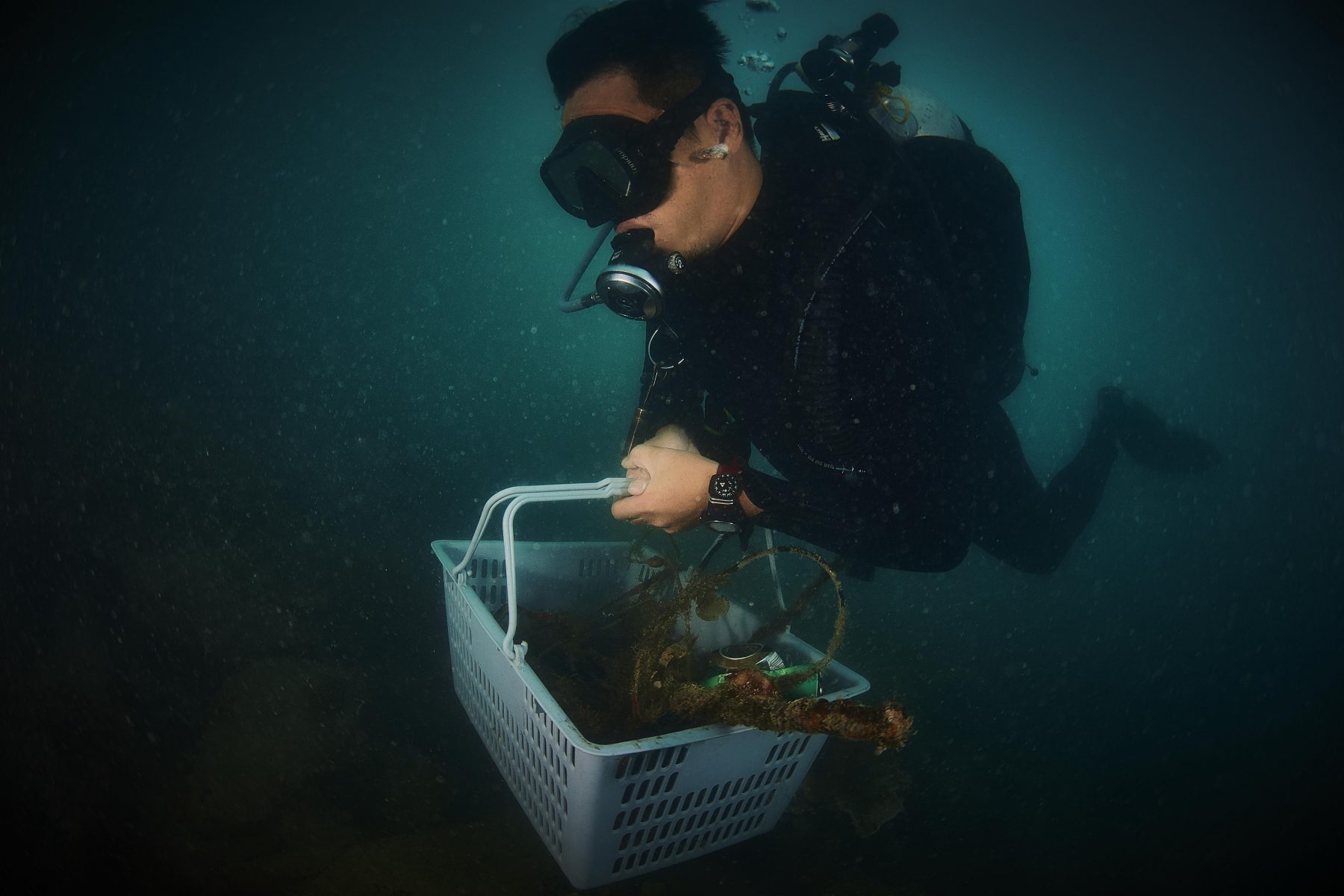 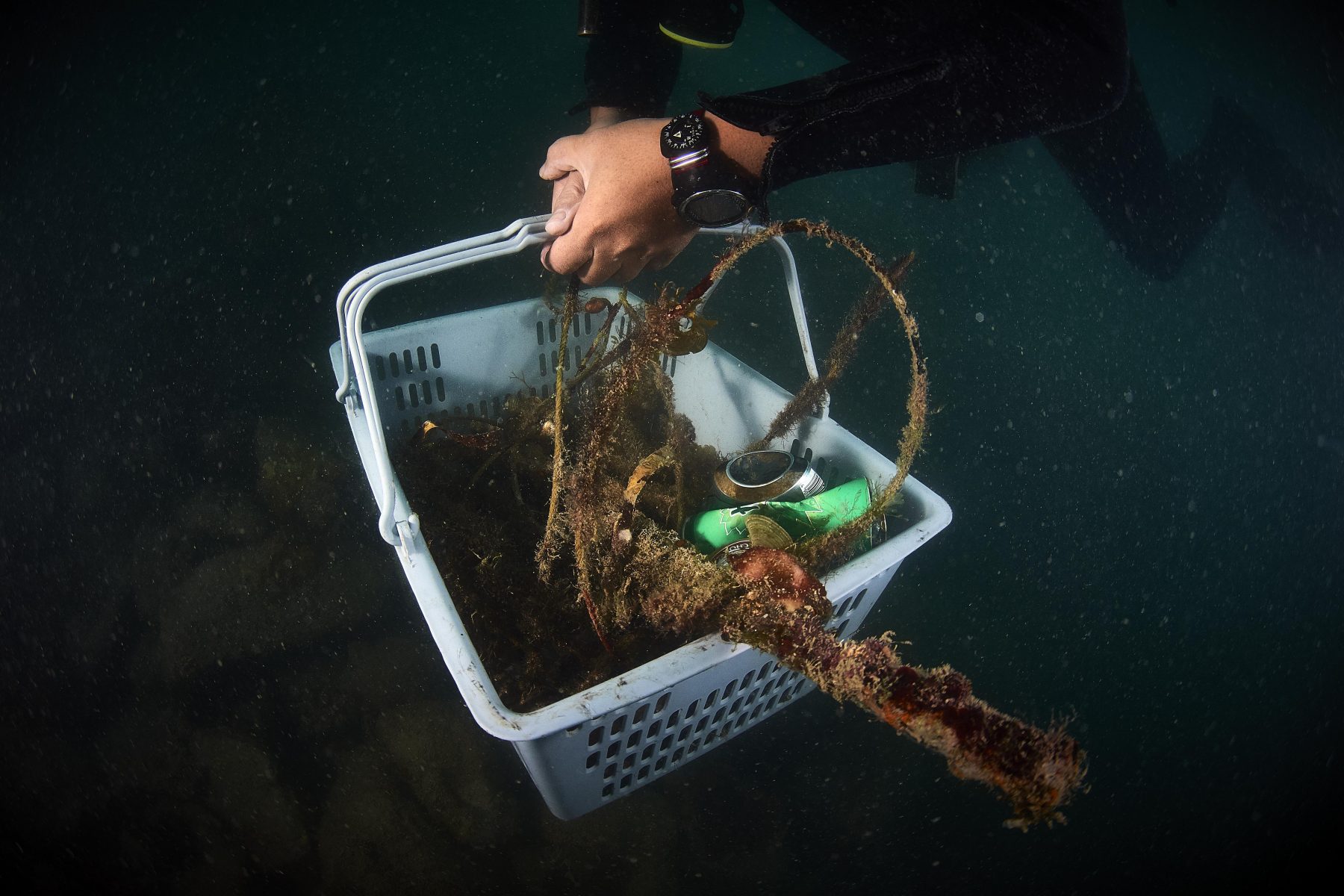 As we descended, I strained my eyes with every ounce of effort I could muster to ensure that Zhao Bin was in sight. The visibility was terrible and the current was pretty strong – everything they say about “diving in Singapore” was manifesting right before my eyes. It was extremely disorientating, and I was unable to make out how far I could see since there was no point of reference.

It was just me in the water with many particles floating around. Those particles really played mind tricks on me. They would be floating in front of me but with so many of them, my eyes did not know which depth of field I should focus on, and everything became a blur. On those few occasions where I had mini panic attacks and lost control of my buoyancy, I landed on the sea bottom. The silt was extremely fine and soft. When I was in Greece, I thought I had touched the softest of sand, but this was a whole new experience with texture – I couldn’t hold it in my hands, it fell off in between my fingers, and because it was so fine, any slight current would stir it up and transport it elsewhere. 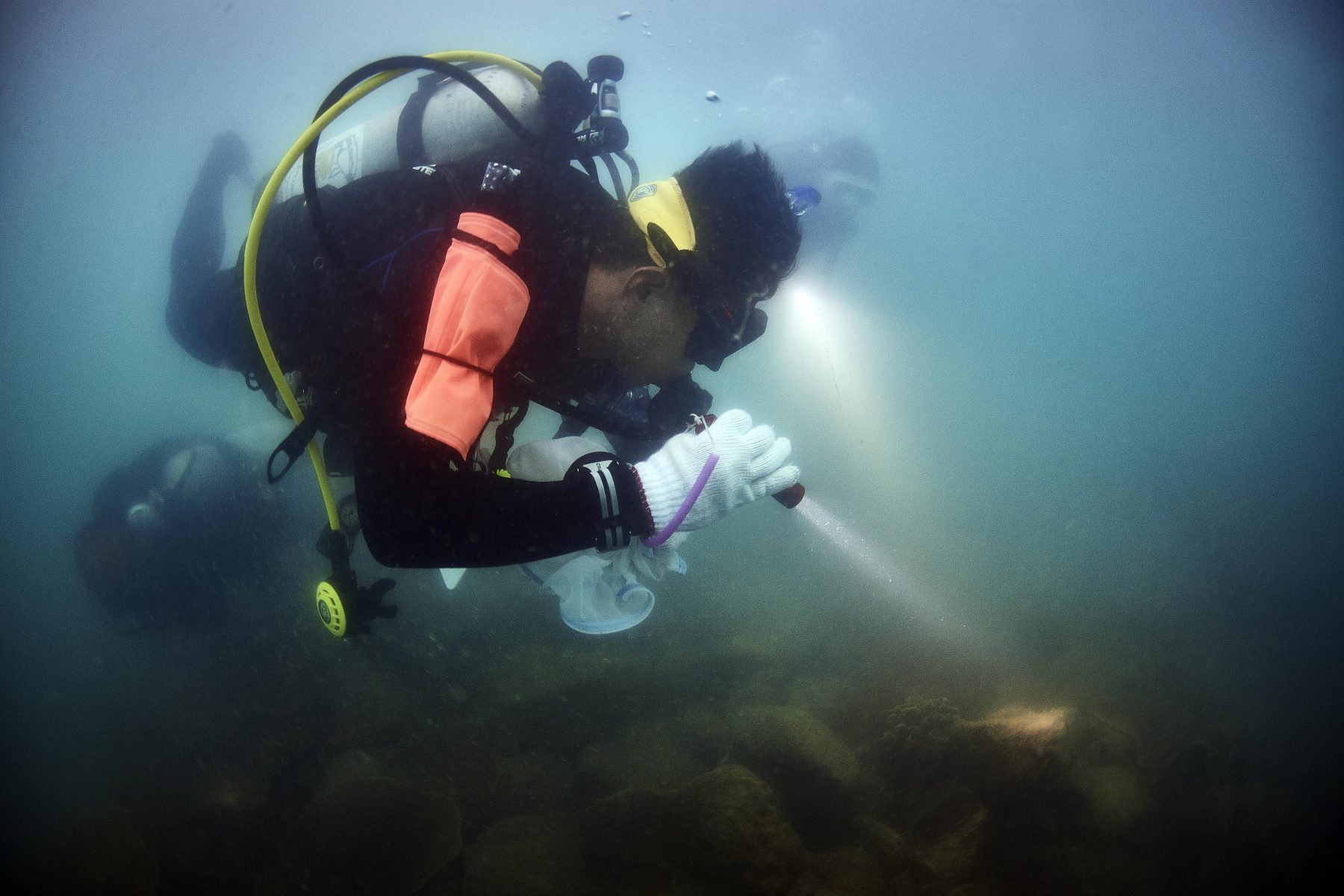 After soaking in all these new elements, I bit onto my mouthpiece a little harder, thanked the universe that I wasn’t claustrophobic, and made sure to follow Zhao Bin wherever he went.

I wasn’t sure which direction we headed towards, but things got better halfway through the dive. As I was getting used to the monotony of being surrounded by nothing but silt and the occasional floating clump of seaweed making its way towards my face, we saw a tinge of orange peeking through the cloud of silt. As we made our way towards it, we witnessed a performance of the soft, orange corals swaying and dancing to the beat of the current. While being entranced by the gentle movement of the corals, a sudden current surged and kicked up the slit around it, and exposed what looked like a plastic bottle covered in algae and other marine debris. 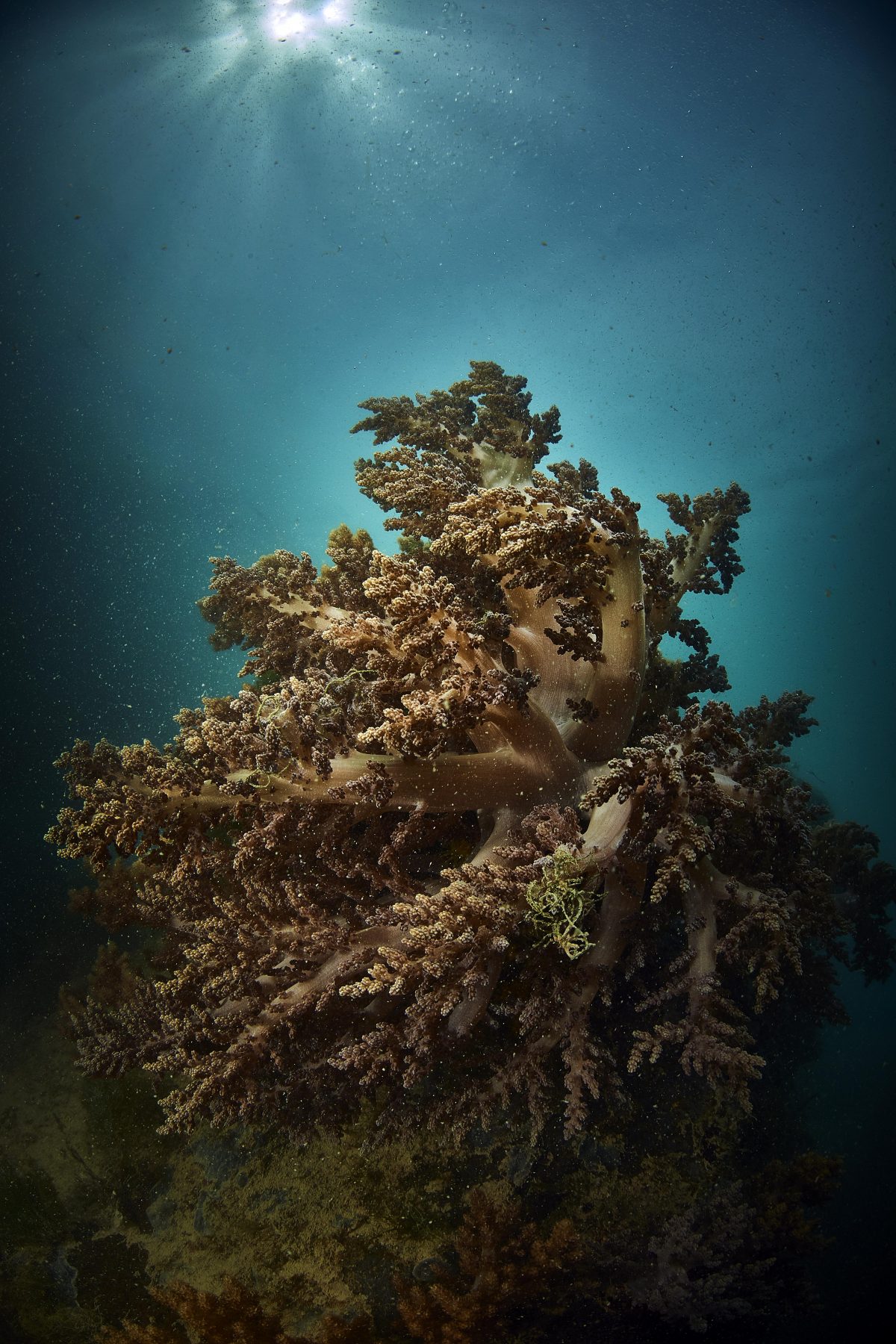 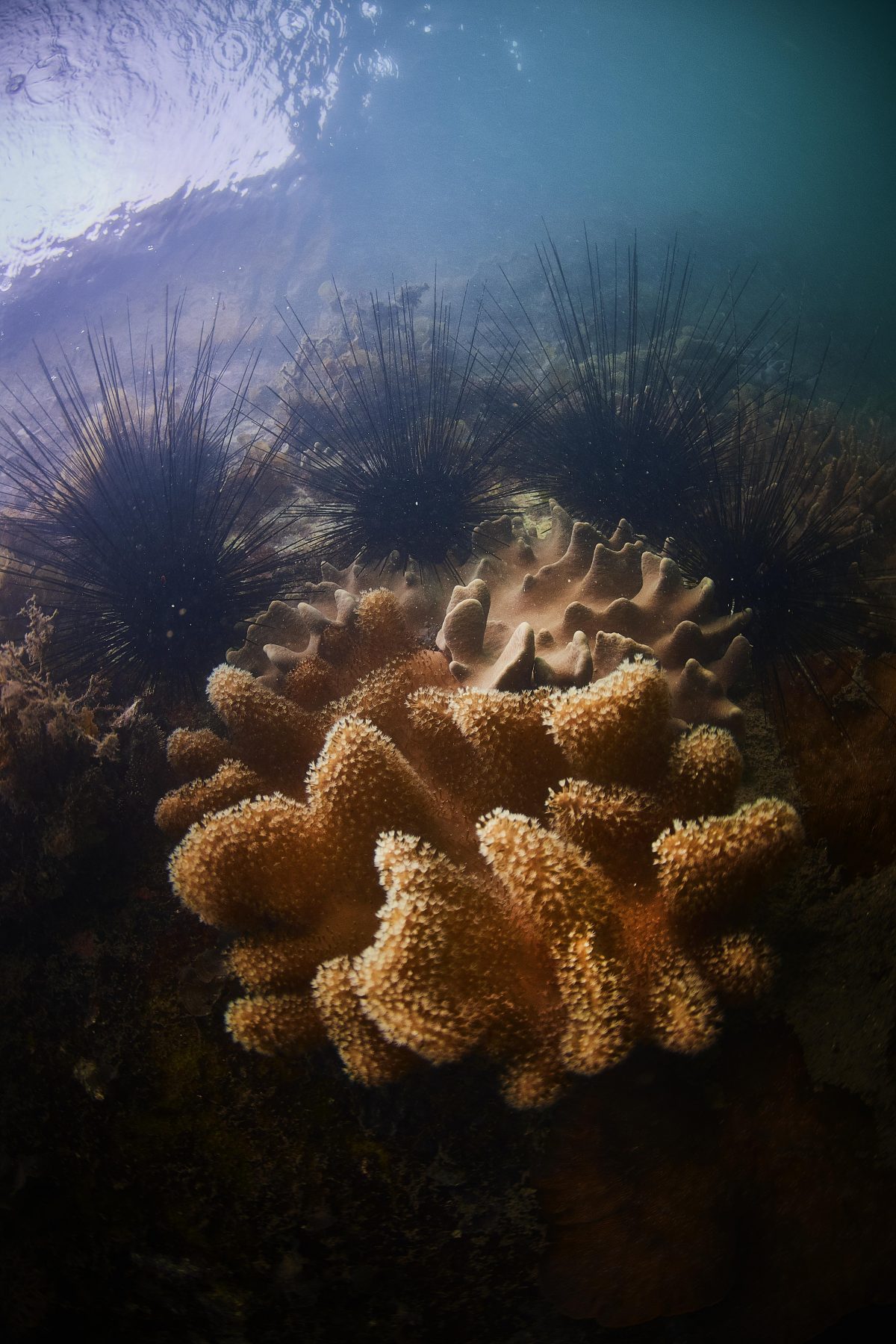 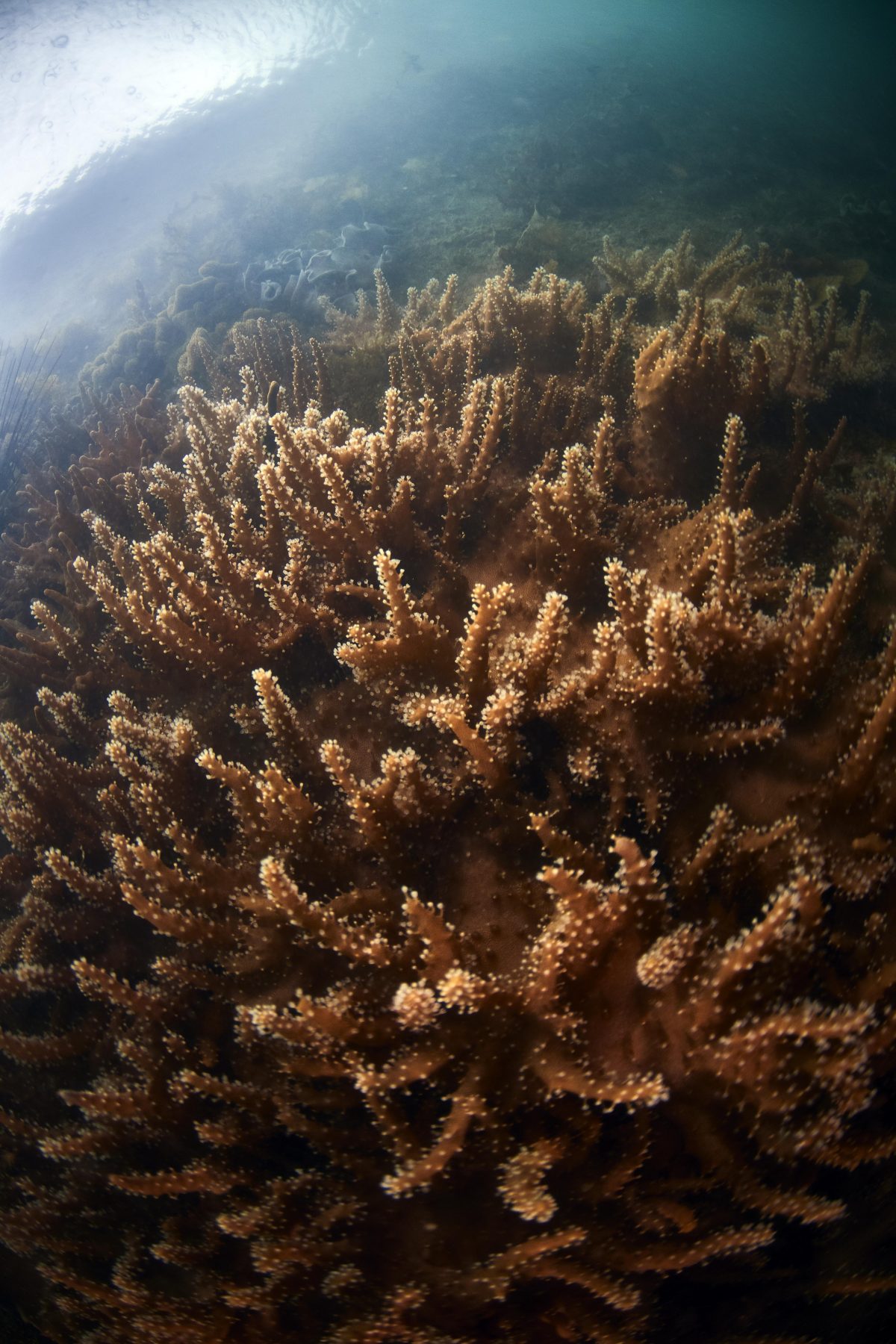 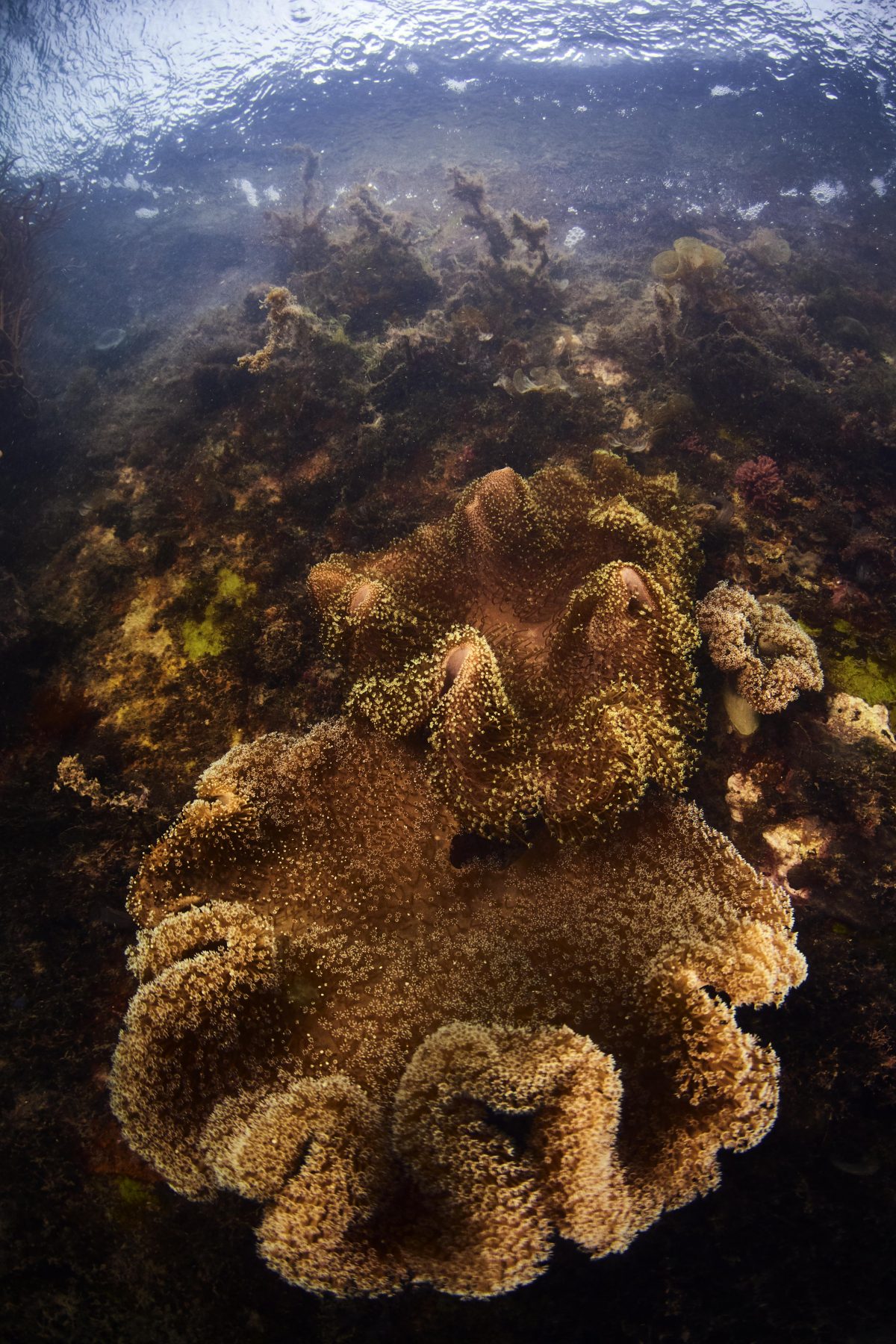 We quickly finned toward it. I picked it up with my gloved hand, and some of the dirt fell off the surface, revealing the label of a mineral water bottle. As I placed it in the mesh bag Lam had brought along with him, I thought about AQUAPAK and the Hydropol material they manufacture – imagine if every plastic bottle, every plastic bag is replaced by this biodegradable material which eventually disintegrates (releasing carbon dioxide and non-toxic biomass), leaving no trace of its existence.

We drifted with the current and saw even more spectacular corals, something which really surprised me. I never thought that we had such beautiful landscape underwater. I finally understood what Todd meant when he mentioned the vision to transform our waters into an underwater garden. Along the way, we bumped into our fellow divers. They were clearly more successful at the task as their baskets were filled with trash of all shapes and forms. We hung around underwater for a while more before ascending and got back on the Dolphin Explorer. 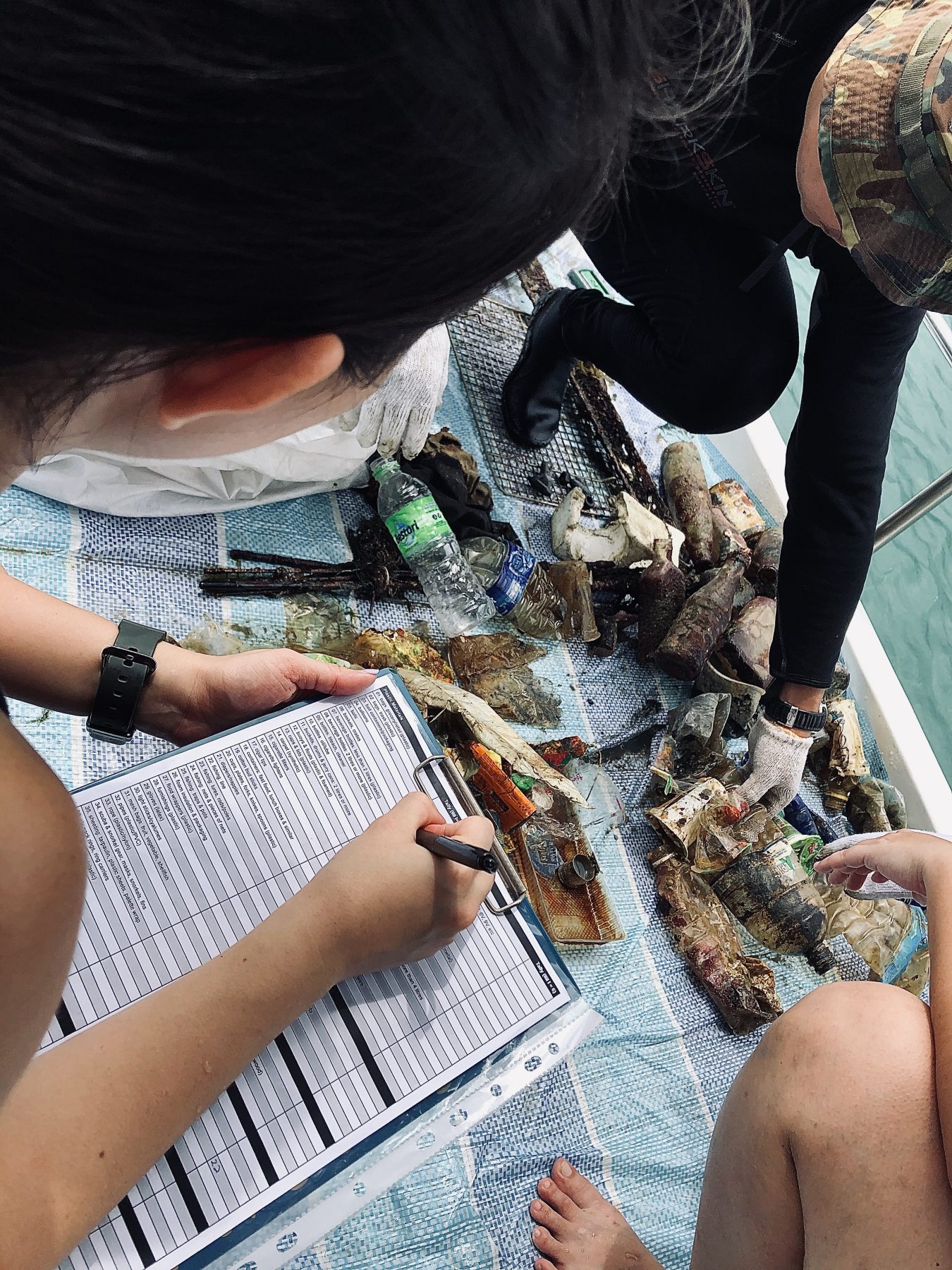 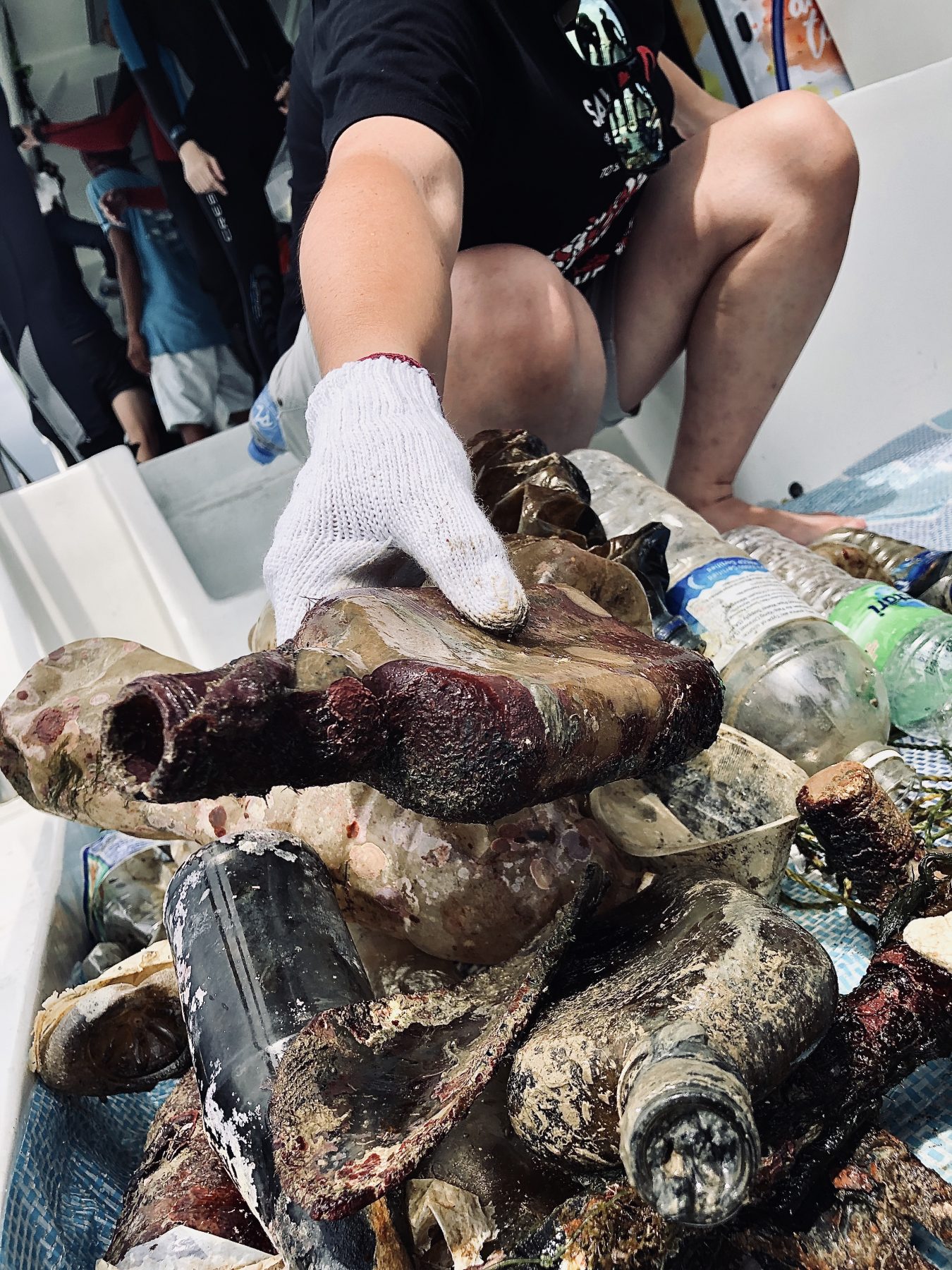 On deck, the team started sorting out the trash on the classic blue and white striped tarpaulin –  glass bottles, plastic bottles, fishing lines, fishing rods, and the likes. We were unsure of where the trash comes from. Perhaps the current brought them into our waters, perhaps those on their private yachts and at the coast took the ocean as a huge bin. As they carefully sorted, a team member recorded down each item retrieved. All this information is uploaded to Project AWARE’s website as part of their Dive Against Debris campaign, which provides valuable data to influence policy change. The top three debris types retrieved were plastic food wrappers (35), metal fishing equipment – sinkers, lures, hooks (22) and fishing lines (21) – quite a predictable mix. 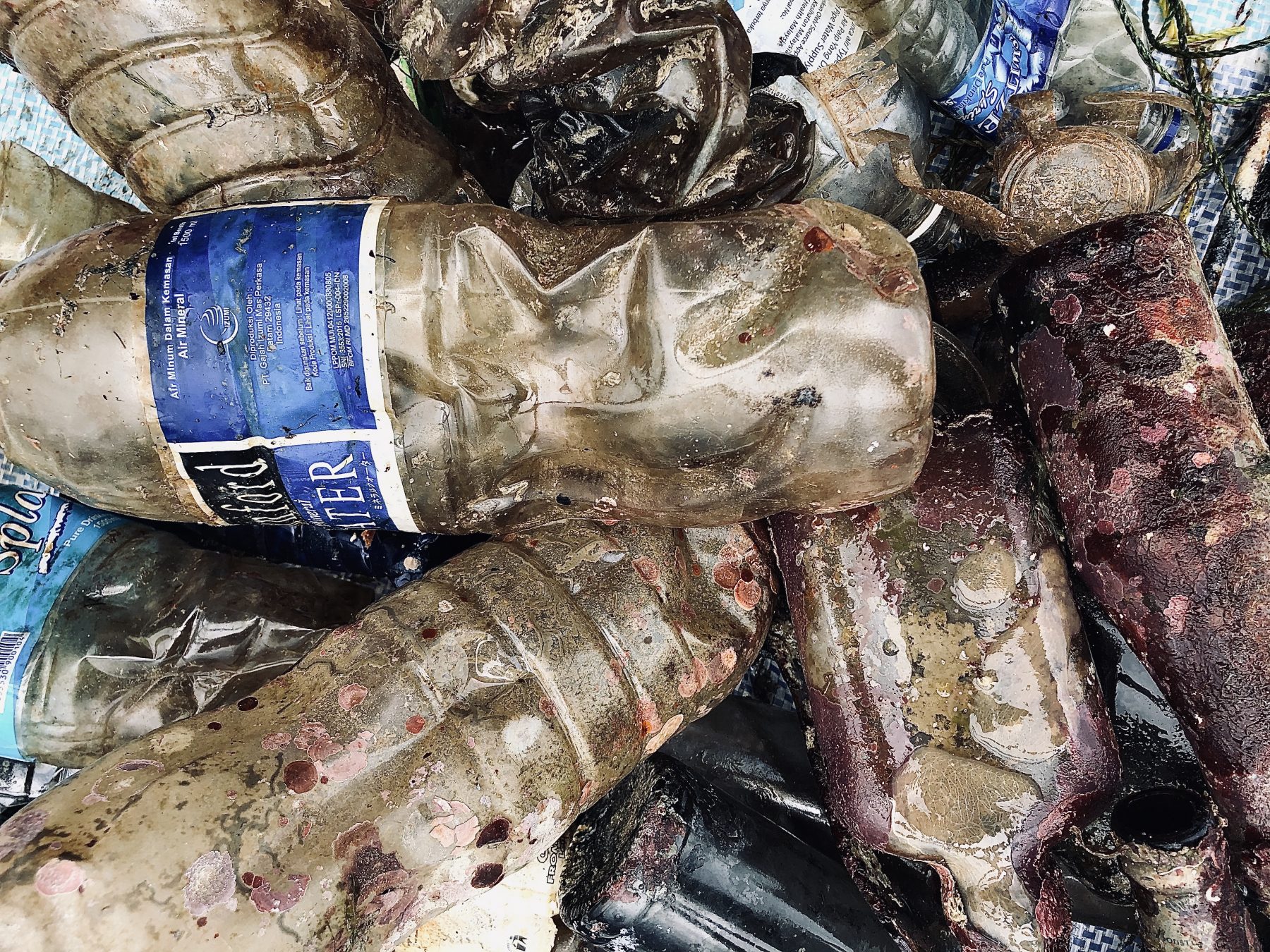 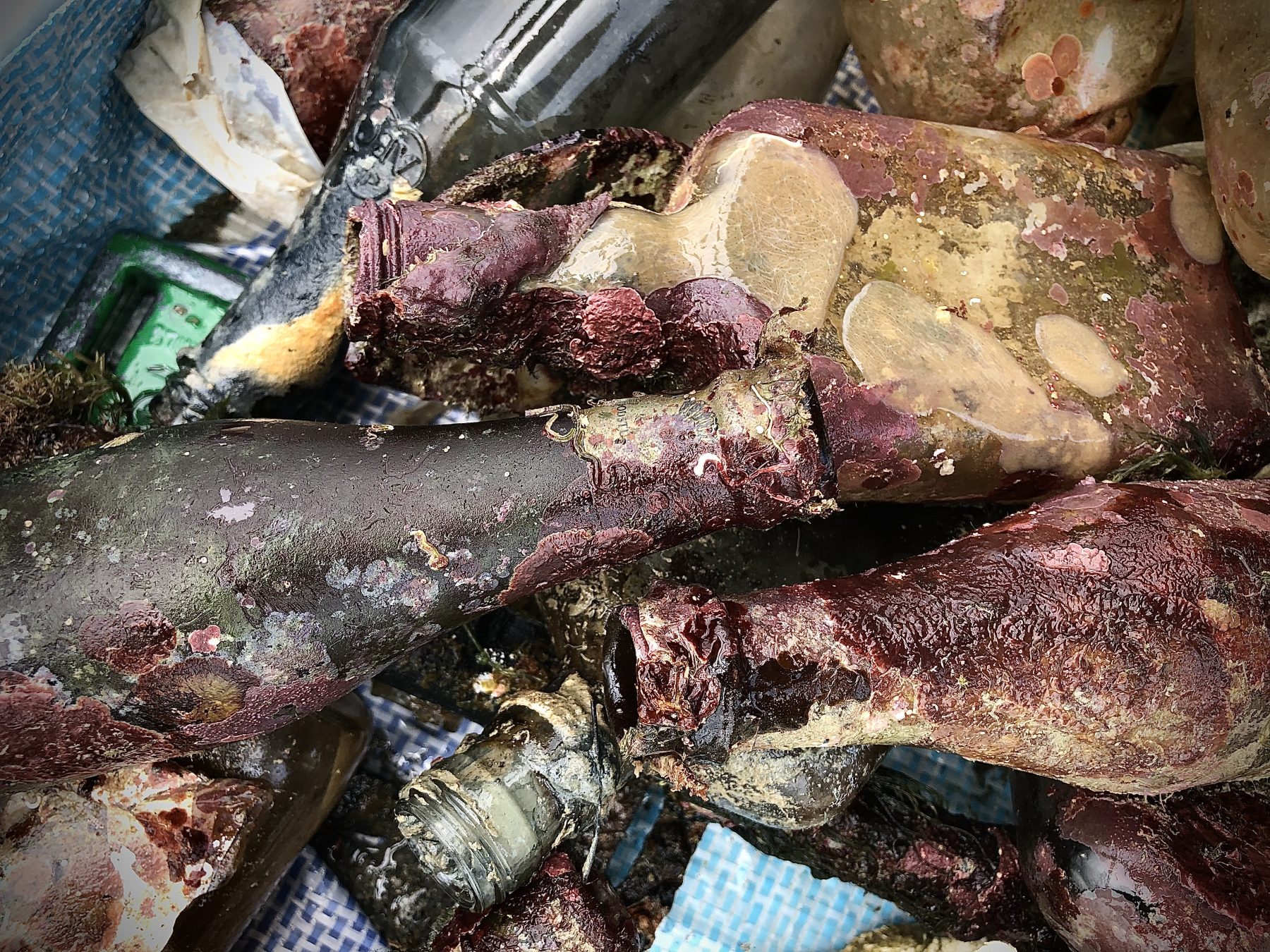 During the surface interval, I had another opportunity to speak to Todd and have him share more about AQUAPAK as I was intrigued by how something so revolutionary had not made it into the mainstream market. He mentioned that based on his clients’ feedback, consumers are willing to pay that slight premium for products that boast environmentally-friendly packaging and initiatives that support the circular economy. It’s just that the uptake is slightly slow for corporations as there are plenty of changes to implement before being able to have it in full swing.

As we set out for our second dive, the sky was getting overcast but we managed to enjoy the pitter-patter of the drizzle, which was quite therapeutic. This time, it was a lot less nerve-wracking as I had already survived the first. The corals on this dive were even more spectacular – there was a whole wall that spanned for as far as I could see with huge plate corals attached to it. We also managed to spot a few fishes, what species I’m not exactly sure but movement from anything else besides silt and seaweed was a real treat. Despite being slightly more comfortable, visibility was still an issue and I still had the constant fear of getting pricked by a sea urchin looming out of the murky waters. With regard to the task at hand, we did not see as much debris to collect and we all took that as a good sign. 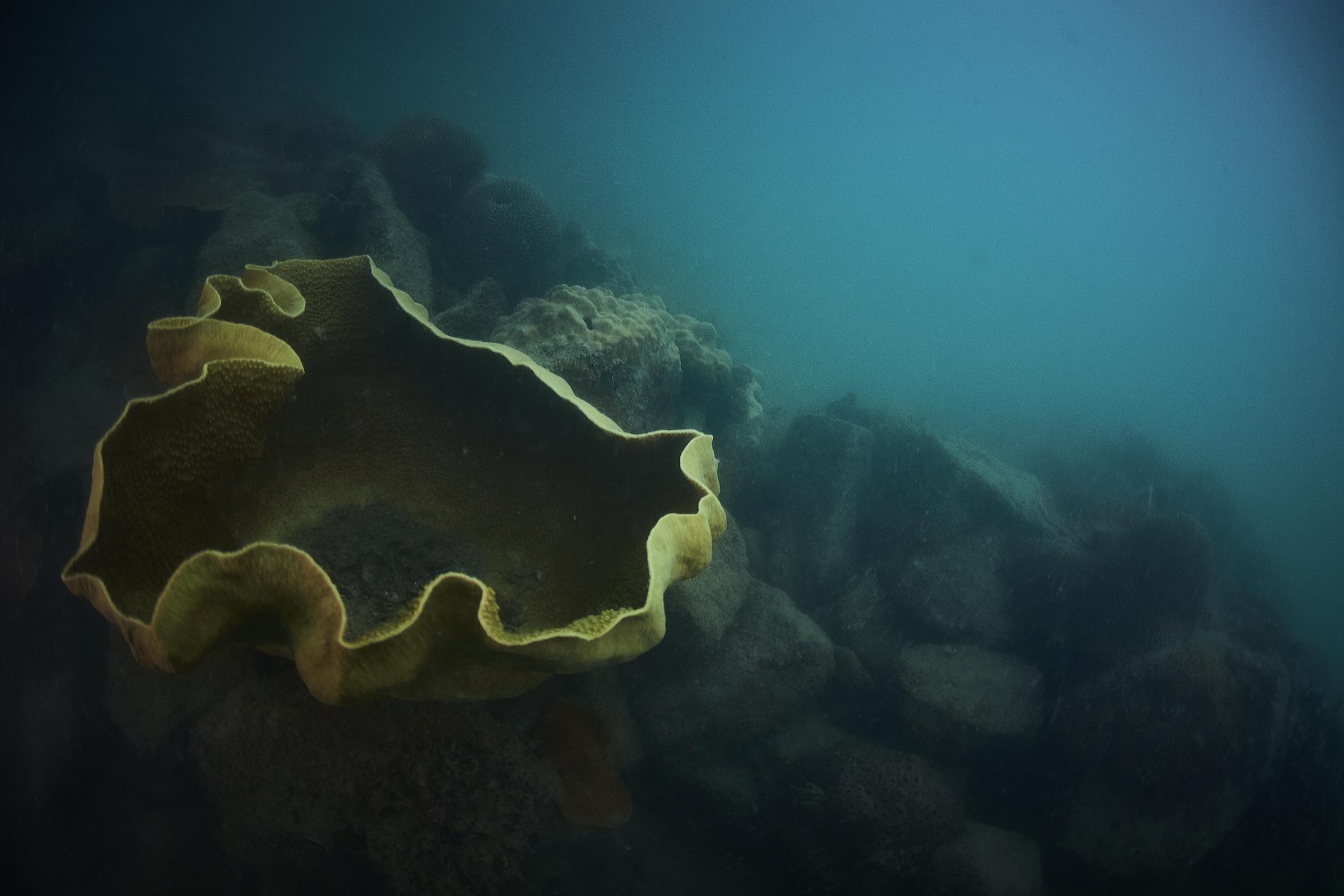 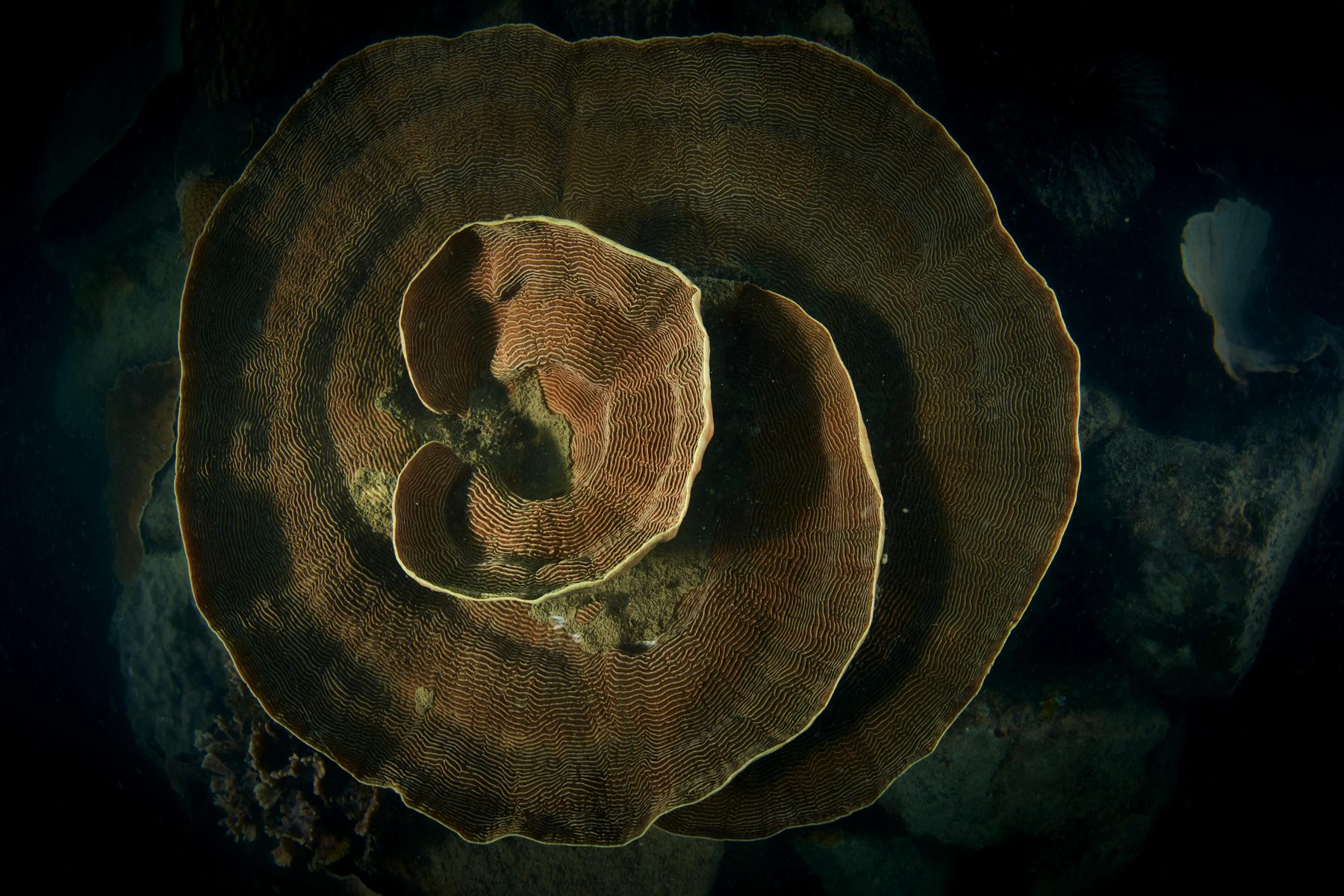 When the ocean clean-up concluded, all of us bade our goodbyes and expressed our gratitude to AQUAPAK for graciously sponsoring this activity – it would have been quite a challenge to persuade me to dive in Singapore waters, what more participate in an ocean clean-up. This opportunity is really something I will hold dear to my heart, putting a little more care into our waters and helping to spread the message to as many people as possible. As we disembarked and made our separate ways, I’m sure we all had the same thought in mind: When will the next ocean clean-up be? 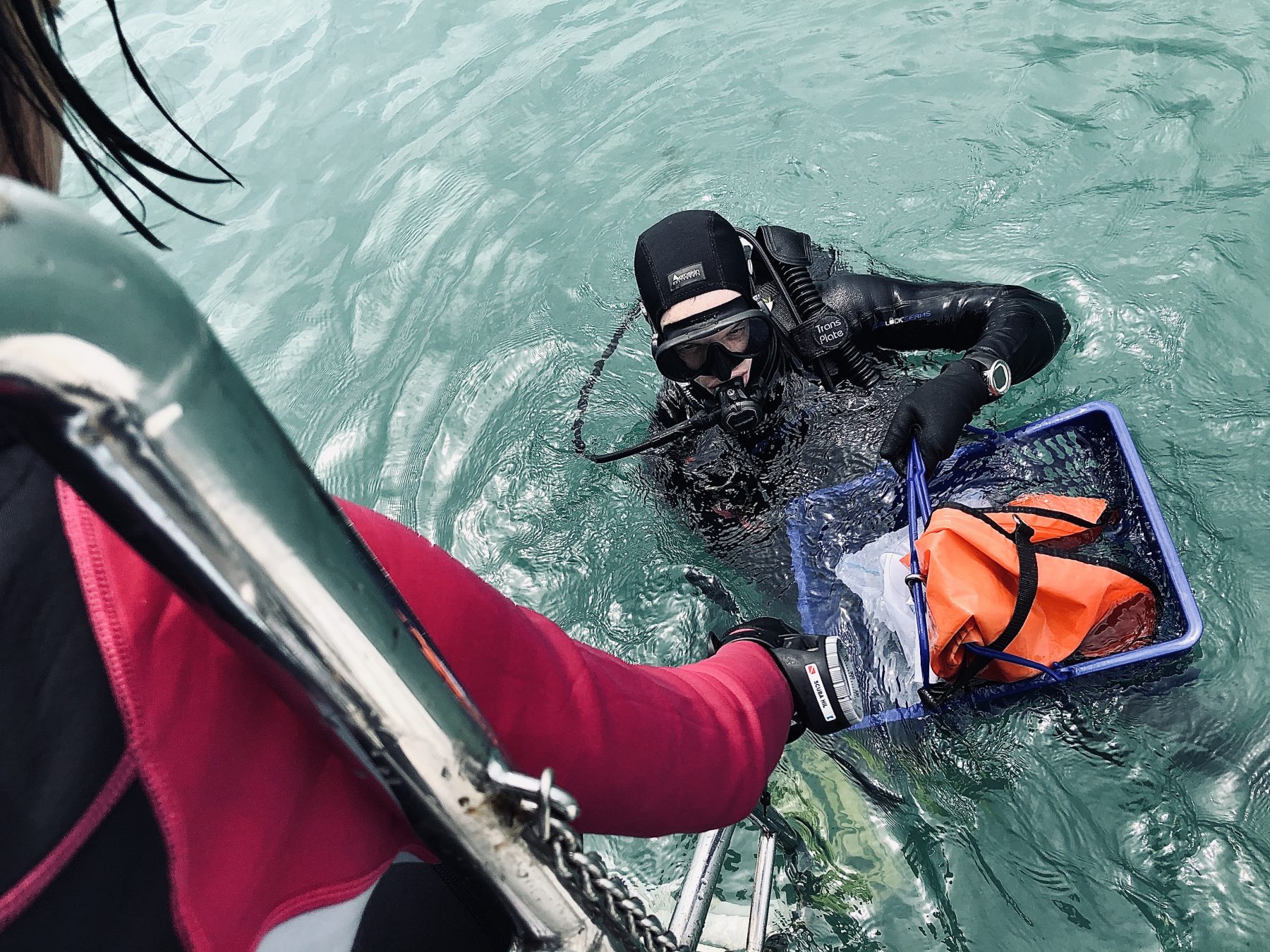 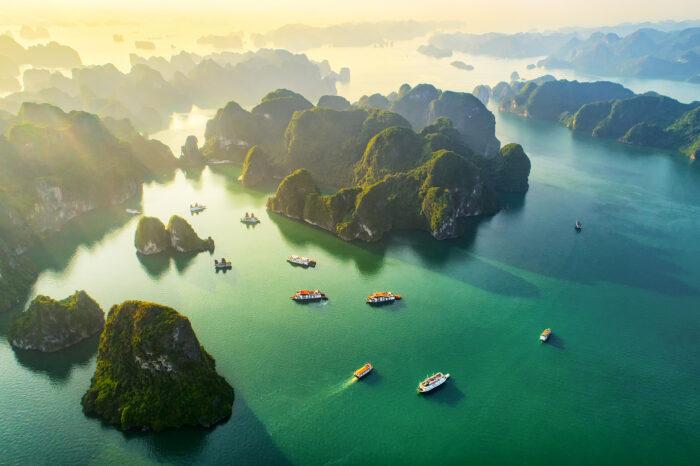 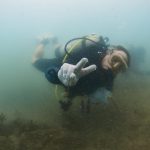