At the foot of the Pulaki Mountains in the northwest of Bali, lies the beautiful bay of Pemuteran. Here, you can find spectacular reefs and a huge variety of marine life only a five-minute boat ride from the coast. It is a real divers’ paradise with coral gardens, drop-offs, muck-dive sites and even an underwater temple! However, the story of Pemuteran was not always a happy one.

In 1998, two things happened, which caused disaster in Pemuteran. First, the Asian economy crashed and Indonesia was hit especially hard by it. It caused thousands of economic refugees to stream into Bali in the hopes of finding work here. Many who could not find work realised the only way to provide for their families was to fish in the waters around Bali, and unfortunately, quite a few turned to dynamite fishing as the fastest way to turn a profit. Others practised cyanide fishing, where poison is used to stun fish that can be caught for the aquarium and live fish trades. The problem with both of these fishing methods is that other than allowing them to catch the target fish, they also lead to the destruction of the reefs.

The second disaster in 1998 was that it was an El Nino year. El Nino is a natural phenomenon, which causes the temperature of the oceans to rise. It is not caused by global warming, but scientists believe that global warming is causing El Nino to occur more frequently and last longer than in the past.

An elaborate strcuture of a deity resting in the middle of a lotus-like construction, where coral gorwth is in an advance stage

Corals live in symbiosis with algae called zooxanthellae, which provide coral polyps with food and oxygen and are also responsible for giving corals their colours. When the water gets too warm, the algae abandon the coral polyps to float in the current as plankton. Without the algae, corals appear bone white and while not dead yet, they are slowly starving. If the water temperature drops, the algae will reoccupy the corals and they will survive, but if the water stays warm for an extended period, the corals will die. This is exactly what happened in many parts of the world, Pemuteran included, in that year. The corals bleached and could not recover, and big portions of the reefs died off.

The local community in Pemuteran in 1998 consisted mainly of fishermen, a lot whom still used traditional fishing methods. They were the hardest hit by these disasters because they had to go a lot further to find fish and their catches were a lot smaller. The tourism industry was also in an uproar because of extensive damage done to the reefs; divers and snorkellers stopped coming and hotels and guesthouses were standing empty. 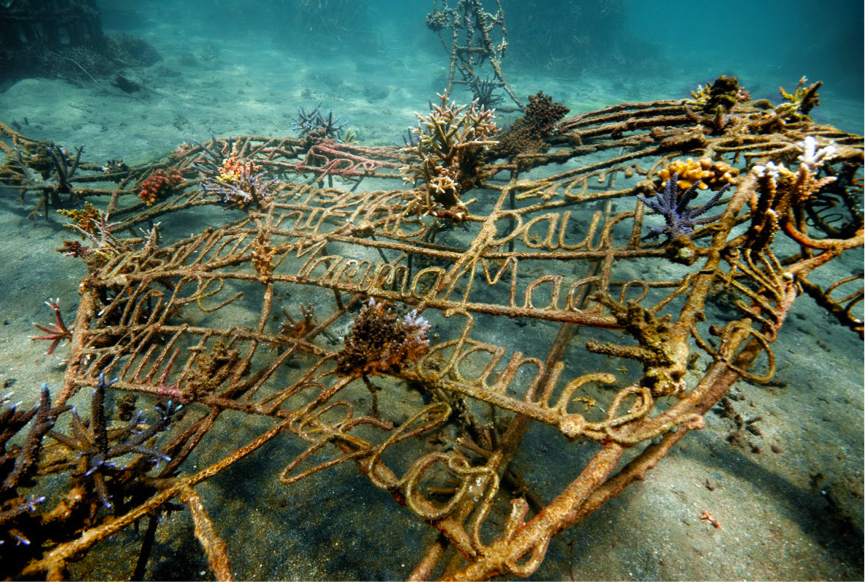 A more customised structure at the beginning stage of development

The Pemuteran community leaders realised that they had to take decisive action, and fast! First of all, they banned all dynamite and cyanide fishing. To enforce this, they formed the Pecalang Laut or Sea Guardians to patrol the reefs in Pemuteran bay with small, high-speed boats. First time offenders were warned, the second time they got caught breaking the rules, the punishment would be more severe. Illegal fishing methods slowly started to decline, but the breaking point came after the Pecalang Laut arrested a big group of fishermen who had bombed a school of tuna.

They were all arrested, their catch confiscated and all the boats were impounded. After that, there was a marked change in the attitude toward fishing in the region and bombing and cyanide fishing stopped completely. It also helped that the community leaders explained to people what they were trying to do and the reasons behind it. 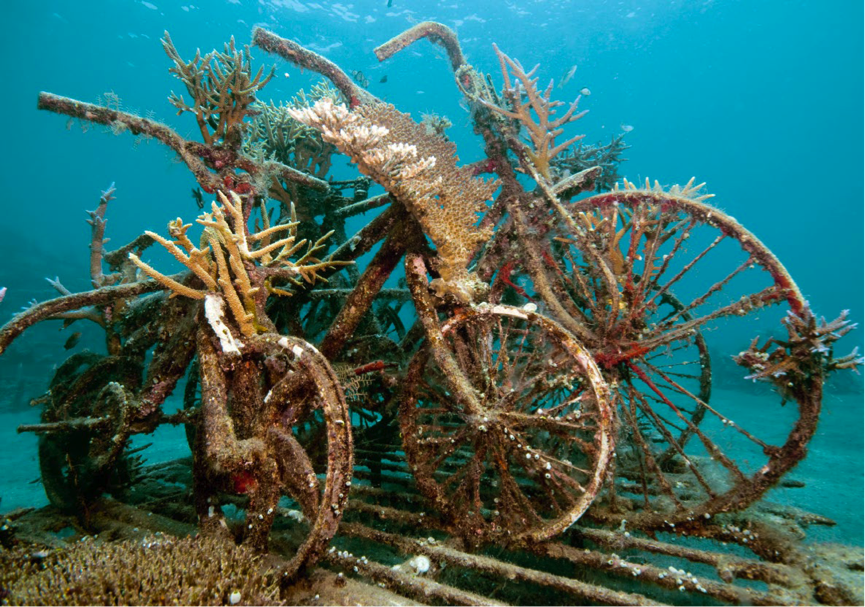 Bicycles! One of the many creative ideas for the Bio-Rock borough at Karang Lestari, here in early growth phase

Another big problem still remained. Most fish nurseries were destroyed and it would take ages for the fish stocks to recover. There were simply not enough healthy portions of reef left to shelter juvenile fish. Help then came from a totally different source! Towards the end of 1998, Yos Amertha, a Pemuteran resident who was also the President of the Balinese Watersports Federation at the time, attended a Coral Reef Restoration Workshop in Thailand. He met two men who would have a massive impact on the future of reefs in Pemuteran. They were Wolf Hilbertz, a German professor of architecture and Tom Goreau, an American marine biologist.

Both of them were worried about the decline of the worlds’ coral reefs and believed that they might have found a way to make a difference. Wolf Hilbertz had just discovered that it was possible to grow “rock” under water through mineral accretion, which is a natural process used by marine animals to build their limestone shells. He had found a way to speed up this process and hoped that it could be used to promote the growth of coral reefs. Tom Goreau had the scientific background in coral reef ecology that was necessary; all they needed was a place to experiment to see if it would work.

Yos Amertha invited Wolf and Tom to Pemuteran in the hope that they could help save the reefs. They started their first experiment in June 2000. The first step was to build metal structures, which would form the foundation of the artificial reefs. This was done with construction steel bars, also known as re-bar, roughly one to one and a half centimetres in diameter, which was bent into different shapes and welded together.

For the rest of this article (Asian Diver 2014 Issue 2 No 131) and other stories, check out our past issues here or download a digital copy here. 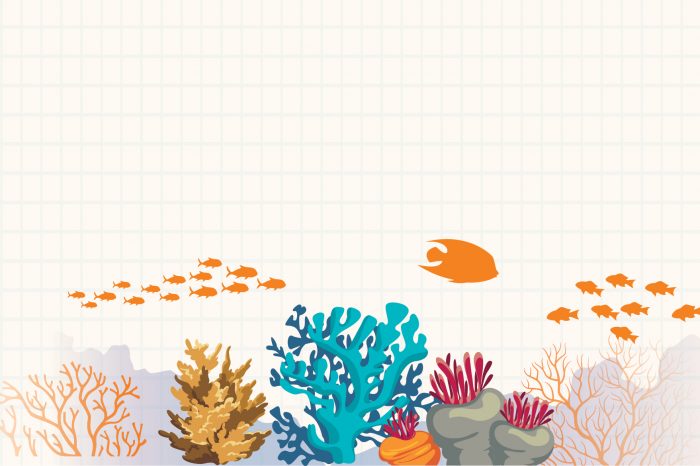 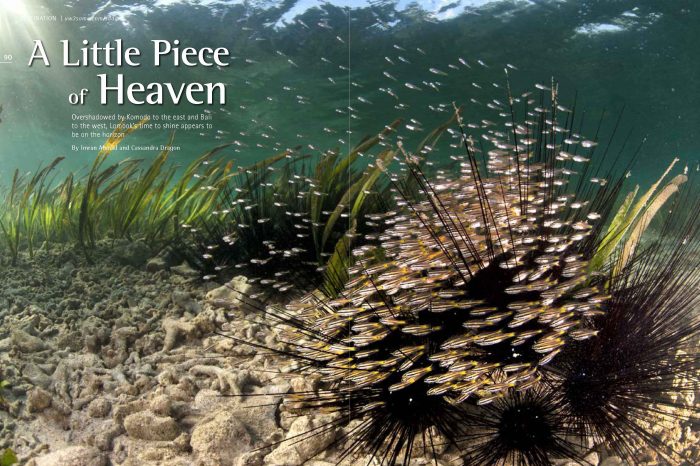 Lombok: A Little Piece of Heaven 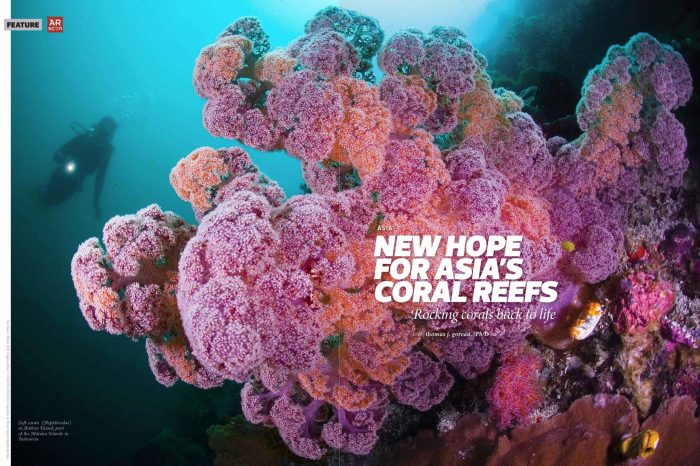 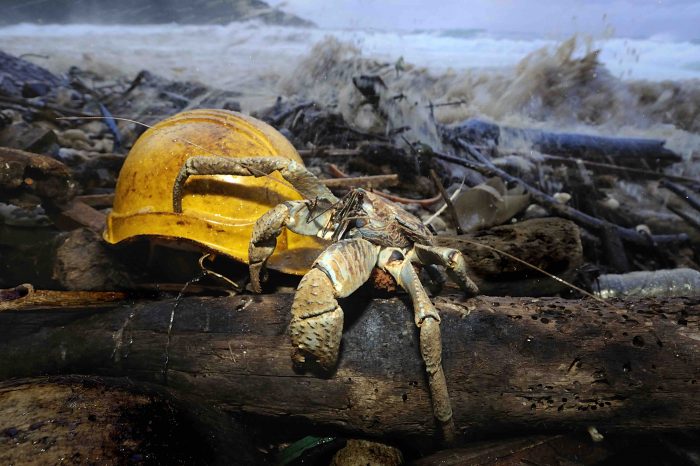 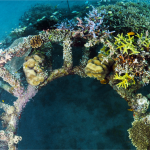