The mating rituals of cephalopods are one of the most intriguing phenomena you can witness. Join Julian Finn, Senior Curator of Marine Invertebrates at Museum Victoria, Australia, as he documents this amazing process (Text and photos by Julian Finn) 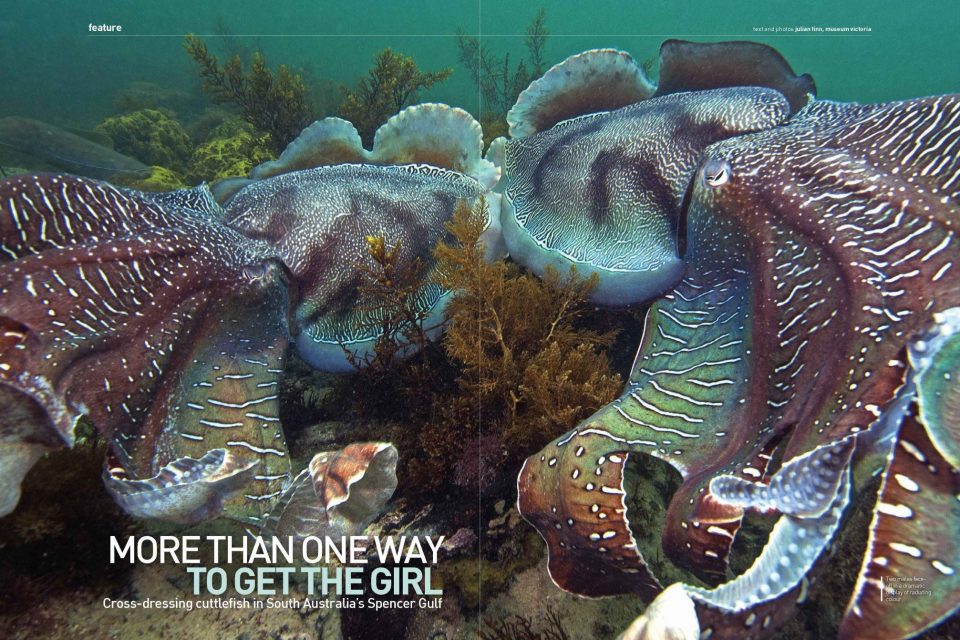 AS WE STOOD on the shore at Point Lowly, looking out over the cold, grey water of South Australia’s Spencer Gulf, we had no idea that we were about to stumble upon a mass-mating phenomenon of world record proportions.

It was the start of winter, in the late 1990s, and I was part of a marine research team surveying marine life in the South Australian gulfs. On arriving at Point Lowly, a rocky outcrop east of the industrial town of Whyalla, we were immediately struck by the activity of marine life in the area. Point Lowly is an oasis, surrounded in every direction by dusty red highways, dotted with smelters and refineries. Looking out to sea, pods of dolphins frolick in the shallow waters, while flocks of Pacific gulls squabble over floating carrion.

As I donned my scuba equipment, enthusiastic to wash away the red dust of previous days on the road, I was intrigued to see thousands of cuttlefish bones littering the intertidal zone. Cuttlefish are cephalo-pods, relatives of octopuses and squids, that possess large, internal, chambered, chalky, white bones (cuttle-bones) that allow them to maintain neutral buoyancy – much like divers’ BCDs. While the odd cuttlebone is a common occurrence on southern Australian beaches, the presence of thousands of cuttlebones on a single shore was unheard of.

After clambering across the rocky shore and dropping down onto my stomach to snorkel out to deeper waters, the explanation for the density of cuttlebones (and the presence of feeding dolphins and gulls) was immediately explained. We had stumbled upon the largest known aggregation of cuttlefish recorded anywhere in the world – a hoard of Australian giant cuttlefish, mating and fighting in a spectacular display of colour and ink. 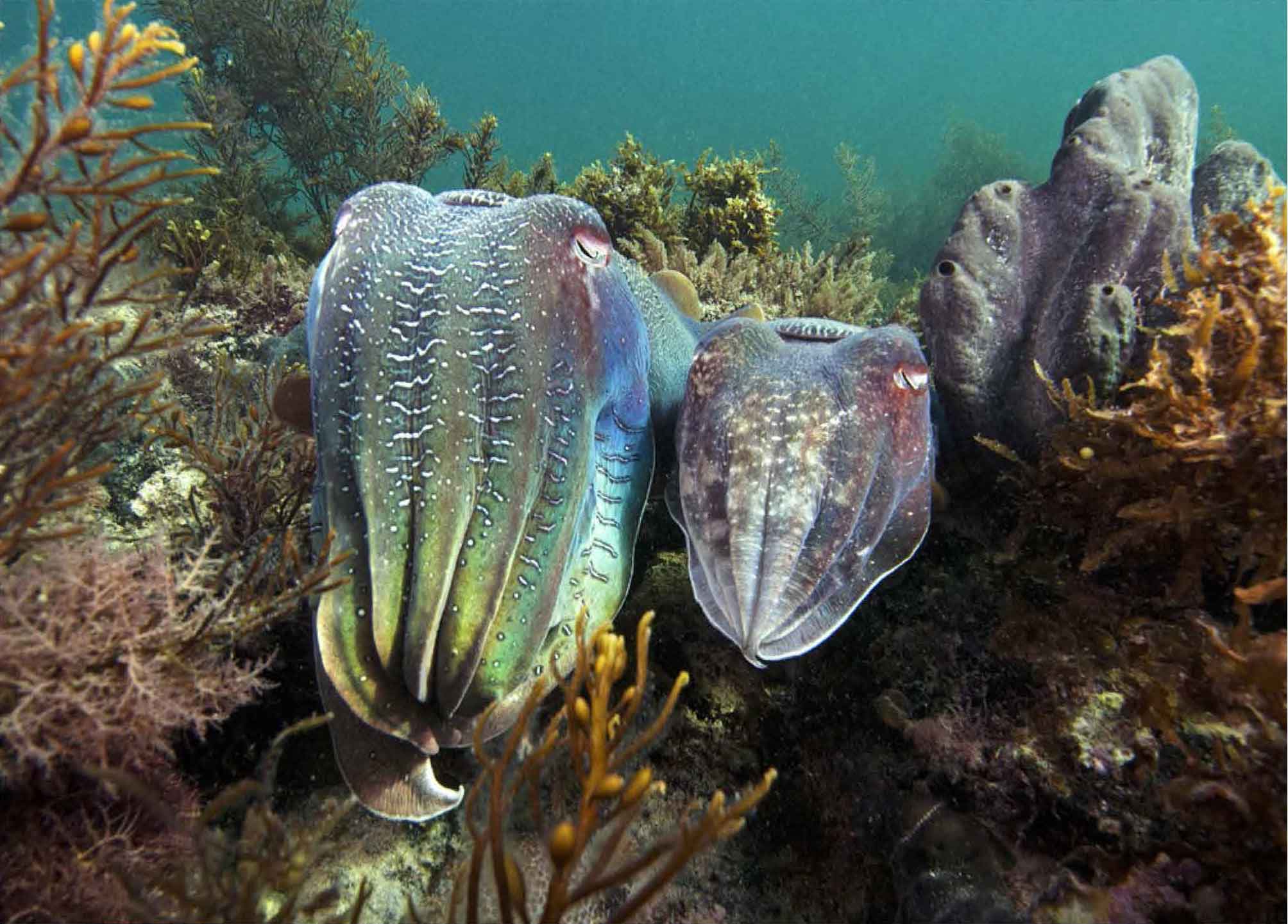 Australian giant cuttlefish (Sepia apama) are the largest cuttlefish in the world, reported to attain total lengths of up to one metre and weights exceeding 10 kilogrammes. Their distribution is known to extend from southern Queensland, through the cool temperate waters of southern Australia, to Western Australia. Male giant cuttlefish grow larger than females and are easily recognised by the presence of large banners off their ventral arms. The smaller females have shorter stubby arms without banners and usually adopt a plain mottled appearance.

Snorkelling out over the large slabs of bedrock, interspersed with patches of algae, I made a feeble attempt at counting the number of cuttlefish I observed: 10, 20, 50, 100, 1,000! It was pointless. Cuttlefish seemed to occupy every available space. On surveying the area, the rocky seafloor appeared to be a patchwork of isolated groups of cuttlefish as far as the eye could see. Later surveys would estimate the number of cuttlefish in this aggregation to exceed 180,000!

Settling down to observe an isolated group of cuttle-fish, it was immediately evident that this wasn’t just a social gathering. These cuttlefish were here for sex and it was happening all around me. Pairs of large males faced-off in dramatic displays of force, flattening their bodies and extending their arms, in an attempt to look as large as possible. As they approached their opponents side-on, waves of colour would radiate out over their bodies and down their arms. This show of force was usually enough to scare off smaller males, however, a confrontation between equally-sized males would quickly escalate to violence. 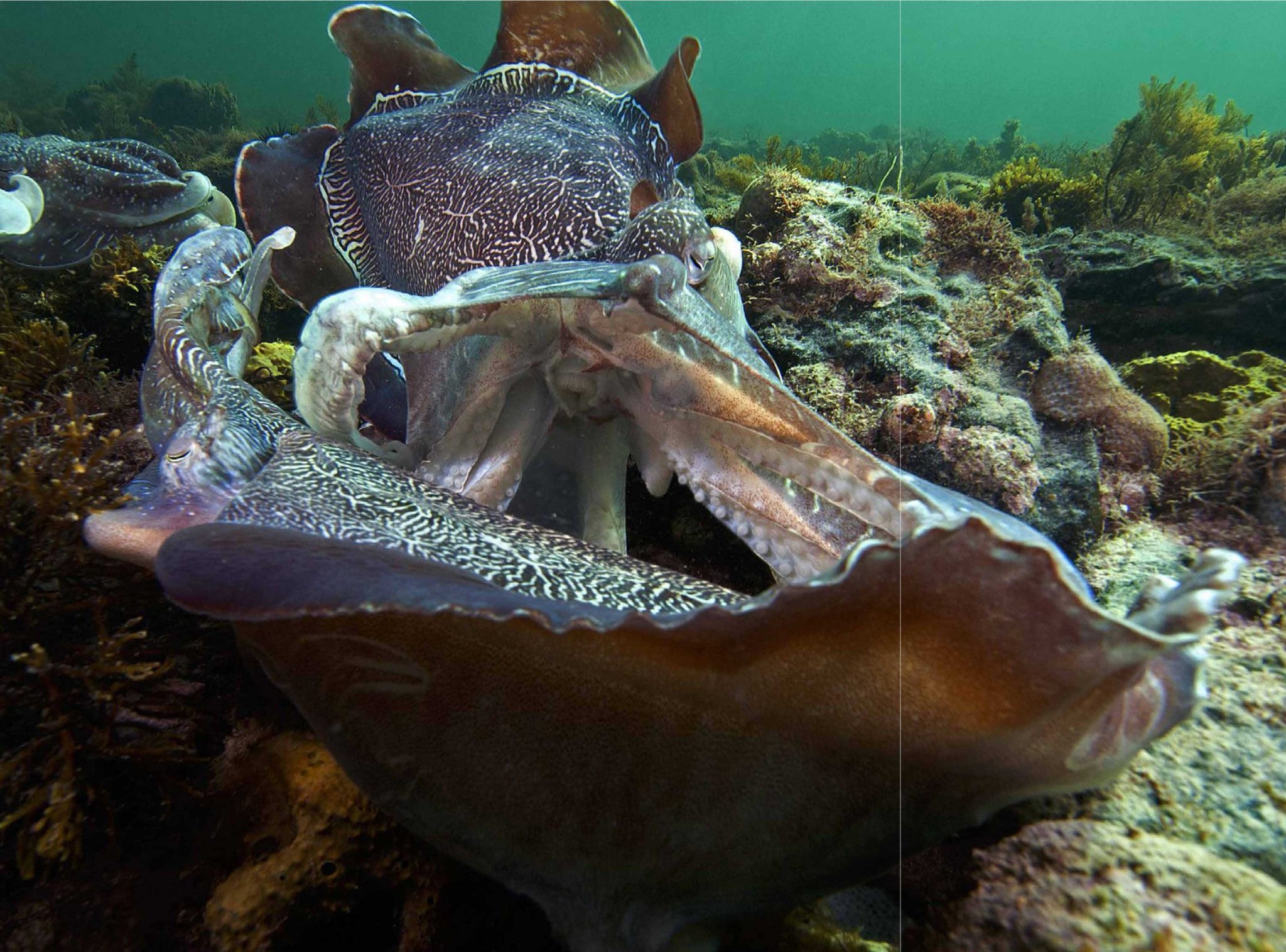 Turning to face an opponent, the more aggressive, or better positioned, of the two males would lunge, grasping with his suckered arms and biting into his opponent’s flesh. Females remained largely oblivious to, or unperturbed by, these displays of male violence, continuing to search for ideal egg-laying sites, as battles erupt around them. On finding a good cave or crevice with a clear level ceiling for egg attachment, the female would lay eggs one at a time, fertilising them with sperm stored around her mouth. When all challenging males had been seen off, the male would interrupt the female to mate. Grasping her face-to-face, he would transfer sperm into special pockets around her mouth, ready for the next batch of eggs she would lay.

As I settled on the sea floor, intent on documenting this behaviour with my camera, I suddenly found myself struggling to follow what was going on. Animals I initially thought to be females would turn out to be males, and vice versa. Putting my camera aside, I focused my attention on one suspicious looking female. While all other females in the area were actively laying eggs, this small mottled individual was just hanging about in the vicinity of a male and female pair. 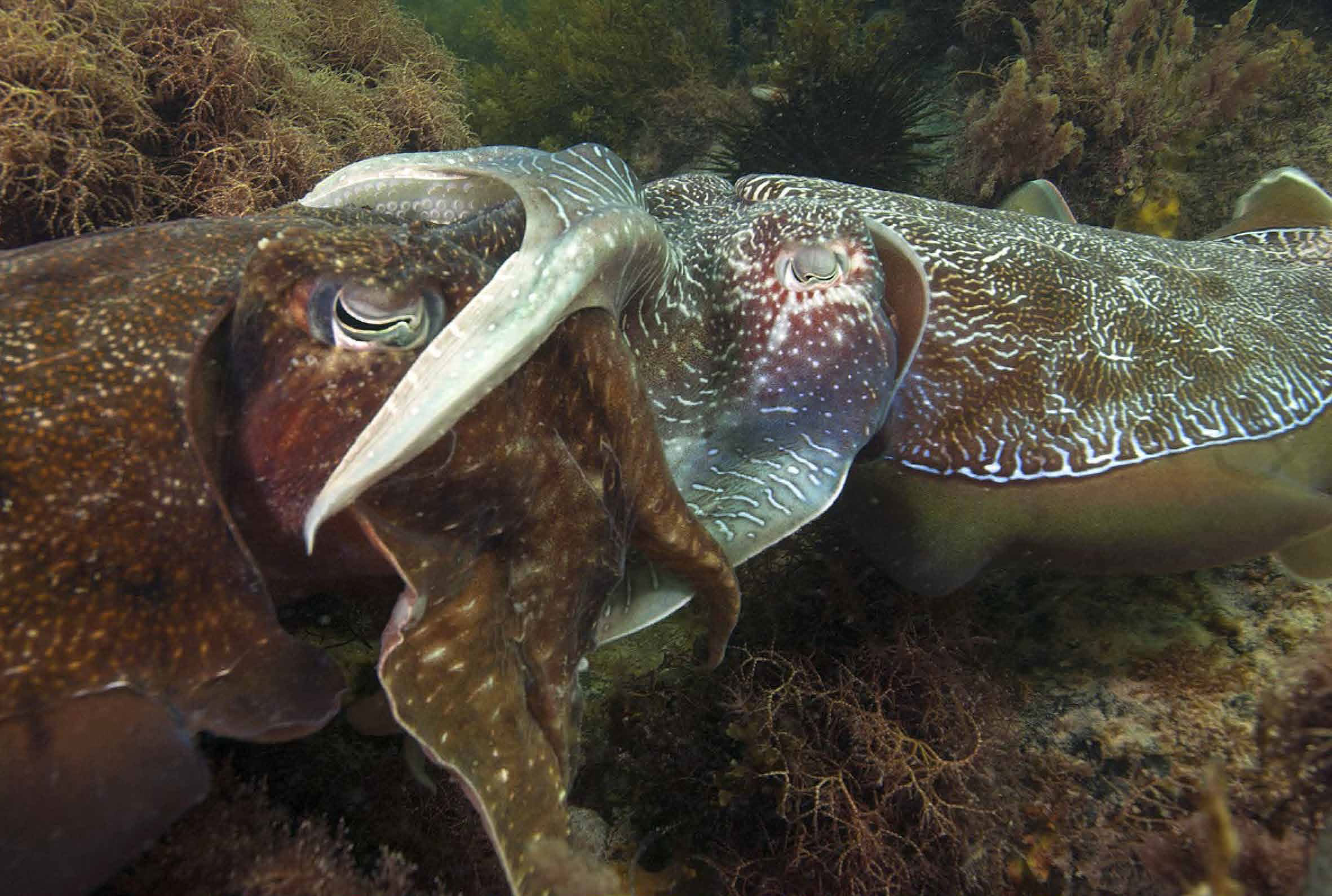 Without warning, a competing male moved over my left shoulder to challenge the dominant male. As the dominant male became embroiled in a standoff, the suspicious female did something amazing; she revealed that she was in fact a male. Releasing the ventral banners, which had been concealed amongst the arms, the small cuttlefish instantaneously took on the colour pattern and appearance of a male. Without delay he darted in, grabbed the momentarily unguarded female and proceeded to mate with her. This little guy was a cross-dressing, sneaker male!

The research into the cuttlefish aggregation that followed revealed that there were in fact two strategies that males can take to get the girl. Firstly, they return to the first cuttlefish aggregation after their hatching (at the tender age of approximately seven months) and adopt a sneaker male strategy. Alternatively, they could wait another year, growing to a larger size and attend the next aggregation as a large dominant male. It was found that both strategies were successful, and the sneaky little male that took on the appearance of a female had as much chance of mating with a female as the larger guys. Sometimes, the females even favoured him. 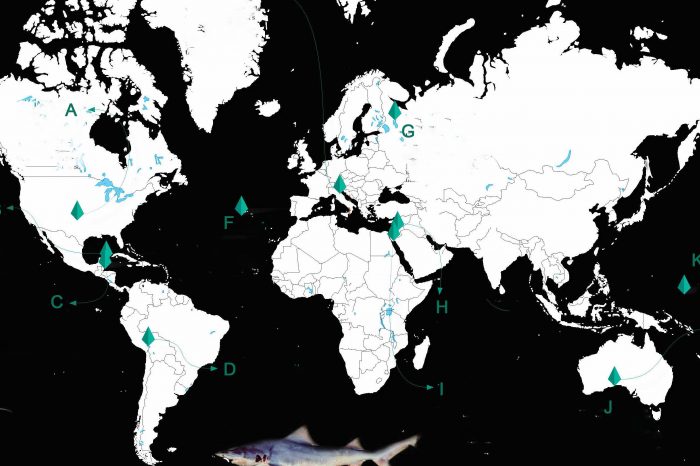 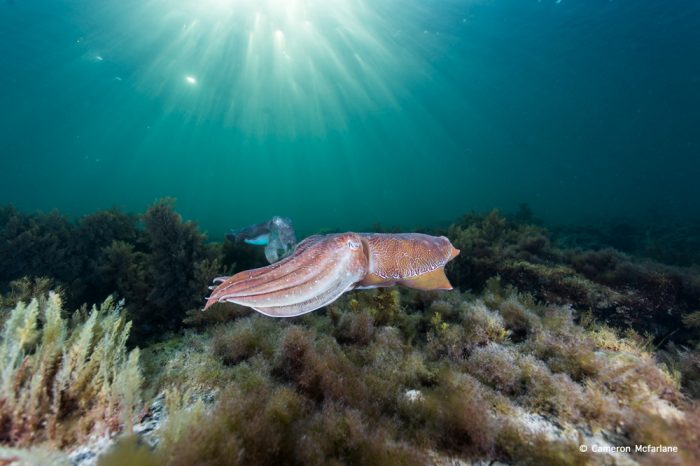 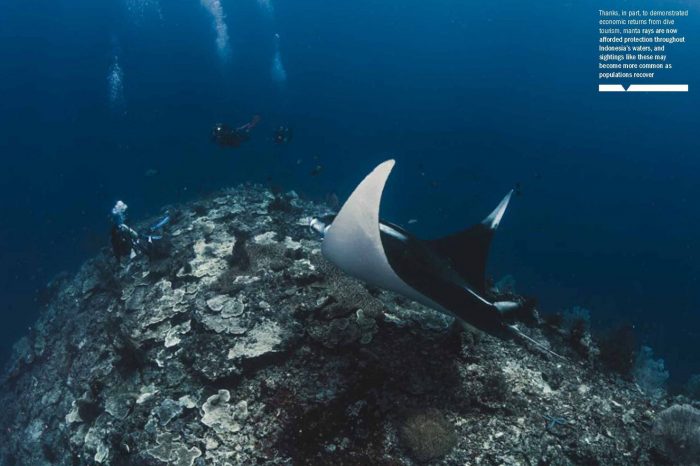 Flying in the Face of Extinction 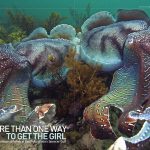