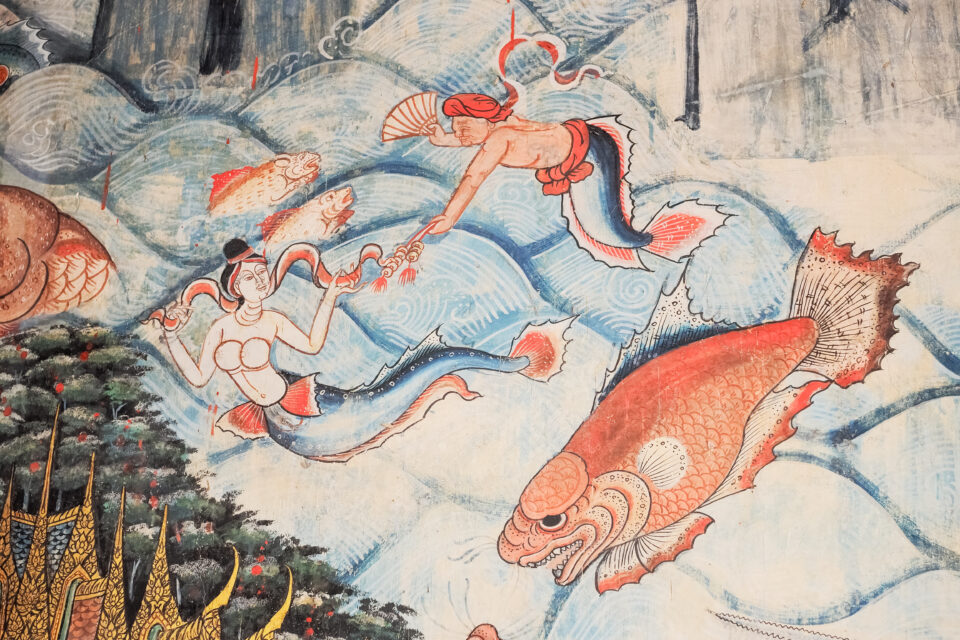 The mythical creatures which inhabit the depths of the ocean give form to water’s essential mysteries. They arouse feelings of curiosity, hope, and bottomless fear. Like water itself, these creatures can be enticing… and frighteningly familiar…

Mermaids also appear in Asian legends and mythologies, sometimes represented similarly to the Western mermaids, but at other times, as monstrous beings with physical features unlike what we’ve seen so far.

Japan speaks of a hybrid, half-human-half-fish called the ningyo, and the most well-known stories are those of Amabie and Yao Bikuni. These are creatures that possess aquatic and human characteristics, although they are quite different from the Western mermaids: They possess long fingers, sharp claws, shining golden scales, deformed heads, horns and salient teeth. They usually have a semi-demonic appearance – not at all seductive. Their tears turn into pearls and their flesh, when consumed, brings eternal youth to those who have done so. One feature they have in common with Western mermaids: a beautiful voice. With time, especially after the late 19th century, the word ningyo acquired connotations similar to those associated with the word “mermaid” in the West: beautiful and seductive. This was in part owed to the mermaid stories told in Japan by the Western sailors that had sailed there.

In the 19th century, thousands of people, mainly in the US and England, visited freak shows to see skeletons and mummified creatures that were believed to be the remains of actual mermaids. Some of them were known as “Japanese mermaids”, since it was said the creatures were caught in Japan by sailors who brought them to the West. After the 1837 publication of The Little Mermaid, by Hans Christian Andersen, the idea of ​​mermaid brides was particularly in vogue, and those who expected a beautiful mermaid found themselves looking at a creature with the lower body of a fish and a head and torso of a monkey. These “handmade mermaids” were so well done that it was impossible to detect where the joints were. The Japanese became famous for being master craftsmen of fake mermaids. The most famous one is known as “The Fiji Mermaid”, which was claimed to have been caught near the Fijian islands, in the South Pacific, but was probably made by Japanese fisherman around 1810. 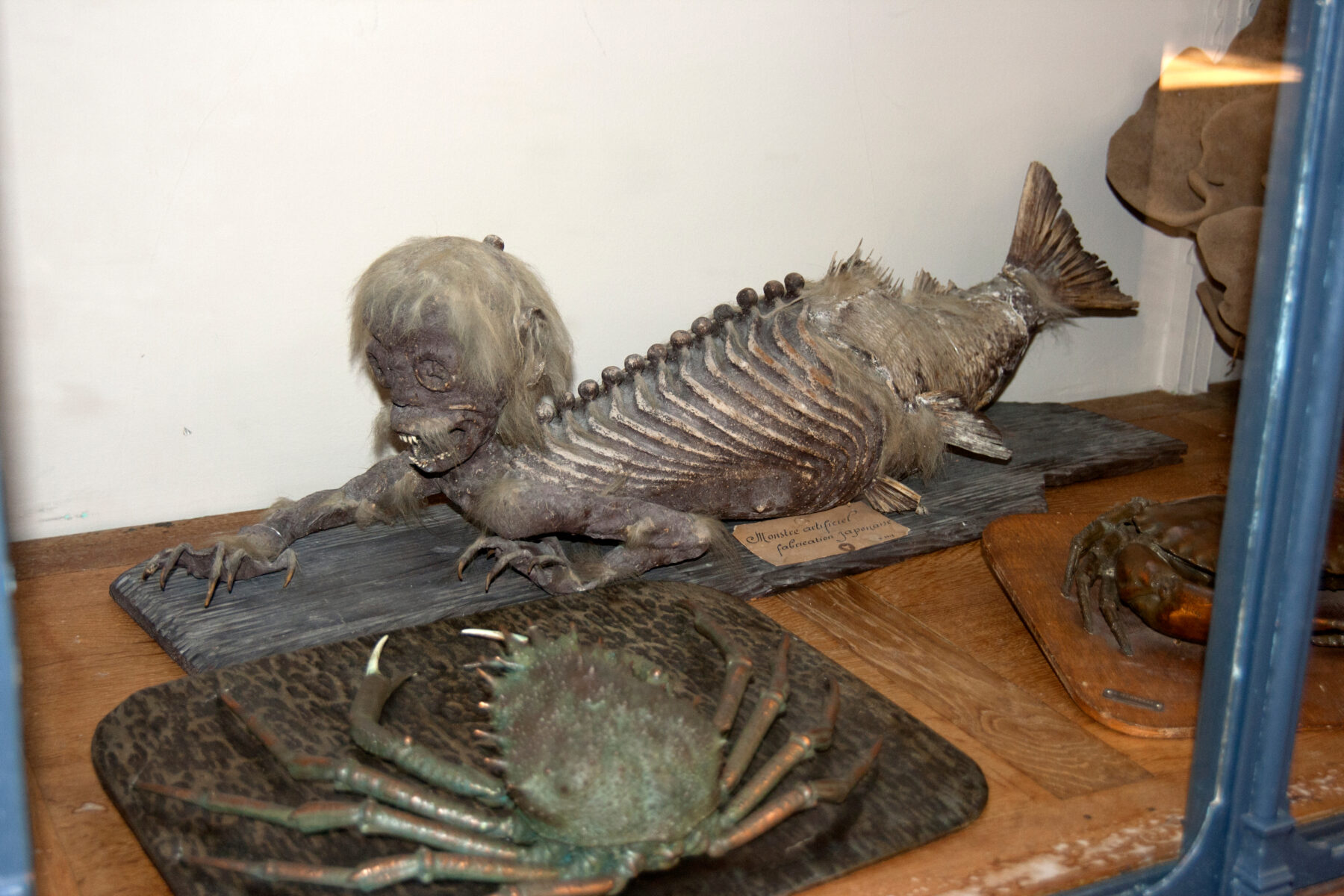 In Indian culture, we can find the Matsya, the fish avatar of Vishnu in Hindu mythology. Sometimes it is depicted as having the upper body of a man and the lower body of a fish. But, most of the time, we can see Vishnu emerging from the fish’s mouth. It’s not exactly an amphibian creature, as the Naga, an anthropomorphic half-man-half-serpent, is presented in Indian and other southeast Asian legends and myths as water spirits. In some cases, the serpents are replaced by dragons. The Nagas are serpents who inhabited rivers and pools and could change their form at will. Sometimes they were depicted as demons, but the female Naga, the Nagini, can be represented as a sensual woman, associated with bodies of water, fertility, and protection, playing roles similar to mermaids in Western culture.

Mermaids are mentioned in some Chinese works, such as the Shan Hai Jing, a compilation of Chinese geography and mythology from the fourth century BC that refers to mermaids as ling yu or ren yu. The book also mentions other types of mermaid, such as chi ru, di ren and hu ren. Interestingly, some of them had four feet and could emit a sound similar to that of a crying baby; others could even resurrect after death.

A book written in the Ming Dynasty (1368-1644), Sou Shen Ji, refers to mermaids living in the South China Sea: They were called jiao ren and were excellent craftswomen who would weave cloth that could never get wet. Hermaphrodite mermaids with black skin, yellow hair, human eyes, webbed hands and feet, and red wings are mentioned in Hai Cuo Tu, a book written by the biologist Nie Huang from the Qing Dynasty (1644-1911). Similar to the Japanese ningyo, the Chinese mermaids were famous for their tears that turned into pearls. Because of this, mermaids were largely depicted in literary stories as lonely, tragic figures who sacrificed themselves for love.

We can find the “Golden Mermaid”, Suvannamaccha, in the Thai version of the Ramayana – a highly-revered piece of Indian literature. A mermaid princess and daughter of Tosakanth, she falls in love with Hanuman, one of the central characters in the various versions of the epic. She tries to spoil Hanuman’s plans to build a bridge from India to Sri Lanka to rescue Sita, another central figure of the story. Nevertheless, she falls in love with Hanuman. She is a very popular figure of Thai folklore, with her statue erected in many houses and shops in Thailand for good luck. Her character most likely inspired the Thai poet Sunthorn Phu, who created another “Golden Mermaid” for his book Phra Aphai Mani, which has been very popular in Thailand since the 19th century. A golden mermaid statue in Laem Samila Beach, in Thailand’s Songkhla province, is dedicated to Suvannamaccha. 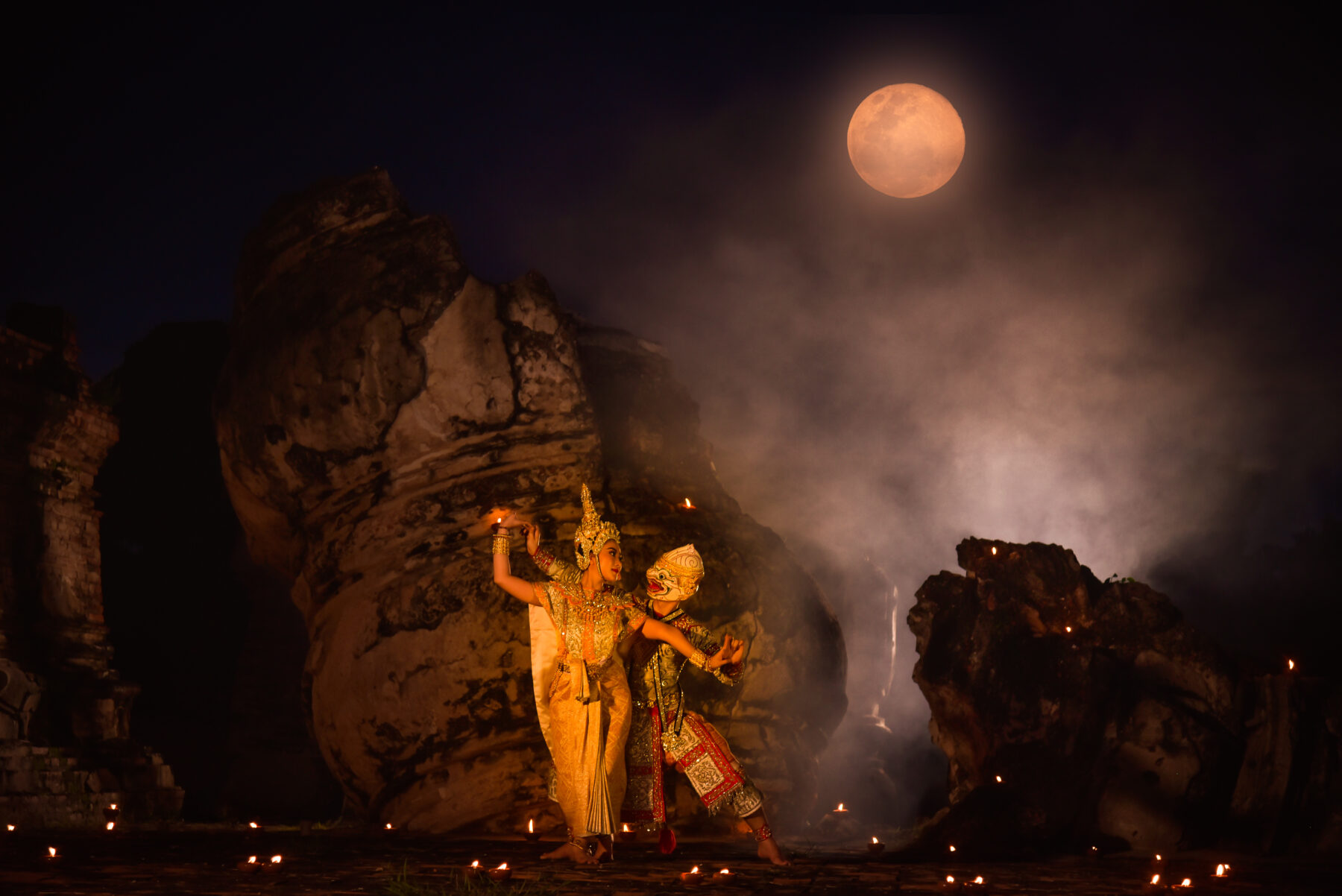 In Malaysian mythology, mermaids are known as duyung, meaning “Lady of the Sea”, which is where dugongs get their name from. Dugongs are marine mammals from the Sirenia order that live in the Indo-West Pacific region. Drawings of the dugong, which are estimated to have been made between 2,000 and 5,000 years ago, are etched inside Malaysia’s Gua Tambum Cave in Ipoh. Some say they were the inspiration behind many sailors’ tales of sirens and mermaids because of their cultural importance and common physical characteristics: they share the same fluke and fusiform body, and don’t have dorsal fins. It was easy to mistake dugongs for mermaids from afar.

Indonesian mermaids are called putri duyung, with putri meaning princess. Indonesians have a strong belief in the legend of the healing power of mermaid tears, and have even created a mermaid oil that is supposed to help people fall in love. Since they can’t find real mermaid tears, they collect the tears of dugongs under special and ritualistic conditions to make the famous and miraculous oil.

Both Malaysian and Indonesian mythologies claim that “their” mermaids originate from the Assyrian goddess Atargatis, who left Syria, crying, after suffering from love. Indonesians claim she swam all the way to their country, while Malaysians believe she went to theirs. 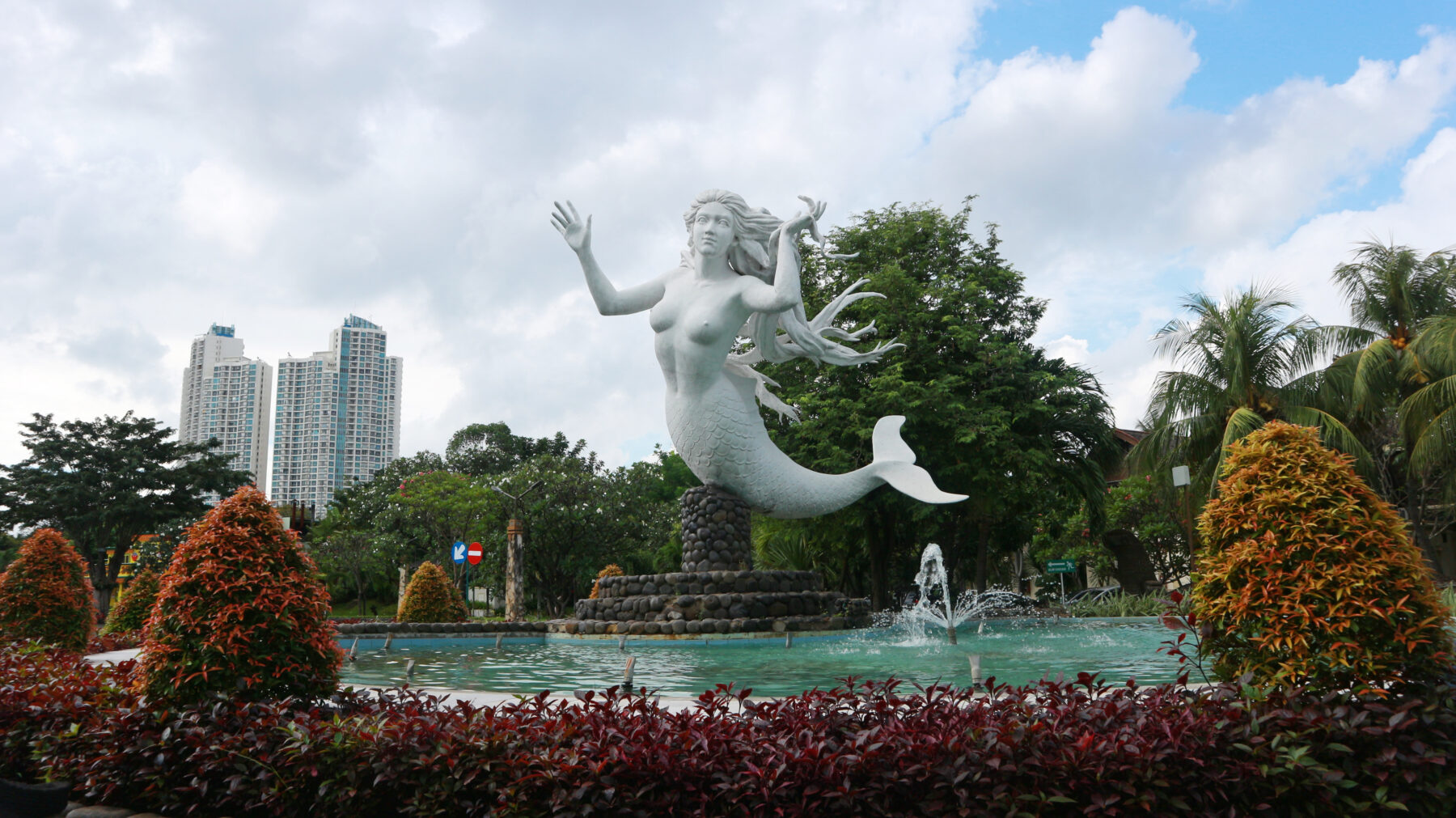 In Phillipine mythology, mermaids are called sirena due to Spanish influence. They have nothing to do with the sirens from Greek mythology, who are portrayed as woman-bird creatures. They are seen as an engkanto – environmental spirits that can appear in human form. Engkantos are one of the Bantay Tubig, the mythical guardians of the water, and are very similar to the beautiful Western mermaids, though they are described to be vicious towards humans together with their male counterpart, siyokoy. While the sirena are beautiful, the siyokoy can appear quite frightening with their gill slits, scaly brown or green skin, and scaled legs with webbed feet, sometimes appearing as a fishtail.

Nowadays, Asia is teeming with films, pictures and books that tell stories about mermaids, more akin to the Western variety. With the growing popularity of mermaids, an influx of mermaid schools and shows have been observed all over the Asian continent. 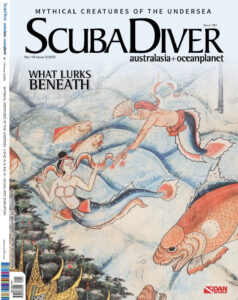 ScubaDiver issue no. 118 dives into all the mysteries of the underwater world and covers where you can not only dive, but dig in to the tasty different cuisines across Asia’s prime dive locations.

A post-pandemic climate for diving is also explored with all our tips and tricks to navigate getting back to the water.

Pick up a copy here 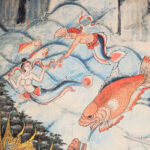