Straight Out of Wonderland

A gateway critter if ever there was one, nudibranchs combine the beauty of our ocean and natural history in a photogenic and scientific symphony like no other. Join Mike Bartwick as he takes an in-depth look (Text by Mike Bartwick. Images by Mike Bartwick & Andrew Wu MingXiong) 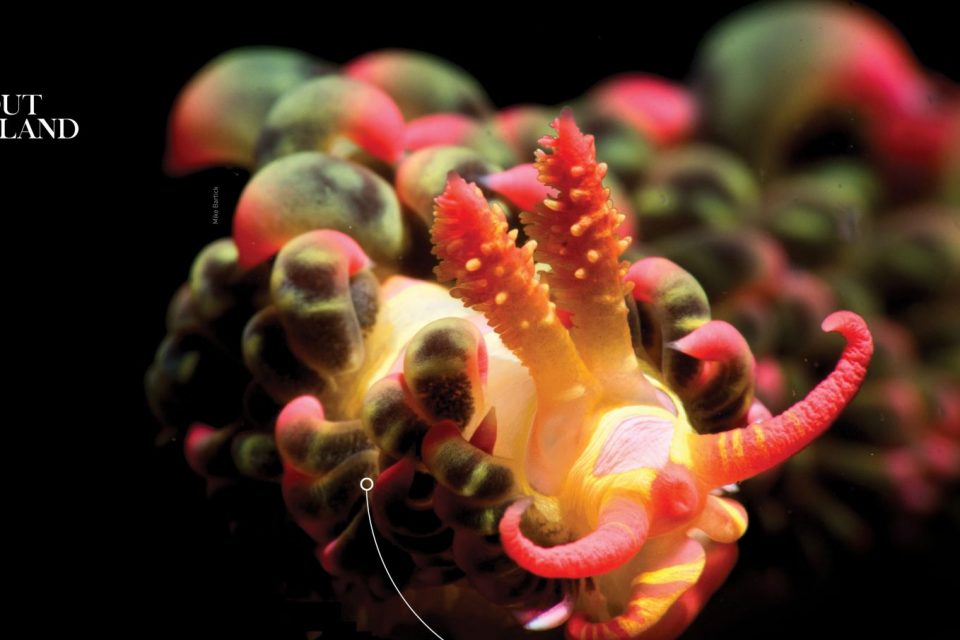 Once these little gems capture your attention, it’s very hard to break their magic spell. A gateway critter if ever there was one, nudibranchs combine the beauty of our ocean and natural history in a photogenic and scientific symphony like no other.

Often referred to as “slugs” due to their evolutionary path, the grand designs of nudibranchs are as fascinating and varied as there are slugs themselves. There are over 3,000 species and each one of them seems to have evolved in a special way to speciate and proliferate in each of the different and challenging habitats in which they are found. Cold water to warm water, benthic or pelagic and at every depth, they occur globally and have even been found in brackish rivers. 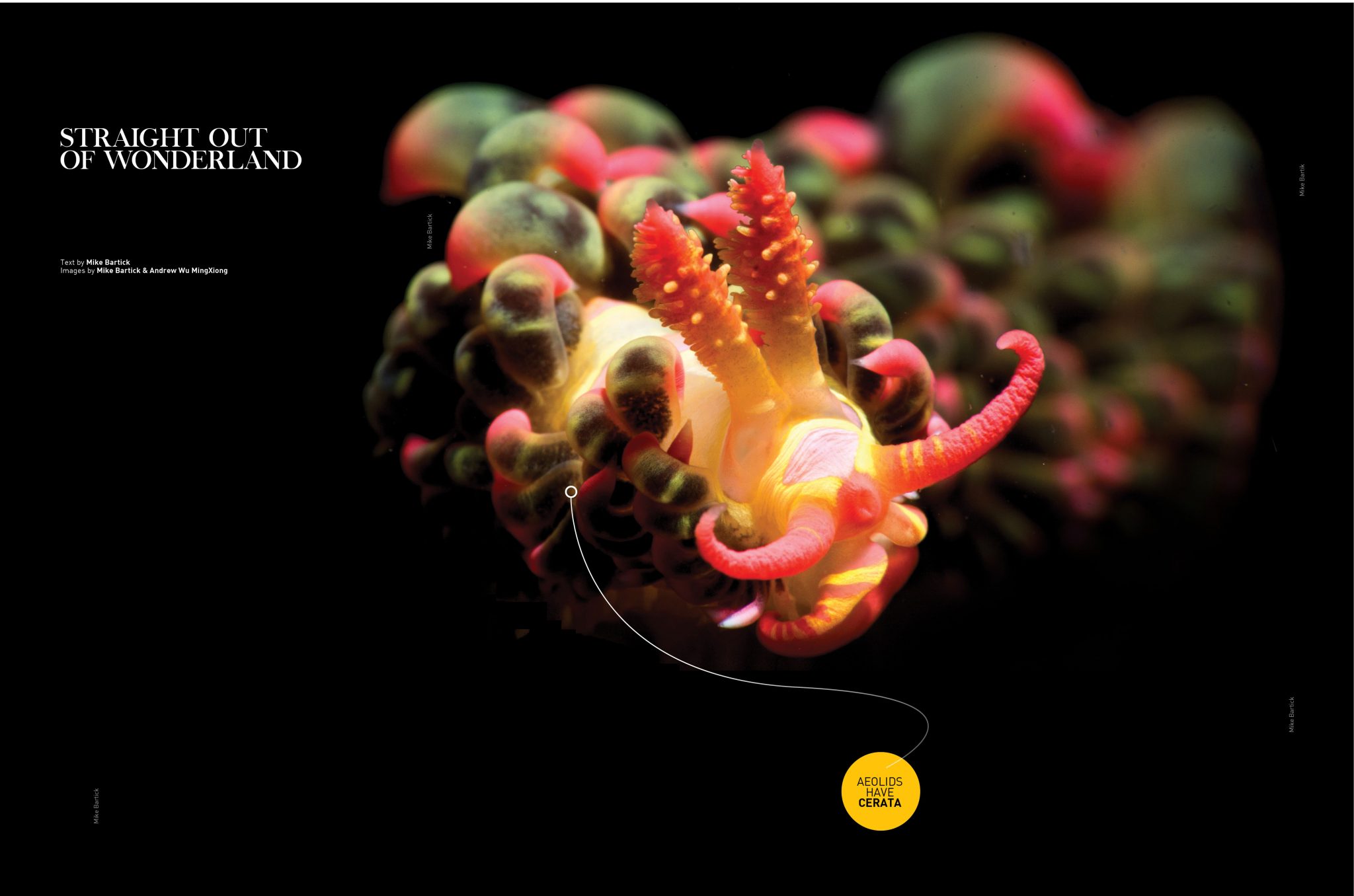 Just as interesting and as detailed as the slugs themselves is the community that they have ensnared along the way. The common thread in the community of “Nudiphiles” seems to be the data list that each and every self-respecting “brancher” develops. This data list becomes a central foundation of why and where a diver will go next, and comparing lists to one another is certainly a point of pride at every meeting.

Nudibranchs are actually Opisthobranchs falling under the gastropod family that feature some wonderfully fascinating anatomical designs, from their appearance down to their physical reproductive organs. 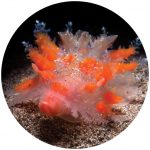 1  Some nudis can acquire stinging cells from the hydroids they eat; hydroids contain delicate, spring-loaded nematocyst cells (like jellyfish). The nematocyst cells are ingested and stored in the slugs’ cerata, forming stinging “body armour”. The sting causes their predators to drown in their own saliva soon after being bitten

2 Apasmatic defensive colours, meaning colours that warn potential predators that they are dangerous to eat

THR TRICK IS TO KEEP BREATHING 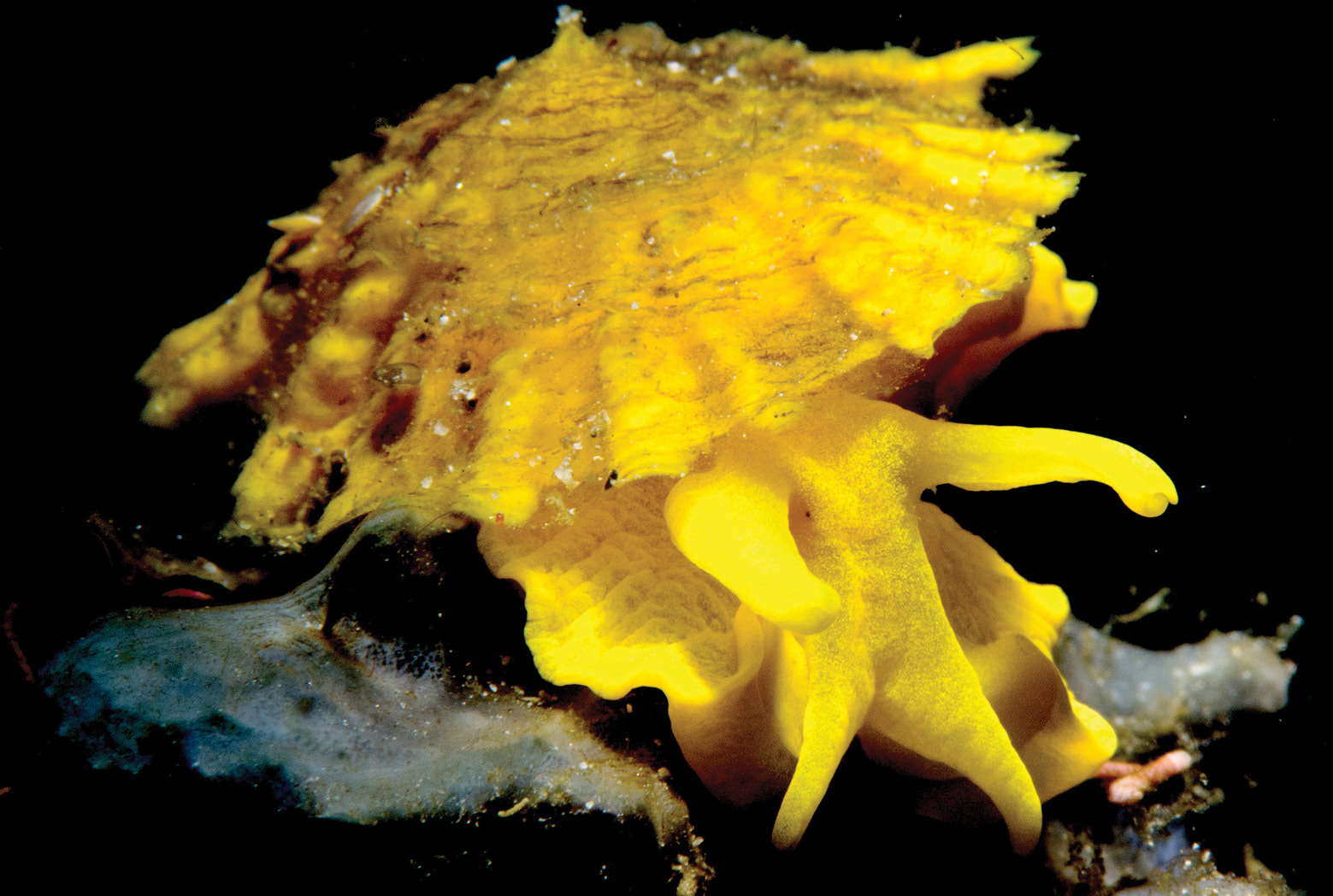 1  The word “NUDIBRANCH” actually breaks down to mean “NAKED GILL”

2  Most nudis have some kind of gill or gill-like structure that is clearly visible. Some are protected and therefore not visible, as in the case of PLEUROBRANCHUS or SIDE-GILL SLUGS (like those found in the mushroom-like crown of the Pleurobranchus pictured above)

3  Their gill makes direct contact with water and enables the slug to respire through conventional gas exchange. CERATA, which also help aeolids to respirate, can be transparent or opaque and in some cases even act as solar panels to assist in a photosynthetic process to create a simple sugar from sunlight. 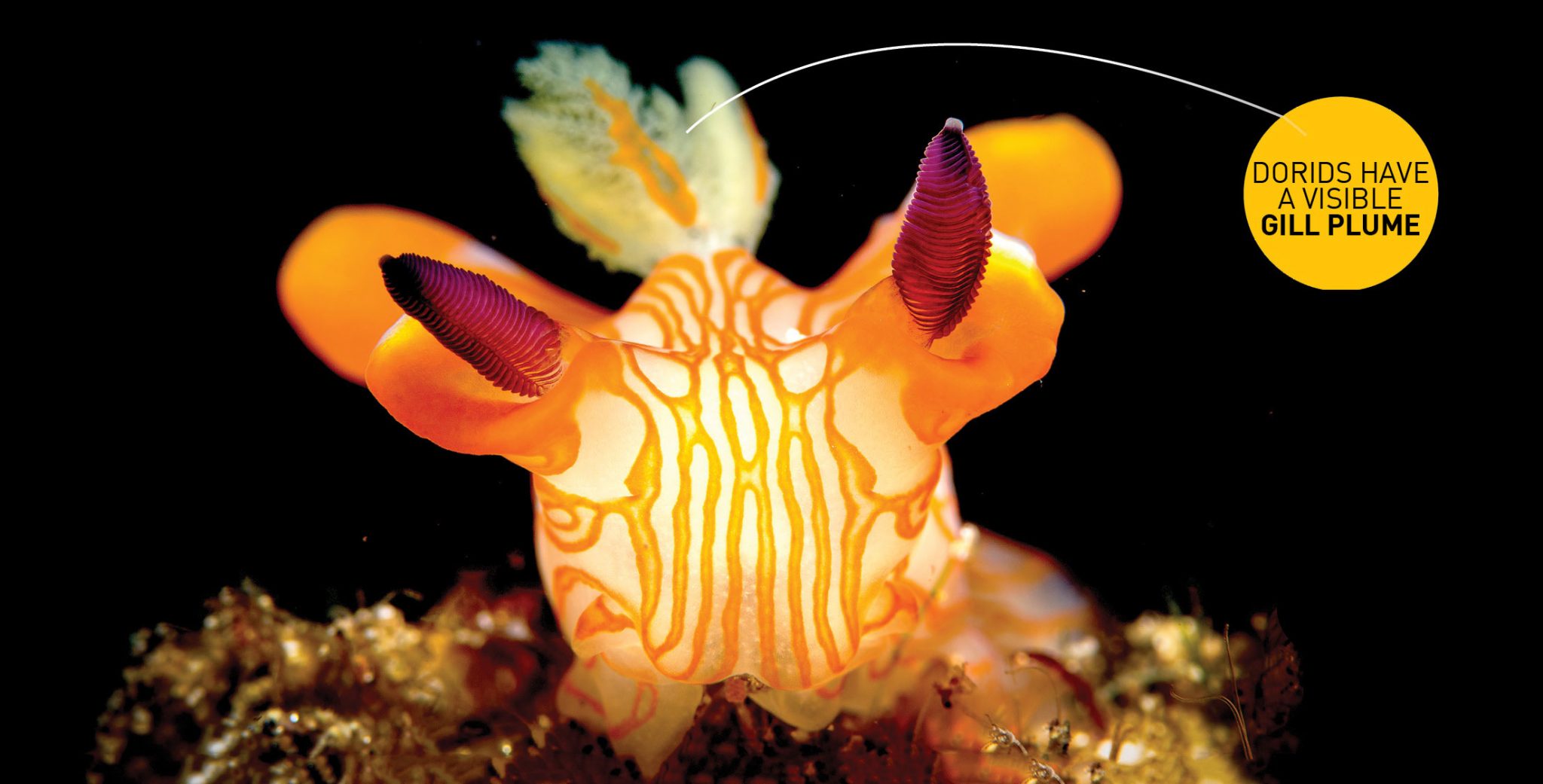 A.  Nudibranchs are hermaphrodites but cannot self reproduce; they will mate with another from the same species

B. The reproductive organ occurs on their right sides

C. Organs look like a docking station and use a hooked medieval weapon-like penis to lock themselves together for successful mating in the worst of conditions

E. The colour of the eggs depends on the type of nudibranch 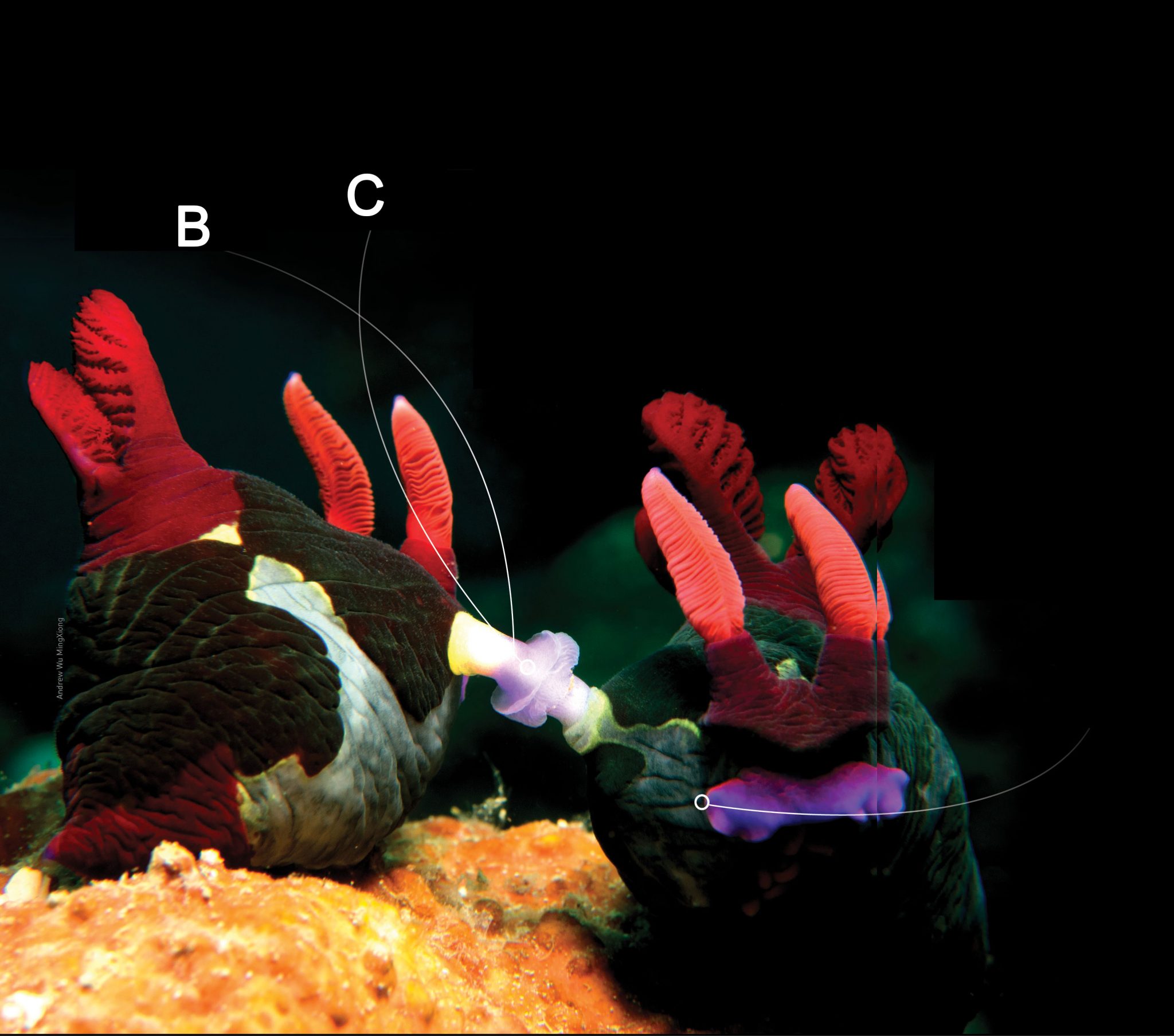 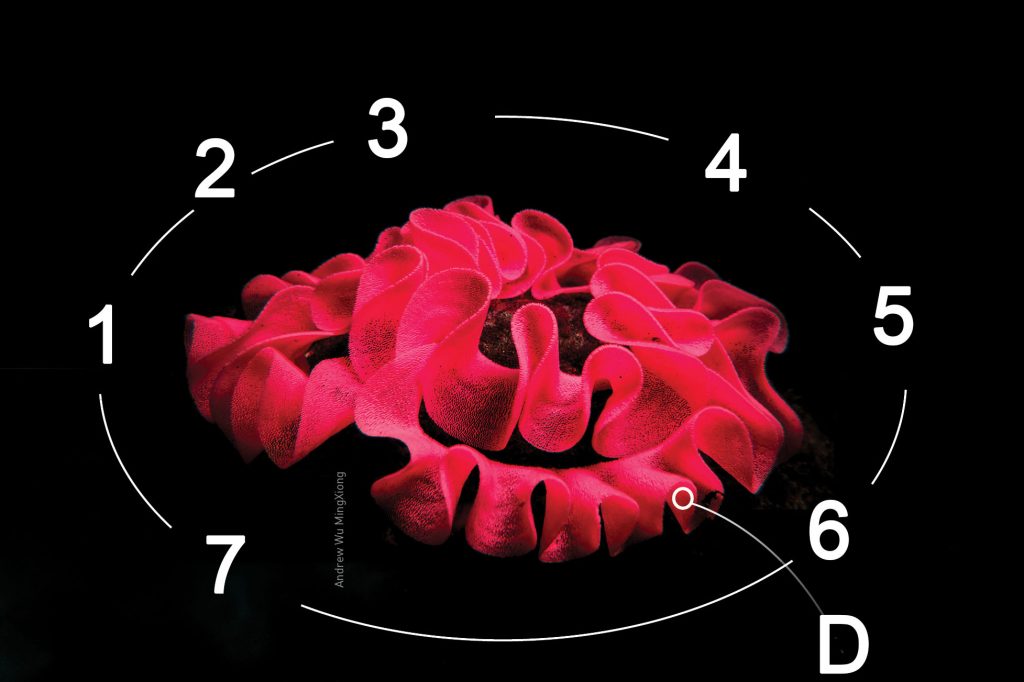 1 Critical mass reproduction: They will reproduce to populate an area to take advantage of all of the available food

2 They lay an egg mass

4 Larvae will eventually settle on the substrate

5 Some slugs only appear once every few years while others are more commonly spotted. The cycle is believed to be related to the food source and larval settling

6 Lifetime varies upon species, from months to a year

7 Nudibranch life spans range from up to a year to only a few weeks. There will be a mass die-off once the food source is gone

Read the rest of this article in Issue 5/2016, AA No.87 of Scuba Diver magazine by subscribing here or check out all of our publications here. 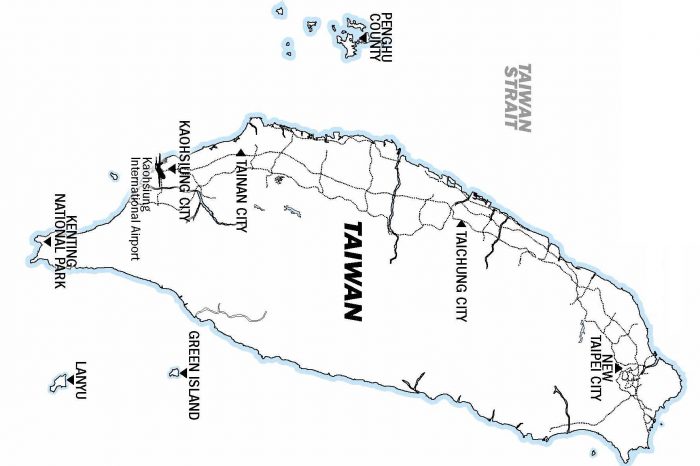 Taiwan: Critters of the East 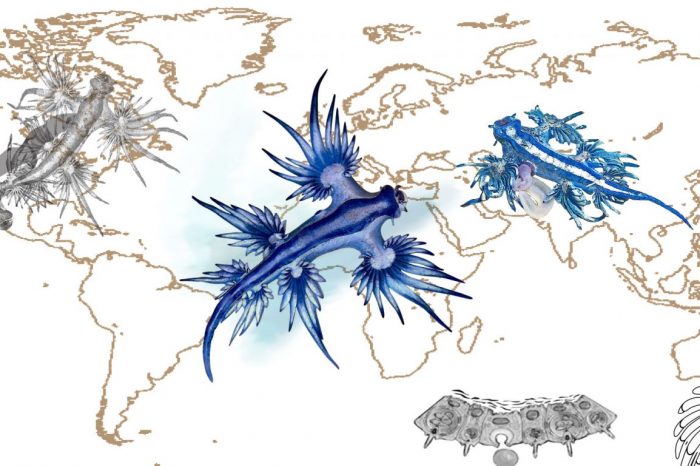 Seven Traits of the Blue Dragon 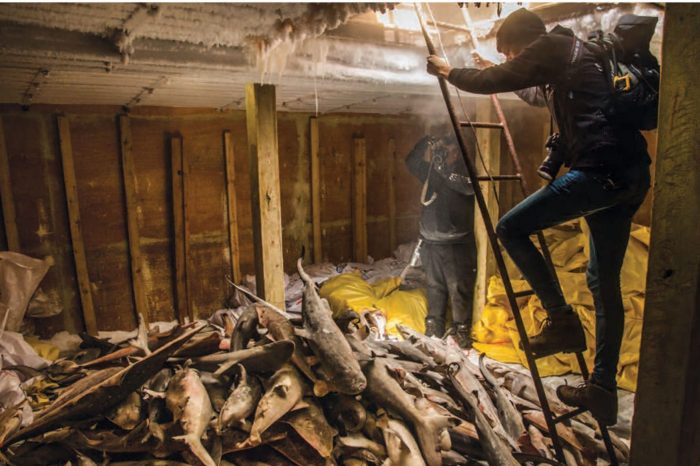 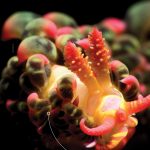 Straight Out of Wonderland