Join Gary Stokes of Sea Shepherd Global as he departs to hunt down an illegal shark poaching fleet after receiving a tip-off regarding illegal fishing boats in East Timor (Text and Images by Gary Stokes, Sea Shepherd) 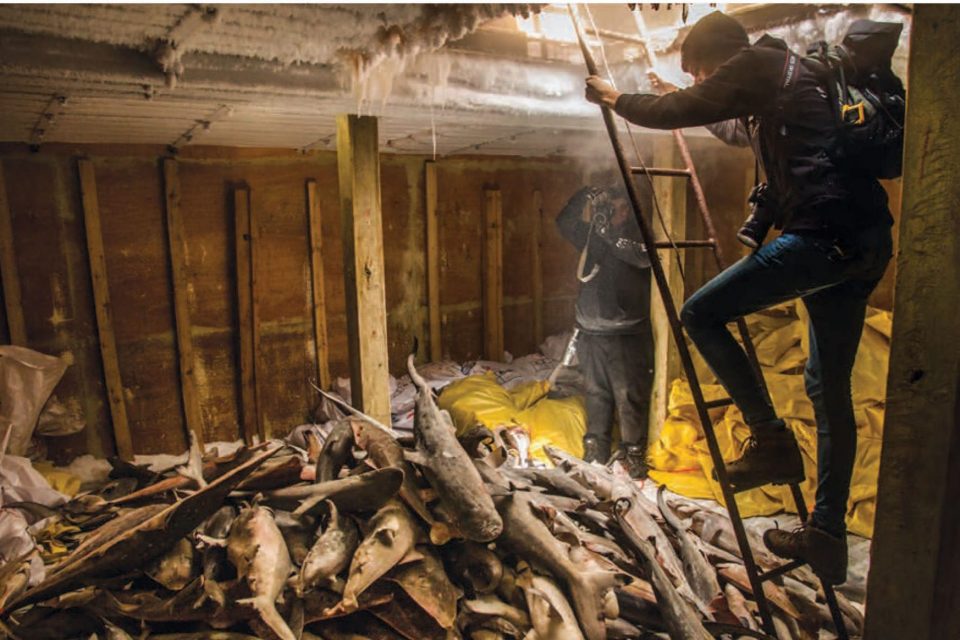 At ADEX Singapore 2017, I was handed some drone footage that showed a trans-shipment of sharks from 15 industrial fishing boats just 200 metres offshore in East Timor. At the same time, I was also given a message that the Nobel Peace Prize winner, Dr Jose Ramos Horta, the former Prime Minister/President of East Timor, was asking if Sea Shepherd could help in the same matter. After reviewing the footage, we began an investigation into the Hong Long fleet that was licenced to fish in East Timor. We tracked and monitored the mothership, which was first going to China to unload then onwards across the Pacific near the Galápagos. Upon seeing the Fu Yuan Yu Leng 999 meeting with several fishing boats, I notified our CEO, Captain Alex Cornellisen, who used to head our operations in Galápagos. Two days later, the ship was arrested inside the Galápagos National Park with 300 tons of shark on-board. The crew were placed in prison and the ship was confiscated.

Our investigation into the 15 vessels operating in East Timor was uncovering a lot of strange anonomlies. The fleet was claimed to be owned by Pingtan Marine Enterprises (PME) listed on the US Nasdaq, yet all signs pointed to them being owned by Hong Long Fisheries based in Fuzhou, China. The case became even more interesting when we discovered that the husband ran one company and the wife ran the other company, and “assets” were switched regularly between them. Also, the fact that the Pingtan fleet had made the news when they were kicked out of Indonesia by Fisheries Minister Ms Susi Pudjiastuti for illegal fishing made them a target of interest.

We devised a plan to send Sea Shepherd’s newest vessel, MV Ocean Warrior, on a recon mission to hunt down the fleet that was operating in waters offshore unseen by the East Timor authorities, who sadly lack the patrol capabilities to police their own waters offshore. Our mission was to find and document the fleets’ activities and share this information with the Timorese authorities in the hopes that they would reconsider issuing a new annual fishing permit to Hong Long.

The MV Ocean Warrior left Freemantle covertly and headed to the waters south of East Timor where we began our search patterns. After two weeks of fruitless searching, we were starting to think that they had already left for China when a target appeared on our radar. Keeping the MV Ocean Warrior over the radar horizon, we launched the small boat just before sunset so that the crew could approach under the cover of darkness.

We found two white Chinese-flagged longline type vessels, the Fu Yuan Yu 836 and 839. These were not our targets, but we proceeded to close in and monitor their activities. They had just set their driftnets – the “curtains of death” – which are indiscrimate killers, capturing anything and everything swimming in the top 12 metres of water. Because of this, the international community passed a law that they are not to exceed 2.5 kilometres in length.

The small boat crew approached the end marker beacon silently and logged its position on the GPS before carefully cruising along the net in complete darkness, being careful not to become its prey by fouling the propellers. This first net was 10.2 kilometres in length and when we got to the end, we noticed another beacon just 50 metres away; this was the start of a second net that we recorded at 11.6 kilometres. These two vessels were setting over 20 kilometres of driftnet each per night, a completely illegal activity which we reported to all relevant authorities.

Returning to the ship, our small boat crew had little time to rest when a new target appeared on the radar. Launching again, we slowly approached and began to stalk the vessel. As I looked through the binoculars at the light configuration, this vessel was different; it was one of the 15 – Bingo! We had found our target. We returned to the MV Ocean Warrior and followed it as it moved off. A few hours later, I was awoken and called to the bridge. There on the radar were all 15 vessels, at anchor above a bank, 150 kilometres south of East Timor in an area disputed between East Timor and Australia due to oil rights.

We closed in and sailed right through the fleet, this time not hiding, while compiling a photo log of each vessel before pulling alongside the Fu Yuan Yu 9608, which was starting to haul in its bottom-set gillnets. We documented the catch coming up which mostly consisted of sharks and broken coral. Besides removing the apex predators, this fleet was destroying the corals on the seabed without a care. We launched the drone to capture more footage to add as evidence later. After hauling their nets, the entire fleet headed north to East Timor, rounding the easternmost point and sheltering in a bay at Com. With evidence in hand, we took the MV Ocean Warrior up to full speed and headed west to the capital of Dili, where we met our onshore contacts and shared the footage with members of the Policia Nationale Timor Leste (PNTL). 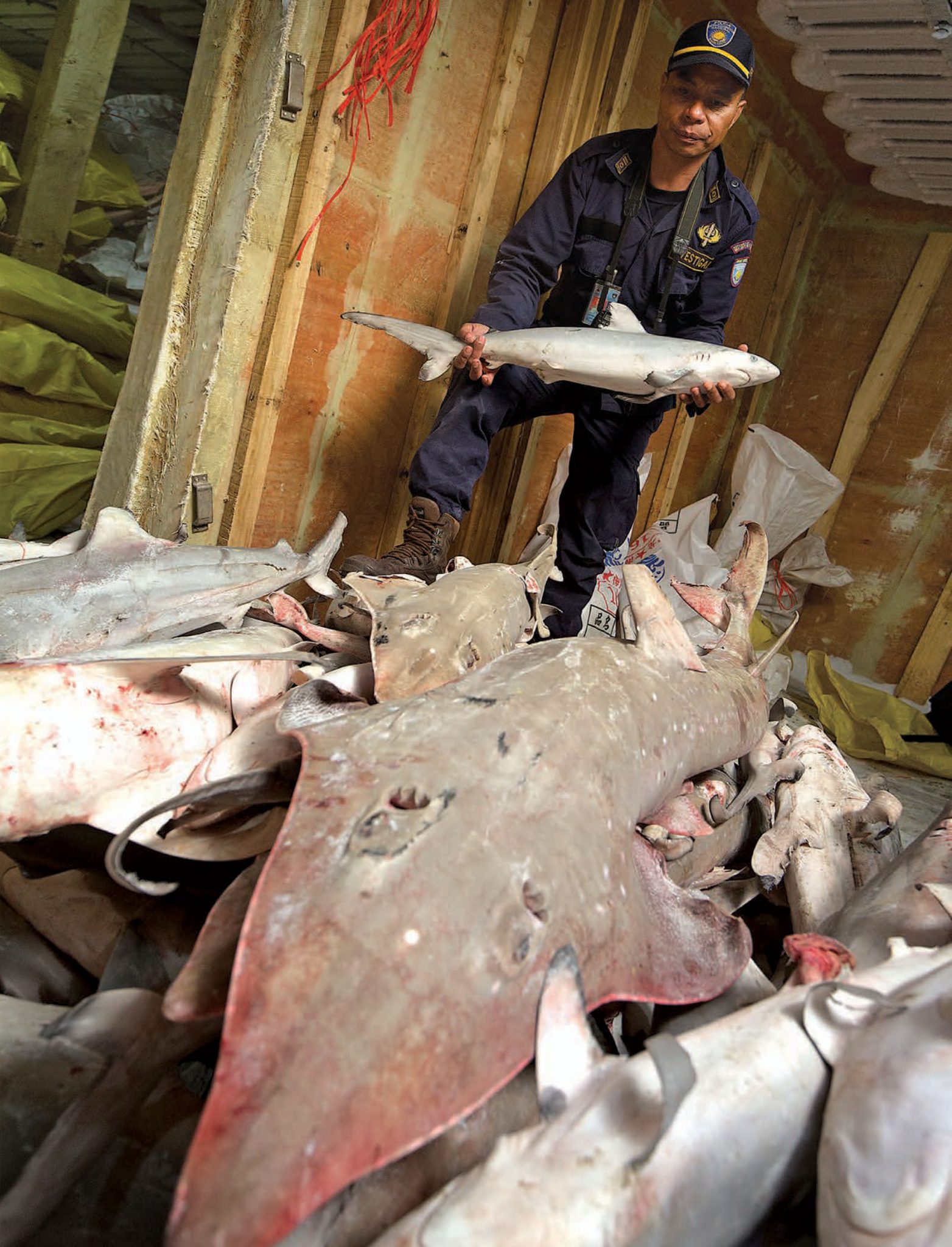 The PNTL were very keen to check out these vessels but had no boats of their own, so we offered to deliver them on the MV Ocean Warrior. A few hours later, we boarded some armed officers and headed off overnight whilst a larger force drove overland to meet us at 6am for a dawn raid. We launched our small boat, again in darkness, and our crew crept silently past the fleet, picking up some PNTL officers on the shore before dropping them off on several of the fishing boats. Once secure, Sea Shepherd crews boarded to assist in searching the holds and documenting the catch, while others went through the documents with the PNTL.

Descending the ladder into the frozen fish hold, we were met with carnage on an industrial scale: Sacks upon sacks of sharks, mostly small or juvenile, were stacked high in both freezers. We made some rough calculations based on numbers per sack and sacks per row and found that each boat had between 10,000 and 15,000 sharks on-board. Speaking with the crew, their last offload had been two months earlier. These numbers blew us away, this fleet had already been fishing for 10 months: How many sharks had they taken? How could there be any left?

That evening, the fleet was left at anchor with only the MV Ocean Warrior standing between them and freedom. We patrolled back and forth, like a guard dog, never anchoring. Around 8pm, one of the vessels started to move. We hit the spotlights and raced towards it, hailing them on the VHF radio in Chinese, “Stop your engines immediately, and anchor!” 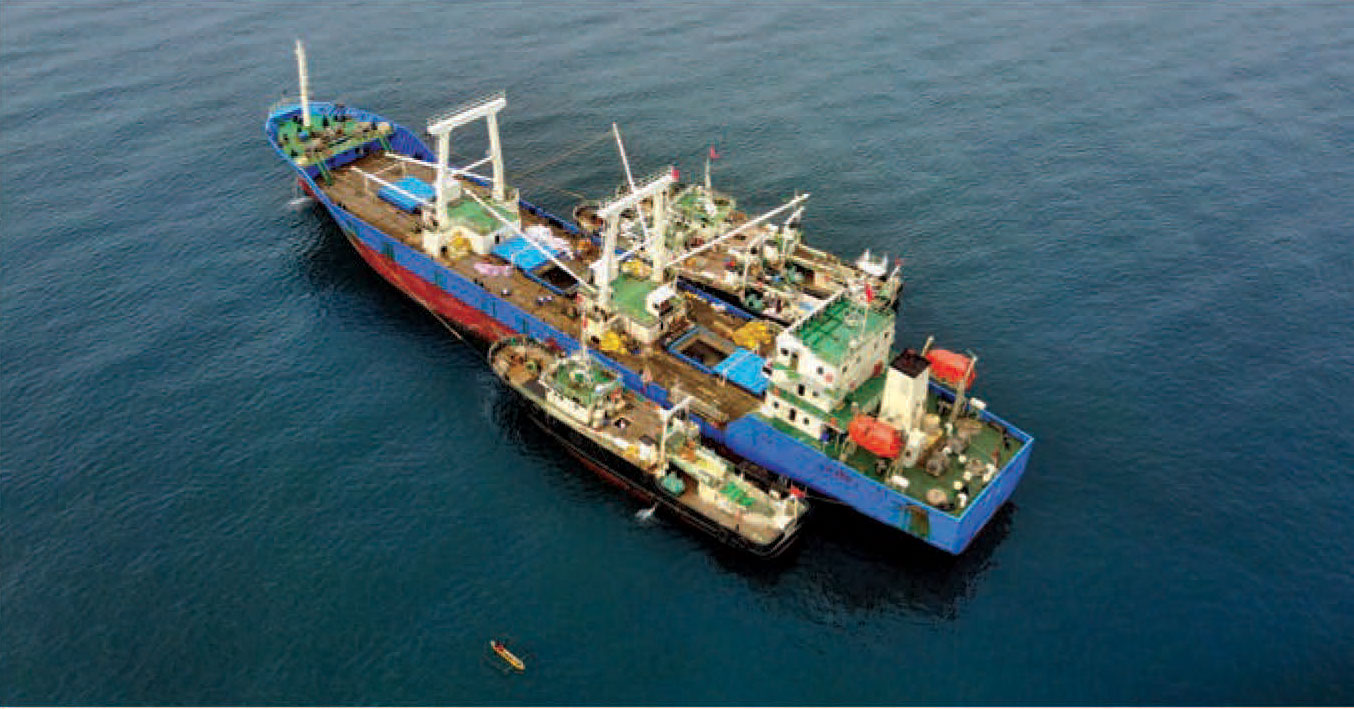 Drone footage of the Fu Yuan (photo by Sea Shepherd)

They complied but something wasn’t quite right; this was a test. An hour later, all of the vessels weighed anchor and started driving randomly around the bay. Again, we hit the spotlights and radio whilst also starting up engine #3. This is one of the Ocean Warrior’s four huge engines that powers the fire fighting water cannon. Once started, I jumped into the aft facing helm seat and fired up the water cannon. The bridge had erupted into a hive of activity, all under the red night light. Captain Mike Dicks had the helm and was manoeuvering the Ocean Warrior towards three of the fishing boats, whilst Jaki, our Chinese translator, was calling them to stop their engines again. As we closed in, we gave them a warning that if they did not stop, they would be fired upon with the water cannon, targeting their communications gear on top of the bridge. The water cannon seemed to be a great persuader as they all stopped immediately.

Like true shepherds of the sea, we then rounded the fleet back up, moving stragglers back in towards the centre before continuing to patrol. We continued to watch over the fleet for 10 days whilst the PNTL awaited the prosecutor to proceed with the case in the courts. When the PNTL finally got approval to move all the vessels to Dili, we departed East Timor bound for Darwin.

Read the rest of this article in 2018 Issue 1 Volume 149 of Scuba Diver magazine by subscribing here or check out all of our publications here. 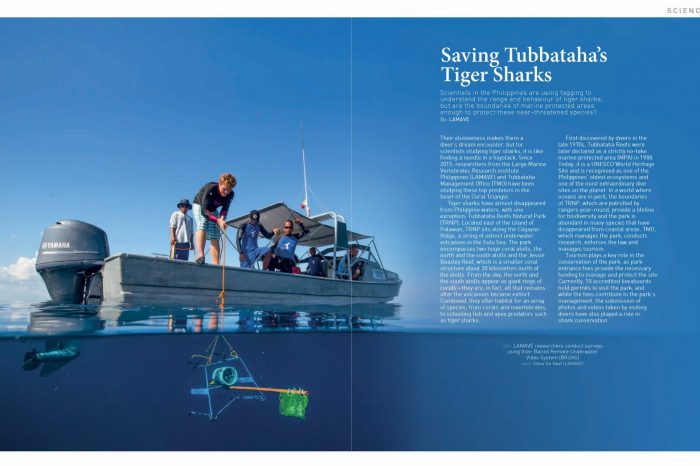 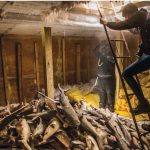