At just 10 metres, I can already see the bottom, more then 50 metres below me. I drop slowly, controlling the on-board computer of my rebreather, keeping the partial pressure of O2 under close surveillance. Suddenly, the ambient light dims and in an instant I am surrounded by hundreds of almaco jack, Seriola rivoliana, that form a tight mass around me.

I continue the descent and reach the top of the rocky reef. Here is a compact school of whirling fish, individuals swirling together in pairs, one dark, and one lighter. These are Pomatomus saltatrix, also known as the marine piranha, anchova, or bluefish; another large predator that usually forms big schools in this dive spot.

I look at the steep slopes of this rocky peak, in the typically intense blue of the Azorean waters. Swimming around the top, at between 50 and 55 metres, I come across some big greater amberjack, Seriola dumerili, some of which are surely more than a metre long, swimming in a powerful formation close by. Some metres away, a clenched school of small red Caprus aper, swim in a synchronised manner, like a cloud of insects, trying to escape to the alternating attacks of some jack.

All is a whirring, writhing, schooling mass of pulsating life of different forms. But already it’s time to start the ascent back up the rope. However, unlike many other dives, even as we start to ascend, this one is far from over. In fact, this excursion to greater depths is completely optional and, for many, of no interest. Why? Because this site’s main attractions are not those schools of powerful predatory fish amassed in the deep – the main draw of this dive is much closer to the surface, so close that sometimes we can see it from the boat.

Devils of the not-so-deep

Great dark masses gently fly through the shallows, so close to the surface that occasionally the tips of their wings break the water, making them look like sharks. These are devil rays, Mobula tarapacana, and, here at the Ambrose seamount, off the Island of Santa Maria, they gather in concentrations of several dozen individuals during the warmer summer months (July–September), when the waters normally reach temperatures of around 25 degrees Celsius.

While I ascend quietly up the rope, three of these large rays, in squadron formation, quietly pass me a short distance away. I quickly evaluate the current and notice it is very weak, so I let go of the cable and wait for them to make another pass, and give me a second photo opportunity.

At Baixa do Ambrósio, Santa Maria island, balls of boarfish seek protection in numbers from predatory jacks and devil rays.

I barely have time to adjust the camera before another small group approach. I try to keep as still as possible, unnoticed thanks to the absence of bubbles from my rebreather. They pass so close to me, and I fire off some shots. Then I look at my computer and see that I am still at more than 30 metres, and I have drifted about 30 metres from the descent line.

Swimming calmly but at a determined speed, I head for the cable. This is not the place to be drifting away from the boat; we are more than three miles from the shore, a group of islands right in the middle of the Atlantic, with strong and unexpected currents and strong surface winds, which can make it very difficult to find a diver adrift.

These islands are the westernmost part of the Portuguese territory, located right in the middle of the Atlantic, on the mid-ocean ridge, where the tops of their seamounts form the nine islands that make up the Azores. These mid-ocean ridges are, of course, a magnet for marine life.

Diving here is always a challenge with a good deal of uncertainty. Even in mid summer, there are days when it is impossible to dive, or a tropical storm rolls in. This location in the middle of the Atlantic, subject to ocean currents and atmospheric air circulation systems, can lead to unexpected surprises, further increasing the sense of adventure.

It may be that over a long period of good weather, with sunshine and no wind, the waves pick up, heaving strongly for no apparent reason. Such conditions may be due to some distant tropical storm on the shores of the US, with the swell travelling hundreds of nautical miles before it dissipates. If that happens, the best option is to spend time reviewing your images on the computer, and getting know the countryside and people of this little corner of Portugal.

Diving between dozens of devil rays is a wonderful experience, possible in the Azores, particularly at Baixa do Ambrósio.

But when the conditions are right, there are underwater marvels to discover. Each island has its main attractions: large dusky groupers, Epinephelus marginatus, more concentrated on Corvo Island; mobulas and whale sharks in Santa Maria; the great arches of lava in Pico; blue sharks off Faial; and shipwrecks in San Miguel. Each island has a good range of dive sites to offer the most demanding and adventurous diver. But nothing is guaranteed.

Some of the species that can be found in the Azores are particularly difficult to find and require many hours of navigation, and journeys of many miles in the RIB. This is the case with the whale sharks, which can sometimes be found off the coast of Santa Maria, when the water temperature rises above 25 or 26 degrees Celsius. They, they are often found in close proximity to beautiful shoals of skipjack tuna.

These Portuguese islands are also visited by more than 20 species of cetaceans, from different species of dolphins to the largest mammal in the world, the blue whale. However, the most emblematic of the Azores, usually associated with the islands of Pico and Faial, is undoubtedly the sperm whale, Physeter macrocephalus. Of course, diving with whales in the Azores is regulated and only possible by freediving or snorkelling, and with a special permit from the regional government. But that’s a story for another time… 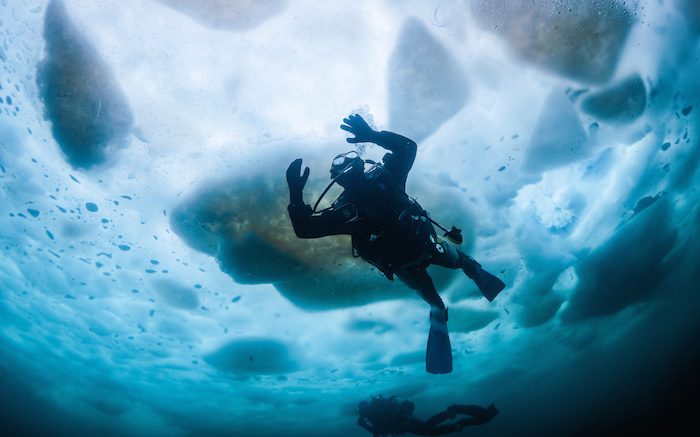