Difference in pressure between the two middle ears can result in disorientation that could be dangerous if not properly managed. (Text by Payal S. Razdan, MPH and Neal W. Pollock, PHD, Images by Stephen Frink and DAN) 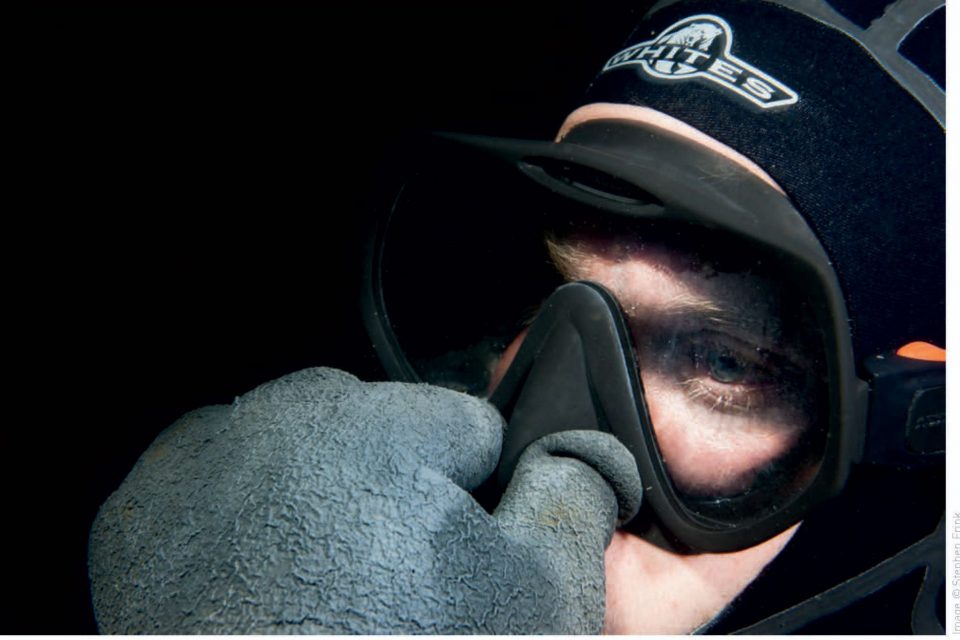 David’s day of diving became marked by frustration after he had trouble equalising during his first dive. He was patient though, eventually reaching a maximum depth of about 27 metres (90 feet). The bottom phase of the dive continued without complications, but while ascending at a normal rate he experienced an onset of acute vertigo and disorientation. He had difficulty managing a safety stop and concluded it prematurely. Fortunately, the symptoms resolved on their own within a few minutes with no other untoward effects. The incident was unsettling; however, as he had never experienced anything like it before, it motivated him to learn more and ready himself in case it happened again.

Learning how to equalise ear pressure is part of every diver’s basic open-water training. Whether one is breathing compressed gas or freediving, changing depth requires equalisation of middle-ear pressure to the ambient (surrounding) pressure. Most divers are able to equalise effectively without major difficulty, employing a variety of techniques, from jaw movement to Valsalva, usually choosing the method that minimises middle-ear stress with the least effort.

Most divers understand that a failure to equalise properly during descent or ascent can produce substantial pain and risk of injury. What many do not realise is that unequal equalisation of the two ears can produce other problems that should be appreciated. This article will focus on one in particular: alternobaric vertigo.

AIR SPACES AND THE BODY

Changes in ambient pressure affect the gas volume of the air spaces within and adjacent to the body. Internal spaces include the lungs, sinuses, middle ears, gastrointestinal tract and possibly the teeth. Adjacent spaces include the mask, drysuit and sometimes the outer ear.

Some equalisation occurs automatically for healthy divers under normal conditions: The gas volumes in the lungs and sinuses equalise during breathing, the gastrointestinal system can generally accommodate gas pressure changes, and teeth, fortunately, rarely have closed gas cavities. The gas volume in drysuits and masks is easily adjusted with auto-inflate and exhaust mechanisms and by exhaling through the nose, respectively. Gas in the ear canal under a tight hood can be eliminated by briefly pulling away the hood to allow water to displace the air.

The purpose of pressure-equalising techniques is to open up the auditory tube (Eustachian tube), a duct that connects the back of the throat (nasopharynx) to the middle ear (Figure 1). The auditory tube allows gas to pass between these two spaces, balancing the pressure. On the surface, where ambient pressure changes are small, equalisation of the middle ear and the ambient pressure occurs naturally – when we yawn, swallow, laugh or chew, for example. 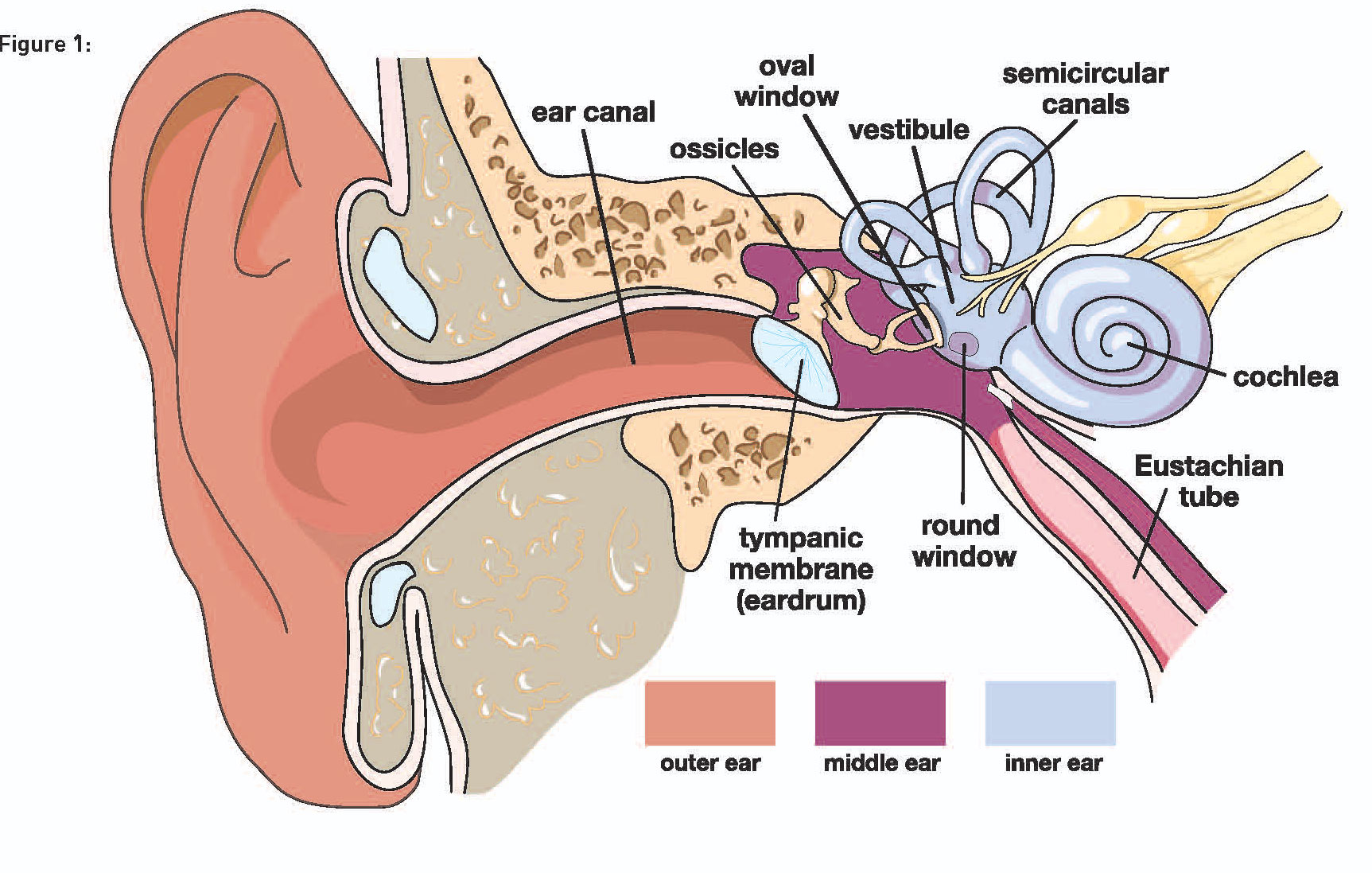 Equalisation of middle-ear pressure is essential to avoid damage to structures involved with hearing and balance. Functionally, sound waves (pressure waves) make their way through the outer ear canal and across the tympanic membrane (eardrum). The eardrum translates the waves into vibrations, which then pass through three small bones in the middle ear (the malleus, incus and stapes) into the inner ear.

The stapes transfers the vibrations from the middle ear through the oval window into the fluid-filled spaces of the inner ear. The oval window acts as a direct line of communication to the cochlea (sensory organ for hearing), which translates pressure stimuli into sound. However, changes in pressure can also stimulate the fluid-filled semicircular canals of the vestibular system, which interprets head motion and orientation for balance. The inner ear is separated from the middle ear only by two delicate membranes: the oval and round windows.

The right and left cochlea can receive different sound stimuli, allowing for source localisation (distance and direction). Balance sensing is based on coordination of the semicircular canals between the two ears. Mismatched stimulation of the vestibular system is problematic. If the difference results from a pressure imbalance, a condition known as alternobaric vertigo can result.

Alternobaric vertigo (AV) is a highly descriptive term coined by Dr. Claes Lundgren in 1965.(3) “Alter” means “another”, “bar” means “pressure”, “ic” means “the condition of”, and vertigo is the perception that the body or its surroundings are spinning or moving. AV arises from unequal pressure between the two middle ears, usually because the pressures are changing at different rates. Failure to equalise pressure symmetrically can cause the brain to erroneously perceive the difference as movement.

Symptoms can range from mild to severe but are typically transient, subsiding within seconds or a few minutes as pressure equilibrates. Nystagmus (involuntary rhythmic movement of the eyes) can also occur, as can nausea and vomiting in severe cases. In addition to visual disturbances, AV events may be accompanied by the feeling of fullness, tinnitus (ringing in the ears) and muffled hearing in one or both ears. Some divers may notice a hissing or squeaking sound, indicating poor equalisation, prior to the onset of AV. Women appear to have a greater susceptibility to the condition than men.(1,2)

The challenge for divers experiencing symptoms for the first time is to avoid actions that may worsen the situation. Maintaining control and a stationary position will allow the symptoms of AV to resolve naturally, with minimal risk of complication. Persistent symptoms may indicate a more serious condition (see sidebar on next page). An isolated incident of AV does not necessarily indicate future risk or more acute health concerns. Divers experiencing AV repeatedly, however, should seek medical evaluation.

REDUCING THE RISK OF AV

Effective equalisation (early, often and with the most appropriate technique for the person) and not diving when congested are simple ways to reduce the likelihood of AV. The need to exert high pressures to equalise during descent can make equalisation during ascent, which is usually a passive process, more difficult. The impact can be substantial if the soft tissues have been made swollen by overly aggressive or poorly conducted equalisation manoeuvres. If properly conducted equalisation manoeuvres fail, one should abort the dive and evaluate the situation before trying to dive later.

Some divers find it easier to equalise in a head-up position. Performing gentle, active equalisation techniques early and often during descent will help to reduce stress on ear structures. Divers that encounter frequent AV should re-evaluate their equalising techniques and possibly their buoyancy control – after being cleared to dive following medical evaluation.

Any condition that can cause inflammation and congestion of the ears and sinuses could increase the likelihood of equalisation problems such as AV. Individuals choosing to dive despite symptoms of congestion or illness may be putting themselves at risk. Diving with congestion could also lead to reverse block, a condition where gas becomes trapped in the middle ear. A diver might manage reverse block by descending slightly and then reattempting a slower ascent. If this fails to work, however, the diver will have little choice but to risk more serious injury while continuing the ascent as slowly as possible for the circumstances. Ample gas supplies and conservative dive profiles will give the diver additional time to deal with any equalisation issues that might arise upon ascent.

Some divers may choose to rely on nasal decongestants as a solution for diving with congestion. Decongestants relieve symptoms temporarily, but they can mask issues. Using decongestants for four or five days may result in rebound congestion, making it more difficult to equalise.

Read the rest of this article in Issue 1/2016, AA No. 85 of Scuba Diver magazine by subscribing here or check out all of our publications here. 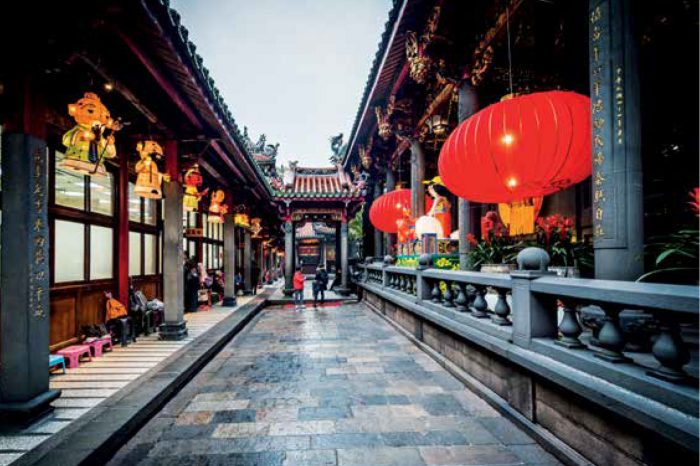 Asia At Its Best: Taiwan 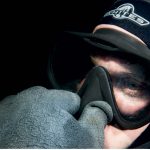