Andrew is a long time diver, photographer and writer. Originally from the USA, he found the ocean and diving almost 20 years ago while working in the world of financial derivatives. His work had comparatively little on the enthusiasm for the underwater that he had discovered. After a move to Guam, he devoted himself full-time to the ocean, helping many new divers fall in love with the water while working as an instructor and underwater photographer. After much encouragement from his friends and students, he took another step. He decided to commit all his energies to taking and sharing his images and writing about diving. Andrew has taken numerous awards and has has finished first place in major competitions for his photography and art – both above and below the waves. His writing and photos have appeared in major magazines across the world, and he will soon be launching a new series of books. He is currently living in Beijing with his awesome wife Dalice and their two daughters Elly and EJ “Doomy”.

I was an amateur photographer when I got certified, so carrying that hobby with me beneath the waves was a natural next step. The decision to do it professionally was driven by the encouragement of my students when I was a dive instructor.  Looks like they were right!

On my Open Water dive number four, but don’t tell my instructor! I brought a film (!) camera with me on that dive in the kelp forests of Santa Catalina Island in California.

That shot was in Anilao, Philippines. I was looking for ornate ghost pipefish and found three on the last dive of the day, but when I setup the shot my camera battery died! The next evening after a couple dives I decided to head back to the same spot and just see if they were still there, which they never are. In this case they were, and there were seven of them! I spent an hour shooting them and got very lucky when one grabbed a small goby to eat. Best shot I’ve ever taken!

Chuuk in the Federated States of Micronesia, hands down. I’m a hard core historian and wreck diver, and Chuuk/Truk is the greatest underwater museum there is.

Bikini Atoll for the amazing historic ships there. It may not have the number of ships of Chuuk, and nor were they sunk in battle, but the ships that are there are without equal. Diving the USS Saratoga and IJN Nagato are my personal Mount Everest.

Besides my wife? Joking of course. That would have to be the bones of the crewmen who were killed in the holds of the Aikoku Maru in Truk Lagoon. Deep inside that wreck there are still a huge amount of remains, all from men killed doing their duty in combat.

I shoot an Olympus EM1 with a wide variety of lenses inside a Nauticam Housing. My strobes are Sea & Sea YSD1’s and I also use a large number of independent video lights for some of my setup shots.

Teaching my oldest daughter her Open Water certification. It may not be photography, but I am still a teacher at heart. From a professional point of view, I would have to say that having the cover shot on Chinese National Geographic was a nice boost to the old ego.

When I shoot inside wrecks I am regularly pretty deep and usually solo to minimise silt.  I often leave my second camera and ascent tanks outside where I am shooting as it is just too much gear to bring inside. On one dive I left my gear outside and after I finished shooting I emerged to find my second camera and ascent tank gone! Luckily I had the air to make my decompression stops, but I was still really mad. I had thought I was the only person on the wreck, but it turns out another boat had arrived. They had seen my gear and taken it, thinking I had dropped it. They were very happy to return it to me when I surfaced! Their heart was in the right place, even though it almost sent me to the chamber.

Get good lights and when you have them then go get more! Light is the ultimate factor in making an underwater shot. My ancient first generation digital camera can still shoot better pictures with good lighting than the most expensive DSLR can with poor lights. Spend your initial money on buying good lights and plenty of them. You can always use your lights on all your future cameras, the reverse does not hold true if your priority is quality pictures.

A selfie of myself in front of the guns on the IJN Nagato in Bikini Atoll. I hate selfies, but think that would be worth my pride. 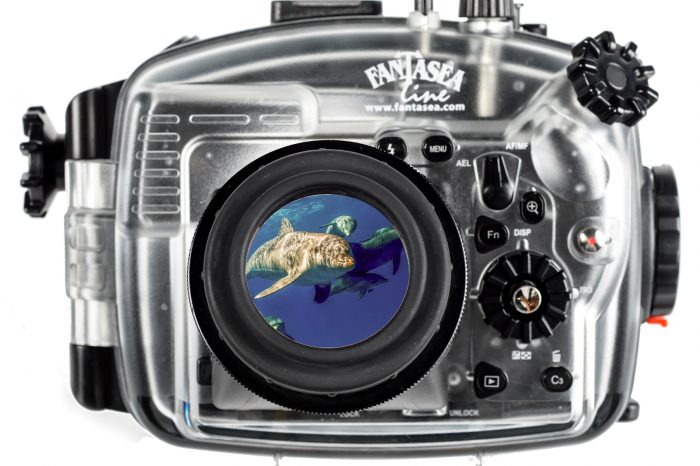