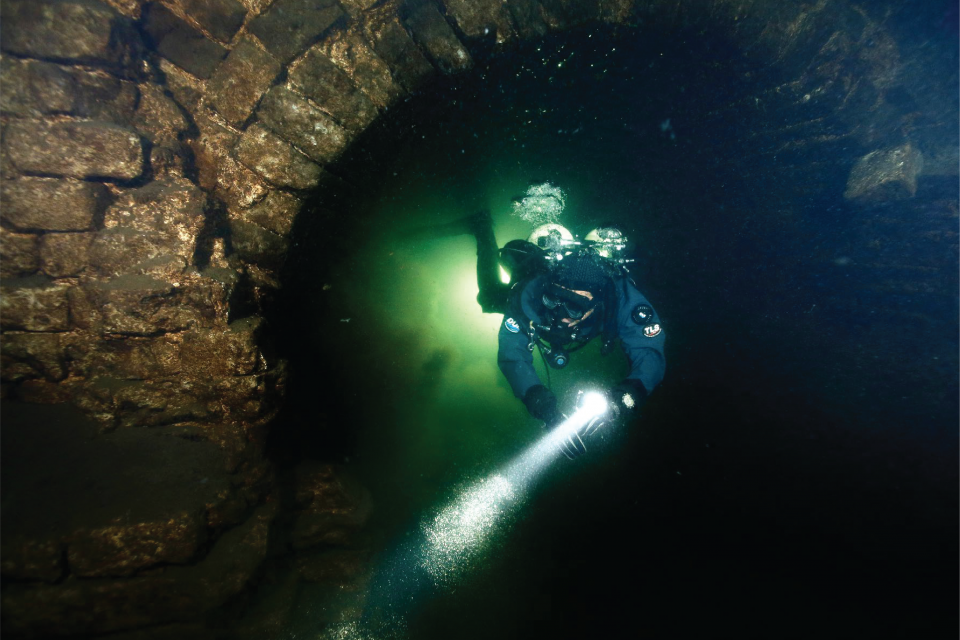 Between perpetual darkness and the “deep blue sea”

Panjiakou, a submerged ancient city gate running along the Great Wall, is a hard place to be: looking for the right entry point demands intricate knowledge of the silty dive site, whose view in the summer is constantly obscured by an abundance of lush microalgae.

Thinking about it in the cold light of day, diving this location was indeed fraught with a high level of “surprise” – definitely a euphemism for “difficulty” – except the deeper you go, the clearer your objective becomes. Before Wu and his team plunged below the surface, they had to reference several photographs in order to navigate a safe spot to descend, given the unstable water depths found throughout the year.

Located approximately two hours away from Beijing, this iconic structure stood for hundreds of years by the Luan river (滦河) in Qianxi county, Hebei province, until 1977, when the river was dammed and part of the wall became submerged beneath the newly formed Panjiakou Reservoir. This body of water then overran two gateways of the Great Wall – one known as Panjiakou (潘家口) and the other Xifengkou (喜峰口) – earning the dive site dual names. Today, it is more commonly referred to as the Underwater Great Wall.

It blows divers’ minds to know there is a section of this famed landmark that is accessible only with scuba gear. Panjiakou lies underwater, and the wall rises again high up into the mountains opposite before dipping again dramatically at Xifengkou. Between them lie straight-line distance of more than 10 kilometres, yet down below, this stretch is greatly contracted. Plunging through the surface, Wu and his team carefully followed the length of the wall, inching closer to the Southern Gate of Panjiakou where they encountered the first beacon, really a turn in the section, christened ba lou, literally meaning “eighth floor”.

An aerial view of Panjiakou Village in 1977: The first beacon, known as ba lou or “eighth floor”, lies nearest to the dive site’s entry point while the “first floor”, located near Panjiakou’s Southern Gate, lies at maximum depth.

There are eight “levels” in all to explore – the first and the last having a 30-metre disparity in terms of depth. But this is not the only factor that’s constantly unstable, as Wu attests. Temperature fluctuations are vicious here; even during the summer, at seven metres deep, it’s about 10 to 11°C. Venture to 20 metres and it plummets to just 3 to 5°C. Such conditions make it imperative for divers to don a drysuit, never mind that they’ll be sweating buckets before descending. A cold-water regulator as well as a double tank is also mandatory. As this is a difficult dive where participants reach a maximum depth of 25 to 27 metres, a minimum of 100 to 200 dives for recreational divers is required prior to attempting the Underwater Great Wall. 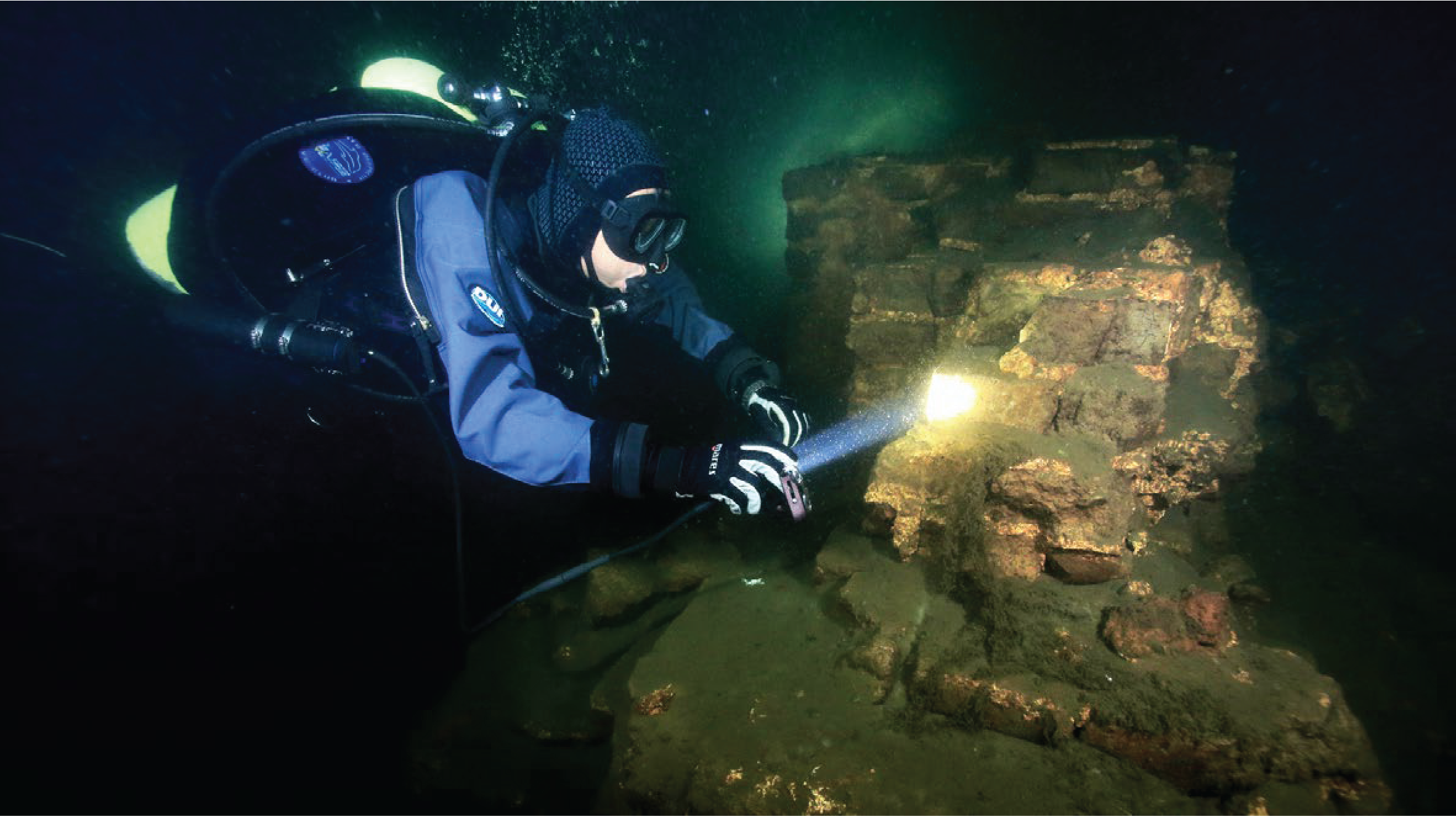 Divers observe in detail the structure of the first beacon – also known as the “eighth floor” – a section that has remained considerably intact.

Why the technical demand, one may ask, given that currents are tame and buoyancy is unlikely to be an issue. Here’s another catch: The city gates beneath are cloaked in almost complete darkness, demanding the use of a powerful dive torch with a small beam angle, suitable for identifying distant targets. At seven metres, the water only affords visibility of three metres while at 20 metres, an abject lack of light penetration is guaranteed to accost the diver. Visibility at this depth, though, increases to between five and six metres. Resembling a night dive, one can expect stunning sightings of old artefacts, remnants of an ancestral home, as well as elegant architecture characterised by impressive stonework that has endured the test of time. One should also not overlook the appearance of precious wildlife – small freshwater fish found near the surface as well as benthic shrimps that are unique to the reservoir environment. 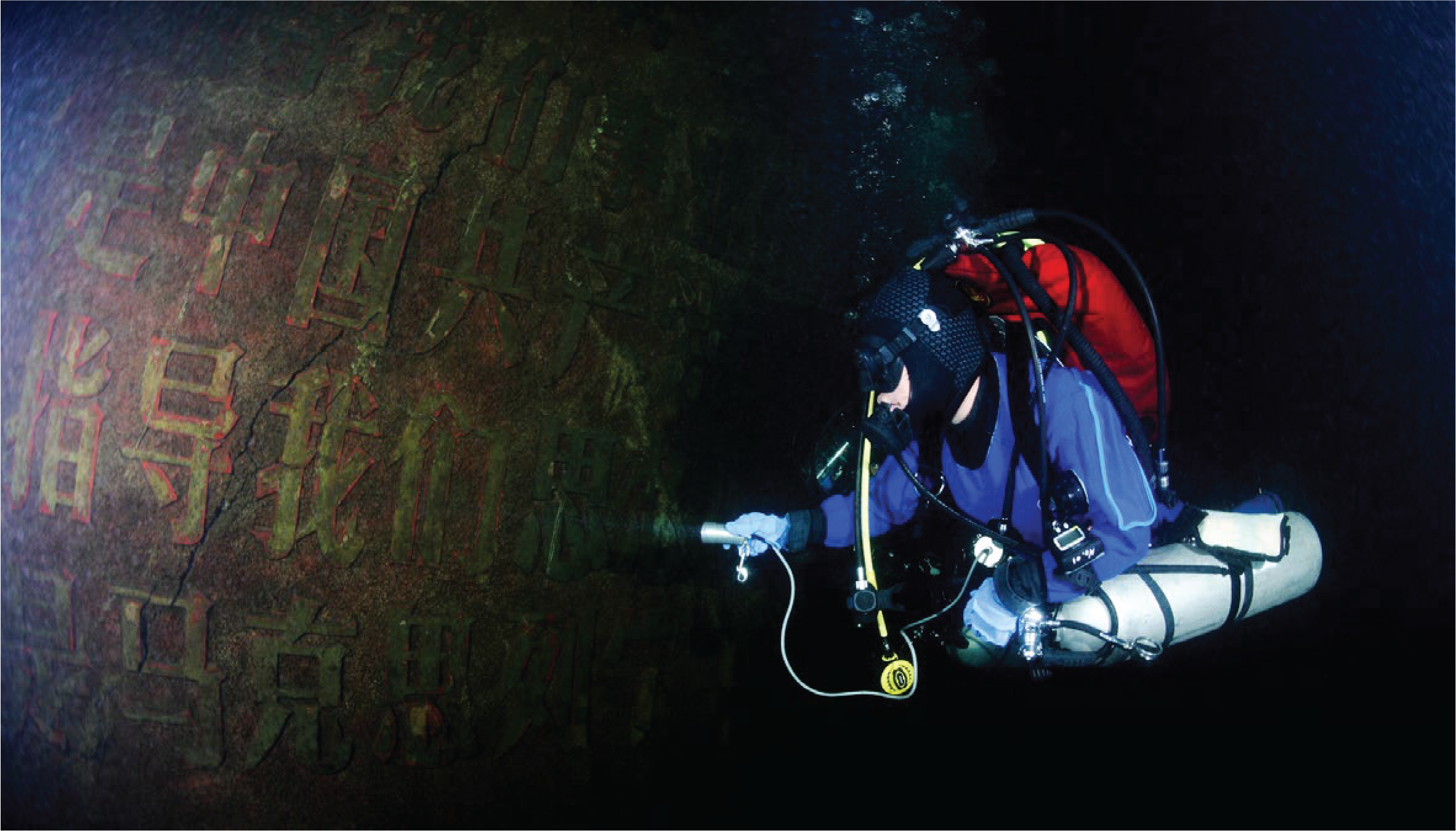 1970s: Next to a highway that was deluged along with the great wall hangs a cement signboard featuring Chairman Mao’s famous quotations. The red paint and white wordings remain clearly visible.

While the Great Wall is titled one of the seven of the wonders of the world above the surface, it is nothing short of a miraculous time capsule down in the soupy green as well. Steeped in history, its hulk of bricks seems trapped in time as you drift above the parapets, hovering in between beacons. Diving it in a dark algal haze, Wu hardly thought of this site as a mirror image to the scenery above. Instead, the dead silence impelled him to contemplate the simple lives of villagers living there just decades ago.

Revisiting the past through a medium that offers a bizarrely microscopic perspective, divers notice every tiny detail when the flashlights are on, with the mortar between the bricks shining like fascinating slivers of reflective white. With every fin kick, the imagination conjures up the generals and soldiers that perhaps once marched past one city gate and then the other in spectacular unison. But Wu warns divers not to get too distracted. Danger looms at Panjiakou in the form of inconspicuous fishing nets. Thus, it’s a must to have a small dive knife, preferably fixed at the harness and a titanium line cutter fixed at the shoulder, to tackle any tangled netting. 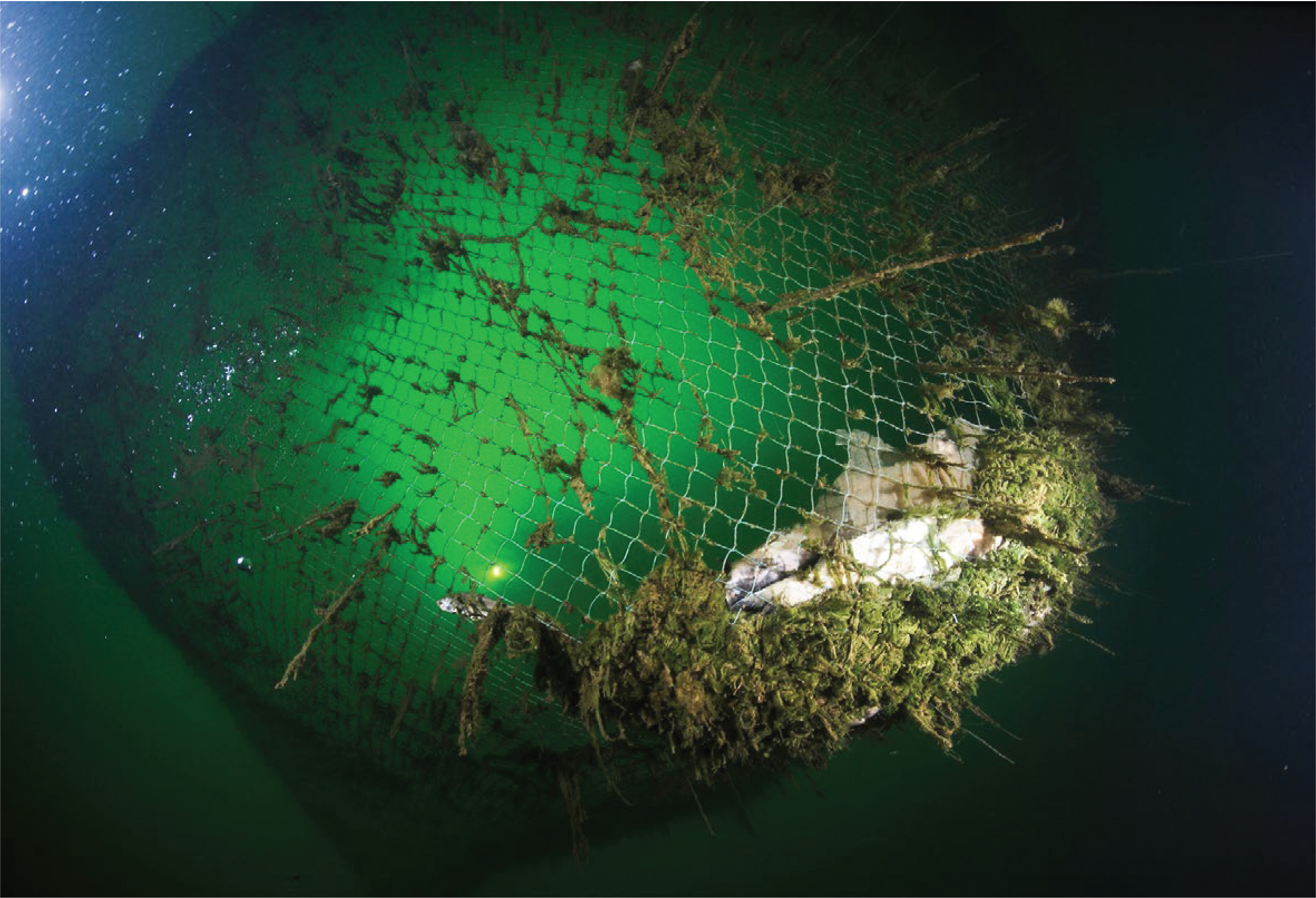 Residents living in the vicinity of the reservoir engage in cage culture, constructing cages or baskets to cultivate freshwater fish, in particular carp, grass carp and silver carp. Hovering below these cages is a very dangerous thing to do as the diver risks getting tangled up in those nets.

An immersion like no other, diving the Underwater Great Wall reveals centuries of secrets – paralleling a journey marked by opulence and warfare, from the Qin, Han and Ming dynasties through to modern times – surely too much to absorb on a single dive. Just think of it as a refreshing sluice and get ready to savour this clandestine bit of Asian aquatic heaven.

Asian Diver’s Field Editor (China) WU LIXIN is a tek diver and professional underwater photographer who has many accolades to his name, such as the Silver award for macro photography at the 11th World Underwater Photography Championships. Besides being an avid underwater explorer, Wu is also a member of the China Artistic Photography Academy. 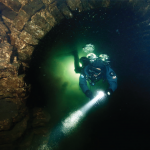