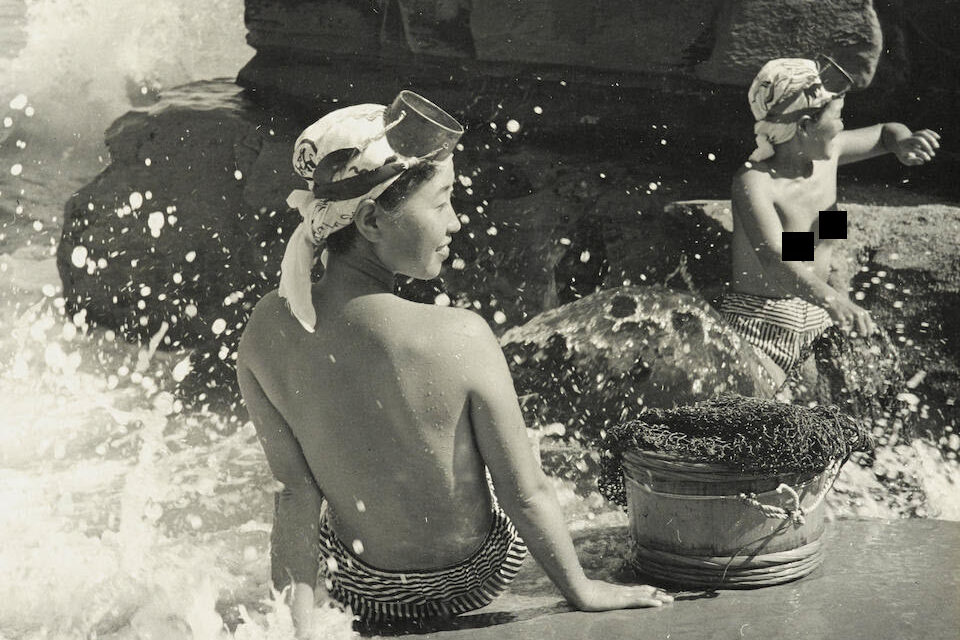 Ama pearl divers represent one of Japan’s less-known and yet fascinating cultures. Ama (海女 in Japanese), literally translates to ‘woman of the sea’ and has been recorded as far back as 750 in the oldest Japanese poetry collection, the Man’yoshu.

These women specialised in freediving at depths of some astonishing 30 feet down into cold water wearing nothing more than a loincloth. Utilising special techniques to hold their breath for up to 2 minutes at a time, they would work for up to 4 hours a day in order to gather abalone, seaweed, and other shellfish. Diving for pearls, however, is their most lucrative endeavor. Finding one nestled in an oyster is an added bonus when carrying out their ancestral practices of collecting shellfish.

Why are they women?

As the first generation of ama emerged, male Ama from Tsushima became netters and harpooners. When these male Ama joined the whaling fleets and the boat-fishing fleets, male Ama numbers shrank, and the predominance of female Ama grew.

In Japan, it is believed that women make better divers as they had extra layers of fat to protect them from the cold water and are therefore able to swim and collect more catch. Agile, small-framed divers were required in the deeper water in the north. Hence, female Ama, were perfectly suited for this role. On the other hand, male Ama would wait on the boats to pull the female Ama back to the surface along with their heavy catches.

Historically, Ama women wore nothing but a fundoshi (loincloth) and a tenugui (bandana), armed with only a floating ring attached to a net (sukari) and a shucking tool (awabi-okoshi) to shuck abalones. 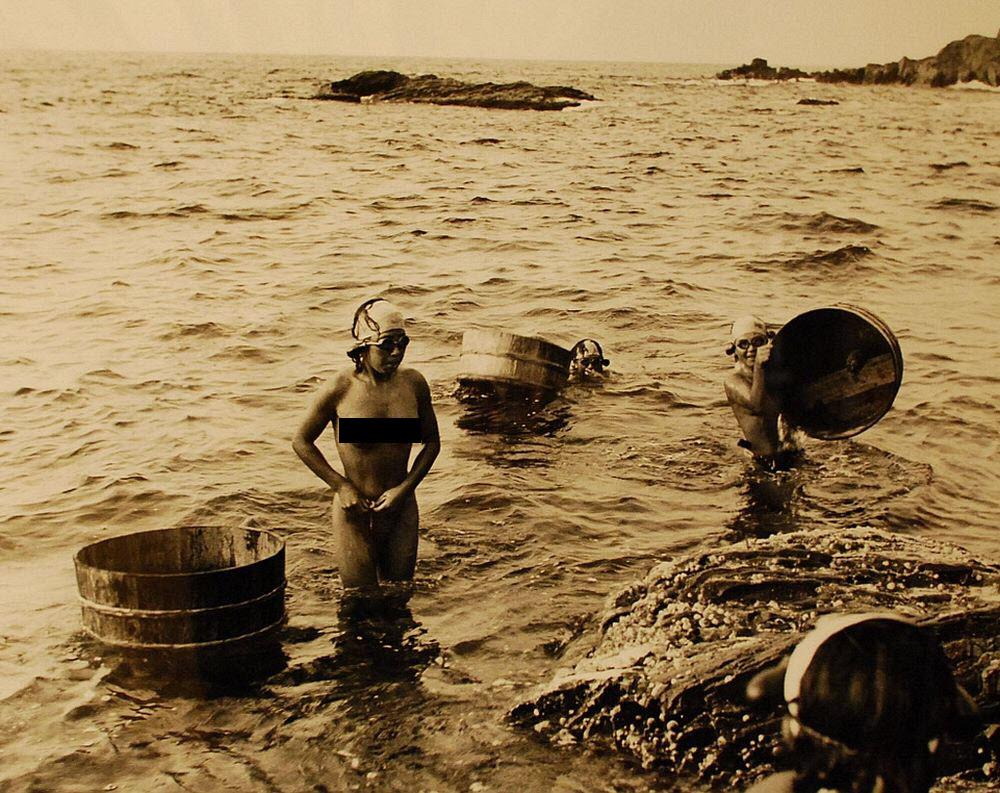 Diving naked made it easier to keep warm without wet clothes clinging onto their bodies. In Japan, showing off bodies was a pretty common practice, including communal nude baths in natural hot springs, onsen.

After World War II, Kokichi Mikimoto employed Ama for his famous pearl company but designed a white diving costume for them after noting the surprise of foreigners who observed their work. As a matter of fact, Ama began covering up as western tourists who arrived opposed their nudity. These white suits were also believed to ward off hungry sharks.

During the 1960s, these celebrated white shrouds were phased out in favor of the wetsuit – a significant compromise that allowed the Ama to continue working throughout the year in the temperate waters of the Japanese archipelago. 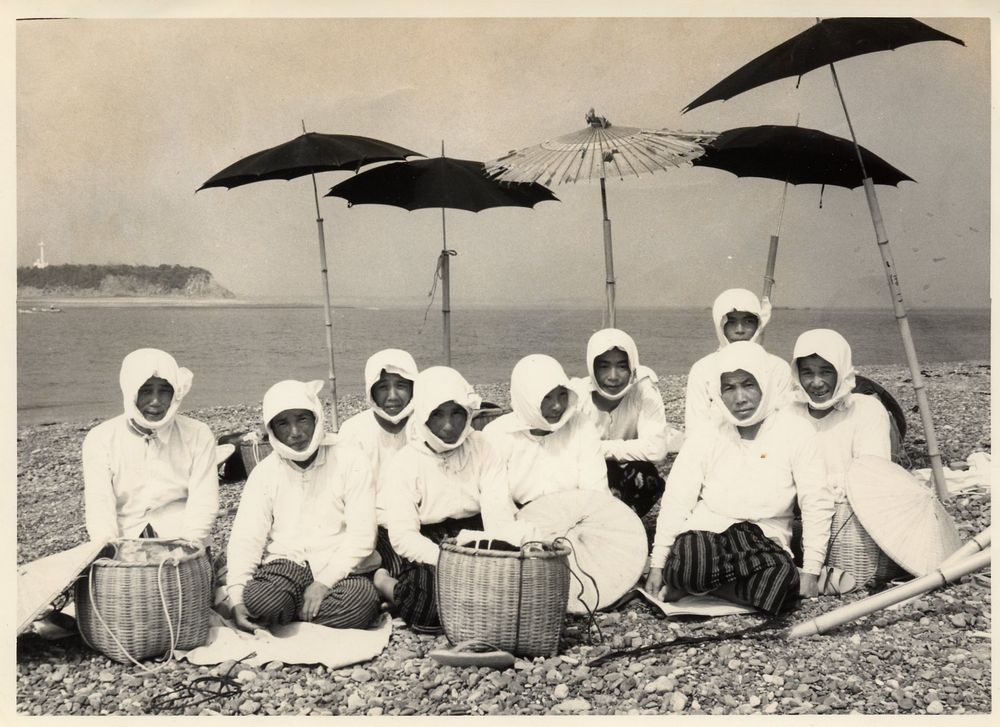 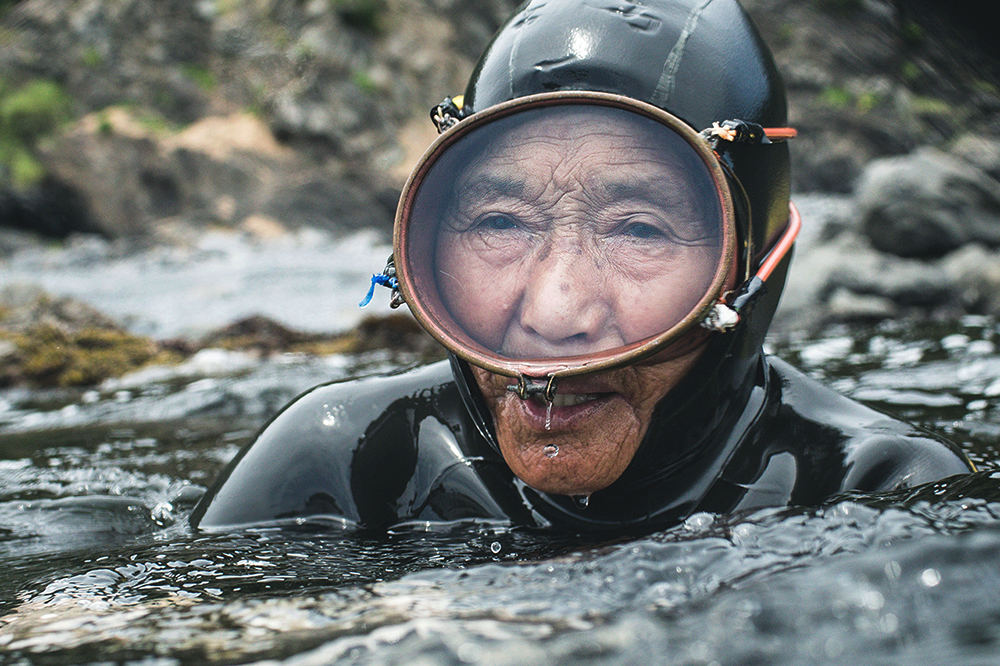 With the invention of goggles in the 19th century, the Ama was able to work faster and more efficiently. However, the goggles did create a hazard for Ama divers. As they descended beyond 10 meters, the divers experienced conjunctival bleeding, as a result of hydrostatic pressure behind the goggles.

Masks and goggles evolved accordingly and included special rubber bladders that helped balance air pressure between the lenses and the eye sockets while descending. The women also use traditional mugwort (yomogi) leaves to clean and defrost their masks.

Goggles were eventually abandoned in favor of single-lens masks that could be equalized by exhaling through the nose. In order to make deep dives on a single lung full of air, stone deadweights were used to overcome buoyancy until lead weight belts replaced them. 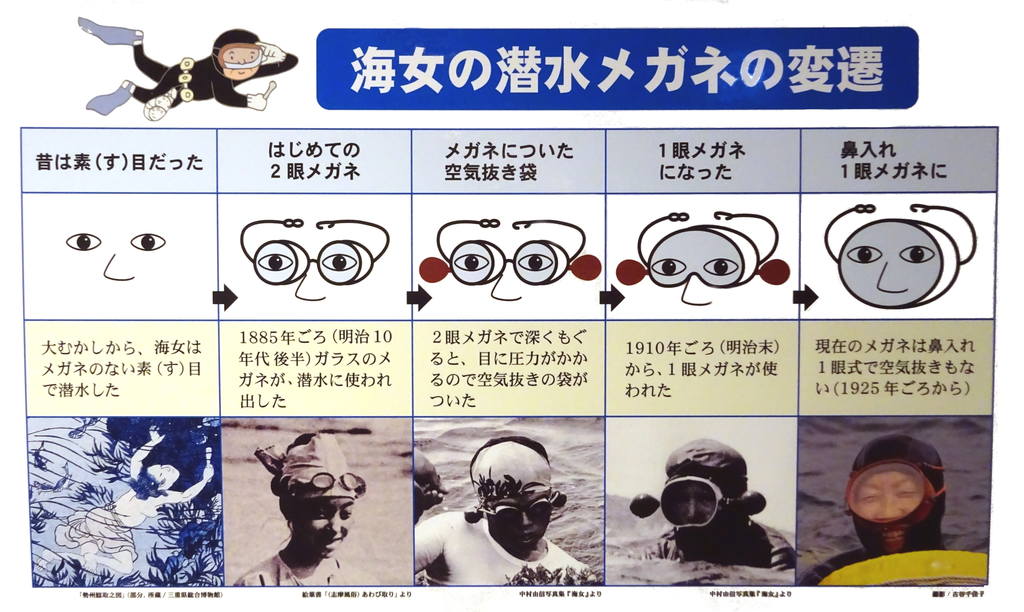 Ama fall into two general categories of diving, although the techniques and methods vary from region to region.

Firstly, the unassisted diver (oyogido or kachido) don’t use a boat and simply swim out to the diving areas close to shore. She operates from a small float at the surface. After taking several deep breaths, she swims to the bottom, collects whatever she can find, then swims up to her float again.

Due to the oxygen consumption required to swim, kachido Ama are restricted to comparatively shallow dives and a shorter period of time at the bottom. Occasionally, they may go as deep as 50 or 60 feet, however on average the foraging is limited to a depth of 15 or 20 feet. The average dive lasts about 30 seconds, of which 15 seconds is spent working on the bottom. When she surfaces on the float, she takes a deep breath for about 30 seconds, then goes for another dive. Taking this into consideration, kachido Ama typically does about 60 dives in an hour. 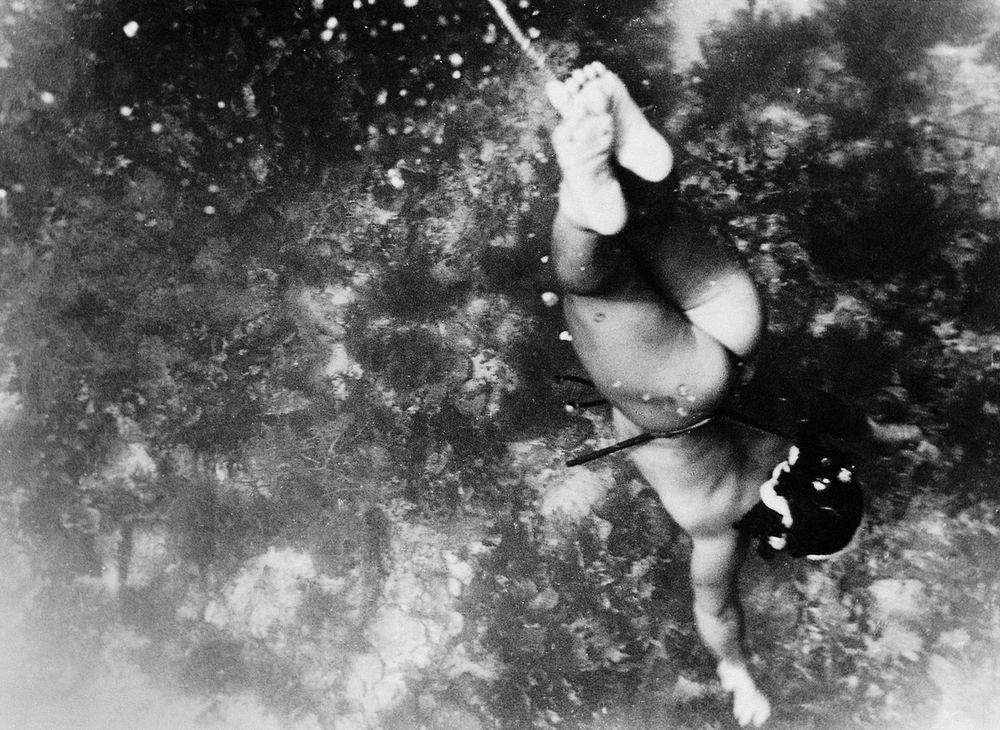 On the other hand, assisted diver (funado) Ama tends to be more experienced, as they have worked their way up. Funado Ama work with a single boatman (often their husband) and dive from a boat further from the shore, descending to depths of up to 25 metres. They hold a 15-20 kg weight attached to a rope as they descend to such depths as fast as possible.

When the funado Ama is almost out of breath and ready to ascend, she tugs on the rope around her waist and the boatman pulls her upwards with the pulley system.

Funado Ama can work at depths of 60 to 80 feet, averaging 30 seconds in gathering on the bottom, which is twice as long as the kachido Ama! Thus, funado Ama makes only about 30 dives per hour instead of 60. While kachido Ama can harvest several more times, funado Ama are able to harvest deeper bottoms.

How they do it

Coming up only for brief rests and a few breaths of air, the Ama dive repeatedly, and in warm weather, they work four hours a day, with resting intervals of an hour or so away from the water.

They breathe in a unique way to avoid damage to their lungs. Preparing for a dive, the Ama hyperventilates for 5 to 10 seconds, takes a final deep breath, and then makes the plunge. This hyperventilation serves to remove a considerable amount of carbon dioxide from the blood.

Upon rising to the surface, Ama divers make a characteristic whistle sound (isobue) as a result of hyperventilation. On expiration, they open their mouths slightly and let out a loud, low whistle. This is thought to protect their lungs and prevent excessive hyperventilation that could lead to unconsciousness. It has a very plaintive sound and was once named one of the 100 Sounds of Japan.

All Ama are said to equalise hands-free (without pinching the nose – the most commonly used masks don’t have nose pockets), using a form of Voluntary Tubal Opening (VTO), most using the soft palate / root of the tongue to push the air to the eustachian tubes and equalise.

When diving seasons begin, the life of the ama revolves around their ama huts (amagoyas). The amagoya is a simple room piled with logs and arranged around a large central fire (kamado), it’s a place to warm up before and after dives, check their equipment and to change, eat, and gossip.

Taking a Lesson from the Ama Divers 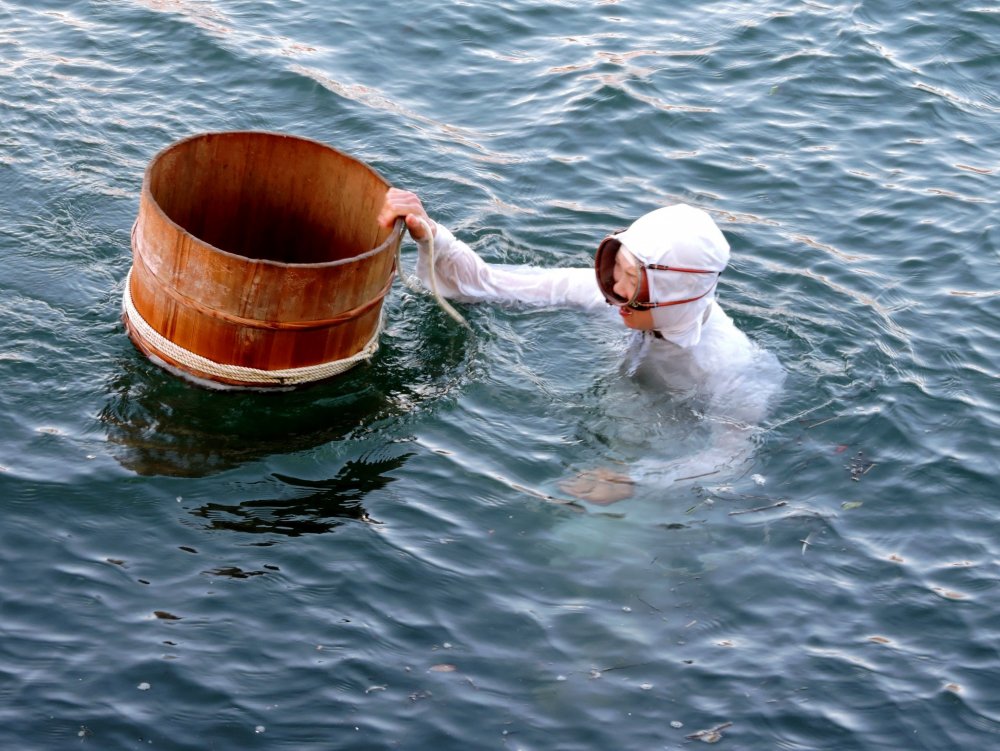 Ama divers have been carrying on their work without technology or specialized tools for diving. They have had plenty of time to develop their visual acuity, breath-hold, the ability to read ocean currents, and intuitive search skills on where to harvest to minimise the chance of injury.

Observing the types of Ama, we can conclude one thing: avoid pushing the limits of breath-holding to dive safely in the long-run.

Listen to our podcast about Ama Divers here! 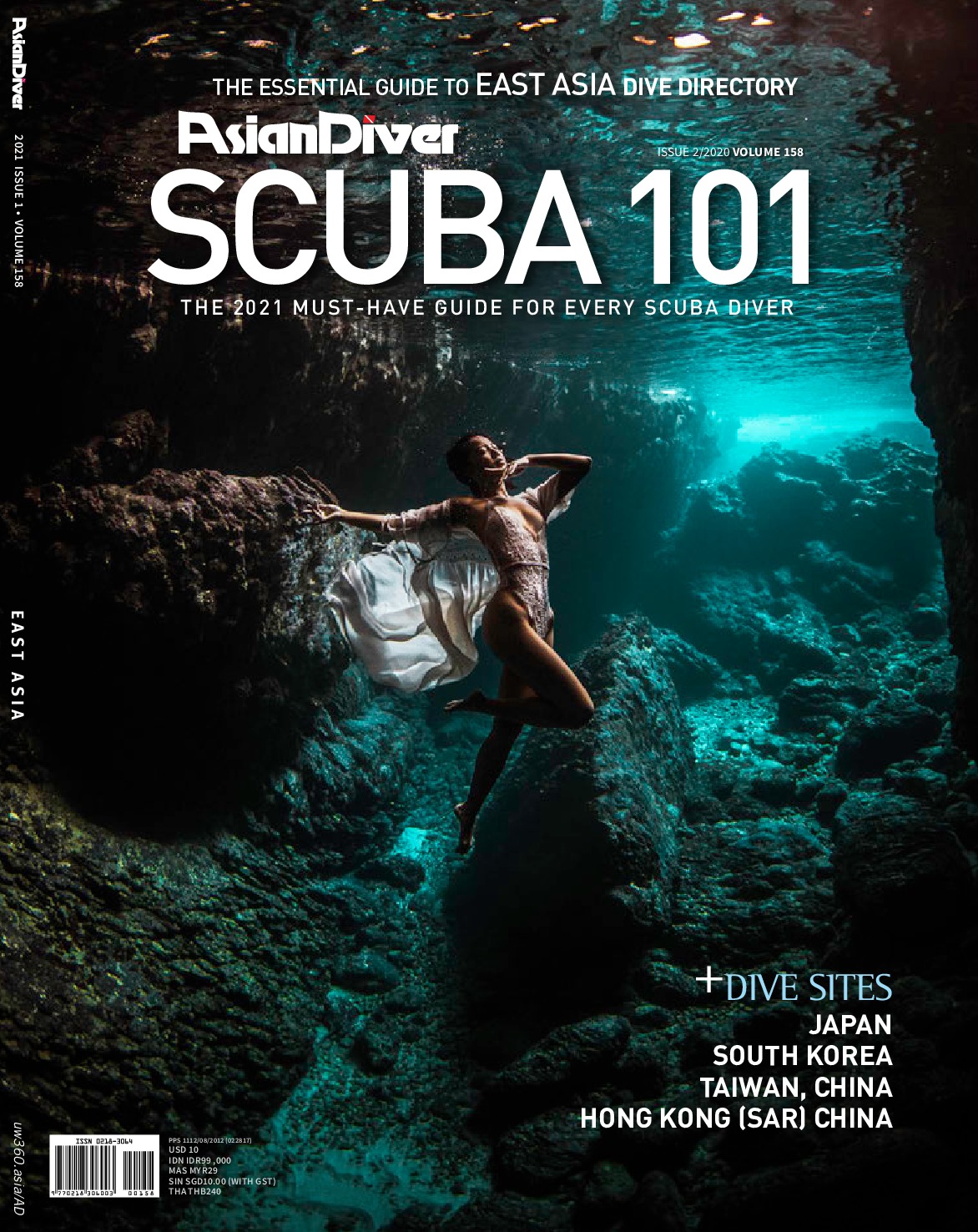 Curious to learn more about the history of the Ama divers? Check out the History of Ama Divers in Japan in Asian Diver Issue 02/2021 Vol. 158 here or download a digital copy here!  The latest issue of the AsianDiver Magazine is coming to shelves soon, reserve your copy today by emailing marketing@asiangeo.com! 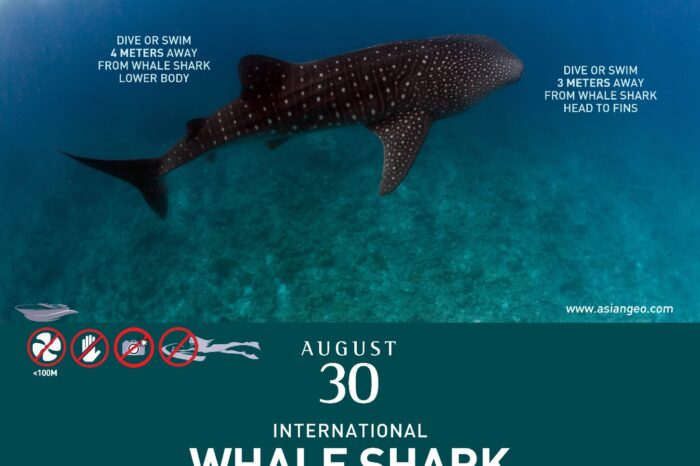 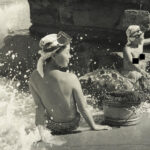