Through stormy seas and heavy rain, the spirit of the Tioman Island Clean-up continued. On the fringe of the monsoon season, the UW360 team stood alongside like-minded divers keen to do their bit to help the surrounding coral reefs. With over 120 divers, from Singapore and Malaysia, the island shallows were filled with people collecting rubbish, planting coral, and meddling with reef-destroying crown-of-thorns starfish.

Held at Berjaya Tioman Resort, the Tioman Island Clean-Up Day (TICD) took place from October 21-23. Representatives from key players in the industry turned up to show their support for the event, from Singapore-based Scuba People, to Reef Check and Shark Savers. The annual event started in 2010, and has continued to grow – with each year creating new sustainable projects to help “give back” to the ocean.

“The objective of TICD is to raise public awareness on the importance of conserving the island’s marine environment,” stated Mr Sonny Gan, the General Manager of Berjaya Tioman Resort. “We believe that TICD unites everyone in one place to give back as much as possible.”

Last year, over 60 concrete pipes were laid down on the seabed to provide new homes for marine species. This year, six units of coral nursery table were fastened down to encourage the productivity of the corals. There were also other projects that happened around the island – all in the name of conservation.

Roughly one-quarter of coral reefs worldwide are already considered damaged beyond repair, with another two-thirds under serious threat. It’s small events like the Tioman Reef Clean-Up, that give corals a fighting chance as they try to survive the vastly changing oceans.

To start, we were given a short briefing and demonstration on how to lay the artificial coral nursery tables: Big structures shaped like dining tables, with wire mesh on top for securing corals. The tables had to be carried out by a team of five divers, and then hammered down by a mallet and held by long iron pegs. Of course, hammering underwater when your sight is filled with sand, and when you’re hoping not to slam your own finger, is challenging – we consumed a great deal of air just trying to get the structures to sit tight. 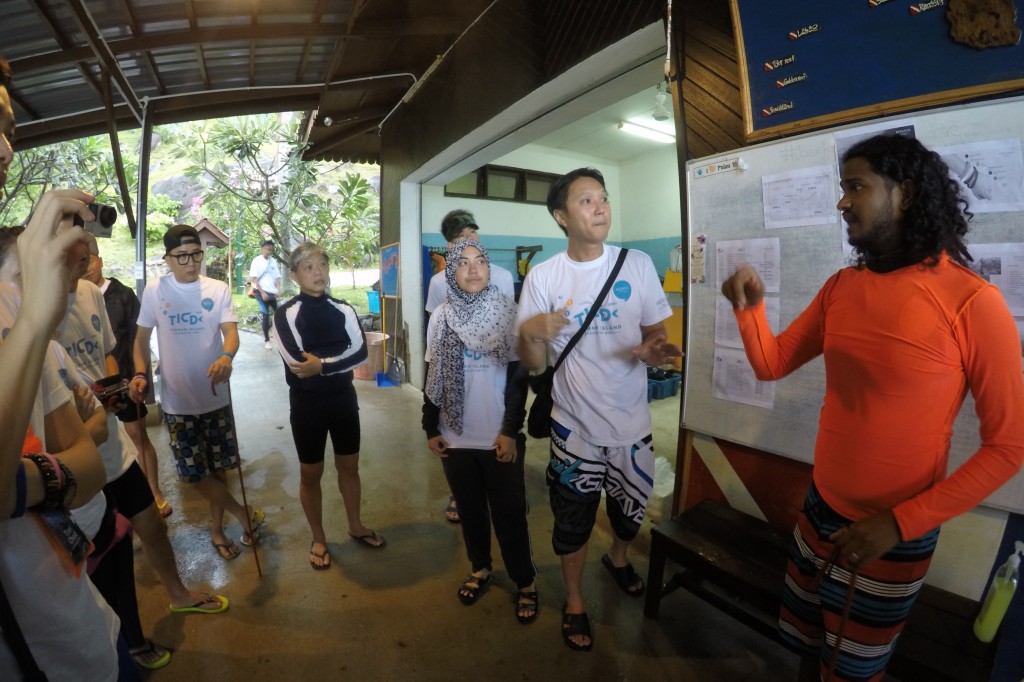 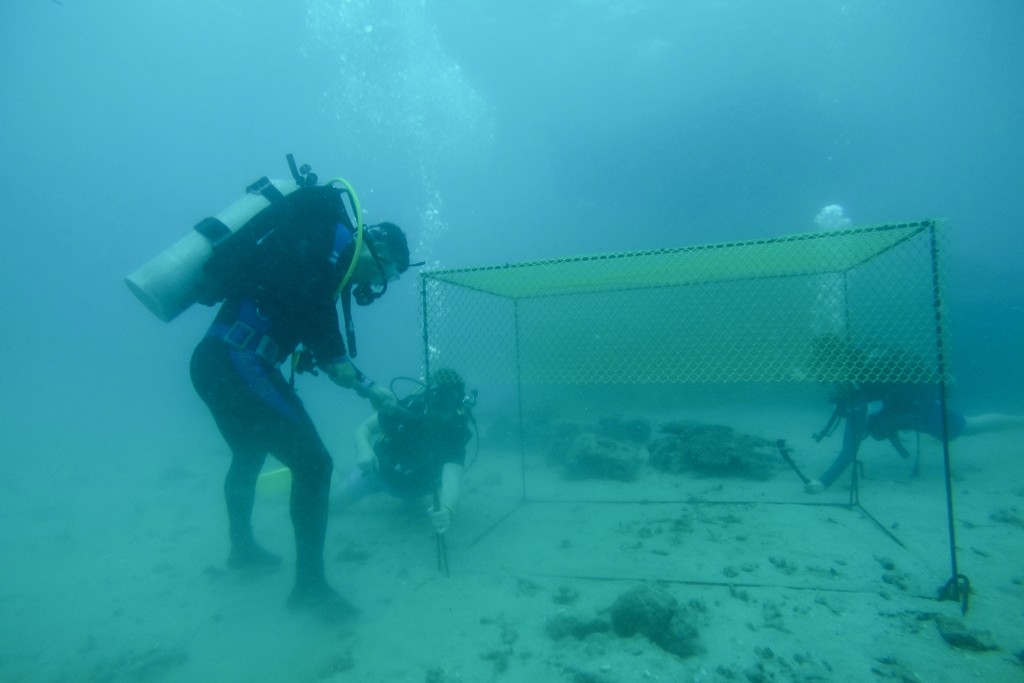 “Hammering underwater when your sight is filled with sand, and when you’re hoping not to slam your own finger, is challenging.” © Justin Ong

After, we shore-dived back into the water with baskets, wire cutters and cable ties. The baskets were for collecting coral, and we had been challenged to collect 20 per pair. Searching for “the correct” coral on the seabed is difficult – it can’t be white or brown, has to be roughly the size of the palm of your hand, and if you give it a wiggle and it doesn’t move, leave it there. So we spent a good half an hour “wiggling” palm-sized coral, hoping to fill our basket up, which was becoming increasingly heavy from the specimens.

We were searching for isolated coral. Coral lost on the seabed and with little hope of surviving unless transferred someplace else. In a way it felt strange to hand-hold coral, textures I had previously been forbidden to touch for fear of damaging its outer shell with my “potent” oily hands – but if we didn’t move this coral, it was going to die. And so we did, carrying it all back to the coral tables to start the next stage of the coral planting. 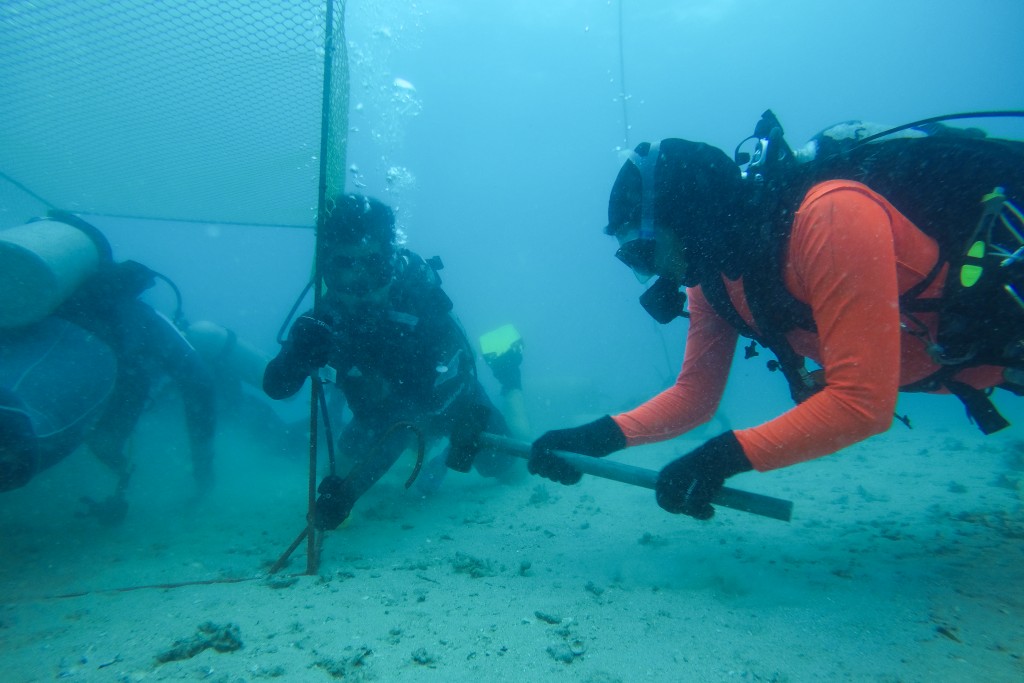 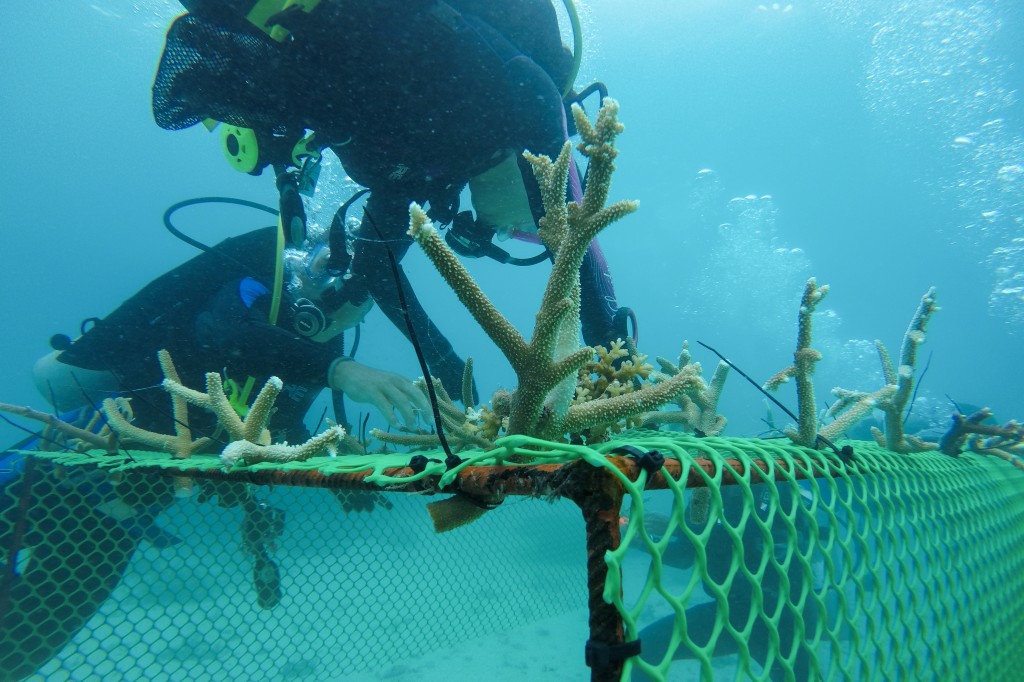 “To fasten the coral to the coral-table, you have to use a cable tie – fasten it down tight, so that no current can sweep it away.” © Justin Ong

To fasten the coral to the coral-table, you have to use a cable tie – fasten it down tight, so that no current can sweep it away. The wire cutter is then used to cut off any excess cables that may catch harmful algae. After the finishing touches are complete, the previously empty coral table is now full of palm-sized coral pieces that will – hopefully – begin to flourish and attract reef life.

In our diving group were representatives of Scuba People, who had supported and dived the previous year’s project. This year, they re-dived the site to see how the coral was coping and whether life had already started to congregate on the structures. It was healthy, and it was on its way to becoming a coral garden – of course, it takes time. 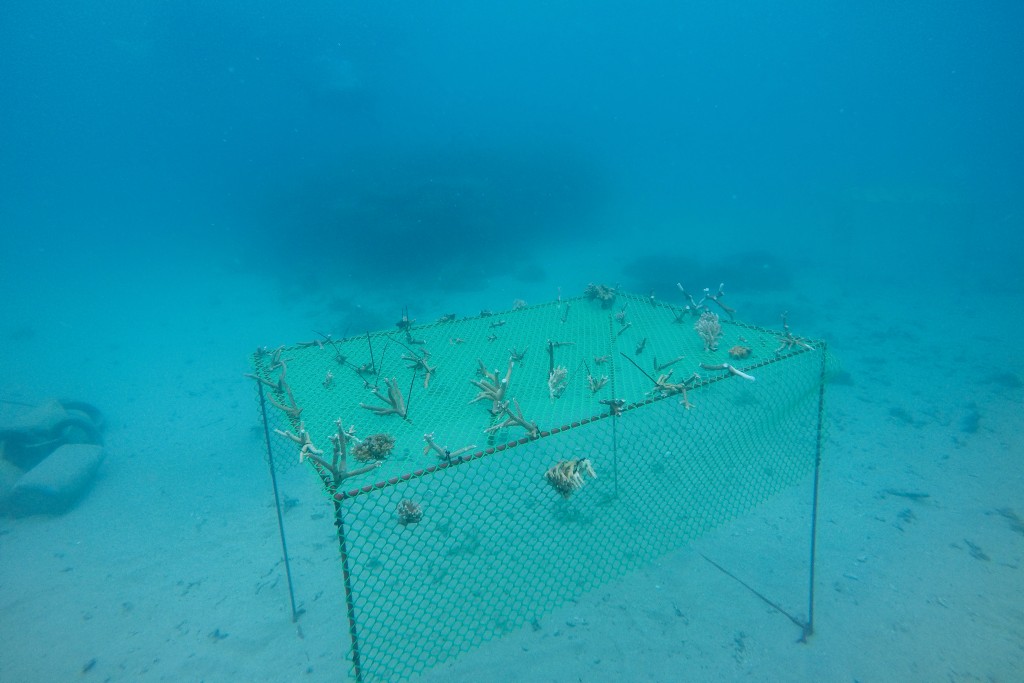 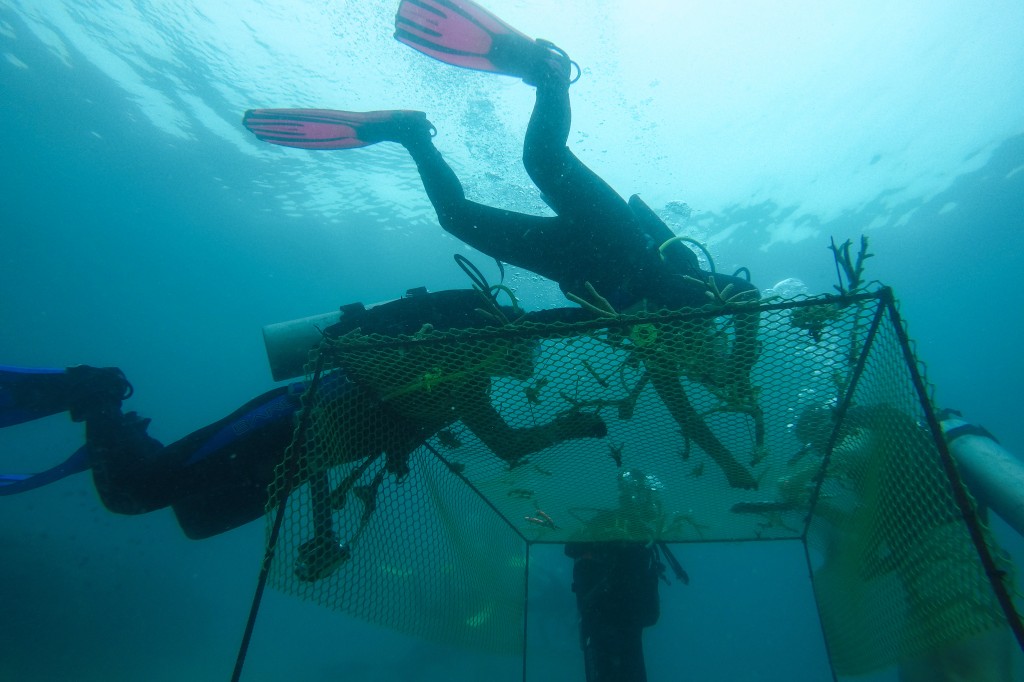 “After the finishing touches are complete, the previously empty coral table is now full of palm-sized coral pieces that will – hopefully – begin to flourish and attract reef life.” © Justin Ong

With so many like-minded people getting involved with the project, it was refreshing to see how an awareness for conservation was growing in Malaysia. After the diving, selected speakers gave presentations on aspects of marine biology and sustainable living. Jonn Lu, director of Shark Savers in Asia, spoke about the current concerns facing sharks, whilst the president of the Singapore Underwater Federation, Song Shing Hae, gave an opening speech welcoming people to the event.

The weekend was a pure example of what people can do when they get together and get their hands wet. Conservation is fun, and it teaches you so much about our oceans and the creatures in it. Berjaya Resort, along with Scuba People, brought a like-minded community together, and in turn helped rebuild an ecosystem.

Berjaya Tioman Resort is situated on Tioman Island, off the east coast in the state of Pahang, Malaysia. Providing a haven from bustling city life, it captures the hearts of many with its traditional Malay-styled chalets set amidst miles of palm-fringed beaches, clear waters and misty mountains. As the island’s only premier resort, Berjaya Tioman Resort offers exclusive chalet-style accommodation and an 18-hole golf course sprawled over 208 acres of tropical rainforest. With its surrounding waters rich with marine life, dive enthusiasts can look forward to wondrous underwater adventures, especially with the resort’s 5-star PADI Gold Palm Instructor Development Centre facilitating diving sessions. Besides the fun-filled land and sea activities, Ayura Spa at Berjaya Tioman Resort presents an array of spa treatments for mind and soul revitalisation. Visit online at www.berjayahotel.com/tioman for more information.

ScubaPeople was established in 2001 with a commitment to provide
quality scuba diving education and pleasant dive holidays for all. From its humble beginnings as a small dive centre located in River Valley Swimming Complex, ScubaPeople has grown from strength to strength over the past 10 years since its establishment.

Situated in Chinatown, the heart of Singapore, ScubaPeople is now an SDI (Scuba Diving International) 5-star and PADI (Professional Association of Diving Instructors) dive centre which has a database of more than 2000 certified scuba divers. With a combined experience of more than 20 years of scuba diving, our instructors are certified to conduct dive courses under both PADI and SDI syllabuses. ScubaPeople is also a travel agent licensed by the Singapore Tourism Board (TA License No.: 02135) to organise and plan overseas holidays. 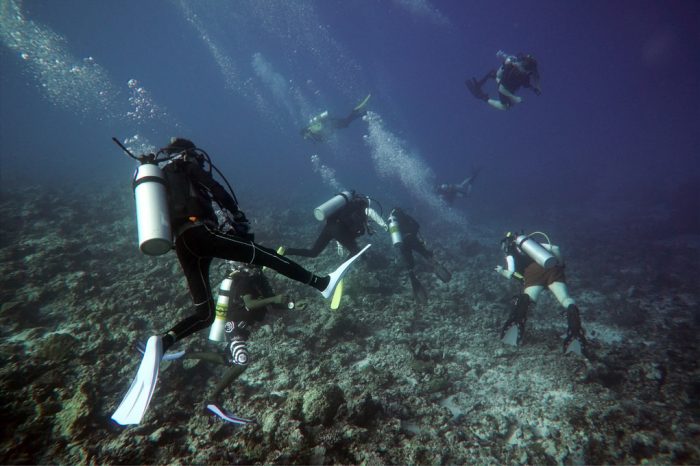 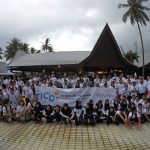